As I ran the gauntlet through the crowds of drinkers lining the walls of the Stratford Alehouse ('the only place worth drinkin' in town'), got my elbows in at the bar, and told the tired fleecey landlord "I'll have a pint of the Whatever", I could congratulate myself on having reached my 53rd BRAPA pub of the month. 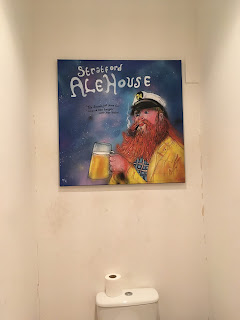 A 2019 record eclipsing the 'Dorset 52' (didn't they get wrongly sent down for the murder of a farmer back in the 70's?) back in February.  And I was all the more pleased because that doesn't include a record 9 preemptives, though some of them I admit I'll be surprised to see in the GBG any time soon (cough, cough, Royal Children Nottingham, cough cough).

October had been a vintage month, and blog wise, I'm still only halfway through writing it up, stuck in Cumbria somewhere.  The July-September period contained too many controversies, so it was nice to get back some nice normal high volumed goodness, away from the weirdness, though it did have its moments.......

Story of the Month

What seemed at first glance, a pretty uneventful dull night completing Denby Dale's boring new GBG entrant turned crazy when I returned home to find my Good Beer Guide missing.  This was on Friday 4th, and with the pubs and station lost property offices having no clue, I was forced to admit an evil new upstart rival had nicked it to stymie my progress.

I was balls deep in my Cumbrian adventure on 15th, when it finally turned up on Facebook!  Yes, a lovely man called Martin (aren't they all?) had done a Facebook appeal .......

Modest Martin told me most of the credit should go to his partner's daughter Nicole, who despite thinking everyone who drinks beer is a dick (this is where I should do a stern piece on the Media demonising drink to youngsters in this modern age), she rescued it (it had spent the night on Denby Dale Station), Martin saw the importance of it (let's not mention the missing brewery section and laminated Isle of Man back page shall we?) and a week later, 22nd, it arrived back in York.  We could make a film.

'Papa?  Nicole?' (as my friend said), but with less Renault Clio's and Reeves & Mortimer.  'Twas a happy ending, and when the BRAPA annals are written, it will get a full chapter.   They both received their reward in the post, though the signed photo of Tom Irvin is on hold for now, though he believes we should deliver on that promise.  Nicole especially will be thrilled.  In fact, she later sent me a link of a local preemptive I should visit.  Converted to love 'beer people'?

With 53 pubs done, there were bound to be some classics.  Oh, and some utter shite.  Most fell somewhere in between, edging on the good/very good side and the standard in the Lake District in particular surprised me despite a few annoying 'tourist' pubs.

I thought there was something extra magical in the air about all three.

Dire pubs, all three, especially the first two, the third wins award for most miserable pub of 2019 so far.

On the Micropub front, special commendations to Little Green Dragon in Winchmore Hill and Tom Pudding in Goole for both showing how it should be done, special dishonourable mention to Market Tap in Pocklington for failing to be open despite everything suggesting they should be. Friday 12 noon, busy market place, sunny day?  Disgrace. 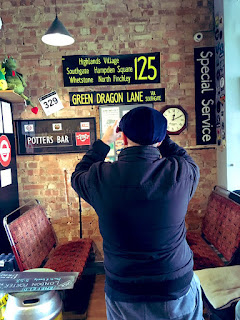 Alongside retrieving my GBG and my Cumbrian holiday, a day in Stockport never let's you down and this year, it was better than ever as I got to meet so many Twitterers, pub legends, and all six pubs including the preemptive Angel were all strong.  Pub Curmudgeon even got off his deathbed to try and kill a plant in the Magnet.  Looking forward to writing up that day.

Not that I'm likely to forget, but you might.

It all kicks off BRAPA-wise with a Saturday trip down to London.  It isn't a football day, it isn't even an NFFD (Non Football Football Day) but we will be in the area, catching up with Dad's friend Eddie.  You may remember his starring BRAPA role from the Anglesea Arms in South Kensington a few years back when he half-edited some nudie artwork ...... 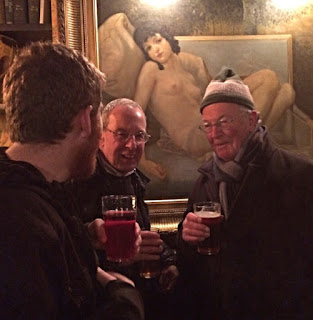 Not sure what he'll want to do yet, but gonna try and point it in a BRAPerly direction.

A week later, I might end up back in London.  You see, my heart is screaming "crack on with Cumbria" but my head is telling me I have one remaining freebie ticket to use by 31st Dec and with my other free weekends being in 'silly season', it seems prudent to use it sooner rather than later.

November is a particularly good month for Father BRAPA, featuring on all of the next 3 Saturdays, most notably the 23rd, our official Hull City day of the month, or I should say NFFD.  Tom Irvin is pulling the strings in mysterious West Midlands hot spots.  Again, I need to look at the GBG to make sure we have some kind of structure around it, NOT that I don't trust him or anything!

And on 30th, we might get to meet another Twitter legend Brad Wight, as Dad and I travel to his homeland.  My aim, as with Cumbria, is to finish County Durham by Sept 2020.

I will try to get back to Friday's in West Yorkshire too, but I want to get a bit more caught up with the blogs first cos being over 2 weeks behind is stressing me out!  My target is to eclipse the modest 31 pub record I set last year, which should be achievable despite no holiday from work.

Early release tonight, as I've got Hallowe'en fun to have.  Don't let anyone contaminate your extreme murk with an eyeball (or raspberry!) 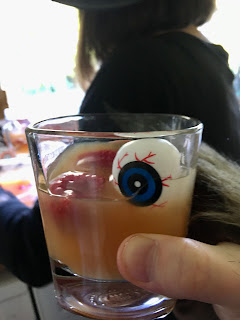