As it becomes increasingly more apparent that my original Good Beer Guide is never coming back, I'd like to thank a Mrs Rooney for suggesting that a certain Rebekah Vardy is the likely culprit.  Top sleuthing Coleen, your Tom Irvin signed photo is on the way, it'll look nice on the mantelpiece alongside your husband's trophies.

Half way through Saturday afternoon, and I had left one 'Spoons and was bound for another, as is de rigueur in the North London pub ticking game.

I hopped back off the train at Ally Pally, and picked up a rather pointless bus which dropped me at the bottom of a hill called Muswell.  Muswell Hill is one of those places everyone has heard of, but no one has been to, a bit like Dukinfield, mainly because it is such a steep climb.  You could take a better bus than I did, but nice to experience exhausting local custom.

By the time the 'Spoons peered out from over a hedge like a peeping tom (not Irvin), I had a thirst that needed some serious slaking.


A bit like the back half of the Railway Bell in Barnet, Mossy Well, Muswell Hill (1567 / 2784) had a light, airy, modern conservatory feel to it.  In Barnet, you could hide in the old skool front, but here, there were no hiding places and I always feel calmer and more assured when my 'Spoons are so dark, no one can see your face.  The people too were a bit more 'cultured', in a fizzy Icelandic yoghurt kind of way, a bunch of curios resembling Victorian butterfly collectors or primary school art technicians.  I enjoyed a pint of Scorcher by Truman's at an extortionate £2.39 less 50p, which took me a shamefully long time to calculate.  Sitting on a posing stool in the centre of the room helped me realise the place needed an injection of life, so thanks to our heroine in full Little Mermaid costume for providing it.  She was soon turning old men's heads like a scene from the exorcist and the poor lady couldn't get to the bar as strangers kept stopping her to pass comment.  "You can 'Flounder' with me honey" "Let's catch crabs together babe, I'll be your Sebastian" and "I'll go 'Under the Sea' with you dahlin'" are just some of the comments the locals probably made.  Sexist filth.   She spoilt it a bit by quickly joining the smokers outside, never thought I'd see a mermaid smoking and I see a lot of things in this BRAPA game.  I've not included the photo on SiWokeness2019 grounds, yet this Ariel brightened up the place.   An okay 'Spoons, but worth the uphill walk?  Not unless you are a pub ticker or a local in need of exercise.


And I really was 'floundering' without my GBG as I couldn't think of any more NE London pubs I needed to do, so halfway down the hill, I caught a bus to Finsbury Park and back into the scary Saturday afternoon hub of Central London.

Bit of a BRAPA throwback, you have to go back to my Berks & Bucks ticking days of 2016/17 for me to do chaotic tourist pubs at this time.  Never a good idea, as I found when I fought my way out of Covent Garden to a pub hidden down an alleyway ...... 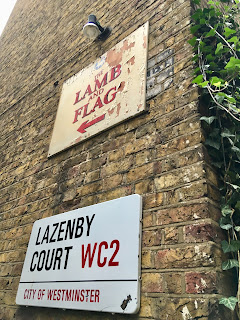 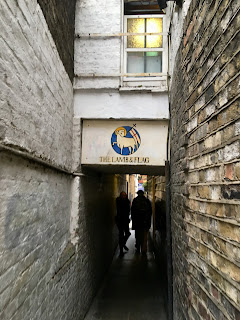 Wholly unsurprising to find a tiny bar area buzzing with folk, three deep at least at Lamb & Flag, Covent Garden (1568  / 2785) - I bet Charles Dickens and Karl Marx never found such a chaotic atmosphere when they were regulars here, but you could tell it could have been a classic dark wood panelled Fullers effort had I chosen my visiting time a bit more carefully, grade II listed n all that.  A crowd swell actually pushed me into the gents, not the plan, but not a bad idea, never miss an opportunity to pee when it is presented to you on a plate!  I splashed my face with cold water, took a deep breath, and headed back into 'battle', using all my experience to find a tiny gap at the end of a pillar between three blokes who'd just completed their order.  Barman was alive to the situation, everyone else fannying around like tourist fannies, and I was in, never expected it to be that quick.  My elation was short lived.  "OI, CAREFUL MATE" growled an angry Scottish voice behind me.  I turned around and gave him a theatrical look of comic puzzlement.  "YE RUCKSACK COULDDA HAD MI PINT OUTTA MY HAND!" he spat, his breath a heady mixture of offal, shortbread and heroin.  I apologised and turned back around to complete my order, rolling my eyes at the two nearest guys.  One, a cockney who seemed like a Jewish costermonger & Gerry Francis at the same time comments "Gorrrr, bit of an overreaction, he acted loike your rucksack had a mind of its own!"  As I reversed out into the courtyard, I warned everyone to beware of my rucksack and an American with a peaked cap laughed hysterically.  I don't think he got the joke, he was just delighted to be in Ye Olde British Pub.  It was almost as manic outside, I kept my head down in case the Scot reappeared, but despite being by the bins, I enjoyed my pint of Dark Star Hophead as much as I've enjoyed this ale in years, so that was something I guess! 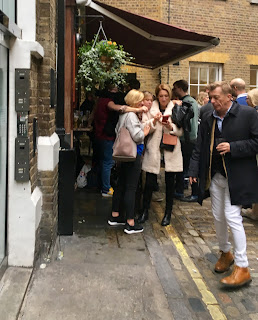 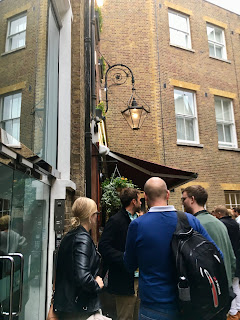 I didn't envisage it being so difficult to get to a sixth and final pub of the day, yet it was, despite having a few Central London options available to me.

First I started heading towards one called Knights Templar on Chancery Lane (about a mile walk) but then I remembered it closed 6:30pm, and it was 6 already so thought it might be risky.

Then I got distracted by a Waterstones, popped in thinking it might be a good time to buy my replacement GBG, but then remembered I had money off vouchers back in York so abandoned the idea.

Then back on the Tube, there was a temporary line closure causing chaos so I had to rethink, got back to King's Cross on a different line, and changed one stop for Farringdon, where one of my two Hoops and Grapesies was just a short walk on Farringdon Street.

On the way, Google Maps screamed "PUB PROBABLY CLOSED AT THIS TIME!" and my heart sank (not what the GBG App said!), but a light was on, a door almost open. 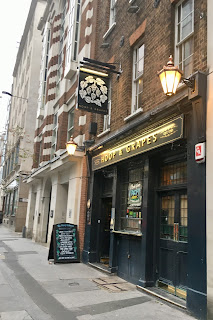 So I gingerly step inside Hoop & Grapes (1569 / 2786) , I'm the only customer which is quite a culture shock in itself after the last pub, and our custodian is in a nook facing the window with his bottom sticking out at a weird angle.  "Errrrm, are you open?" I ask, and not wanting to sound silly, add "I mean, I can SEE you are but Google said you might be closed at this time".  He replies "Well, I can't control Google" and I didn't really have a comeback to that comment, so laugh nervously and order a beer, which was confusing in itself because in 2019, there now seems to be two different 'flavours' of Spitfire which I'd never realised before, so I go for the one on the right simply because I'm right handed.  He serves me, I face one wall, he goes back to exactly his same odd posture as before, and Crystal Palace v West Ham blares out on TalkSport.  I suspect this place might be residential, as two blokes appear from nowhere, have a swift half, enquire about food and bugger off.  Then the guv'nor makes his own evening meal, sits in the middle of the pub and eats it, like a guy 100% confident he's going to get zero customers despite being in the centre of London.  Strange way to end the day's ticking!

I thought it was a race against time to get back for my train up North, but you can forget how easy Farringdon is for King's Cross so ended up having a swift blurry half of London Pride in the Parcel Yard which has been on better form this past year or two, beerwise...... 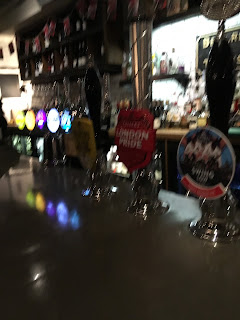 Then a nice jolly train journey back north, avoiding a scary double whammy of Tom & Newark.  All in all, GBG problems aside, a good day.

I'm now up to date with my blogs (I won't say that again for a long time) just in time for my BRAPA Autumn Holiday so if you're on my Twitter, keep an eye on my crazy pubbing over the next nine or ten days!