BRAPA and ..... No. 9 and Feeling Fine on the Barley Wine (Cumbrian Adventures III Pt 4)

Sunday morning in Cumbria was a wet one, reminiscent of Ulverston two weeks ago today.  I was back in the heart of the Lakes, knowing that Sunday bus services prevented me from doing anything too adventurous.

Premier Inn breakfast chaos meant no tables were available (except it seemed to be more about a staff shortage when they were pressed on the issue!) , I didn't have time to wait, so had to go to MaccyD's and slum it like the commoners....... 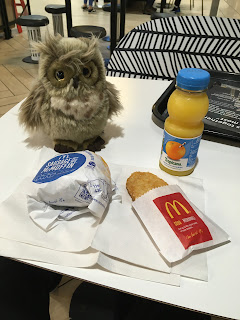 Tucked away around the corner from Ambleside, where I'd finished Saturday, was the Bluebirdtastic tourist-friendly (aren't they all?) village of Coniston, which with THREE ticks, was  BRAPA friendly too.  The bus journey was a 'mare, I found myself breathing in constantly as we tried to negotiate bulky drivers, twampervans and other anti-social wide transport on these narrow lanes.

Such was the location that being in Coniston felt a bit like being a ball in a table fussball game which had got trapped in the corner, and needed the table lifting to 'bring it back into play'.

I squinted through the rain, over a bridge and what they call a babbling brook to see the first pub, behaving like all good tourist pubs, being open before 11am even on a wet Sunday in October. 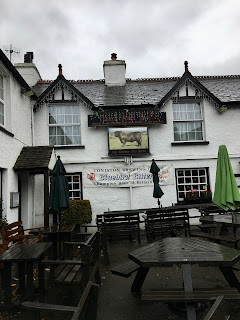 First customer of the day at the Black Bull Inn & Hotel (1579 / 2796), immediately throwing the staff into turmoil by ordering a stout and confirming I had not booked for lunch, nor would I had be planning on eating.  I was put on a mental watchlist, and they got their own back by charging a London-esque £4.60 for the 4.5% pint!  People told me I'd have to expect such prices in the Lakes, but this was the first time I'd baulked at the price, so far at least.  Good chirpy banter amongst the staff, and whether it was the potential floods or Brexit, they spent the next five minutes debating the need to stock up on toilet rolls in genuinely concerned tones.  This was a real 'pub of two halves' experience for me.  This first 15 minutes in near solitude, in front of a roaring fire in this cosy atmospheric pub with deep red carpets, low beams and a load of CAMRA awards on the walls speaking for itself.  Martin the Owl hadn't really featured too prominently on this holiday so far, but he was the owl equivalent of a pig in shit (an owl in pellets?) in here.  But as we moved into the second half, southern murmurings like "we've booked for lunch but we're a bit early, can we 'av a drink?" filled the room, followed by an onslaught of twild activity, Grannies wanting to know where the bogs were and bald speccy men with rucksacks making jokes about their tackle being out of control..  I was finishing my stout at just the right time.  Great pub though. 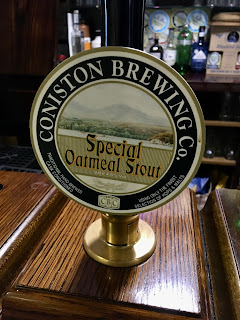 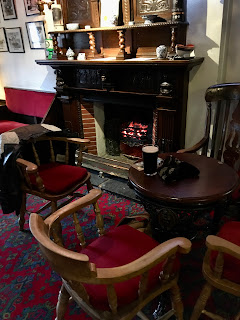 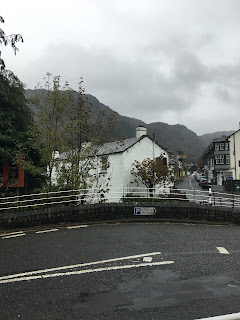 I said farewell to the pub (above) crossing the bridge and uphill to a pub reassuringly off-centre which looked beautifully autumnal. 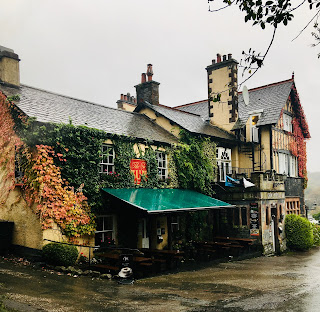 A low-key shout for my 'pub of the holiday' was here, at the Sun (1580 / 2797), and I had to fathom out a tricky latch which gave way to a pleasing farmhouse style pub, aloof and sneering down at touristy central Coniston from a high-up location.  No surprise then, that my arrival was greeted with a tired wariness, the only drinker was a farmer in his wellies and he glared at me as if to say "this is a local pub for local people".  I wondered if he was this 'Old Man of Coniston' I keep hearing about.....  But five and a half years of BRAPA and I've developed a thicker skin to slight hostility, providing the pub is good, and the smell of the coal fire in the corner, old warped beams and slate floors told me this was indeed the case.  The young square jawed barman wasn't much better, but I took my pint to the fireside and drank in the atmosphere, setting my expression to 'won't be phased by grumpy buggers'.  I had a slight feeling I was being watched, and looked up to see another grump looking at me through the staircase.  The pub cat!  On a holiday of far too many dogs, to see a solitary cat was music to my ears, cementing this pub in my eyes as one of the best I visited this week.


I carefully descended the hill back into central Coniston, trying not to slip on the wet leaves and just about staying upright.  With the rain still coming down, the babbling brook was babbling away like the office gossip....... 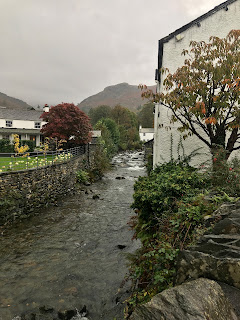 The third and final Coniston tick was just across the road from the Black Bull ........ 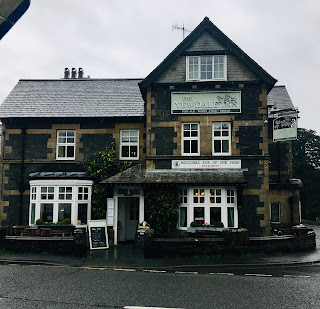 But the spell of Coniston gloriousness was broken here at the Yewdale Inn (1581 / 2798), easily the weakest of the trio.  There was no stout in front of the fire, but it was a lot worse than that.   To some extent, it can be blamed on a group of about eight multi-generational walkers, who had commandeered the main back room, draping their wet coats over tables and chairs which they were even sat at, their two wet dogs drying out on dirty wet towels they'd splayed across the floor.  It was the ultimate in selfish pub behaviour.  Furthermore, the two young ladies had just beaten me to the bar and were engaged in a food order so elaborate, the solitary local woman sat at the bar to my right was rolling her eyes and looking physically in pain as the order escalated!  I tried to make eye contact with her for unity's sake, but this was a miserable pub anyway, lacking the atmosphere of the Black Bull and the Sun.  When one of the ladies adds "can I have cheese on the top of that?" at the end of the order, my first instinct was that she was taking the piss out of herself, knowing how convoluted things had become, but not a bit of it, the cheese was a serious unemotional demand.  No wonder when it was finally my turn to order, I said "I JUST WANT A PINT OF TAG LAG AND THAT IS IT!" to try and prove a point, but no one cared.  Staff were robotic, here to serve the tourist.  I moved seats from back room to the raised area facing the bar.  Sad for my Mum and Dad that on their recent trip to Coniston, this was the pub they chose at random - they thought it was fucking bullshit too (not a direct quote). 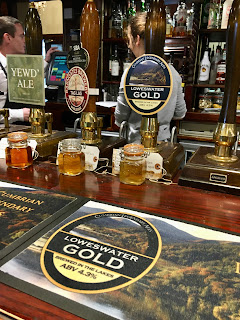 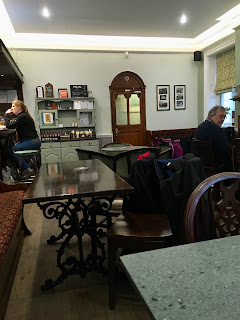 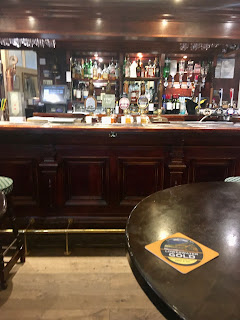 So, without wanting to absolve myself of responsibility for my actions (well, maybe a bit), a combination of factors lead to my next decision.  It seemed like a great idea at the time, but with hindsight, probably wasn't.

Sunday bus services meant I still had the best part of an hour to wait for the bus.  My soul would die if I had to stay in the Yewdale for another hour.  And over on Twitter, Brad Wight was excited to hear that the 8.5% Coniston No 9 Barley Wine was available on draught over the road at the Black Bull.

Oh dear, so I returned to the Black Bull, the lunch crowd were just starting to disperse, the rain was easing off, and the staff were at their personable best as I asked for a pint of it.  The lovely bald beardo didn't really bat an eyelid, apart from confessing that although it seemed bad that he was charging me £8.10 for the privilege, it was "like ordering two pints in one" and that I should view it like that.  Hmmmm, easier said than done when you have a BRAPA agenda to complete! 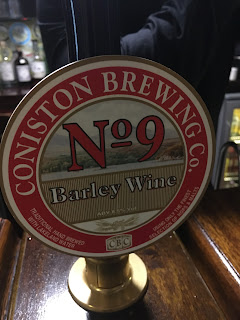 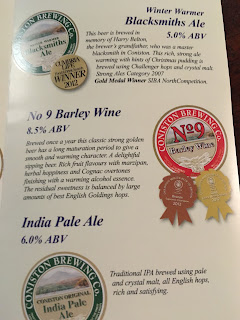 Well, even just a third of the way down I could feel my head spinning, but I powered on through, pausing occasionally to make a series of theatrical facial expressions and telling a group of oldies from Yorkshire what I was drinking, whether they cared or not, which they didn't.  Over on Twitter, Sir Quinno told me to stop acting like a martyr.  He had a point.

Then I walked around the pub for no apparent reason, leaving Martin the Owl to guard my drink, then the bus was due which took me to Hawkshead, wherever that is.  I staggered towards it, I think there were two of them, I hopped on both, and I'll tell you what I can remember about that in part 5.