Despite Sunday's 8.5% fuelled barley wine adventure (which I've decided I don't like to talk about so will probably only mention a hundred more times), I was sufficiently recovered on the Monday morning to 'go again', as Steve Bruce might say.

Yes, bouncebackability is a key trait of the successful pub ticker, and it is important that no matter how much you caned it the day before, you finished early, ate plenty, rehydrated and slept well.  Just so you can do it all over again!  What a life.

Kendal Premier Inn had managed to get its shit together finally re breakfast, well to an extent, and after a 25 minute wait for someone to take my order, I worked out I could just about make the bus if I wolfed down that last Quorn sausage and ran like a demon.

Destination uno was Barngates, alluding me the previous day on account of lack of discipline brought on my the 8.5% Barley Wine I don't like to mention, but a bus stop lady had told me Outgate Inn was the best place for me to 'alight' at, about the only detail I remember of the 'late afternoon period'.

And the old dear wasn't wrong!  A near 20 minute walk only, and that was with my sauntering step.  I was even too early for 11:30am opening.  Oh well, at least some fresh air and breathtaking views you can't do justice on a Smartphone restored me further. 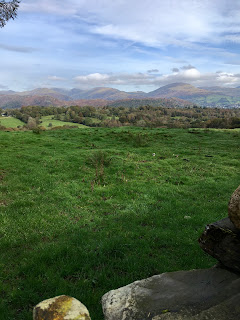 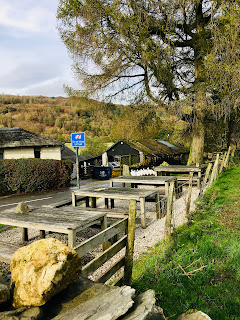 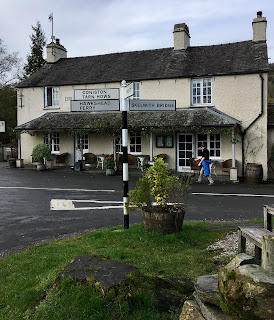 You see the figure in the above photo?  That was one half of a couple who arrived at the pub after me, but whilst I exercised deferential respect re the 11:30am opening time, this pair barged their way in at 11:25am, and were already seated with a coffee each (or stout in a coffee cup, we can hope) by the time I finally entered the Drunken Duck, Barngates (1584 / 2801) and ordered what turned out to be an excellent dry stout (£4.60), brewed by Barngates themselves.  The pub itself, something of a disappointment for the pub purist, though good if you were working on a 'Cumbria Pub Bingo Card' and were in desperate need of inspiration, as I happened to be.  From the dried hopbines hanging from the bar to the the preponderance of visiting dogs, this place had it all.  There was even unlikely pub folklore aimed at the gullible tourist (something about ducks getting drunk, the landlady plucking their feathers so she could prepare the ducks for lunch, then realising they were alive and being so overcome with guilt, she made little coats for them for ever and ever).  Well, a nice tale anyway but DHOTYA, as we say on Twitter.  A bit like the Black Bull in Coniston, a peaceful first quarter of an hour gave away to an influx of lunchers just before noon, my cue to leave, think I was in fairly cynical mood today.  Staff friendly, but you could see the post-weekend weariness in their eyes fighting a strong urge to tell all visitors to go forth and multiply! 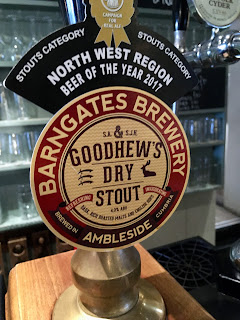 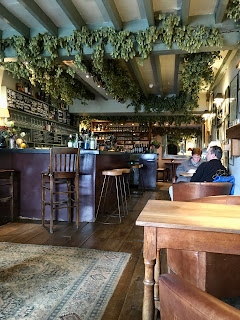 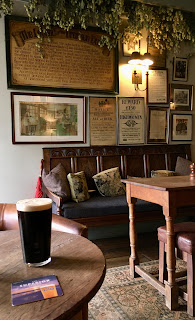 
But I chided myself for having nursed my stout, when I could have easily got in an Outgate Inn preemptive before the bus was due ...........


I got myself back as far as Ings, just the right side of Windermere (can't remember if I had to change buses or not).  Utter nightmare crossing the road down towards the next pub.  I saw a kindly looking old man waiting already, so said 'hi', made a joke about tricky crossing, and basically used him as a human shield.  He didn't seem to appreciate it.  But we made it across together and he went straight for his car boot ......

Before I could see which gun he was actually going for, I hot footed into the next pub ...... 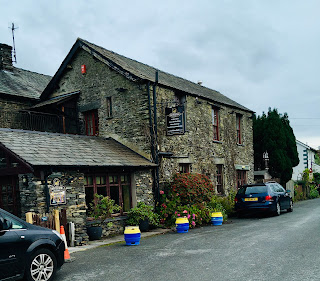 Such was the sullen, morose atmosphere in the Watermill, Ings (1585 / 2802), I suddenly had a new found appreciation for the Drunken Duck from where I'd just come!  One of the biggest disappointments of the holiday, I found this an incredible dull 'tourist by numbers' pub that felt tired and lacking a spark.  The lady who served me was especially glum, and later in the holiday I chatted to someone who said the landlord had died not long back, and he was the life and soul of the place, which may explain my experience here today.  A pub slump perhaps understandable.  All beers were dog themed, I went for the 'Windermere Blonde' cos it had a more Loch Nessie pump-clip as opposed to a 'pup-clip', a very average pale, a bit tired, and a few people said I should've gone for the Dog'th Vader which is very nice.  Nowhere to sit of much note, a group of gobby women who 'told it like it is' said things like "I'm not racist but ......" and a brother and sister got angry when they couldn't compromise on a food order.  I was behind a pillar and a bit 'away from the action' and all I could do was hone my Cumbrian Pub Bingo board.  Restless and bored, I was soon roaming the rooms looking for inspiration.  Despite the chilly air, outdoors provided something at least with a bridge, river and probably a waterwheel or actual mill or something.  A Dog'th Vader van arrived, nearly ran me over, the racist lady held a door for me as I'm pale skinned, and that kinda summed it up.

So these two pubs were prime examples of the 'Lakes' tourist pubs I'd be warned about, but luckily, weren't found in too high quantity on my holiday.

Things were about to improve with my next three pubs, so join me tomorrow where I'll try to be less of a misery guts (though blog history tells me, Si suffering = more page views!)