So just to recap. Coniston had been a fun three pub experience, particularly the Black Bull and the Sun, and I'd returned to the former for an 8.5% barley wine (which of course, being a martyr, I like to mention at regular paragraphly intervals).

A swig of my juice might help (it didn't) as we took the bus to Hawkshead and I was still just about in control of my limbs as I waited for the connecting bus to Near Sawrey.  I was stood with a family who were on holiday from China.  "Wow, China!" I screeched at the Dad.  "I know lots of visitors come from Japan but not so many from China".  Not sure how factually accurate that was, but I was obviously trying to make them feel special and unique.

When the bus arrived, it took on a slightly strange form .......

..... and in the cramped confines of this minibus with a perky driver who handed us all a leaflet and tried to give us a potted history (or should that be a 'Potter' history?) of Beatrix, I squealed "I'm just off to the pub in Near Sawrey for this thing I'm doing so can I stop there?" hoping I didn't sound too ungrateful, still self conscious enough to note my Barley Wine breath infecting Chinese kids in the squashed environs. 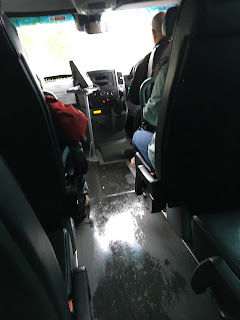 I hopped off in Near Sawrey, saying "see ya in an hour" to the driver which probably sounded more like a threat, before heckling a field full of black sheep with a rather sick joke about them become Riggwelter's which may have been too obscure for the assembled crowd ...... 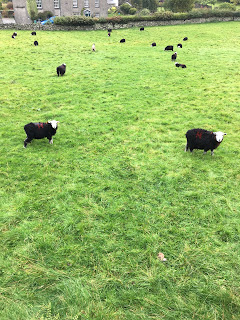 I left them to cogitate over what they'd just heard, or at least chew a bit more grass, and rounded the corner to see the pub staring back at me ........ 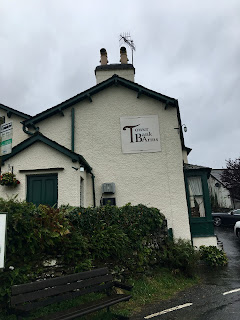 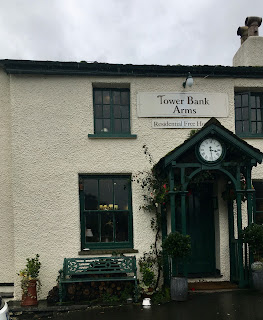 It looked promising, and I was still holding it together just well enough to be able to report that the Tower Bank Arms, Near Sawrey (1582 / 2799) struck a nice balance which the Consiton trio had slightly struggle at, which was to be welcoming to the one-time only visitor, whilst maintaining something of the rural Cumbrian farmhouse pub charm.  I managed to take my wonderful light Hawkshead ale (just the type of beer I needed at this point) to a table over to the right, by a fire for the third time out of four today, though it was fizzling a bit in the grate and a bit like me, needed the odd prod of encouragement to keep it alive.  A young bunch of walkers, very much like a trendy 1st century version of the Famous Five came in, and perhaps unsurprisingly, found a few classics on the shelf ..... the Flopsy Bunnies was read with animated enthusiasm, but all were wavering by Jeremy Fisher.  Whether it was the atmosphere or the Barley Wine I like to mention, I found myself drifting off and had to remember I had a bus to catch back to Hawkshead. 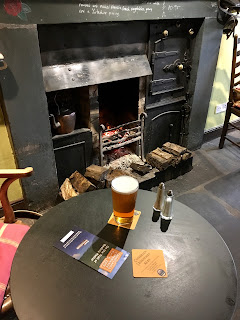 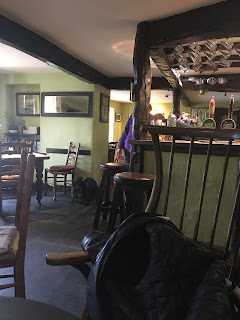 Nice and early for the bus stop, I got talking to kind local couple, and when the woman told me which bus stop I needed for my forthcoming trip to Barngates, I was somehow able to remember it as it was different from both of the two I'd been contemplating.

For now though, Mountain Goat back to Hawkshead,  and who should reappear but the Chinese family?  "Hi again" they said nervously, and they were right to be so, for I screeched "hiiiiii!" and gave them all attempted hugs!  And it was then I realised the Barley Wine had properly kicked in.

It had been watery sunshine at the stop, but once the driver woke me up in Hawkshead and said 'we're here mate' (the Chinese had done a runner!), I found it absolutely bucketing down again.  What's more, I'd somehow turned my Mobile Data off accidentally and just thought phone signal in Hawkshead was particularly bad.

Result, walking around getting drenched in a circle of this pretty yet probably very small village seeing a few pubs, none of which had Kings Arms written on them!  There was even a Queens or something, grrrr!   I drank a bit more of my juice and did it logically, one street at a time.  A few locals looked at me curiously from behind net curtains, but I pretended I was enjoying a rainy exploration.  Finally, the pub came into view and hadn't been too hard to find after all ....... 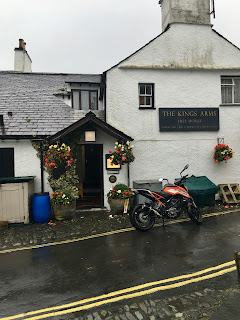 And I'm glad I have photographic evidence or I'm not sure I'd even be sure I'd been to Kings Arms, Hawkshead (1583 / 2800) and of course, totally unaware of the 2,800th gross GBG pub landmark.  I remember thinking it had quite a nice traditional feel, though not quite as rural feeling as Near Sawrey, rammed with tourists sheltering from the rain, and worse still, a gaggle of dogs smelling of wet dog.  Ugh!  "Even your pictures are blurry" said someone cruel/funny on Twitter - well, that ain't nothing new, as I nursed a pint of Hawkshead Bitter (it had to be done!) which was just as glorious as the pale one I'd had in Sawrey, and evidence if it were needed, what a cracking brewery this is as I was able to 'enjoy' their beers even at this stage of the day .... which in 'time' terms, was actually still quite early.

I still had a pain-staking wait back at the makeshift bus station, so walked around some more, dusk fell, and next thing I knew, a bus driver woke me up (again) to say we were at Ambleside and where was I going.  "Kendallllll" I breathed in a sort of drinkers death rattle, and he said I needed to hop on the bus just in front bound for Windermere which I did.

A final swig of juice. and I came around a bit, noticed the local landmark pub the New Union in the gloom, got myself to Tesco Express for late night snacks, and plenty of healthy restorative fruit and water, for I had to do it all again tomorrow, hopefully minus the 8.5% Barley Wine I like to mention.