The penultimate day of my Lake District holiday, and I'm not gonna lie, I ain't a young buck anymore and I was 'feeling it' so decided to roll over and have an extra hour in bed!  After all, it is not like there was an urgent need to get up, was there?

But hang about, what's all this?  My phone practically glowing red like I was Alfred Pennyworth, with notifications left, right and centre.  Tom Irvin texting excitedly, Pub Curmudgeon sharing links like a demon, mysterious people called Martin and Nicole trying to add me on Facebook, and South East Essex CAMRA threatening to call the police if I didn't wake up soon!   What WAS going on?

Well, I can tell you.  My Good Beer Guide had been found in Denby Dale!  I will write about this in more detail in tomorrow's month end review, but I was all a nervous, excited, flustered bag of nerves, barely able to force down the smallest breakfast of a spoonful of baked beans, one fried egg and a full pork sausage.  Even toast and the daily yoghurt had to be postponed.  I did manage to nick a small blueberry muffin for my bag though.

What's more, the Premier Inn breakfast had reverted to my preferred 'buffet' rather than table service for the first time this week.  I walked to the bus station with a spring in my step, everyone in Kendal seemed smilier than usual.  Yes, today was gonna be a good day!

I needed luck to be on my side, as I was Keswick bound today.  Ambitious bus journey, Keswick's makeshift bus station itself spookily like Windermere with a posh Booths Supermarket looming below the misty mountains ....... 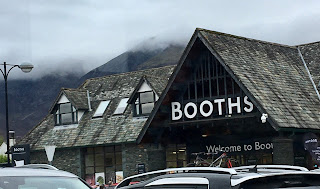 I popped in for a wee, a bottle of Australian water and an Orange Twirl, and decided to tackle the hardest pub first.  Loweswater.  Du-duh-dun!

No obvious way to get there on public transport, but meticulous BRAPA planning tells us to take the connecting 77 bus to Lanthwaite Green Farm, walk a bit up the B5289 and turn left onto a mysterious dotted path which links it to the road into Loweswater.

With hills I'd climbed as a twild (Kewick was our family Lakes destination of choice) such as Catbells and Great Gable looming overhead shrouding us in near darkness, I was nervous when I pressed the bell and the bus driver and fellow passengers acted like no one had ever used this bus stop before!

More nervous as to what the mysterious dotted path on Google Maps actually represented.  My worst fear, I had to climb a mountain, in these scabby trainers!  But luck was on my side today, and it turned out to be a delightful forest walk. 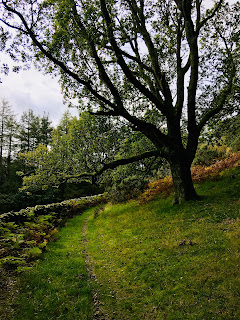 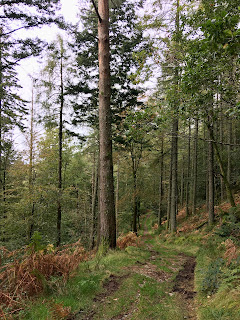 Slight moment of peril as forestry workers had felled a tree and blocked the path, but they kindly moved their tractor so I could get past.  Much shorter walk than expected too, did it in about 30-35 mins when I'd been expecting 5 miles or something.  A kind man helped me negotiate a sticky gate, and the pub was soon in sight.  Phew! 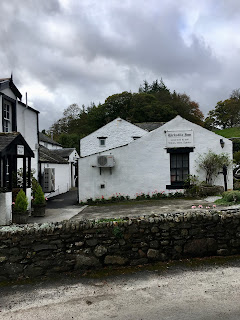 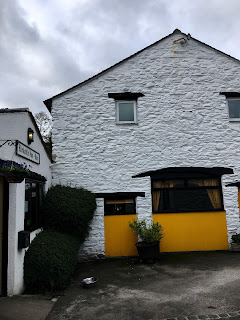 So I was pleased as punch as I walked into Kirkstile Inn, Loweswater (1589 / 2806) , my smile beaming around the room so bit of a shame most of the other customers were codgery old diners from cars, blissfully unappreciative of the efforts people like me go to get to pubs.  The landlady was 'stand out', called me 'sir' three times, even after realising I was just having a pint and no food.  I sat at a table for six, aware I might have to move for diners but it offered me a good view of all that was going on.  And besides, the lunch rush was dying down by now.  Despite the foodie feel, the low beams and crooked building made for a good atmosphere, then a man shocked everyone by ordering a 'kid's crumble' for pudding.  "It's for the wife" he exclaimed loudly, "she's a bit stuffed!" and I saw her glaring around a beam at him as everyone smirked.  Talking of stuffed, Martin the Owl was out today, so we toasted the return of the new GBG.  "I like yer owl!" said the landlady, just to prove what a quality staff member she was.  I told her he was called Martin and was enjoying this pub very much.  Her skepticism was there for all to see, and she went to clean a table.  Three Real Ale Twats arrived from nowhere, and decided to sample all the ales very slowly.  The theatrical way they threw their heads back so the beer hit the back of their throats was embarrassing to see, and I quickly put my replacement GBG back in my rucksack for fear of association and swallowed my CAMRA card.  "Oooh, the Cascade is really coming through on this one!" said the most appalling of the three.  Time to leave. 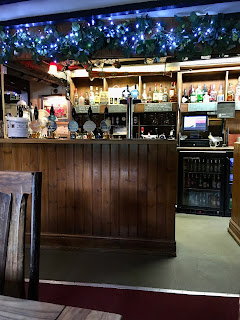 I made such good progress with the walk back to the unlikely bus stop, I was in danger of catching the earlier bus if it was delayed, and because the god's were smiling on my today, it was!  I was back on the B5289 when the bus approached.  I wasn't at the stop yet, but held out a hopeful arm anyway, and gawd bless him, he stopped! I wish I'd bought a lottery ticket today.

The bus went through this place just outside Keswick called Braithwaite where one of my other 'outer Keswick' ticks was.  Hurrah.  I like it when a plan comes together. 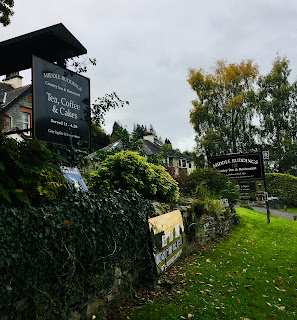 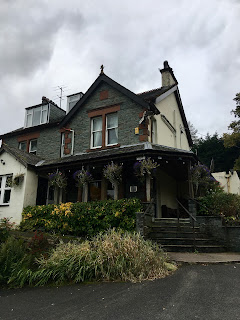 Just a bit off centre on the hill up to Thornthwaite, I felt hopelessly scruffy as I arrived at Middle Ruddings Country Inn, Braithwaite (1590 / 2807) , a peculiar GBG entry which was like a hotel bar and posh country club rolled into one.  I never felt quite at home or relaxed here, bad news as I worried I had near on two hours to kill!  But I needn't have worried too much about being scruffy, the only customer a young tanned chap called Chris (just back from a week in Marbella where he'd admitted he'd forgotten it might be sunny) in tight blue shorts sat at the bar.  He helped me get served as the barman had his head in a fridge shuffling bottles, so didn't hear me arrive.  I sat by a nice fire, amongst some very nice decor yet still felt strangely out of place, uncomfortable and bored.  At least I could eavesdrop on Chris's saga.  Seems he'd fallen out with a dude who owed him money.  "I've just replied with the rudest text message I've ever sent!"  he declared, and I thought 'uh oh, I'll have to edit the horrid fucking swearwords when I write my blog'.  I braced myself for the onslaught of filth, and he says "I've put 'And I refuse to even pay the 25p postal charge'.  That'll teach him!"  Errrm, was that it?  Candidate for low key bizarre moment of my Cumbrian hols.  Sums up an odd pub tick, and because luck was with me today, I'd found another bus route to Keswick, with one due quite soon so I was able to drink up and leave, post-haste.  Phew! 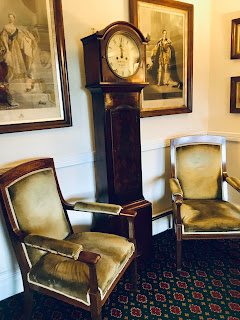 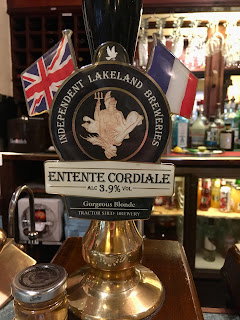 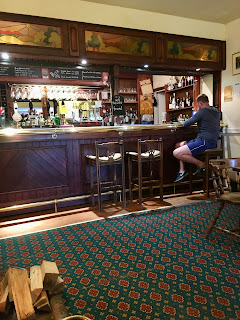 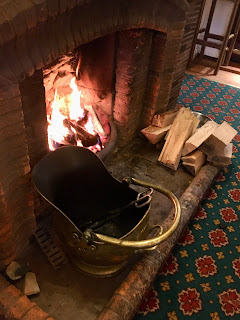 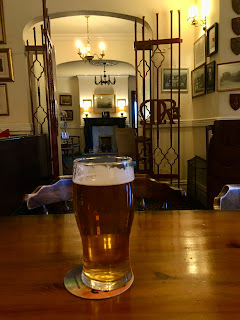 Back in Keswick, and time was ticking on much quicker than I'd have hoped (cursing myself for sleeping in that extra hour).  Still with three pubs to do before the relatively early last bus back to Kendal, it'd be a race against time.  I'll tell you about that Friday or Sunday, but tomorrow we'll have an interlude for the month end review.