Like repressed memories revived by regression therapy, Riggy's thoughts on Ulverston came back to the forefront of my mind as I arrived in the town for my final two pub ticks on Sunday morning.

"It used to be Ulverston-in-Furness but they dropped the last bit cos they think they are posher than us!" the staunch Barovian had told me on that fateful minibus journey on Friday night, before adding "they all love fighting, like bar fights .... but outdoors ..... they'll just randomly start on you in the street!"  This was my third visit to the town, and I must say I'd never felt this about Ulverston, but Riggy seemed like a guy who didn't let the truth get in the way of a good story.

Not that I'm about to slag off Barrow, granted it is a shithole, but a cracking shithole, the people are real salt of the earth, look you in the eye, say 'arite' to you in the street, ask you the time, offer you a mug of beans, my kind of place.  York residents could learn a thing or two off 'em.  Ulverston seems the posher relation, but again, people seem sound here too.


And here I was having all these thoughts, 10am, Sunday morning, in an absolute deluge of rain.  I'm a glass half full kind of guy, and rather than bemoan my luck at the return to Friday evening conditions, I just thanked my lucky stars that Saturday (my main day with lots of walking) was generally sunny, dry and mild.

Was it really likely the Sun Inn would be open?  10am advertised in the GBG.  But we all know how reliable times are in the 2019/20 season(!)  And the neon lights and thumping music I'd seen last night from the safety of Beerwolf, and the comments of the station lady made me remember there'd been one helluva event on in here last night! 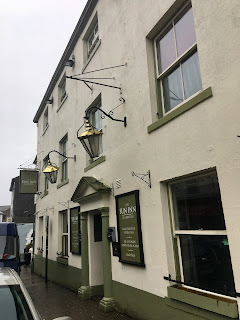 But god bless you Sun Inn, Ulverston (1560 / 2777), open it was to allow me to wring out my hat and observe all those lone old men, dotted around the vast establishment, downcast expressions at odds with the effervescent bubbles in their assorted lagers.  The atmosphere was so dead, I'd have had more joy reviewing the Sunday papers with Peter Sissons.  But our knight in shining armour was a very sprightly bearded bald barman, glimmer in his eye, injecting much needed life into the pub, enthusiastic for the local Stringers Ales (Martin the Owl reports 'decent and drinkable') and the sight of my Good Beer Guide.  "We are in next year too!" he confusingly tells me, running the risk of getting a telling off from his manager who was eyeing his 'stop and chat' conversation with me with much disdain.  Despite the vast empty spaces in the Sun Inn, so much is given up to dining that we end up with the farcical situation that six blokes including me, none of whom knew other, gathered around the same table!   I was second to arrive, and couldn't believe it as other blokes kept sitting down with us.  Only the comedic bloke with tracksuits bottoms and wellington boots desisted.  "I'll swap ya two paracetamols for a cigarette!" says a guy I took to be landlord to man #3 , alluding to the 'heavy' Saturday night that EVERYONE was talking about.  Only a faint smell of sick hung in the air, the clean up operation had been very effective under the circs.  I tried to ignore the piles of random logs, fake bookcase wallpaper, many fruit machines and giant plasmas to the left.  'Good days start with a coffee!' said a flouncy sign above the bar.  It wasn't in keeping with the general mood.  True, this was the weakest pub I did all weekend, but strength of good folk can't be denied.

Onwards and upwards, up the hill actually nodding at The Mill which I did with friends in Dec 2013 ,  I had one more left that hadn't been in those early BRAPA Good Beer Guides.  And here it was, a sort of ice-cool blue .......... 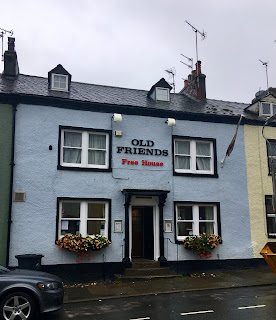 And you know when you walk into a pub and you instantly know it is going to be brilliant, well I got that sense here at Old Friends, Ulverston (1561 / 2778) as a kindly lady served me some homebrew (a lot of it around this part of Cumbria) and as I drape my sodden coat and hat over a nearby bench, she asks the unusual question "do you want to ask Alexa what music you'd like?"  The new pub 'toy'.  "Well, I like punk rock but not sure if you think that is appropriate for this time on a Sunday...." I reply, instantly hating myself for sounding like some fanny god botherer.  She thinks hard, then bends down behind the bar where Alexa is cowering from BRAPA, and asks "Alexa!  Play some Iggy Pop."  'Hmmm, Iggy'll have to do I s'pose', I reason silently.  But Alexa ignores the instruction.  Another lady appears, Alexa likes HER.  "Alexa, play some eighties hits!" she breezily chirps, and without missing a beat, Alexa blasts 'Addicted to Love' by Robert Fucking Palmer around the pub.  'HOW DID WE GET TO THIS POINT?'  I fume silently.   But no time to fume for long, for I look up from a swig of my pint to see a cat meowing up at me.  A PUB CAT!  IT HAS BEEN TOO LONG!  'Play it cool Si, play it cool, cats hate a tryer' I tell myself, and move my jacket, for it seems to want to sit on the bench next to me.  But then it runs off.  I 'casually' go to find it, in a different side room of this multi roomed homely gem, it runs back into the room I was in, and then disappears altogether!  Shame.  Max they call him.  "We have a tortoise too" says the barmaid randomly.  She's either outside or getting warm under a seat.  I 'casually' go in search of the tortoise, Thomasina they call her.  No sign.  And tortoises can't even run away from me.  'Your pets have all disappeared' I complain, perhaps they've read my blog.  Barmaid gets even better by telling me she used to be a beermat collector (she'd apologised for forgetting to put them out), so we chat about beermats for a bit, before I swig off my drink, thank her, and leave.  Wonderful pub this. 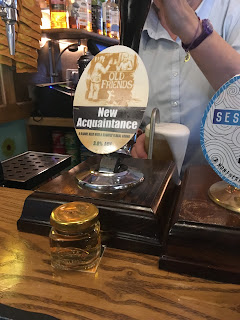 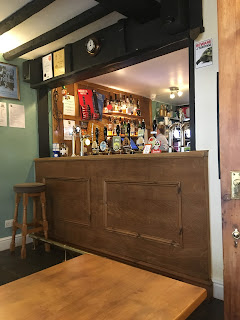 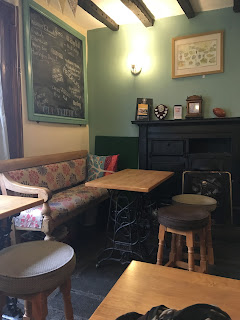 With the rain still bouncing down, I was conscious of more flooded train lines leading to more unreliable replacement bus services, so the sensible thing would've been to get the hell out of Cumbria and back in a Yorkwardly direction as quickly as possible.

But sense goes out of the window when there are pubs to be ticked, and one more would put me on 10 for the weekend, a nice round figure to end on.  What with Sunday bus services and a funeral the next day, I did err on the side of caution to some extent, deciding to leave Greenodd and High Newton for another day.

I still had to change trains surprisingly, at Grange over Sands where my Mum and Dad were coming on holiday, straight after the funeral.  I read about wading water birds but couldn't see any ...... 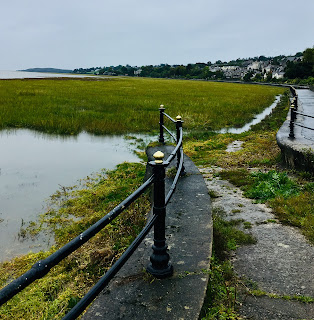 One change too me to Cark-in-Cartmel, or Cask-in-Caramel as I thought it was called when I first saw the station sign back in 2013.  The pub was a short walk ........ 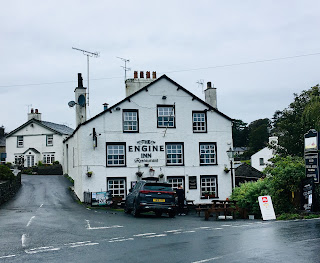 And I'm delighted to report that we go out on a high at another very strong pub, Engine Inn, Cark-in-Cartmel (1562 / 2779).  I'd arrived at the tail-end of the Sunday lunchtime rush, and the couple in charge apologised for my wait as they careered from room to room with spent gravy boats, snotty napkins and half drunk J20's.  I had a while before the connecting train so had time for two, a Swan Gold from Bowness Bay (another new local brewery tick!) and more significantly, one of those immaculate pints of Tim Taylor Landlord that remind you what a great drink it is.  And on a similar note, the landlord spies my Bass t-shirt on a trip to the loo and stops me to say what a wonderful ale it is, how he once got to put it on here as a guest, but said it was expensive to get in, so we talked about how it was quite a discerning, premium brand.  Aaaah, Bass twitter would be proud, they've taught me well!  You could tell they were a lovely couple, showing extreme patience with a twild who is encouraged to order a pudding he doesn't really need or want.  I was opposite a couple of late lunchers (not Mel & Sue), the bloke (who had an accent that became more southern the fuller he got) announced he was stuffed 'gorrr, lavva dack, I'm staffed!' , patted his belly, breathed out, then yoinked some roast beef of his wife's plate.  It was like Man vs Food as they were asked about dessert.  "I want a cheesecake ..... but give me five minutes!" he declares, a man seriously labouring under foody exertion.  Great pub, felt like it was made for a relaxing post-Sunday lunch atmosphere. 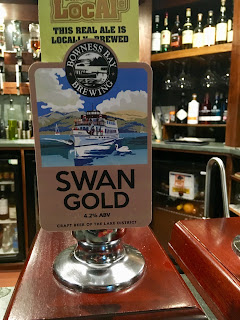 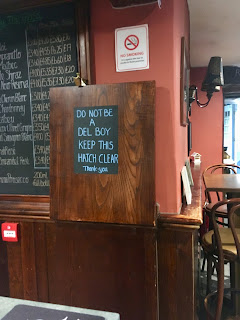 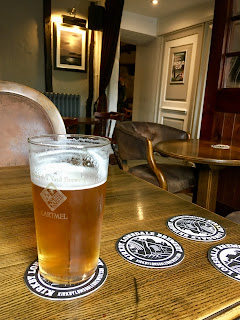 My good football friend Tom Irvin had said he'd be amazed if I didn't have any train cancellations coming back, and apart from some precariously slow points where we seemed to be negotiating waterlogged track, prepare to be amazed Tom because everything ran pretty much to time.

It had been a fantastic mini-break, just what was needed after a trying couple of weeks, and I really feel like the 'green' touchpaper has finally been lit on Cumbrian pub-ticking.  Can't wait to get back up there in a week or so.

However, as usual, there would be trouble ahead!  Join me tomorrow for news on that.