BRAPA ..... Goes Bravely into Staveley / Levens is Where the Heart is (Cumbrian Adv III, Pt 7)

That road opposite the Watermill in Ings had been such a nightmare to cross, I decided I could probably have walked have way to Staveley by the time I'd managed to negotiate it and hop aboard the next bus.

So power-walk it I did.  After all, for a Cumbrian holiday, my leg mileage was pretty poor, which says a lot for the good bus services around here.  I doubt North Cumbria is going to be quite so hospitable in this respect, but that is a worry for another day / week / month / year!

In fact, it soon became a game. 'How far can I get before the bus overtook me?' and the Staveley turning was actually just in sight when it finally sped past me.

With Barngates and Ings being disappointing, hopes were not high for the two pubs here, and the first I came to was just off the main drag in a sort of car park / retail park type complex ........ 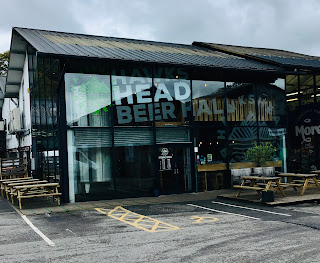 Beer Hall (1586 / 2803) was the name, and wonderful Hawkshead beers (always pleased when I see them on at York Tap) were the game.  It was a 'hall'.  It sold beer.  The Ronseal of pubs, did what it said on the tin.  The kind of chirpy young dude was straight on me once I got within a few hundred feet of the bar.  He asked the age old "what style o' beer do you go for?" question, so today, I told him dark beers, just so I could recount my Barley Wine experience - not that I like to talk about it. A combination of this and his carefully manicured beard, a back tattoo of a Jackson Pollock painting and encyclopedia of the history of Japanese rockabilly in his man bag meant it was no surprise when he edged me towards the keg taps where plenty of 8.5% beers were available for prices I shuddered to imagine.  I disappointed him wildly by opting for the cask porter.  I apologised for being boring!  And then hated myself.  Then I tried to smuggle a Quorn sausage I'd wrapped up from my hasty breakfast (or was it a full pork-on?  Wah'hey!) but the eyes of a large group of 'ladz' were often on me, not helped by a very sociable seating attempt seemingly inspired by Pret A Manger.  I concluded I could imagine coming here for a 'sesh with the boys' and it being great, but as part of a one pint pub ticking adventure, despite some nice warm fans blowing hot air, it wasn't the kind of place to wrap its arms around you and tell you everything will be okay!  Great porter though.

I walked down the road a few yards in search of the next pub and someone was taking a photo of it, the mad bitch.  Was this the first sign, followed by the interesting archway thing that this was going to be very good?  It should've been.  Let's go in shall we? 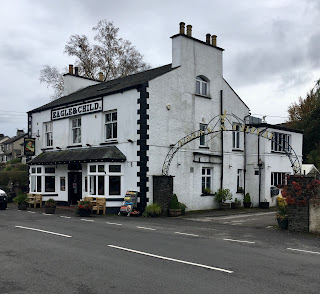 Yes, to walk in to the Eagle & Child, Staveley (1587 / 2804) with zero expectations, and be hit with a feast for the senses quite this wondrous, especially on a day where I'd not really been in a 'pub pub' if you know what I mean, was really quite special.  I'd go to 27 pub ticks and 6 preemptives this holiday, and this was perhaps the best of the lot.  I sat by a roaring fire just a few yards from the bar, and was amused to observe the young lady who'd come in just after me, the personification of my own reaction, I noticed.  She spent the first three minutes just open mouthed, wide eyed, staring around the room, the next two trying to articulate to her bored boyfriend (just tap tap tapping into his phone) just how much this place was moving her, and when that failed, the next couple of minutes randomly pointing her phone around the room trying to do the pub justice through photography, before giving up and just sitting back and savouring the moment (well, talking to neighbouring table's twog - see below) yes, she sure encapsulated my own mood.  The stillness of the atmosphere was broken occasionally by a rumble from above.  And a 'toilet exploration' told me a room was reserved for some event upstairs (Old Farts Society?) and occasionally a few coffin-ready geezers would bound downstairs belying their years, and sit in the snug behind me and make amusing comments to the barmaid which you'd not get away with in Islington.  Rare I say this ever in BRAPA, but it was actually a wrench to drag myself up and away to catch my bus - time disappears dangerously quickly in here! 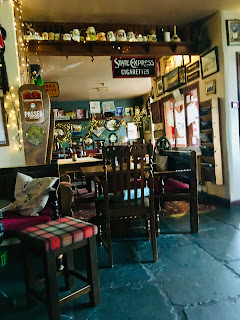 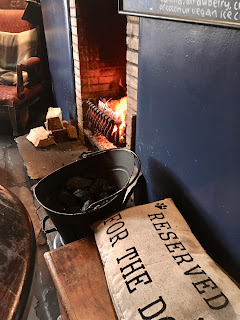 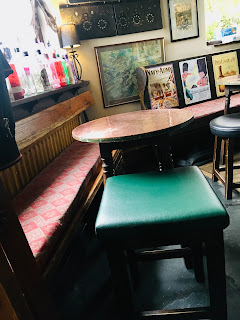 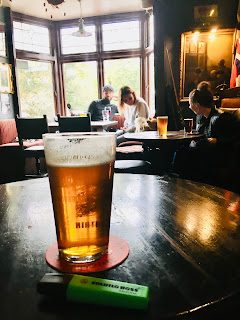 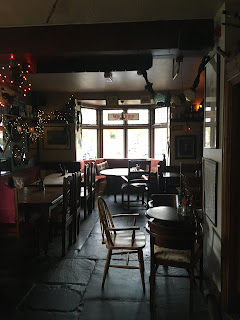 Yes, time was really racing on and a long bus journey to a place called Levens Bridge didn't help when I realised the pub was a further walk then I'd anticipated, actually down through the village of Levens, which involved a bit of muddy road walking in the dusk which didn't bode well for getting back!

Down a hill, turned a corner, and a kind of 'work in progress' scaffold pub scene hit me....... 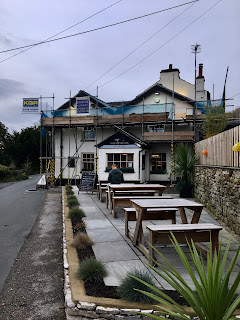 At least it was open, that was my first concern when I saw the above, but I was soon in Hare & Hounds Inn, Levens (1588 / 2805), and it'd be one of those pubs which conflicted me slightly.  On the one hand, it had an overly (and I'd say unnecessary) light, airy, modern, dining vibe, for such a location - and by now, we were south of Kendal, so I'd say a bit off the tourist trail.  But on the other hand, two friendly professional young dudes greeted me warmly, and the only real customers, two old boys, reading papers at the bar were both jolly chaps, even though their attempts to put the entire world to rights on every current affairs topic going somehow felt a bit strange in the context of a quiet Monday night in Levens, a bit like in the Countryman Inn in Piece where the locals tried to make sense of paedos and kid killers.  I only had a strict 27.5 mins to enjoy my Keswick Bitter which I did, and let's face it, any tick on page 98 of the Good Beer Guide is a job well done!

To be fair to the Hare & Hounds, I'd been a bit on edge for the whole session here, mindful of catching a late bus just around a bend in failing light.

And although the walk went well, luminous clothing and a torch should've probably been in the BRAPA bag o' tricks as it was a bit hair raising, when the bus arrived (10 mins behind schedule), I did everything right, but he still had to stop suddenly, and I had to run through a puddle up a grass verge to hop on,  which would be a feature of my October pub ticking as it'd turn out.

Back in Kendal, as I'd only done 5, time for a cheeky preemptive.  Many of the fashionable newbies were closed, being a Monday, but a strange place was happily lit up ........ 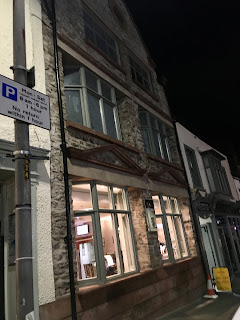 Yeah, I confess I could go back again now and I'd still have zero clue what Masons Yard 24, Kendal is trying to be, but it has been in the GBG before I'm sure.  Any pub with a number in is gonna be a bit shit, and that is, my friends, a BRAPA fact.  Friendly to a tee, barmaid 'Kes' (not a Kestrel) was super friendly, smiling at me throughout, to almost unnerving levels, as a strange Russian guy is goaded by a really friendly bald person who kept looking round at me for approval as he took the piss, the Russian chanted "Jesus Christ, Cheese and Rice!" (all in caps) more than once, the ale was good, and £2.40 a pint, enough to almost make me cry tears of joy after some recent brutal expenditure.  The place had a weird smell, and although the back/right part of the pub was brigther, more cocktail bar style, the main area at least, felt like a posh 'Spoons for the insane which had given up on an initial plan of being a high end bistro.  But I could be wrong, it was late! 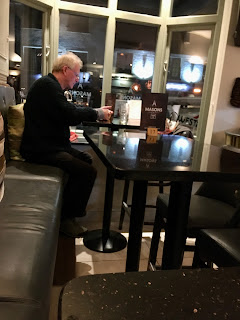 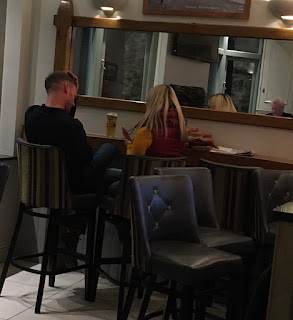 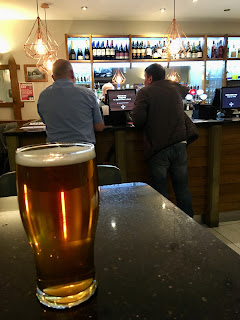 Time for my usual nightly routine of a nice bag of healthy food and juicy waters from Tesco Express where I admired a bit of late night Postman Pat.

As I turned my lights out and drifted off, my phone buzzed.  I noticed it was a text from the legendary Tom Irvin.  Too tired to see what it said, probably he's just passing Scunthorpe and saying everyone is a bastard, or Boaz Myhill has re-signed for the Tigers and is going to score a hat trick of own goals on his 'second debut'.  Can't be anything too important and BRAPA related?  Can it?