BRAPA ..... LAST ORDERS IN LONDON : PUB TICKING AGAINST THE CLOCK 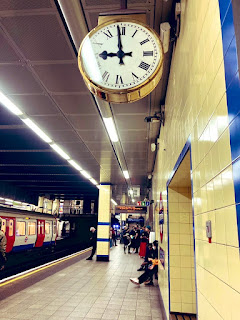 As the clock struck 9pm at Aldgate East Underground on Friday night, I could already allow myself a slight smile of satisfaction of a 'job well done', having not departed York until well after 6, but now checked in at my Premier Inn and back out for some pubs before last orders bells pealed across the city.

And the City was where I was headed, in search of those awkward Good Beer Guide ticks that don't open on a Saturday or Sunday, relying as they do on daytime weekday footfall from 'the suits'.

Relieved to see that they stay open until 11pm on a Friday, it almost felt like I'd found a loophole in the rules!

I didn't have a second to waste if I was to get to the three pubs I was aiming for, with the slight hope of a fourth, thanks to one kind pub that seemed to open until midnight on a Friday.  Too good to be true?  It's not like Whatpub, Google and the pub website would ALL be lying to me would it?  Would it?  Would it?

More on that later.  For now, a couple of stops took me to Moorgate, where I bounded off like an African gazelle in my Adidas Gazelles into the dark London night.  Barely a soul about, as I tried to follow myself (the little blue dot) on Google Maps, which always goes insane in Central London. 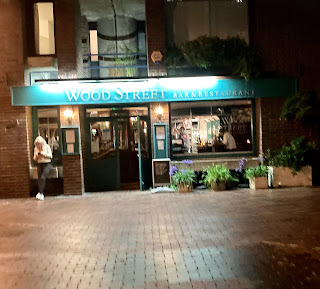 Wood Street, Barbican (1920 / 3349) was probably the least desirable (to me at least) venue of all tonight's ticks, being a fairly modern bar, but with some surprisingly satisfying booths with etched snob screens, a satisfyingly Stabilo-tastic bright green colour scheme, though possibly a bit too Aqua for my liking, and some inverted 'ferny' wallpaper to compliment the plants in tubs outside to make you feel 'closer to nature'.  A young tourist lad seemed to struggling to differentiate food and drink menus, so the bloke behind the bar looked relieved when I went "ey up, pint of that Bunny Purity Hop stuff pal, wi nowt taken owt".  The ale was fabulous quality, the best of the night, and the atmosphere was hopping too, mainly unseen from me, a huge group seemed to have 'reserved' the back area of the pub either officially or unofficially, for their own amusement.  One guy gave Colin an amused glance, but most were London twentysomethings so far too caught up in themselves to notice anything outside their immediate orbit.  I drank my ale in closer to 22.5 minutes, than 27.5, but fear not, a special clause I've just invented for Friday nights in Central London allows this.

Google Maps then was evil cos it tried to make me leave by the back of the pub, and cross this river, but there was no bridge so after avoiding a near drowning, I walked the long way around, seriously eating into my time.  I was NOT happy.
Eventually, with Google Maps still having a fit, I swung a risky left, everything seemed to click into place, and I was suddenly on the same street as the pub.  It was like a gift from the gods! 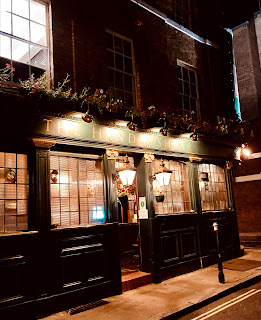 And that was true in every sense, the Hand & Shears, Smithfield (1921 / 3350) certainly one of those bona-fide London classics that you've heard of, but are astonished to find you have never visited despite having been quite a diligent Central London ticker since 2014.   Rare too that there was enough space within for me to appreciate the interior, nice curved bar all the way around, old wood panelling, tiny snug which I think was a former off-sales.  A few customer's around the back, but I was content in the otherwise empty front bar, more evidence there is method in this 'weekend closure' madness.  Guv'nor was a lively likeable chap, again I got that sense of relief from him that I was a paying customer walking in for ale, not wanting the loo or directions to the Shoreditch Beard Museum.  When I ask if he prefers cash or card, he says gold, silver and even bootlaces are good with him, I say I wish I'd brought my old bootlaces.  We then spend a couple of minutes moaning about card only pubs.  But time is ticking, and like he's read my mind, he says "I'll leave you to enjoy your pint" and walks off to do important pub work.  Tim Taylor Landlord was the beer, thoroughly enjoyable as it often is, but in the best of condition?  Probably just falling short.  Could this be something LON CAMRA find too and the reason why it isn't a GBG regular?  Or do they just rotate their entries at random because there are so many?  Who knows, I'm just a ticker, I'll go where I'm bloody well told.  Great pub though if you've not been, which judging by my Twitter same night, the whole world has. 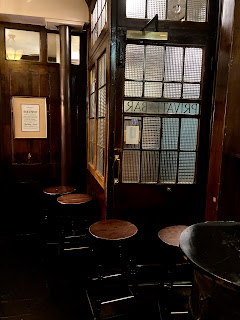 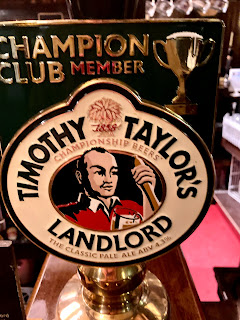 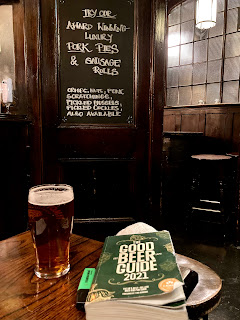 Problem with Smithfield was, I had left myself with an even longer walk if I was to get a third pub in before my midnight one.  I still felt like walking was the best idea though, staying in control, so I strode out to Cannon Street.
But just BRAPA luck to find a bunch of protesters and a giant police cordon! 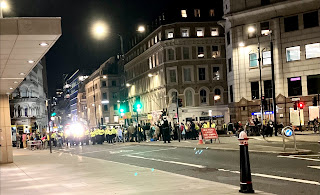 Twice I tried to cross it, and the filth diverted me down another street.  It all seemed pretty peaceful whatever it was about, but Mr Plod and the Oinkers were in good spirits, and the protesters sang 'Gold' by Spandau Ballet for reasons I couldn't fathom and dispersed without further kerfuffle.
It was NOT what I needed, and I just had to hope last orders hadn't sounded (it was 22:14 so I'd have been unlucky) ....... But as I walk through the open door, it seems as though our long haired lover from Lithuania is shooing me back out at the Bell, Cannon Street (1922 / 3351) and I'm all like "what what what?" and he's all like "nah nah, haha, ok ok come in, I thought you were someone else, did you see anyone out there?" and I have no idea what he's on about, so I get a pint of Harvey's Sussex Best, which despite what I said about it in St Albans last week, I end up enjoying more than my Timmy T's!  A strange night all round.  But before I've even perched at a side wall (not a very furniture filled pub)  , this overly friendly guy comes in all like "heyyy, how are you maan?  Havin' a gud nite?  You like this pub, huh?  Visiting London?  Local?" and he's talking to me!  My first thought is male prostitute, second is he's one of those 'Street Angels' that look after unfortunate waifs & strays on evenings in big cities.  So as you can imagine, I'm not as friendly as I would normally be, I face the wall and sup my Harvey's!  I think he must work here, cos he then takes our host upstairs, and they leave me alone in the bar for 20 minutes!  Not sure what's going on up there, presumably they are on important pub business as there's a lot of knocking and banging.  Moving barrels perhaps?  I get to admire the pub and Col gets to spread out a bit.  Our LHLFL returns alone, a new spring in his step, and we have a nice long chat about pub working and how he wishes some of his colleagues were a bit quicker at serving folk!  I let him do the highlighting, must give that Stabilo a sanitise, and that was that.  Another true London gem. 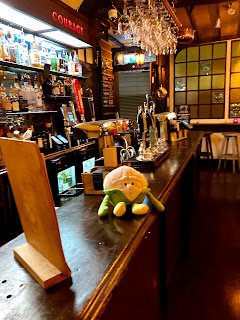 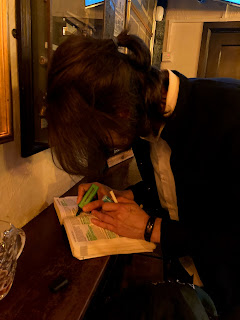 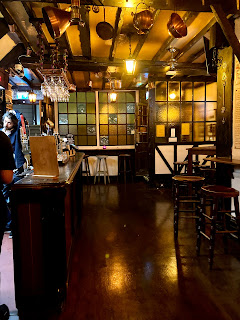 I half contemplate the Olde Bank of England at Temple as it is close, but with the clock ticking towards 11, they may well have rung last orders so LHLFL (who's now properly invested in BRAPA) thinks I should stick to the midnight closure plan.  It's now 10:45.
That takes me on the tube to Embankment, where I can change for the Bakerloo one stop to get me to Charing Cross where my pub is.  But no need, as my phone has enough signal to show me the pub is actually really close to Embankment anyway.
10:59 as I step up to take this photo, chilled out obviously because every source in the world says midnight closure for this pub ......
Out in the street, it had been a manic Friday night scene, so I'm not surprised to see it extend into the Princess of Wales, Charing Cross (1923 / 3352), quite a change of pace after the Hand & Shears and the Bell.  Charming Charing pub though, I'm always impressed by the pubs around here unless you count the Lemon Tree which I found very limp.  But I'm noticing the staff have a very wired look in their eyes, and one shouts "you got one minute mate!" I can't believe it!  So much for midnight closure!  But I must congratulate them, even though they seem hellbent on observing 11pm as 11pm, they are shouting along the bar for everyone to order now or forever hold their peace.  I'm the last person to be served, the last orders bell is chimed just as I put my payment card on the reader!   I find a recently vacated table by the door, and I says to Colin "well that was a close shave" (very Wallace & Grommit) and this barman is like "ah a cauliflower,  brilliant!" and a few drunk punters look at him and go 'awww'.  A very nice pub, lively, with that classic Central London 'loos are pretty much a vertical drop down steep stairs', though I guess it lacked something of the olde worlde charm of the last two.  My Ghost Ship is drinking well, and on returning from said loo, I'm amazed to see how quickly the pub is emptying out, save for three lasses beyond me taking selfies, and going to the loo one at a time, saying bye to each other, but not actually leaving.  I start drinking quickly, but even so I'm the 3rd last person to leave, pub must've shut about 11:20pm so I guess that's something of a compromise? 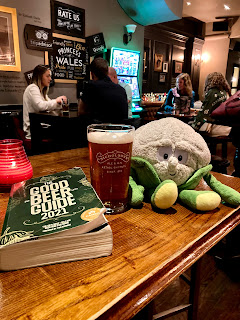 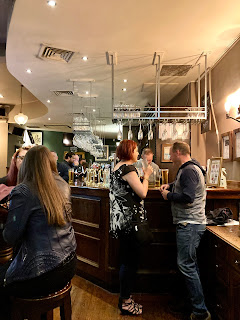 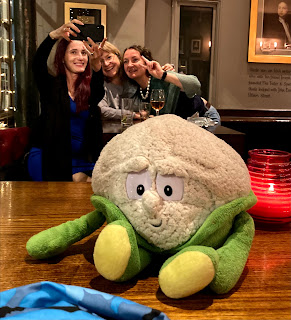 Phew!  Well that was quite the exhausting action packed two hours.  Back to Aldgate East, for food, water and a good sleep because the main reason I was down here, Essex, was just around the corner.
See you tomorrow for that!  (I've written my month end blog but will get these out of the way first)  Si