BRAPA in ......FOLLOW ME UP TO PONTE-CARLO : FINISHING WEST YORKSHIRE

My first 19th August tick in four years (when a posh homeless man with a KFC bucket asked Dad for change in an alleyway outside Spitalfields King's Stores) took me to Pontefract, home of the 'liquorice cake' and its 'down-to-earth nightlife' (thanks Wikipedia, but I knew that already).

It was to be my final West Yorkshire tick of the 2021 Good Beer Guide meaning I've 'fully greened' the county for the past six editions.  Such 'wins' are few and far between in these early years of BRAPA, so I'm celebrating success where I can!

After the inevitable change at durty L**ds (where at least five commuters went in on me, studs showing, elbows flailing, not even a booking!).  I was on the Northern train to Ponte which has about 13 stations, all named after Tolkein characters just for the laugh.  I wanted Bilbo Bagshelf, but Morgoth Monkhill had to do, an inconvenient 16 minute walk to the pub.

I also had the added excitement of meeting BRAPA debutant Leon Foster for the first time, who if he lived in obscure North Essex GBG hotspots, might be called the Finchingfield Leon (thanks!)

It wasn't the most heaving evening in town, even Argos looked sad ...... 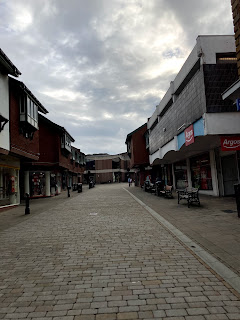 And after a bloke tried to run me over, the pub came into view, looking slightly less edgy than its next door neighbour The Malt Shov 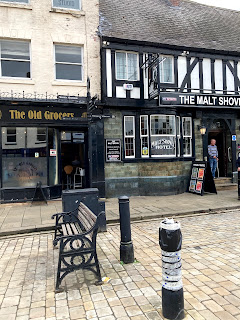 Old Grocers, Pontefract (1913 / 3342) worked as a micropub because it is in a 'down-to-earth' (thanks again Wiki) northern town where strangers look each other in the eye and say hello.  I ran the gauntlet, through the Ponte bodies, to the bar, lots of smiles and 'ayes' and nods.  Distracted by looking for Leon, I was less responsive than I normally would be.  I did however identify the main pub character, a guy with rainbow sleeves in an NHS top which looked suspiciously Chelsea.  He did a low down dance, not quite twerking thankfully, and laughed a lot.  The barman and his maroon bottoms seemed a lovely chap too, serving me an impeccable pint of a really bitter pale I couldn't pronounce.  With no sign of Leon, I notice a lady looking all sly.  "I know that look" I thought, and sure enough, she surreptitiously pops a sandwich into her mouth in such a stealthy way, even her husband, opposite but looking at his phone, doesn't notice.  I smile.  Pub food smugglers are we.  Leon arrives in a flourish, 17:50, lovely chap with links to Tranmere, a bit of a GBG ticker himself, so we are straight into the chat - Blanchland disasters, Tyne & Wear high spots, battle for Brinsworth, and all the other hot topics tickers love.  I get an extra half of Brew York's highly regarded Tonkoko (but it was wayyyyy too sweet for me!) to celebrate finishing West Yorks, pushing the boat out and all that. 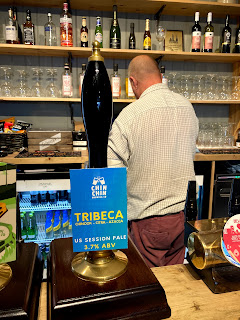 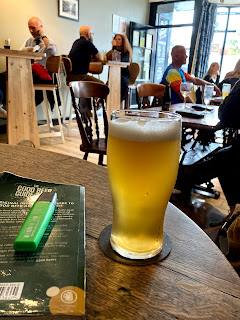 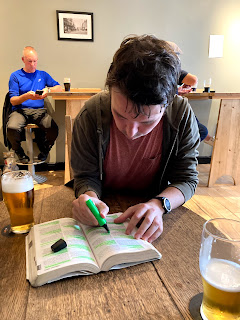 I said farewell to Leon, who did what all good tickers do and secreted himself into a dark alleyway not far from the pub, disappearing, and I headed off to Thranduil Tanshelf, another Pontefract Station.

There was just a little 0.1% of doubt surrounding my completion of West Yorkshire, where the 'Dubious Ticks Committee' (Eddie Fogden) had convened in Wakefield, to tell me that whilst it is true that the Polka Hop used to be the Bull & Fairhouse (which I visited in a very drunken state on 28th Jan 2014) , it is 'practically' a new pub with bar area, walls, seating areas all different.

So I thought, well Wakey is en route from Pontefract to L**ds so would be rude not to just to eliminate any doubt. 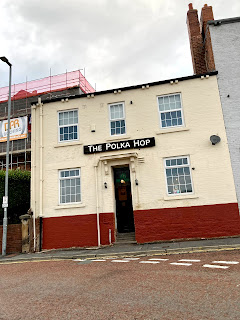 And I'm pleasantly surprised, nay delighted, to find that Polka Hop smells like an 18th century country boozer, and feels like one too.  Even more old style than I'd remembered Bull & Fairhouse, though that might be my drunkenness plus the passage of time, I'd expected the Polka Hop to be lime green, orange, metallic and playing electro Euro dance tunes!  Nothing of the sort.  Eddie is sat there, near the bar, and he's brought a dubious pub ticking adjudicator along, Polka Poole Pete (or Triple P for short).  Seems a nice lad too, and soon we are animatedly chatting on pressing issues like 'why is Bournemouth so shit?' and 'men of Castleford who hate Sri Lanka'.  All the while, I feel like I recognise the barmaid, figuring she must've worked in York pubs, I have to return my ale cos it tastes well ropey.  There's about 4 or 5 on, probably 1 or 2 too many, we are about the only customers.  Main bloke takes one look at it and goes ugh, and lady I think I know gives me 70p back too, bonus!  Replacement ale very nice.   Just as I'm about to dash to Westgate for my train, Eddie notices the heaven's have opened so with no hat, it is funky snood facemask bandana on head time.  Barmaid says she recognises me,  oh of course, friend of my sister's friend, went to same New Year's Party above a Pizza Shop in York!  Small World.  Which is the brewery on my beermat too funnily enough.  No time to chat, think she's called Jane or Marie or Kelly.

I just about manage to get the train, phew!  Now I can relax, and look forward to a Daddy BRAPA day on Saturday in the town where CAMRA all begun, St Albans. 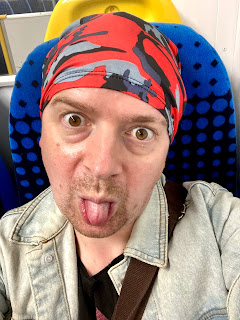