One of the friendliest taxi drivers in recent BRAPA history drops me in the bustling tourist infested hamlet of Rowhedge, with pretty views across the water to Wivenhoe.  Oh look, the foot ferry is running again having failed me when I needed it two months ago.  Typical!

The waterside edge is bedecked in pub tables, all full of couples in Ray-bans.  Kids with no shoes run around, ice cream dripping down their chins, excitable dogs yap and jump up, demanding a bit more exercise, a solitary teenager moodily lays on a wall looking all misunderstood and rebellious.

It is time's like this when I am most glad of pubs.  Indoor pubs.  Havens in a world gone mad. 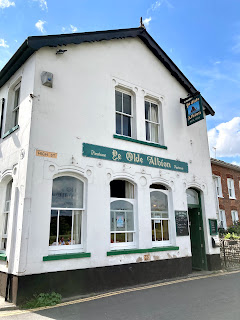 Olde Albion, Rowhedge (1910 / 3339) is certainly the friendliest pub of the day, and a low key contender for the best.  I walk in to a bare boarded and incredibly YELLOW backdrop.  Bar is at the far end and the jolly landlord offers me a 'try before you buy' on the 3.6% local pale ale I'm definitely going to be having anyway.  'Try before buy' is the only reason in my mind why I'd bring back the restrictions, a hugely irritating aspect of the real ale pub.  You are not entering into a long term arrangement like buying a house or car, it is one pint of beer, if it ain't to your taste, you'll just know not to order it again.  It all comes out the same colour in the end anyway.  Beer.  I'll never understand it.  Well, the landlord has just come back from holiday in York "nice but too busy".  His wife is less taken with my presence, and throughout has an expression more sour than Graeme Sourness drinking a bottle of Duchess de Bourgogne.  LOOK MOM, I CAN DO BEER HUMOUR!  The locals are astonished I'm off back home the same evening, and even more astonished I've been to Tollesbury and Boreham already.  Quality crowd in here.  I soon settle down, Jeff Stelling rattling off the latest scores, the locals taking great joy in telling me we are 0-1 down to QPR.  Feels like 2019 again.  'We'll come back in the second half' I lie.  Time to find a bus.  Great pub. 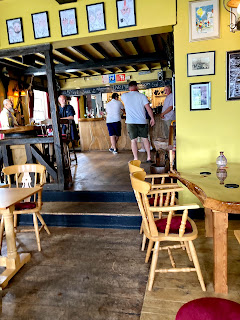 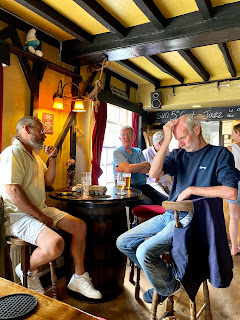 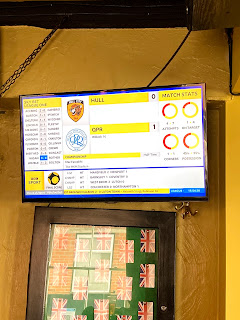 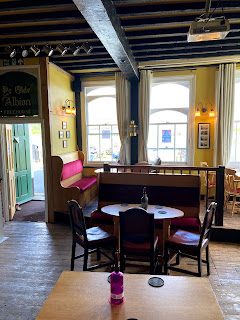 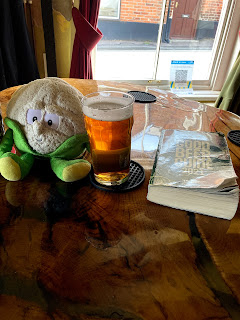 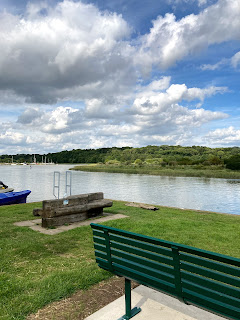 There's a good gaggle of tourists already waiting for the surprisingly regular bus service back into Colchester, where my final two ticks of the day can be found.  And thanks to 'local knowledge' in the Olde Albion, they tell me this bus whizzes straight past the front door of one of them.

I press the little bell with the confidence of a Layerman, or whatever Colchester folk are called.

The pub looks familiar.  Of course it is, it was here I was denied on that famous night where I was decked out in accidental blue and yellow, and Sweden were playing Ukraine. 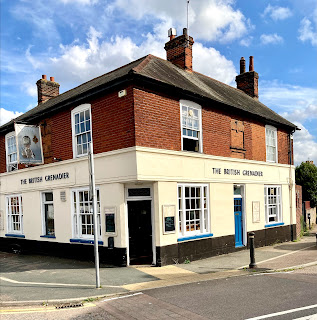 I'd heard so many favourable reviews and had seen it in so many previous editions of the Good Book, that I have to say how sad I was to find the British Grenadier, Colchester (1911 / 3340) such a crashing disappointment.  Even more maddening, it had all the hallmarks of Colchester classic in the mould of the New Inn or the Victoria, hell it even had a gorgeous black cat called Bruce behind the bar surveying all, and it still left me feeling it was keeping its GBG place on sentimentality reasons rather than current 2021 form.  It felt dirty, I've seen fewer flies around a carcass.  The beer was dreadful, and this was after I'd chirpily asked what everyone was drinking.  Barmaid seems nice, tells me last three ales pulled through are something or other, so I order that.  And she didn't lie cos I saw two of them being pulled.  Tired, more tired than a Tawny Owl who's been asked to work a 9-5 in a call centre.  Twit fucking twoo.  I don't really do NBSS but definitely a C- must try harder if I did!  Not take-back-able, but not far off.  And the locals, gosh a more sorry insular bunch of deadheads you couldn't have the misfortune of sharing a pub with.  So unsmiling.  So unwelcoming.  So glarey.  Ugh!   What a shame.  Hopefully an off day, as us traditional pub lovers need pubs like this to be performing.


I then trod exactly the same path I did on that Sweden v Ukraine evening (possibly the day England had beaten Germany), this time without the New Inn diversion, and straight to a now open Ale House (1912 / 3341) ...... 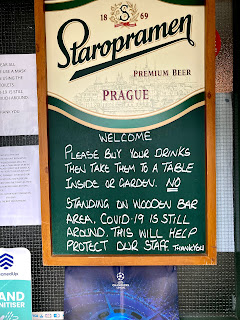 Pleasantly surprised by the Ale House, I really must stop thinking that all pubs with similarly boring names are going to be small, square, metallic one roomed micros, because I've been caught out like this many a time.  I believe a forthcoming Sheffield trip is similarly going to surprise me.  A nice old deep green carpet is my main memory here (5th pub of the day syndrome), quite a long thin building, which perhaps explains the tighter restrictions than in any other pub I'd been to today.  Lots of shields and screens around the bar, but I have a nice little chat with the barmaid as I order a Porter, but no idea what or why.  The old boys at the far end up by the plasma seem lively, keeping the staff on their toes.  Someone tries to insist they owe Gary money, because they gave him a bad football tip, but Gary is waving it away as just one of those things.  My last 'Not North' Essex pub in the 2021 GBG, and as I embark on the long walk to the main train station, I feel it was reasonably good pub to end on. 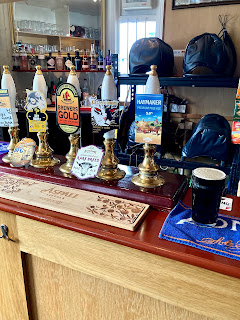 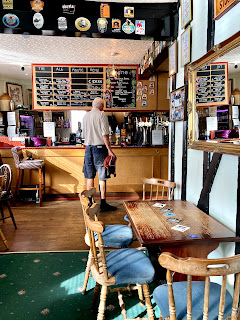 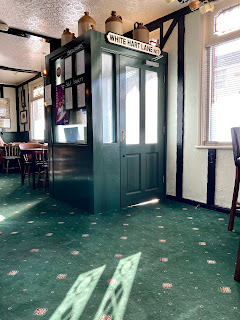 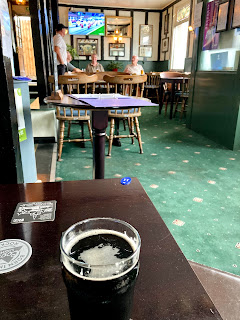 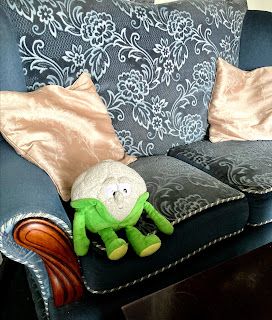 Back in Liverpool Street, I'm suddenly aware time just seems to have been sucked away from me, into this giant black vortex 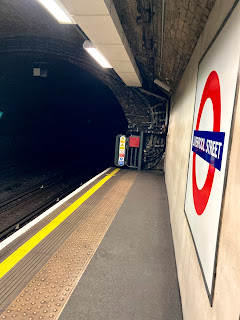 Sadly no time for a sixth BRAPA tick I had been half thinking of.  BUT there is always time for the Parcel Yard ..... 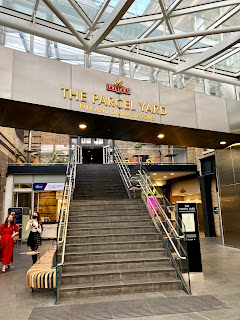 But I'm unable to recapture the magic of 31st July post-Hertford.  There is no ESB.   There is no Pride !  I must look very forlorn cos the barman assures me they will be back soon (as Martin Taylor found) but they are not quite ready, and they need to serve the beer at the very best quality he tells me!  I'd lick ESB out a muddy puddle personally, but ok, I nod sagely, as long as this is a one off.  Seriously though, Parcel Yard has never kept its beer better than it currently does.  Really on form.  This Summer Ale is great when I get into it, and although a few weird groups of Londoners are stinking the place out, I soon settle into my stride and my Parcel Yard mojo returns! 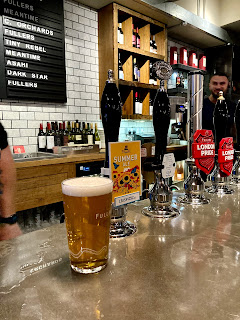 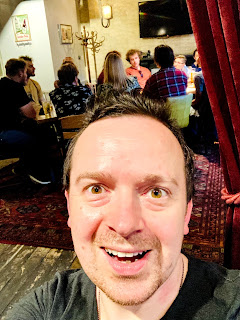 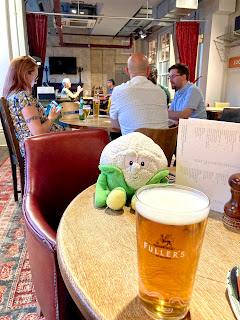 But I wasn't smiling for long.  The train journey back was amongst the most hellish of my life.  Someone jumped on the line somewhere near Stevenage.  Due in York 22:56, I didn't get in til 03:15am!  The legendary Tom Irvin knew what was going on with my train better than any of the guards who walked past me, so I could keep the carriage updated.
The carriage consisted mainly of very drunk Mackems on their way back from Milton Keynes.  I defended them at first against a moaning old man (second fave team n all that), but by midnight, ugh, me and this Peterborough lady were at our wits end.  Worse was this Colchester scout, a Fulham fan, ginger guy who came along just to stir trouble and pretended he 'respected' Sunderland but there was always a BUT!  A bloke called Louis Theroux nearly got beaten up by him for supposedly making a racist comment about Djibril Cisse, but in truth, it was a load of nothing, and when we got to Peterborough, I pretended I was getting off too, and moved to a quieter carriage!
And it wasn't like I could sleep in, I was serving drinks (some not even beer!) for SIXTEEN people at a massive family party!  Ooof, Dad's drinks list was professional and made my life easier ....

I was proper monged by 9:30pm and slept for ages, but I suppose looking back, in a weird kinda way, a successful day's ticking.
Si