BRAPA in ..... GIVE THE DEVIL HIS DEWSBURY

"It is back onnnnnn babyyyy!"  That is what I'd have said if someone had phoned me on the afternoon of Thursday 15th July and asked "Si, what exactly is the plan regarding the completion of West Yorkshire pubs in the 2021 Good Beer Guide?"  A question which of course, was never likely.

Yes, a successful Saturday outing to 'Halifax & Co.' had reignited the quest within.  Something BRAPA prides itself on is the yearly completion of West Yorkshire.  Every year since 2015.  Harder now as I work from home in York rather than L**ds, but still achievable.

For this trip, a train straight through to 'Uddersfield (thus preventing me from breathing in L**ds air), a hop, skip and a jump to the bus station, playing its serene classical choones in a vain attempt to stop the nob'eads from foighting.  20 minutes later, I'm in the quaint town of Elland.  Horrid name, nice place.  My first visit since March 2015. 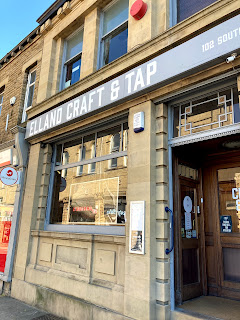 Elland Craft & Tap, Elland (1874 / 3303) may not inspire as a name, but don't let that deceive you, a superbly done out micropub with a nod to the traditional.  This is West Yorkshire after all, a rewarding county to pub tick in.  Difficult entrance.  "Please ring the bell".  Uh oh, I've been in this situation a few times during 'the lockdown years'.  Do what it says, and you risk a gurning local shouting "COME IN THEN YA LAZY BUGGER!"  Ignore it, and a telling off from the staff "DID YOU NOT READ THE SIGN?"  I go with the former this time.  It rings out a jolly little ditty, two part Westminster Abbey, one part Van Halen.  A bloke opposite who has a 'pub ticker' air about him glances up and smiles.  Three ruddy locals smirk and one shouts 'ow do'.  Friendly place.  A barmaid with a pink TLC t-shirt (retro!) brings me a beer menu.  Very Colwyn Bay.  "Dressed for the parachute regiment mate, same colours ho ho?!" shouts the ruddy ow-doer.  I confess that it wasn't something I'd thought of when I got dressed this morning.   One of his mates admits he's got Germanic ancestry, which causes a minor kerfuffle.  My North Riding ale is amazing (aren't they always?) and me n Col spread ourselves out nicely over the little swathe of bench seating, always a rare treat in a micro where getting haemorrhoids off a splintered bench placed between two old beer kegs is de rigueur.  Three 'ladz' leave without paying, but remember just in time, which amusing our parachute chum.  Nice stuff from Elland.

Back in the bus station, my other pub isn't too far a walk to the south side of town, but with frequent buses are available, a short ride made sense.

Bit of a problem as we queued at Stand U though, a man tells us there'll be a slight delay as there's to be a change of bus driver.  Most people take the news with good grace, but a tall lanky lad with an Oxlade-Chamberlain shirt on proper stretches out, whines to his Mum, and puts on theatrics, even though he's an adult.

When the bus driver appears, I invite Mummy Oxlade-Chamberlain and Stroppy Pants to join the queue in front of me.  Whilst she gratefully accepts, he sulks that he's gonna stay here for now!  "Ugh, I don't need this today!" she tells me.  "We've already been done by the police, now he's playing up!"  'Errrm ok'  I think, taking a step backwards and nearly stepping on a teenage girl with too much facial fuzz.
This next pub then.  Well, back in mid-October 2020 in those heady days of 'the grand cross ticking exercise', this one fooled me.  Look what I did! 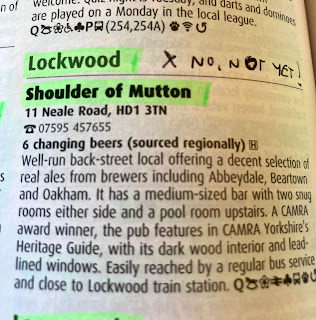 Yes, I just couldn't accept I hadn't already been.  Heritage, Grade II, bearing in mind I've done West Yorks in full for five consecutive editions.   Alas, the BRAPA database said no, so it was a no.   It really must not have been in a Good Beer Guide for a long time.
Down an unlikely side cobbled street around the bend.  An unlikely location perhaps but at least I know now I definitely haven't done it, it'd have rung too many bells. 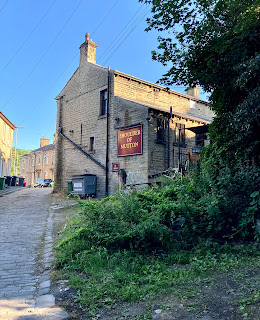 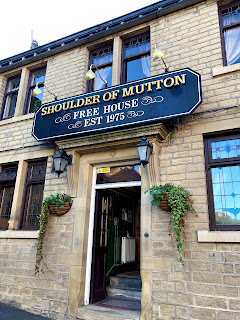 And what a fabulous West Yorks style multi-roomer the Shoulder of Mutton, Lockwood (1875 / 3304) is, with its central corridor and bar with rooms of different character off in each direction, not entirely dissimilar to the recent Albion Ale House in Conwy, but closer to the Red Lion, Old Colwyn in that the total lack of indoor customers and 'okay if fairly disinterested' welcome from the staff took some of the shine off the atmosphere.  Choices, choices, part of me wants to sit in the green benched dartboard room, but I opt for the more plush red room with Bass mirror.  World was my oyster, but I'd rather it'd been packed and I had to squash in between two friendly red nosed old fools.  Well, providing they didn't bite.  Talking of no bite, my Fresco ale, could partly explain its omission from recent GBG's.  It sounded full of fruity flavours, but it was quite bland.  Then a lady came in from outside, bemoaning her Oakham lacked bite, and she wanted something more.  The honourable Chris Dyson did tell me Huddersfield's strict limited numbers CAMRA allocation could be a factor in recent GBG omissions, but also, I think of pubs like Grove, King's Head, Rat n Ratchet, Sportsman etc. and have always had great beer in those pubs.  Overall, a very lovely building, but could've been so much more of a pub! 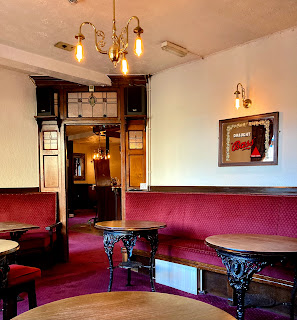 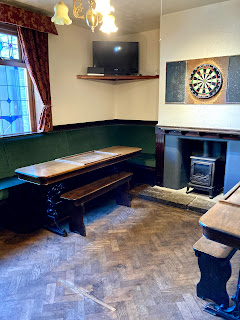 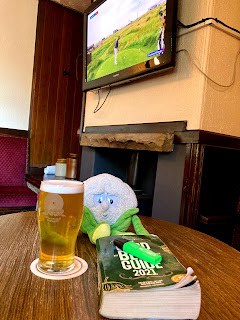 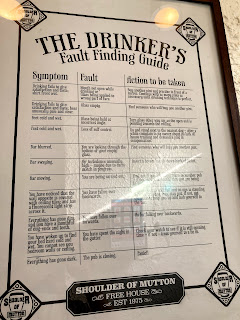 I wasn't necessarily going for a third pub tonight, but back in Huddersfield, I realised the trains in the direction of York are so well timed, plus the next stops at Dewsbury. I have to go for it don't I?
Dewsbury always terrifies me a bit as a town.  Too many work colleagues telling me tales of the unexpected.  West Riding Refreshment Rooms and then a train somewhere else is the way I usually deal with Dewsbury.  Tonight, I had to walk through it.  Gulp!
Always been intrigued by this pre-emptive, which me and Martin Taylor mused over on 'vaccine' day .... 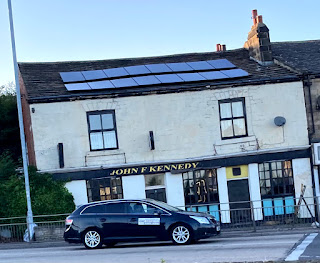 Crossing the road, and nearly going in some blokes garage (he saw but didn't seem to mind), I'm then confronted my a pavementless, perilous piece of road under a bridge and a giant grass verge.  Wow, not very pedestrian friendly to say I'm about three minutes from a fairly large railway station.
I persevere, and soon, my pub comes into view ...... 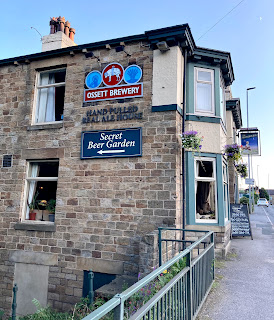 Reminding me slightly of my favourite York pub, The Fox, Shepherd's Boy, Dewsbury (1876 / 3305) has all the Ossetian goodness, if lacking some of the charm, but a very warm welcome regardless.  And once more, that feeling, 'how has this pub not been in a fairly recent GBG?'   A chirpy barmaid is all of a fluster, making her debut as Pub Quizmaster.  No I don't want to take part thanks.  Yes, I do want to listen in and laugh along / judge / take photos /make notes from afar.  I get a pint of the Ossett premium pale, Excelsius, formerly Excelsior - I was told the reason for the name change by a guy called Smooth but it was too boring to remember.  Only six people (plus a dog) are taking part.  Has she thought up the questions herself?  "Question 1 : What does the sign say outside our pub?" (cue bemused looks and much whining). "Question 2 : How many umbrellas in our beer garden?"  And just when you thought a theme was developing, question 3 was very leftfield. "How much does a Chewbacca costume cost online?"  Normal service was then resumed with Q4's "What brand of brown sauce do we use?"  But all in all, all I could do was silently chuckle from afar.  Arrange these three letter words to make a beer.  RAM  ORE  RIB   TIT.  Amazing stuff.  Classic WY pub experience. 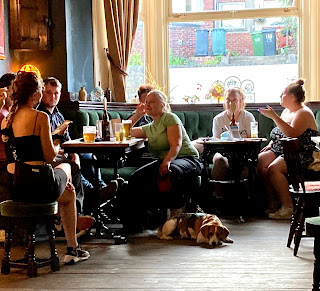 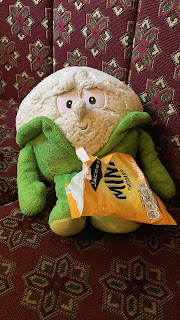 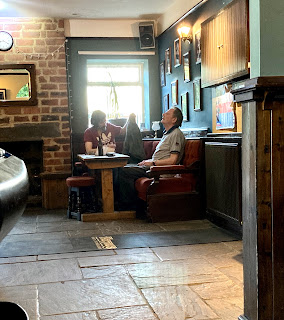 Back at the station, twenty two minutes until the train home.  Well it'd be rude not to wouldn't it? 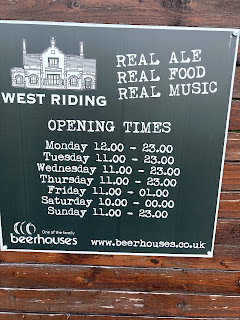 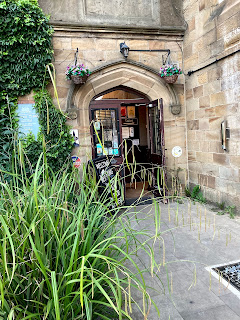 I've never found a pub as hard to leave ever, anywhere as Dewsbury's West Riding Refreshment Rooms, and I've been a fair few times.  Just a quick half of something easily drinkable, I tell myself.  I scan the ales.  Staff look at me.  Then my brain & mouth decide to totally throw a spanner in the works, and I'm well surprised to hear the words "PINT OF ACORN GORLOVKA" come from my lips.  Well, this is highly irregular.  The race was on.  Luckily, it is a stunning beer, regardless of strength, and with no other customers around distracting me with their amusing antics, it was a challenge I managed well.  The lacings tell their own story.  A perfect end to a great (and very productive) midweek BRAPA trip. 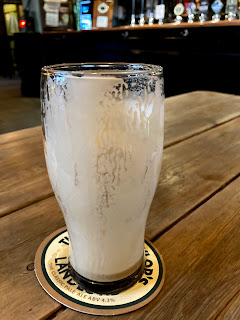 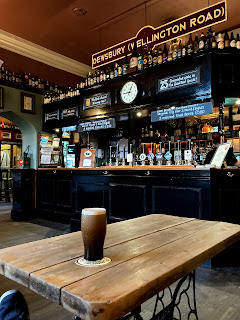 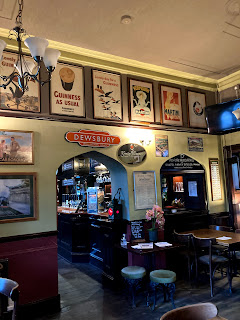 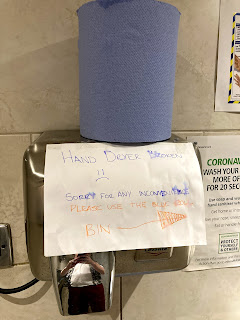 No blog tomorrow as my sista is in town, but I'll be back on Friday to tell you how I completed East Yorkshire, with a cheeky bit of South Yorkshire thrown in.

See ya then, Si