BRAPA is .... MAD AS A HATFIELD (AND OTHER TALES OF FREEDOM) 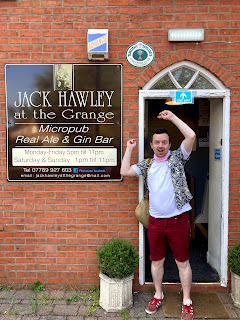 Time to celebrate the completion of East Yorkshire pub ticking, just across the border from Snaith , in Hatfield, South Yorkshire where Jack Hawley at the Grange (1881 / 3310) was lurking just out of view of the main road, up a steepish staircase.  Whilst the name might put you in mind of a gastro hunting lodge in rural Surrey owned by Brunning & Price, the truth couldn't be much different.  Blokes in Doncaster Rovers training gear and stained vests and women in strapless tops with shoulder tramp stamps all gurned in friendliness as we made our way to the bar, the house beer is fittingly called Eccentric by the always reliable Welbeck Abbey, and it is the coolest, best kept ale of the day, proof that even in 30 degree heat, cask ale can be kept well if you know your onions.   Dad takes a seat away from the crowds, at the far end of the carpeted welcoming room, slightly out of earshot of the crazy stuff probably being discussed.  A couple of Donny based real ale fans at work were a bit lukewarm with their reviews on this place, but I really rated it. 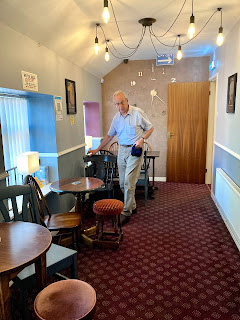 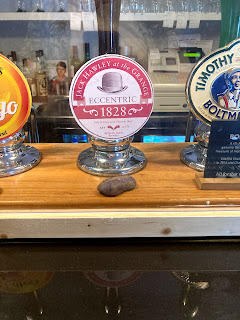 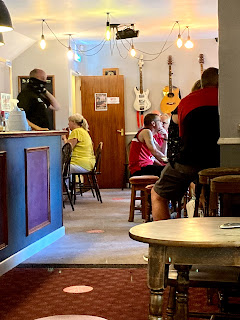 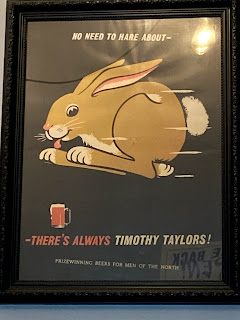 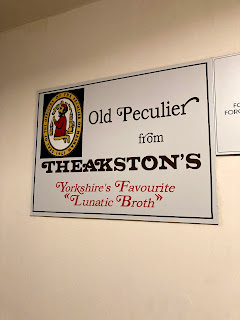 And that was my last pub before the so called Freedom Day of Monday 19th July.

I was surprised how much of a difference the end of restrictions made to my first pub experience, the following day, in York's Three Cranes. 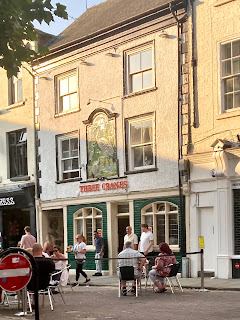 Not a Good Beer Guide pub by any stretch of the imagination sadly (though three well kept ales on today, despite the ongoing hot spell), this pub couldn't be more central, and yet, couldn't be less representative of the 'York scene'.  Where else in town are you likely to encounter 70 year old ladies in leopard print, belting out Blue Velvet or Runaround Sue?  Sixties music is ALWAYS on in here.  The scene was chaotic.  Good chaos.  A 90 year old bloke smoking in the doorway confirms this is the entrance to the pub (I didn't ask mate!) and the scrum at the bar makes me feel alive.  I have to twist my body at a weird angle to pay for my drink and take pint before a barmaid swoops across to take a tray of drinks outside.  Two dangerous looking blokes decide to have an impromptu game of darts.  Cos they can.  Despite there being not enough space.  The oche is where we are getting our drinks from.  One turns and glares at my mate, simply for being stood there with his pint.  We end up squashed against the far wall.  This is the pubs I remember.  It might take a while until we get back to these kind of scenes all over, the land but for now, this was a heartwarming reminder of #PubLife at its best. 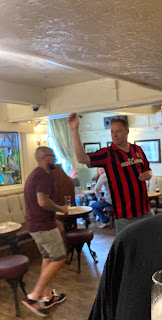 A few days later, it was time to take advantage of a slightly early work finish having just been double jabbed, so I embarked on a slightly over ambitious midweek evening trip, which if it went wrong, could leave me stranded. 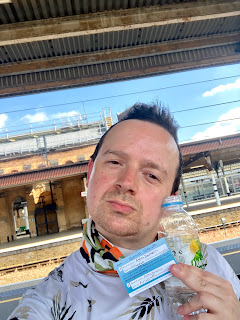 But how likely was it to go wrong?  Not like the British rail network is unreliable, is it?  Is it?

For now, the focus was on Redcar, which over the past year or two, it is possible to get to direct from York.  Was so nice to get off the train and be beside the seaside, just like that.

It seemed an interesting place, with funny stand alone clock towers and a weird corrugated pink helter skelter which the locals called 'Beacon', visible from the pub window. 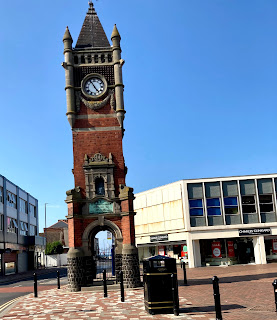 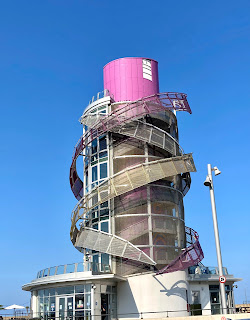 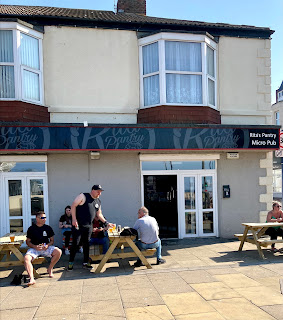 Rita's Pantry, Redcar (1882 / 3311) was an incredibly beery location i.e. people took their beer very seriously, which kind of meant the beer had to be good to make the place a success in my eyes.  I've had colder cups of tea and coffee this year, and I was left thinking cask wasn't the wise choice here.  The hot snap continued to grip us with its burning tentacles, and whilst the flavour was hoppy tropical pow-wow, it was like someone had microwaved a carton of Um Bongo for 40 seconds (800W oven).  A former amusement arcade, it was a nicely done place with slight nautical, piratey themes, but not much was cracking off, so I took my pint outside to a bench next to the local craft lovers, one of whom had a spectacular beard, pipe and chihuahua, yet was probably younger than me!  No one chatted, but I smiled at them a few times, and highlighted my GBG theatrically in case that sparked conversation, but alas not.  Time to push on if I was to get a pre-emptive in before my train north. 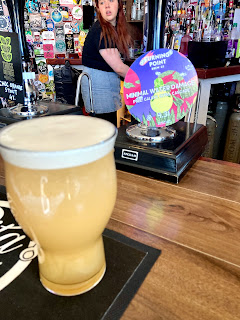 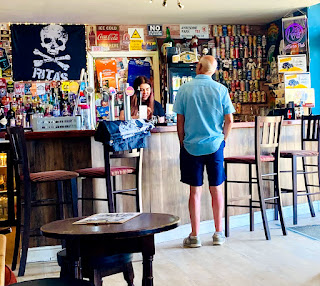 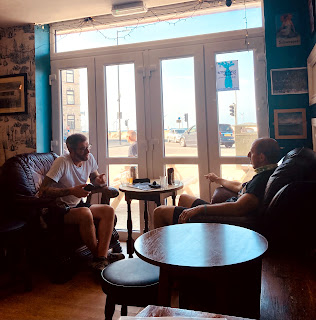 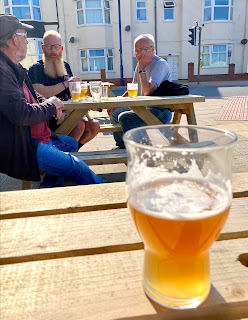 But if that was a disappointment, Redcar's non GBG micro, recommended to me by the wonderful John Depeche-Modem off Twitter no less, was quite the contrasting atmosphere. 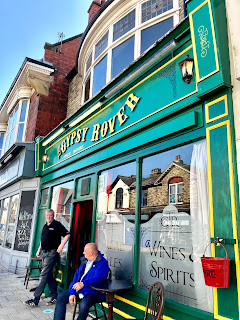 If BRAPA was a TV show, for Gypsy Rover, Redcar, it would be like we had got some Hollywood award winning scriptwriter / screenplay artiste to 'do this one', the characters suddenly a bit more well rounded, fleshed out and 'better drawn' than in your average BRAPA pub.  I cannot do the place justice, the photos may help a bit, and Helen who I think is the lady who served me saw them on Twitter, even praised my efforts as being better than the pub's own.  After all, along with completing the book, all I really want to do is take snapshots of #publife, so when I'm dead and gone, and proper pub folk are dead and gone, there'll be some kind of legacy / window to the past.  The gypsy heritage is strong here, John told me he bonded with a different staff member, Jackie 'at a higher spiritual level' wow!  He also told me a falling out with the local CAMRA where they told them to eff off (not always a bad thing) is part of the reason it isn't in the GBG.  Sadly, on my visit, the beer wasn't that crash hot either.  My Maxim Swedish blonde started well, but fizzled out to something resembling vinegar for the death throes.  But the people made the place.  From the young lady Tilly and her adorable little dog, both helping out Helen, to the bloke who asked everyone "what you havin' for your din dins?" to the friendly biker rocker couple, everyone was engaged in the pub, no one on phones, no one watching Bradley Walsh, a micro of majestic magical proportions. 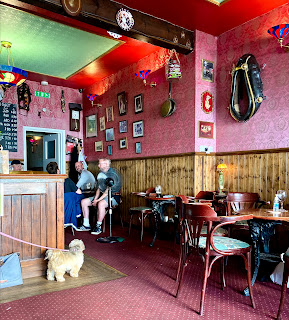 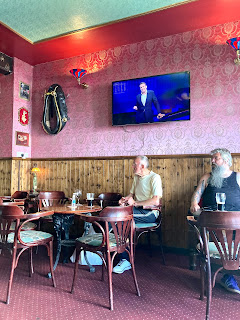 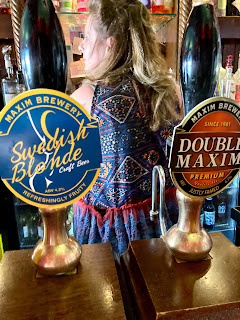 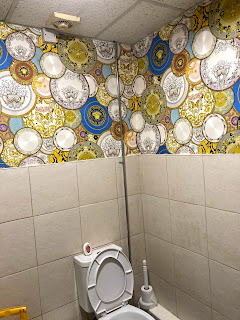 Up into Thornaby I go, where one of the greatest realisations in modern BRAPA times is just how close it is to trot over the river to Stockton-on-Tees which actually has pubs worth visiting.  I've never actually been to the Sun Inn, but as soon as it gets back in the GBG, I will!
What should've been a leisurely stroll there, pint and stroll back, was suddenly made more perilous by the road being dug up around the station, and even pedestrians were diverted the long way round.  Think I had to cross about three massive roads with traffic lights that took ages.
Into Stockton I went, missing the entrance to Green Dragon courtyard twice, where this pub was situated.  This will be the final pub of this blog as I've wittered long enough. 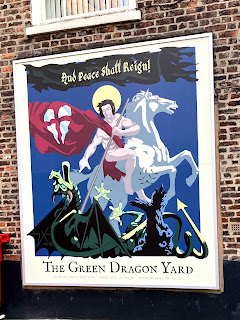 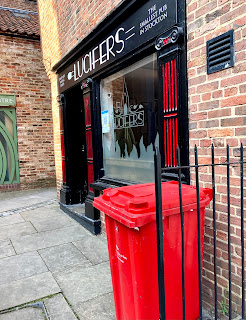 So I'm there giving it all the devil horns in the full length mirror by the 'micro toilet', when it turns out Lucifers, Stockton-on-Tees (1883 / 3312) was actually something to do with the person who invented matches, but forgot to get them patented, the silly billy!  This really was one of the tiniest micros I've ever been in (nanopub?) and despite being the only customer, I felt crowded.  The guy who serves me is nice, but not a talker, bit of an introvert, and with the short distance between us, I felt obliged to say something.  Well, as luck would have it, my chocolate cherry stout of from Yard of Ale who I know full well are from Ferryhill Station in County Durham cos I know of their pub, and Alan the owner, so I feign ignorance and ask, and he says he thinks North Yorkshire, so I say I think not, so that was a sort of chat!  He's a big stout fan, prob my fave style too, even on a hot evening like this!   Colin makes a brief appearance too, but I know I need to negotiate these roadworks and make sure I get this train to Bishop Auckland to stay on track. 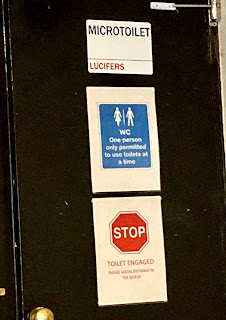 Join me tomorrow as things were about to unravel in Bishop Auckland.  No drinkable cask?  Bloke threatens to get gun cos he's been called a nonce?  Caps Off sympathy?  Shoulder massaging a man from Iraq?  Replacement bus service?  And a bit of bonus Birchanger?  It's gonna be fun.  Stay tuned!
Si