Penultimate night before 'Lockdown II'.  It was Tuesday 3rd November, and if you think I'm dragging my heels a bit with writing up these blogs, then you'd be right.  Somewhere, in a psychological recess of my brain,  it feels that whilst I have pubs to write about, they aren't quite as closed!

Spreading my wings after last night's mini-success in Harrogate, I took the train up to Darlington which had two new GBG ticks in the 2021 edition.  Ahhh remember the golden days when Tier 2 meant you could just go to a pub for a drink? 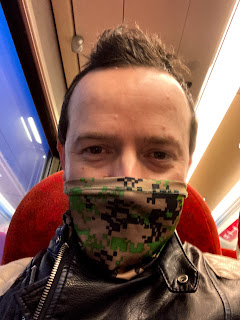 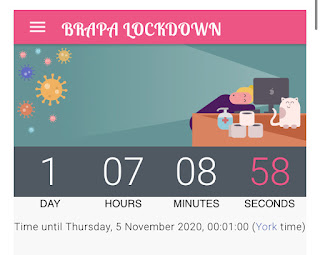 Once in the town that time nearly forgot, I had the usual arduous exit from the station which always feels like you are walking in the wrong direction, even though (and tonight I specifically asked a ticket barrier lady), you don't have a choice.
Less than two minutes walking in the freezing Darlo air, when four boisterous young lads on bikes come careering behind me.  Three overtake me on the pavement, the fourth little chubster actually says  "EXCUSE ME MUSH".  Peak Darlington already.  'Mush?'  Off a kid?   Only time I've ever been called Mush is by Daddy BRAPA when I was younger, in a cajoling way.
I have a soft spot for the town, some cracking boozers, friendly folk and proper down to earth / down at heel (doesn't really matter which).
Here was tonight's first with some sexy neon lighting ...... 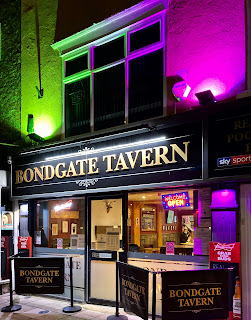 Looked a bit like one of those high street amusement arcades, but no doubting once inside that this was a recently refurbished boozer.  Done in the 'modern way', but in a Darlo modern way, meaning it still managed to smell of tobacco, sweat and have a semblance of the old school, which is why I could enjoy my 25 minutes in Bondgate Tavern (1717 / 3144).  £2 for an excellent pint of Yorkshire Legend by Helmsley.  NCBS = Yum.  "Wow, that's good" I tell the friendly landlady re the price, who explains it is extra cheap because they are trying to shift as much ale as they can before lockdown.  My card declined twice, it was possibly confused having last been used to buy a pint for over £5 in Knaresborough the previous evening.  An electronic sign whizzed across the top of the bar area "Sunday Soul Night isn't Happening!"  Well, no real surprise there. 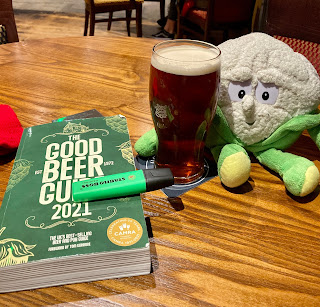 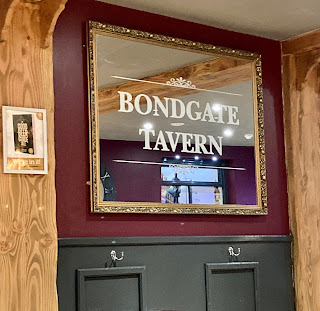 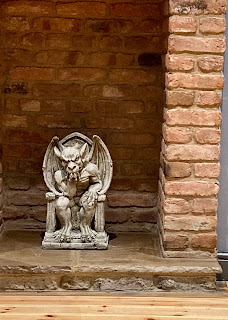 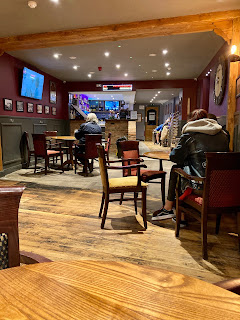 I already had designs on a late night bonus third pub tick in Chester-le-Street so at this point, I am rushing to get to the second Darlo pub to allow myself 25 minutes in there, to still have to time to get to the station and get the last train to CLS.  Getting stuck in a tiny shopping arcade by trying to take a short cut didn't help.
Two slices of luck allow me to achieve all of this.  Firstly, the CLS train is delayed by just enough time to take the pressure off, and secondly ....... wait for it ..... 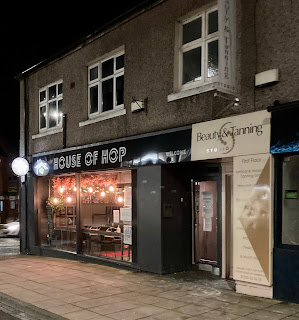 House of Hop (1718 / 3145) wouldn't ordinarily open on a Tuesday, and they only have done, today at 6pm, you've guessed it, with the idea of getting rid of their surplus ale.  She tells a confused local couple this, looking pointedly at me whilst doing so like "BRAPA, you lucky fucker" and she's right.  18:01 when I took the above photo.  After Miley in Rochford Saturday, it felt like the gods were taking pity on me with this forthcoming lockdown about to stymie my progress.  Explains why, despite having had to press a doorbell to ensure I could get seated without a reservation, I only find one customer, a young lad tapping away on Untappd.  He does have friends, he later claims, but they couldn't make it.  I must try that line when sat alone with Cauliflower.  A £2.50 pint of Three Brothers stout is perfect on a cold evening (NCBS = tasty).  She really pushed me towards it though, must be the beer they had most left of!  Lack of phone signal had me constantly paranoid the train might make up ground (after my Harrogate experience last night, hardly surprising).  All was dull until afore mentioned couple arrive.  "IS THAT A CAULIFLOWER?" shrieks Mrs Confused from across the room, and soon we're all chatting mascots, pub ticking, lockdown and stuff.  Even our new Untappd friend, we'll call him Matty Johnson cos that was probably his name, according to my Untappd stalking efforts, joined in. 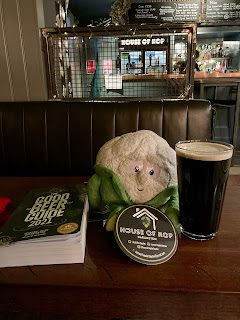 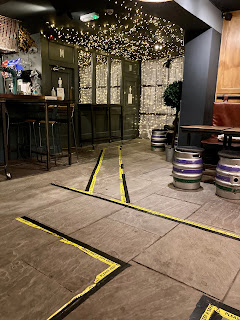 No problems getting the Chester-le-Street train, but I immediately realised there were no more direct trains back to York tonight.  There was one involving a change, but it didn't get me in til after midnight and not like you can sit in a pub til 11pm anymore.
Therefore, I spent the journey frantically Googling buses to Durham which would then allow me an easier connection and a much earlier return to York.
It didn't help that the pub was situated well off centre, but being in a cricket ground, well what did I expect?  In fact, I could have already 'technically' ticked this one, but to my mind, it was just a bit too tenuous.
Back in about 2000 when it was called Austin's, I came to watch the mighty Sabres take on Durham Dinosaurs, but we got rained off and retired indoors for probably polycarbonate pints of Guinness and lager, or whatever I drank back then when real ale didn't exist in my world.  Apart from it being busy, I have zero memory of it.
The first street I walked down tonight was truly terrifying.  Red lights flickered from behind upstairs curtains, then a huge crash as someone throws an electrical device (toaster?) out of an upstairs window. Rock & roll.  Dogs bark in unison.  I pass an 18 year old Dad, smoking on the porch.  He inhales deeply, looking totally relaxed, when the door flies open, his girlfriend/sister shouts that little Jayden and Ebony need putting to bed, and then I hear a tumbling down the stairs, then a child screaming, Dad stubs out cigarette, mutters something under his breath, and races inside.
Moment of the evening?  Possibly.
A bit like the Broadwood Stadium at Croy, Durham Cricket Club is situated off an awkward roundabout designed to kill you if you cross at the wrong time.  Zero traffic at this time of night means I live to tell the tale. 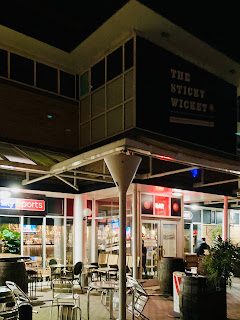 Sticky Wicket, Chester-le Street (1719 / 3146) was a vast soulless echo chamber, more like a large function room / bar style venue.  More plasma screens showing sport (mainly cricket of course) than your brain can take.  On arrival, I'm shuffled around the first corner, so I'm almost blocking the screen that the bloke behind my fat head is watching.  He scowls at Colin, but settles down when his supper arrives and loses himself in pie and gravy.  I ask her what real ales are on, and she furrows the upper part of her face like I've asked where Aristotle hid the Golden Chest of Babylon (plot twist, the answer is Babylon).  She returns to tell me Camden Pale or Neck Oil are "both very nice".  Hmmmm, that doesn't sound darren casky to me, but gotta roll with punches in these 'difficult times' so I get the Beavertown.  Behind me and gravy bloke, towards the loos, quite surprisingly are three kids spinning around, dancing, whilst eating huge ice cream sundaes. Their Dad laughs like he means it.  He won't be when their puking later.  Time to run for the bus. 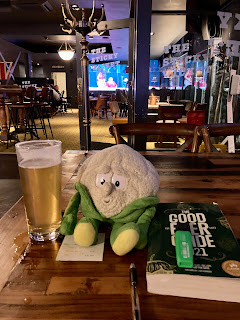 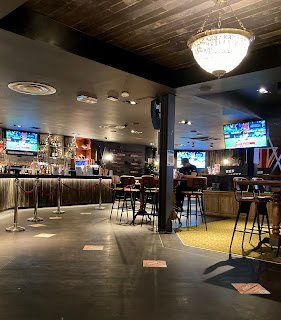 Even with a slight jog, I hadn't quite given myself enough time to get the bus I was aiming for, but in another slice of BRAPA luck tonight, the buses were coming back in the direction I was walking from, so was able to pick it up at the Black Horse stop instead.  Only two mins, but made all the difference!
All aboard the Angel 21 for a games of Snakes & Ladders ...... 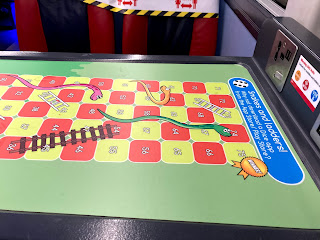 .... and I might've even had chance for a last orders half before the train to York, but the Waiting Room was totally shut.  I walked round to the lovely Station House, but even though drinkers were in, they'd put a sign up, so I just loitered in the bushes for a bit(!) until my train was due.
Successful evening, one more night to go, and with Daddy BRAPA at the wheel, surely it'd be a straightforward night of ticking?  Right?  Wrong.  Join me on Saturday night to find out exactly what happened.
Cheers Si