The 2021 Good Beer Guide 'cross-ticking' exercise had been completed the previous Thursday, but it was not 'officially' released (to the general riff-raff like yourselves) until the following Thursday.

This meant CAMRA had placed a big 'Embargo' stamp across my forehead, so I travelled down to South Essex in the stealthiest way a bloke with a fluffy cauliflower could manage.  My GBG ticking would have to be done 'under the table', my Twitter check-ins seen as 'pre-emptive' and my general demeanour, Lady Gaga-esque i.e. p...p... Poker face.  No numbers against today's check-ins either.

Now, if you want an example of how frustrating this pub ticking game can be, our first tick provided it. I'd been in Leigh-on-Sea as recently as 19th September, and here I was, back on 24th October.  I'd not been expecting that!

I needed no map, and nodded at the cockle stall holders like they were old friends as I made away along that fascinating estuary style seafront.

Back in September, I'd done the Crooked Billet, and then the Mayflower.  I remember walking straight past the Peterboat thinking "gosh, that looks rather frightful".  And here we were, just over a month later, Crooked Billet had been binned, replaced with the nearby Peterboat.

The relative lack of tourists today was a relief, as the grey autumnal breeze whips around my lug 'oles, and the first (unofficial) 2021 Good Beer Guide tick comes into view ....... 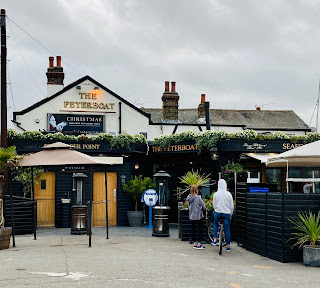 It's not long gone 11am, and I am the first customer at Peterboat, Leigh-on-Sea and the duo you see in the above picture were simply loitering to make my entrance that little bit harder.  A huge conservatory is awash with busy staff.  I hear one of them comment "we are VERY booked up, and I'm bit worried about the wind!", but I quickly shrug off any feelings of guilt the one-pint-getting-under-their-feet-visitor might feel, and am checked in under the surname Averett which is a new one on me.  With knives, forks and little plastic flowers on every table, I realise this is very much more restaurant than pub, but the staff chuck all the paraphernalia aside and sit me swiftly down, as a bearded European bloke brings me a fantastically kept pint of Leigh-on-Sea Kursaal Gold - so the 2021 GBG has passed its first test!  I was about to think 'at least I'm here before the dining rush' but by 11:45, the first two tables are already wolfing down their lunches!  The woman nearest me with an air of Margo from the Good Life is moaning to her husband that they've not been seated in the window.  Check yer (GBG) Privilege (Scheme) lass!  Whirlwind waitress and all round good egg Jayne tells the couple the secret to staying active through long shifts in to have a plate of rice for breakfast.  However, she's never heard of Kedgeree.  I'm shocked, and Fake Margo certainly is.  Jayne loves Colin, so soon comes over for a chat and a piccie.  She's so good, I really wanna mention they've made their GBG debut, but can't.  She's a bit deaf from working in nightclubs for so many years, but such a people person.  I'd never expected the Peterboat to become a winning experience, and yet it had. 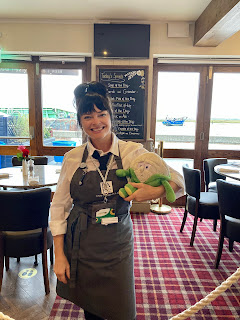 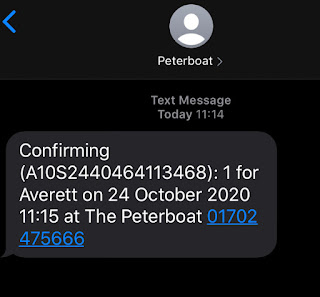 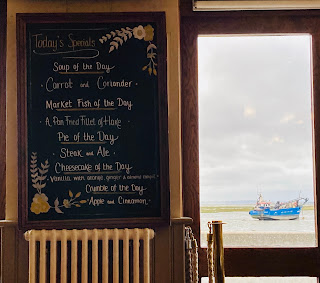 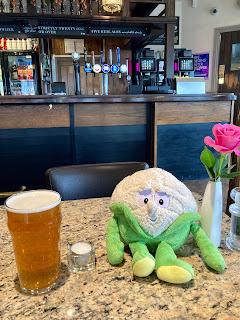 After paying, saying goodbye, and wrestling with a toilet door, I walk uphill towards the buses and catch one to this place called Westcliff-on-Sea which is almost in Southend, but not quite.  It is only three miles, but the heavy traffic means it is slow going.  I would've walked, but every second counts when you're not staying overnight.

I'd been to Westcliff before a Southend away game in Jan 2003, and accidentally ticked off the Cricketers, which remains in the GBG to this very day.  I'm surprised, as I remember it being quite a shiny, kitcheny Greene King type of place, but perhaps things have changed for the better.

The next pub was just around a tight corner ...... 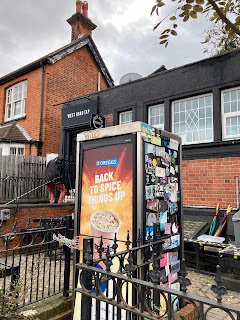 At least this one had been in the 2020 GBG too, which I felt added an authenticity about proceedings.  You may just be able to spy a slightly bow legged orange trousered dogger (well, man with a dog I should say) arriving at the same time as me.  He's the first customer of the day, and my first task is to tell the owner "I'm not wiv him!" and I sit indoors, whilst he goes out.  West Road Tap, Westcliff-on-Sea, here we go!    I seat myself on a rare bit of cushion, feet resting on a pipe, get the one real ale on (Five Points Best Bitter, National Beer Cauli Scoring System = tasty), pub temperature is good.  With the guv'nor doing important laptop micropub owner stuff, I decide to phone home, ET style, which is important due to breaking news that my sister's boyfriend is seriously ill in hospital with Covid!   On the mend now am glad to report, but breathing difficulties still.  "HE'S GOT GREEN URINE??" I exclaim rather too loudly, and Colin looks over like "yeah, what of it?"  By now, a couple have arrived and the bloke is a friendly chatterbox, which brings everyone out of their shell.  His opening gambit to me is to tell me how highly qualified his wife is!  I resist the urge to say "well done dear!"  As Violently Happy by Bjork plays , the place is almost rocking, and the owner tells us this building used to be a ladies public loo.  As I sup my Five Points, I can now imagine how many women have pissed in this very spot.  Some men would pay extra for this.  Then it became a juice bar!  Are they making this up?  They've recently opened the Gents loo next door, as a side bar.  Is that a different GBG tick?  On the way out, the bloke offers some sage advice.  "People in Essex will talk to you .... they might not make the first move, but once they get going, they are really friendly".  I can already see this to be true from my limited visits to the county, which I'm really enjoying so far. 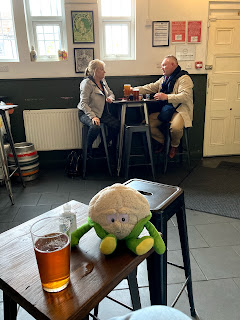 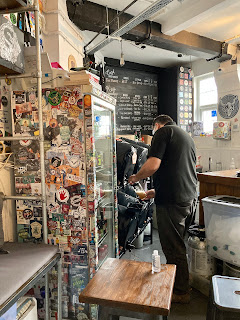 Not far from West Road Tap, a GBG debutant (or do I mean pre-emptive) was asking for a good ticking ...... 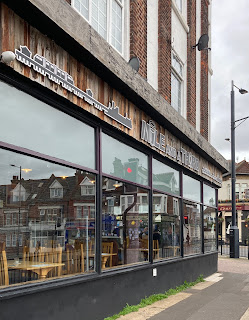 Mile and a Third, Westcliff-on-Sea was the pub in question, and yes, I know facemasks make communication that little bit more difficult, but the long haired guy who 'greets' me here seems pretty much a mute!  He indicates the signing in and sanitising station in what was almost a mime, and then walks off looking over his shoulder.  'You want me to follow you?'  Was a bit like Skippy the Bush Kangaroo or Sooty greeting you.  He hands me THREE laminated drinks menus. Cask ale?  He points at a few options, I say 'yay', he nods, and walks off to get me a drink.  Serious Rat Race vibes here, and I'm talking Hartlepool Micros.  The music is very interesting, classic 80's rock and a bit of metal.  = I have to Shazam some tracks to explore further!  Extra interesting, as it isn't in keeping with the general vibe.  There are two autumnal trees inside the pub, fake stonewall wallpaper, the clientele seem to me to be more your Costa Coffee types, and yet, the sum of the parts somehow works! All helped by a quality stout (NBCSS = yummy).  On the way out, I think I even detected a raise of an eyebrow and effervescent smile.  Lovely.   Southend here we come!  Don't ruin my day. 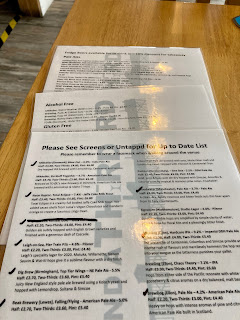 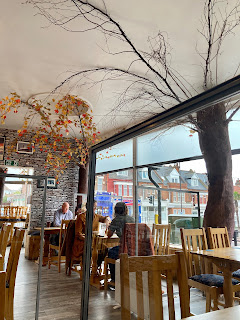 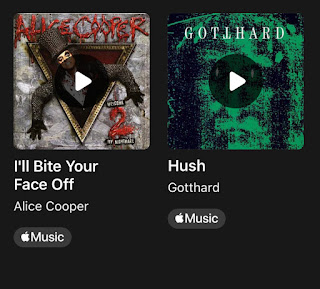 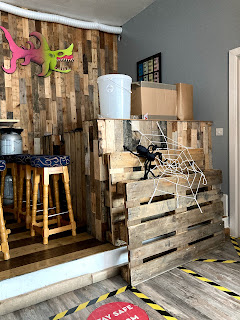 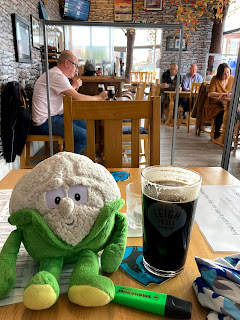 I'll be back on Friday, similar time, to tell you what Southend was like, plus a fabulous Leigh-on-Sea finale, and a bit of the old ESB of course.
Until then, good night, don't let the bed bugs bite.
Si