BRAPA and ..... MILEYS OF SMILEYS (Hallowe'en in Essex)

Off the bus from Ballards Gore and back into Rochford, the rain still teeming down, my first act was to nearly get run over by a dodgy white van man (is there any other type?)  His surly expression unforgiving of his relative dryness in comparison to myself.

The biggest revelation of my journey down from York to London earlier (apart from impending Lockdown II) was that my next pub reopened TODAY for the first time since July 4th.  Sometimes I bemoan dreadful bad luck in my ticking expeditions, this was quite the opposite. 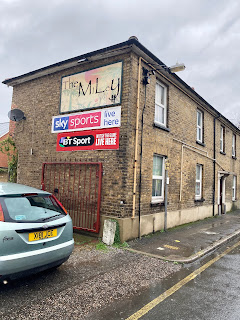 In true South Essex 2020 pub tradition, we played 'hunt for the entrance' which is always the least likely looking door buried deepest in the bowels of the premises.  Aesthetically speaking, Miley, Rochford (1711 / 3138) isn't perhaps one for the purists, pitching itself somewhere between sports bar, WMC and 'venue' whatever that means in 2020.  It is irrelevant anyway, when you consider the warmth of humanity within.  I'm greeted by lovely landlady Louise, and become the first person to sign their guestbook, second customer.  We have heartfelt chat about today's announcement, the hard work getting ales back on, which will now be wasted, and how the decision to delay re-opening for so long was based on an elderly mother and three year old daughter.  I did a lot of sighing and platitudes like "ya couldn't make it up!" but not much you can say in these circs really.  They may as well have taken a 'wrecking ball' to the place.  Their poor achey breaky hearts!    Like the Golden Lion before it, the card machine is a busted flush,  she ends up phoning this man to come and have a look at it.  Must be something in the Rochford air.  The Spooky Moon ale is going down well, the bar is filling up with excited locals in West Ham and Liverpool shirts, and soon the afore mentioned daughter Tiva comes over to say hello, gives Colin a good curious stare, and introducing him to her Tiger, which doesn't really have a name.  Mr Miley is playing games with her, and when I comment I'm particularly fond of the Tiger because I am a Hull City fan, he tells me where it all went wrong for us.  The Allam's of course surely, but no, apparently our decline started when we sacked Phil Brown.  Well well well, that's a new take.  On the way out, I drop my hat and when I emerge from toilet, bloke in Liverpool top is waiting in the rain to hand it back to me.  Yes, even the plastic scousers are top people in this wonderful bar, and I wish them all the best for the future cos they deserve it. 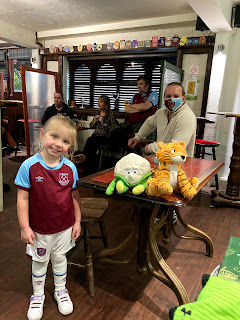 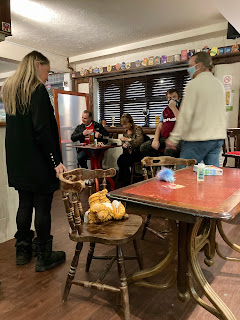 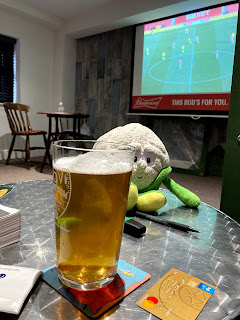 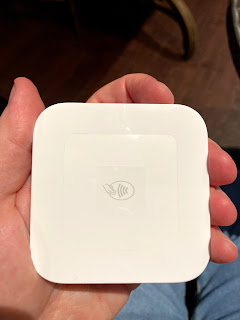 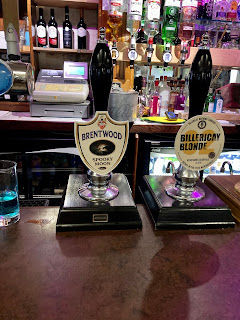 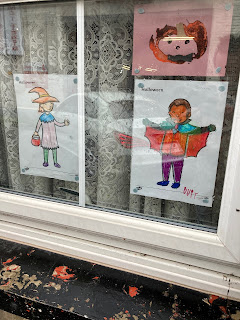 Next, a trip to the recently visited Brentwood, which involved a change of trains at everyone's favourite Essex/East London interchange, Shenfield, which would be a really handy place to pop a GBG pub (just saying for future reference, thanks).
My mood improved even more when I saw a fleet of taxis outside the station, as buses to nearby Herongate were a bit sparse.
However my mood was pretty downcast by the time we reached the pub.  It all started when the driver sneezed and did the whole "don't worry pal, it ain't Covid" charade.  That somehow segued into a tale of woe re two mates of his dying, not due to drugs, but weakened by drugs, and vivid descriptions of the funerals, anguish on mother's face etc.  Add to the mix the fact he was a reformed alcoholic and was silently judging me for pub ticking.  Okay, so I probably shouldn't have said "I nearly said I'll invite you in for a pint, lol!" but when he didn't laugh, I immediately felt guilty enough to give him a tip he scarcely deserved. 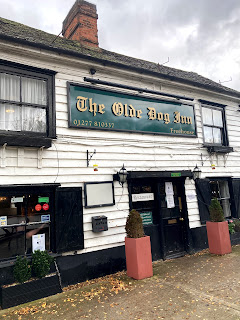 So perhaps my low mood contributed to the reason why I found the Olde Dog Inn, Herongate Tye (1712 / 3139) such a crashing disappointment.  Well, perhaps that is a bit strong, but utterly dull.  I was swooped upon on arrival, and taken around the very first corner to a table facing away from bar, action, walls surrounding me.  The house ale didn't really hit the spot, they had a doggy themed area called the 'dog house' and for all the talk of a 17th century weatherboarded freehouse, character and atmosphere seemed to be in short supply.  The two couples within earshot were typical Essex quirky friendliness, shouting the odd pleasantry in funny accents, and saying things like "enjoy it while you can, you 'eard about this announcement then?" and  "No wan's gonna wotchit cus we're all ganna be daaaaarn the pab innit fella!"  I laughed along, but the only real moment of satisfaction was getting out the green Stabilo and highlighting my final pab (sorry, pub) in that South Essex region.  Onto mid-Essex next. 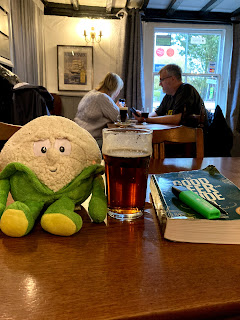 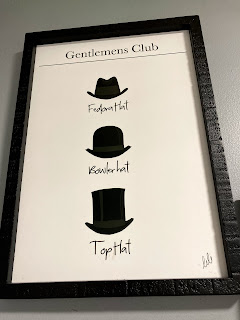 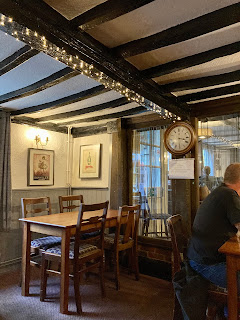 I had to walk pretty quickly to make the bus connection at Herongate, about 15 minutes max, and after some more jiggery pokery in Brentwood, I was back en route through east London looking for two more pubs.

The good thing about a brand new GBG is suddenly you have 'options'.  By the end of the 2020 GBG, I'd have had to have another stab at risky Upminster, or get back to Central London and do some faffing about to get something south of the river.
Now, I was spoilt for choice.  Well, I had two new Wetherspoons to do anyway!
Ilford was first up, a place I'd only ever been to for the wonderfully weird but somehow great Jono's.  Could this compete? 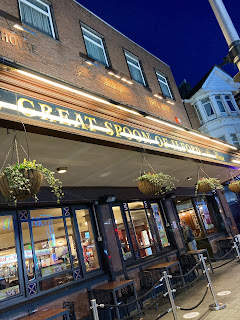 Great Spoon of Ilford (1713 / 3140) was rather less memorable.  I smiled at a bloke in a turban who scowled back, the carpet was lush and red, staff were incredibly chirpy and attentive for a chain relying almost 100% on the GOAT of Pub Apps, the Wetherspoons one.  Fuck you Wadworth, sort yourselves out.  Good job they were attentive, as my beer was dire.  Where is a plant pot when you need one eh?  I did something forbidden and took it back to the bar and no one told me off, so I loitered and got a very nice Adnams Ghost Ship as a replacement.  I'd only gone Hobgoblin cos 'it felt right' on Hallowe'en.  I'd not even realised Ghost Ship could be classed as a spooky beer.  The heat coming off the radiator positively radiated.  Guess that's why they call them that.  And just when you thought things couldn't get any spookier, I receive a random phone call from cheeky Sussex chappy of gammy leg fame, John Depeche Modem.  He rambled on like he does, all very pleasant and an entertaining way to pass the time in a fairly dull 'Spoons but I had to curtail him if I was gonna get a sixth tick in, which now seemed imperative with Boris's presser looming. 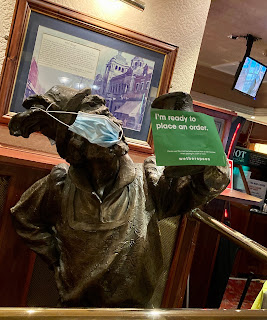 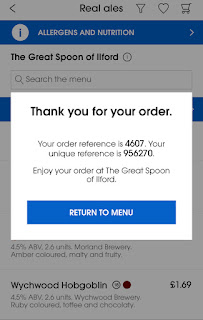 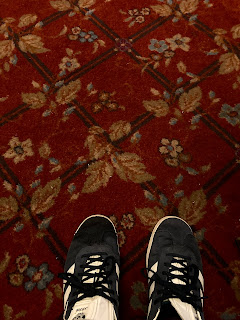 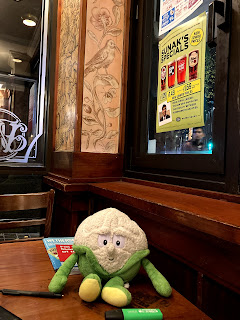 My final pub today was listed under Stratford, but luckily, I went on Google Maps just as we came into Maryland (home of the Cookie, not the lager variety) and realised this was a much better place to get off.  Go, go, go, I said outloud, scaring passengers as I desperately press the button just in the nick of time.
What I wasn't prepared for was a queue snaking around the block! 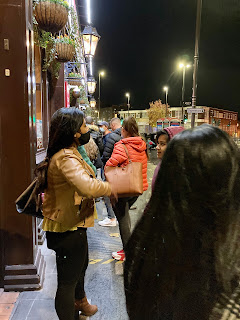 Uh oh, this wasn't in the script.  I looked at my watch anxiously, but decided to stick with it.  If I missed Parcel Yard ESB, I guess it wasn't the end of the world.   Sob!  Queue did move at a fairly good pace, as two masked doormen helped people track & trace, hand santitise etc.  I was the oldest person in the queue, some had Hallowe'en fancy dress on, some seemed to be there for a final Saturday pub hurrah for a month, and quite a few were ID'd on the way in.  A decent camaraderie developed with people helping each other scan the QR code on their phones.  When it got to my turn. he eyes me up and down doubtfully.  "Just a drink?  Just you?  Okay, but you'll have to sit outside!"  But then again so was everyone being admitted to the pub.  Not one seat available indoors.  Rammed, in a social distanced way.  Phew, welcome to Goldengrove, Stratford (1714 / 3141).  I got myself seated, ordered.  Drink took what seemed like an AGE to arrive.   Interesting atmosphere.  People guessing each others weird Hallowe'en fancy dress.  Barmaid dressed as Where's Wally finally brought me a stout and apologised for the delay, but how could I be mad?  Ali G sat alone in a smoking booth.  Bloke in Guantanamo Bay get-up got himself trapped in the door and had to be freed!   And someone from a cult teen film I'd never heard of impressed a group of ladies.  All the while, you could here the none fancy dressed crew murmuring "press conference is on now .... yep, yep, lockdown confirmed.  Another drink?  We'd better!" 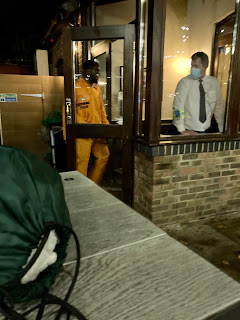 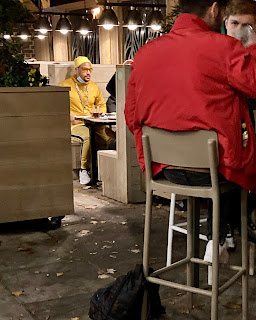 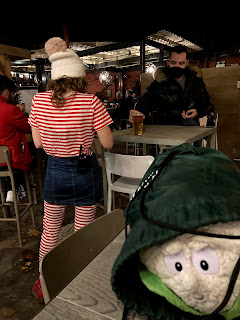 Determined to get back to the Parcel Yard in time for a swift ESB before the train north, I leapt through the Underground network like a gazelle.  My friend and travel expert Tom Irvin would have been proud the way I barged loiterers off escalators and took gambles on whether Tubes were heading in right direction.
I was rewarded, almost, with my now regulatory seat in the middle of the main room.  Sure the staff recognise me.  Now that is a bit embarrassing in here.  But no ESB, noooooo!  Had to go London Pride.  Unsatisfactory.  Not that it wasn't good Pride, I'd just had my heart set on ESB.  Colin donned his devil horns and hit the limited edition Jalapeño Mini Cheddars.  Stinging Cauli ring first thing? 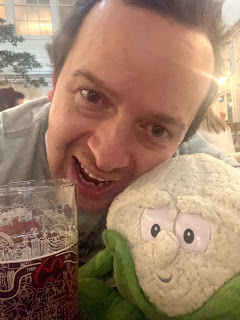 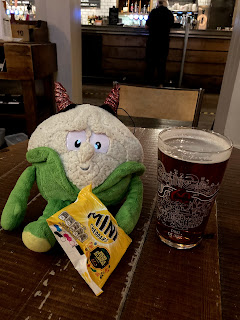 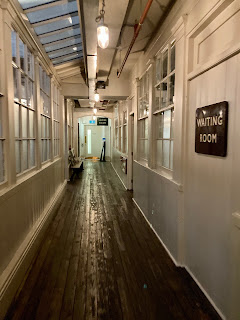 Last pint in a pub til December?  Not on your nelly!   On the journey back, I was joined for bit by fellow pub ticker who doesn't make a song and dance about it like me, the lovely Eddie Fogden, and we had a nice chat I can't remember much about.
But my subconscious was in overdrive, planning what I could fit in before Thursday 5th November 12:01am.  Join me on Monday evening for part one of a three part pre-Lockdown special.
Si
Posted by Si 'BRAPA' Everitt at 8:52 pm