With Westcliff greened off, it was time to hop aboard the train to Southend where, despite thousands of football visits to Roots Hall over the years, I'd not done two of the three 2021 GBG ticks, both of which remained in this edition, having also featured in 2020.

I'd done the giant impressive Last Post, the Bell near the football ground, the fantastic Cork & Cheese in a shopping centre, and a nice modern one with Trout in the name, plus a few others I forget.

Good piece of advice from the bloke in charge at West Road Tap - for the first one, I was best getting off at Southend East.  Southend has an east?  Well, well, well.

I walked through the mean streets (well Lovelace Avenue for example) and past such delights as Kink Hair, Grumpy's Diner and a pop up Fireworks classic, nearly that time of year of ...... 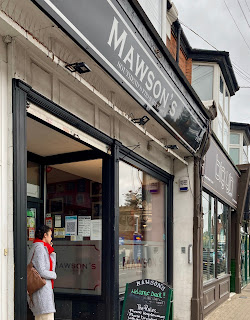 I had to turf above lady out of doorway, she'd decided this was the best place to get a phone signal.  So how do we rate Mawson's, Southend then?  Awesome, or boresome?  Well, neither really.  After the increasingly common sight of being required to sign a paper guestbook because the NHS Test Trace seems to be widely distrusted, and one of the runniest sanitisers ever, I impatiently wander forward to the bar just to make sure they know I want serving, before being predictably shown to a seat.  This was the 'pubbiest' venue so far today, deep red walls, warmth and sci-fi conversation, hell even the West Ham fans were nerds.  I thought they were all Grade A hooligan class.  Music by Hall & Oates, yes, for a Micro, this was reassuringly boozery.   So what did I have to moan about then?  Well, the beer surprisingly.  First one had gone off, so he has to come back and remind what's on again.  One of the problems with table service.  This one tastes like compost, in a slightly health-restoring way, but the fact it is served in a lined glass, yet still filled to the brim (meaning I have well over a pint measure) isn't particularly welcome.  The couple behind me have the same scenario, first beer off, have to order another.  As he walks past the second time, he glances furtively at me.  'Alright mate, I ain't the beer police!'  Frustrating really, cos a quality pint and a bit more interaction could've made this pub of the day. 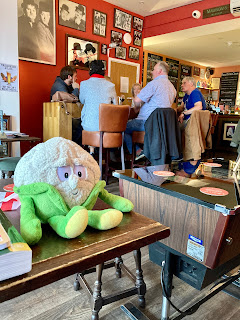 I hopped back on the train to Southend Central, where the next pub was visible from the platform, which makes sense as it had 'Railway' in the name. 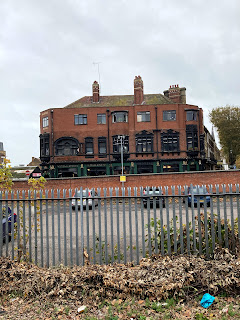 A more adventurous BRAPA day would see me impaling myself on railings, then dragging my blood soaked frame over the brick wall, cos always best to get to pubs 'as the crow flies' which is why I'm looking to the advent of jet packs in the coming years, but sadly not soon enough for the likes of Taylor and Mackay to witness the benefit.
So yeah, frustratingly, I had to walk around a few corners to get to this point ...... 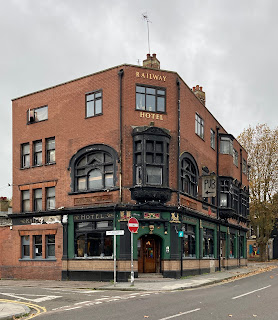 A couple of people commented that the above pub photo represented the perfect example of a beautiful original pub (bottom green section) spoiled by an unwise tag on (the upper bit).  I agree.  It would prove an incredibly apt point, as my entire pub experience at the Railway Hotel, Southend could be described as fabulous on one level, dreadful on the other.  We'll focus on the fabulous first.  The pub interior, very impressive.  The colourful, quirky staff and customers were wonderful.  Like a cross between an asylum, and my walk-in wardrobe.  The quality of the Ghost Ship, superb.  But talk about shooting yourself in the foot.  I was instructed on arrival to download the App, despite the lack of customers and huge amount of staff doing nowt but chatting.  This App was called 'Swifty' and is up there with Wadworth and Ordery for least intuitive Apps to navigate.  They all need a good Wetherspoons lesson these Pub App developers!  I complained when she brought my drink, but she said Boris rules (not as in 'Boris rules O.K.' , but 'the rules of Boris') and then I totally invalidate my argument by saying "and how do I pay?" when the whole point of the App was I pay there and then.  I KNOW that, but this was a reminder this was my demonic 5th pub of the day.  Dickhead Si.  Oh, and the gorgeous beer was ruined to a large degree by serving me out of a polycarbonate receptacle.  Light as a feather.  I was later told this is a licensing issue because they are such a live music hub, but surely to goodness in these times where live music is not likely for some time, they have a stash of real glasses they can utilise?  Felt like for all the pubs assumed air of boho chic, free lovin' hippy fun, it was one seriously inhibited by some silly rules. 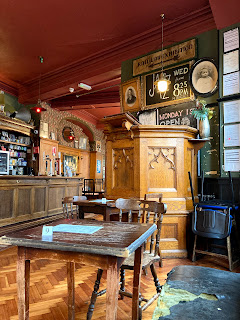 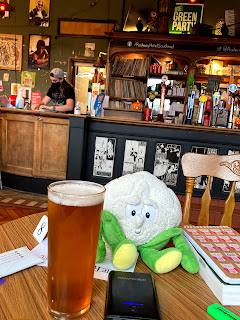 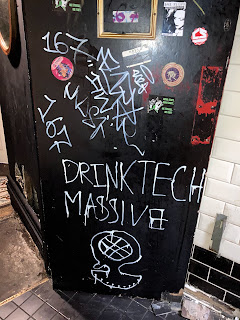 I now had to walk to Southend Victoria bus station for my final pub of the day, and if there'd been the odd sign of my drunkeness peeping out, it was apparent to me now as I spent ages trying to my north from south, east from west, left from right, and arse from elbow to work out how one would catch a bus in the direction of northerly Leigh-on-Sea.
Luckily, a kindly driver told me I was doing it all wrong and it suddenly became obvious what I should have been doing all along.
I pressed the button just in time for the Progress Road stop, and soon I'm getting lost amongst industrial units, down the wrong side of a fence.
I even took a video of my 'progress' (haha, see what I did there?), which caused five seconds of amusement on Twitter.  I'd put it here, but videos never work on Blogger unless you give YouTube a poke in the guts.
My sister is recovering from Covid, so I sent it to her to lift her spirits, and I got this semi-positive feedback ..... 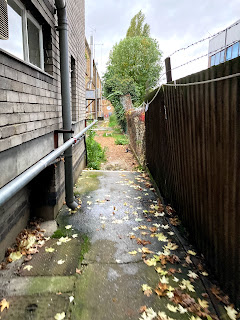 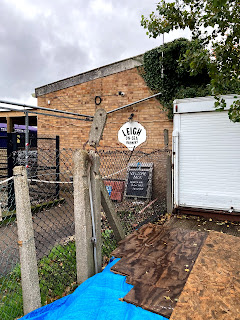 Leigh-on-Sea Brewery was, for me, a perfect place to end the days ticking.  It is not trying to be the Holly Bush or Makeney or the Eagle & Child in Staveley, and once you get your head round that, you'll love it too.  The hours I'd looked up said it opens today 1-6 but when I arrived, just gone 5pm, the lovely Ian (who'd been expecting me due to my Twitter posts in this direction) had almost given up on me, and was already to close up and go home because the closing time was actually 5pm!  Brilliant of him to not only hang around and be the perfect host, but also to buy my pint for me.  Only the 5th time this has happened I think in BRAPA history.  I suppose it's kind of his fault I was a bit hazy by this stage, for I'd already had pints of Leigh-on-Sea beers at both the Peterboat and the Mile and a Third.  But it is funny what a face-to-face conversation can do, and I suddenly felt a real sobering clarity washing over me as I drank my third L-o-S pint of the day, which I think was the below Boys of England.  National Beer Cauliflower Scoring System = yummo.  And with the strong winds whipping the autumn leaves about and making metal doors go clunk, there was a wild, atmospheric last orders feel to proceedings.  Ian later told me I can take credit for them extending their opening hours on a Saturday, which I think are now til 8 (well, that didn't last long sadly!) All the pubs today had good and bad points, but here was one experience where I could feel truly happy with, and I'd saved the best 'til last. 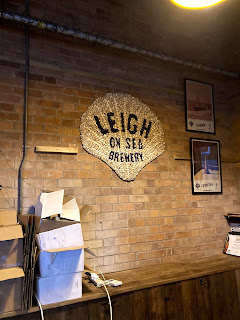 My lack of clarity returned as I got majorly confused again trying to catch the bus back to Southend.  I annoyed a young chap who just wanted to have his headphones in and not answer my questions.  Then I furiously tried to flag down an out of service bus.  When I got on a proper lit up one, I slipped on a wet leaf but kept my balance and paid the fare, all in one movement, which sobered me up again!
By the time the train reached London Liverpool St, I was on a quest to get to King's Cross as speedily as possible because you can probably guess what I wanted to achieve before the long train north.  Yes, ESB in the Parcel Yard time, woohoo ......
Train back seemed to go smoothly from what I can remember ...... 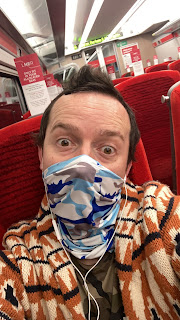 And I was all nicely tucked up in bed for midnight.  Great day, Essex strikes again!
Join me on Sunday evening, where I'll be telling you about the night I went to Selby.
Thanks for reading, Si