Monday 2nd November 2020 and it was now a race against time to bolster my pub ticking numbers before 00:01 Thursday when nationwide lockdown would shut everything down for a month.

I'd contemplated a Sunday 1st trip, but Essex paralysis hit hard.  With no time off work, all I could do was run down to York railway station on the Monday, Tuesday and Wednesday as soon as I'd logged off at 4pm.

Of course, I had to avoid Tier 3 regions, make sure I could get done what I need to before 9:20pm last orders, and check the pubs were actually open, which on a Monday especially, isn't a given.  It really did feel as though the net was closing in, and I tell you this now so in 100 years time when historians are remembering this period in time, this blog will be of special significance.

I kept it as simple as I could, and Platform 8 took me to Harrogate and Knaresborough.
Harrogate first up.  A town where locals walk around with pursed lips, firm jaws set to grim satisfaction, noses tilted upwards to indicate fine Georgian architecture.  Peer into a workshop and you will see a middle aged cat lady weaving a purple hemp cardigan whilst her Beard distils elderflower gin.  It is unbearably 'nice' and strangely arcane.  The inhabitants are like characters in a managed stage production.  Every county has a Harrogate.  Stamford, Dorchester, Hebden Bridge, Chorlton-cum-Hardy, Ely, maybe even Falmouth.
If you are of the same mind as me, heaven help you, Harrogate is best visited on a weekday night between the months of November and February.  Pitch black, rain sheeting down in torrents, as it was tonight.  Pull your hood up tight, light a Woodbine, you could almost be in Dewsbury. 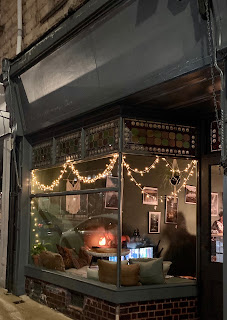 'Blink and you'll miss it' barely does Disappearing Chin, Harrogate (1715 / 3142) justice outwardly, easily the most impressive of Harrogate's plethora of recent dull GBG debutants.  I'm always on the look out for a pub to challenge my prejudices, and this one achieved it with a strange aplomb.  If we are handing out awards for 'darkest pub' of 2020, this would be the winner.  Give me a dark pub over a bright one any day.  The staff are impressively personable, and a barmaid with a sort of hurtling inertia greets me warmly.  I'm plonked into this ridiculously elaborate window seat you can see above.  I'd have only been slightly surprised if an African Tribal Leader had appeared, and decanted a litre of Um Bongo into a ceremonial cup, this was the kind of vibe I was getting.  One ale on, she laments.  "Good with me" I reply, channelling my inner Martin Taylor.  Of course, no point putting fresh casks on this close to lockdown.  She starts talking me through the keg alternatives, but then suddenly halts and says "do you even drink keg beer?"  I must be turning into a peak CAMRA type, oh the shame.   She also has a reluctant puppy that, unlike me, will not 'sit' when instructed.  Conversation amongst the barflies is seriously beery.  The affable barman told this tale "I recommended the marshmallow peanut stout to this one guy who wanted something dark ...... and then he went for the whisky cask cider!"  Cue much guffawing and probably eye-rolling, it is dark remember.  The place smells sweetly of rotting pumpkins and incense, a heady concoction when you notice your train in delayed by 40 minutes, order half a crafty ale (to defy the doubters!) , notice train caught up 20 minutes, so you've missed that, and have to order a THIRD beer.  Yes, circumstances meant plenty of time to get comfortable.  Conversation turned to more accessible topics like Mini Cheddars and L**ds Utd. The nicest barfly then dons surgical gloves to inspect a fridge of craft cans at my feet.  We have a few nice words.  Barman joins in.  This doesn't feel like Harrogate any more.  As the blokes talk about the perils of "massively over dressing for a beer festival, tee shirt and jeans would've done!", a group of loud young ladies by the bogs get smashed.  Harrogate is a rare northern example of Tier 1, and it is suddenly very noticeable to me.   I've rambled on enough, though I did stay here for much longer than planned.


The next train is delayed too, and suddenly, I'm in some doubt as to whether I'll make it to my Knaresborough pub tick before the last orders gong reverberates around the pub (or in post lockdown world, a timid mouse scurries between tables whispering 'we're calling last orders now, squeak, would you like any final drinks, squeak squeak?')  But then again, I guess people can't pile to the bar!
I'm amazed by the sumptuous interior of Harrogate Station's waiting room.  I cannot stress how unusual it is to find an indoor one open at this time of night, let alone anything other than a cold metal bench and a bin.  This had leather seats, a book case, plants, a heater.  What does it say about a town when your station waiting room is pubbier than 80% of your GBG entries?   Truth. 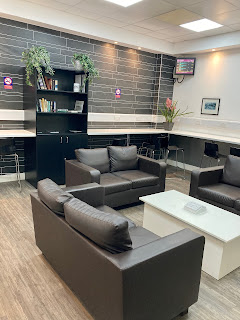 Before I could get too comfortable, the train was upon us, though Mummy BRAPA chose this moment to ring me about Christmas present ideas!
As I skidded down a cobbled steep path from the station, the rain was still absolutely pelting it down and I had to tell the Mumster that whilst it had been a lovely chat, I had a pub to tick.  Here it was ..... 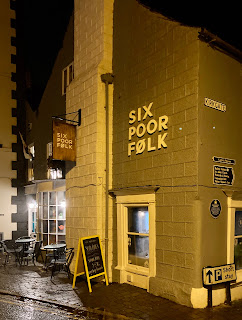 Their most recent Facebook post had Colin quaking in his cauli boots ......
I love cauliflower cheese.  But this year,  I guess Christmas dinner could potentially be a bit awkward.  It'd feel like cannibalism.  Anyway, Six Poor Folk, Knaresborough (1716 / 3143) didn't leave anywhere near the impression on me of Disappearing Chin.  It was identikit loud, bright, jolly. Formerly a restaurant, you could slightly sense that, certainly had that 'craft kitchen' feel.  Left me a bit flat.  Most notable perhaps was the sheer volume of people inside (numbers AND noise), all socially distanced of course.  Upstairs, which I wasn't allowed to see, the occasional flash of a neon light, a boom boom boom, I think this area was reserved to those with a 'special' HG5 postcode.  "Monday night, November, pissing it down, freezing cold, and we're nearly full .... this isn't normal!" shrieks a barmaid careering past me.  She's right there, but nothing normal about this particular Monday night.  Did make me reflect how many people would've been in here, had I come on the corresponding evening in 2019.  As if to underline this point, a couple called Mr & Mrs 'S' (she had my trainers on) arrive, they've even booked a table.  I'm under the stairs like a house elf, or that is how it feels.  A man beyond eyes me nervously, then takes his pint to the disabled loo, presumably in case I date rape him.  Alright mate, you aren't at a beer festival now!   My clothing seems to have come apart, vest is low cut, got an owl emblem on, I look like a shit(ter) Russell Brand.  Not a bad 'pub experience' but the tick was the main thing.  As last orders is sounded, I pay my extortionate bill and head back out into the gloom. 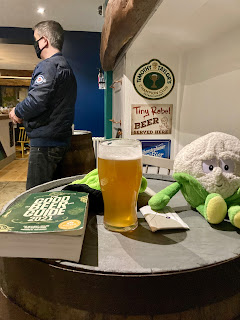 And there we have it.  No problems getting back to York.  Still felt a tricky evening, and I've have to spread my wings further if I was achieve something similar on Tuesday.
I'll be back on Thursday this week to tell you about that.
Cheers, Si