BRAPA is ..... STATION'D IN DURHAM, SUBPOENAED IN CONSETT, SEQUESTERED IN NEWFIELD

The regulars at Consett's wonderful Grey Horse had given my next pub tick, the local Wetherspoons, such a slating, it ended up working in it's favour as far as I was concerned.  My expectations were so low, it was never going to hit those depths.  Result, BRAPA pleasantly surprised by a bang average pub experience!


Company Row, Consett (1704 / 2921) then.  "It is the only purpose built Wetherspoons in the UK outside of an airport", I'd been told in the Grey Horse.  I raised a skeptical eyebrow and floated the notion on beer Twitter, who I knew'd be quick to jump on any pubby untruths, and sure enough, I was informed by pub lovers like Leon Foster and Steve Halstead that Stapleford, Ilfracombe, Melton Mowbray and Mere Green all have them, so take that Grey Horseians!  The whole "actually feels like an airport lounge or being on the moon" didn't feel too accurate either, you'll go to plenty less atmospheric 'Spoons than this and it had a William Jameson Sunderland feel to me.  The airport comment was fitting anyway as kids growing up in the 90's all thought there was an airport in Consett thanks to Phileas Fogg crisp adverts https://www.youtube.com/watch?v=zmKXC9CYZwU   Getting served in a 'Spoons is never easy, in fact I've lost 37 hours of my life in this way #BRAPAFacts  and it was heavy weather here.  The Tyne Bank ale though was absolute nectar of the highest quality, you won't spend a better £1.39 all year.  Ironically, the raised area with 'Family Area' danger sign was the pub haven, free from the twild life and party tweens careering around the main arena.  Only a couple of ladies, debating whether black & white spots or zebra stripes were better, disturbed the calm.  Perhaps not the most exciting pub tick of the year, but hard to criticise. 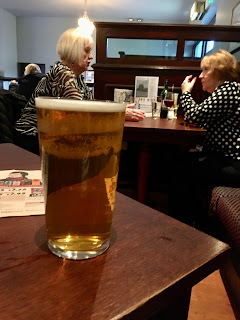 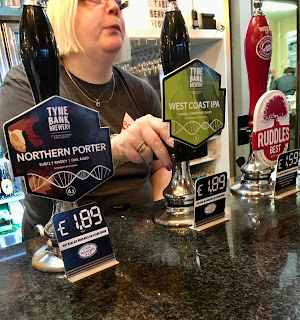 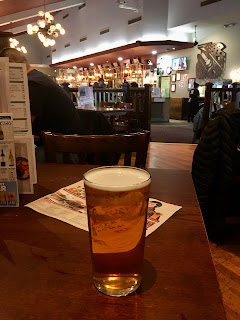 Two schools of thought (in my mind at least) as to what to do with regards my final two pubs of the day.  One was to get a bus to Newfield, just outside Chester-le-Street and do this pub, along with my reamining tick near Durham station.  OR get back to Durham and get out on a bus route to West Rainton (for Leamside) and Houghton-le-Spring.

Bus timings made up my mind, with a Newfield bus timed perfectly for my Company Row pint.

However, the first signs that my sobriety had flown the nest were when I asked the bus driver for a ticket to Durham, which he wasn't going to!  I stepped away confused, remembered I was off to Newfield, and got back on, casually making out I'd come up with Newfield as a back up plan.  Then I fell asleep and he had to shout 'WE'RE IN NEWFIELD' so I managed to make myself look a total tit in front of the whole bus.  Well done Si.

Never mind though, I'll never see any of them again and attentions turned to a special 'monkey off my back' tick.  It was a case of second time lucky for me here. 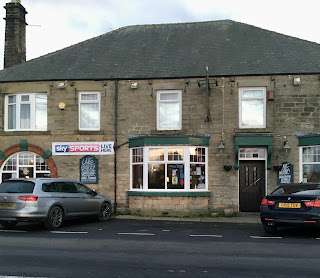 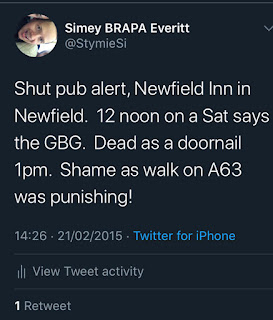 Yes, back on 21st Feb 2015, I'd try to come here for my 586th BRAPA pub tick only to find it closed, despite the signs clearly saying 12 noon on a Saturday.  I looked through windows, tried doors, asked a few locals in grey cardigans who couldn't explain it, it was the first unexpected closure (but sadly not the last) in my pub ticking career.  Further confusion in that the 2015 GBG had plotted it incorrectly outside Bishop Auckland, which is the WRONG Newfield, AND it said there was no bus service, so bit of a fail all round.  Every year, I've been annoyed to see it a GBG regular, so it was fitting I really enjoyed Newfield Inn, Newfield (1705 / 2912) today, five years late or not!  It was a comfortable sweeping style pub, huge swathes of bench seating and floor space, a bit like an estate pub but more nicely furnished.  A local community clung to the bar for dear life, and I ordered a Double Maxim in a deep voice because it felt like the right thing to do!  A young drunk lad seemed concerned by my huge overnight rucksack, and told me he hoped I wasn't planning on doing too much more walking this evening, which was weird but touching all at the same time. 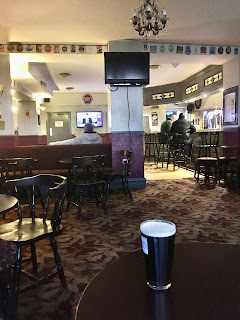 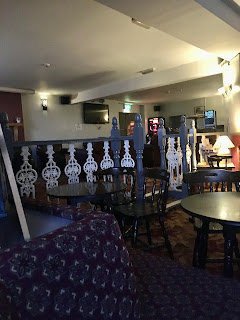 As often happens after a health giving pint of Maxim, I was feeling a bit more sober once the bus dropped me off in Durham for my final tick of a successful weekend.  Having said that, there was no question in my mind that this next picture was in focus ...... 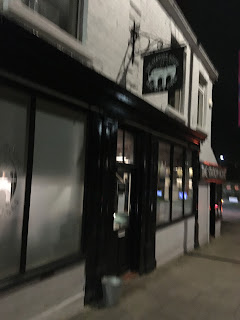 Once inside the Station House, Durham (1706 / 2913) I was presented with a small little window to the bar a bit like my tuck shop at school, and my ale was so crystal clear and headless, I had to smell it cos I thought I'd picked up someone's cider by mistake!  In fact, I stayed for two pints here and the ales seemed to be all Yorkshire, they were great in any case and a more sober me might be able to remember what I'd ordered.  I soon discovered the pub had a bit more depth (both physically and metaphorically!) than your average micro, customers winked and gurned in equal measures, and I ended up in a cosy area down a couple of steps where an excitable group of middle agers smiled kindly, and said "cooo", "wowwwee" and "niiiiiice" a lot and planned their summer holidays.  They were subbed off for two silent chess playing students and I started depressing myself by reading about this dead footballer.  All the while, I had a vague feeling of significance about this place, and before much longer, a nice dark bearded man with a gentle air of authority arrived at my shoulder.  Of course!  This was Chris M's gaff, and he's even commented on my blog before which makes him 99.7% superior to the population.  We had a really nice chat about lots of things I'm too drunk to remember.  I do remember the walk to the loos being 'excitingly treacherous' and him telling me the colour scheme is 'Mallard' which is green not blue if you think about it.  Says a lot about my mental state that it wasn't til the Sunday that I remembered Mallard was a train as well as a duck.  Then he took me to the bar for the photo at the top of the blog, and all in all, a great experience in a weekend of really strong pubs.  And what is even better, Co Durham has a low GBG turnover so am hoping all this will be valuable when we get to September's cross ticking. 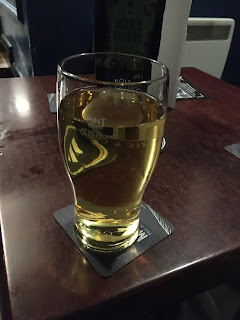 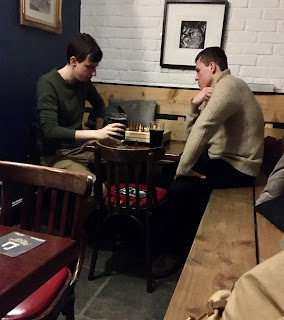 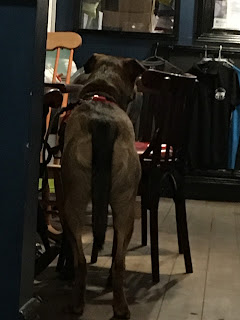 The train home was bizarre as two drunken Oxford Utd fans kept asking people if they had a pack of playing cards, and said they gauged people's reactions to this question to work out their personalities!  Can't remember my response but they spoke to me for well over 20 mins before moving on to another victim. I went for a pint in the York Tap which I really didn't need ....

Then, time for a KFC bucket, a bit of MOTD and then I slept in til 2pm!  Top weekend.