BRAPA - The Heavy Woollen Cats of Walthamstow (Part 1 of 2) 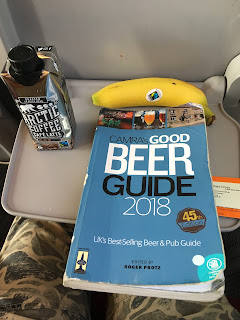 It was that joyful biannual bananary time of year when I take a group of work friends on a BRAPA expedition.

We're becoming more adventurous as time goes on, the first few outings being in the shadow of Dewsbury.  We then spread the net slightly to Greenfield & Mossley, before more recently going to Newcastle, and then Liverpool back in Feb, which was no more Heavy Woollen than a shellsuit.  And we were really stretching the concept now with a trip to E17 - Walthamstow.

I met the assembled gang in the Parcel Yard at Kings Cross, a station pub I seem to both admire and dread in equal measures, and they were all finishing off their brekkies.  I'd arrived at bit later from York, they'd all travelled down from L**ds, and I'd been further delayed as I'd had some 'business to attend to' in a nearby cubicle.

Let me introduce the gang.  We had Jason 'Mr Angry' Garrett, maintaining his 100% Heavy Woollen record.  We had Piper Corday, who has only missed two trips.  We had Simon 'Sy' Clark, his second appearance after the Greenfield day.  And we had debuts for Piper's Dad, Mick, a proper no nonsense Morley bloke, and his jovial partner, Shirl, a real livewire of a character.  A good solid group of folk.

They told me they'd spotted an ale for sale in here costing £230.10.  I know this pub can be expensive but I thought they were joking til they showed me the menu!  Insanity, Fullers must think people are born yesterday.  I got bottles in my cupboard older than that, and I can't give 'em away! 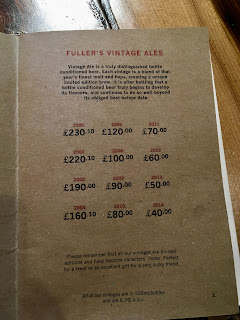 As we got up to begin our Tube journey on the Victoria line to sunny Walthamstow, we had the perfect example of why I tend to travel alone.  Piper wanted to go into the Harry Potter shop, Mick & Shirl hadn't got their underground travelcards, and Jason needed a cigarette between leaving Kings Cross and getting down into the Underground!  'Patience is a virtue' I told myself, as a cool crisp pint in a cool old pub flickered before mine aley eyes......

"Baby if you've got to go awayI don't thinkI can take the painWon't you stay another day?"

When poet and all round great bloke Brian Harvey penned the above lyrics for East 17's unlikely Christmas Hit 'Stay Another Day', it is worth noting he was remarking on Walthamstow Good Beer Guide Entries potentially being de-guided for the forthcoming 1995 edition, and imploring the local CAMRA branch to keep the entries unchanged so his cross-ticking didn't become too problematic (he was on tour a lot, so opportunities to return home to E17 were few and far between).

The record books will tell you two remained, and one was de-guided, but not replaced, so a moral victory for Mr Harvey at least.

The three in 2018's edition were very different, and our first, a supposed 10am opener looked as shut as any open pub can actually be, with no lights anywhere, even when we got inside, I thought it about 75% likely that our overly serious barkeep was going to tell us they 'weren't ready yet' or some guff.

But to his immense credit, he pulled through 4 pints of some Guava & Rum Russian World Cup beer, which was somehow not as disgusting as it sounded.  When Shirl asked how it tasted and I said 'mmm, getting hints of guava and rum!' I actually think they all thought I was serious, including the barman, so I had to backtrack and trot out my now tedious "I'm more of a pub than beer man".  The pub was vast, chilly and pretty basic, which might in theory sound like the type of pub I favour, but in reality, there was something rather drab and unloved about it.  And I can't believe an influx of custom would hugely change that either.  It seemed to be living in a local past based around theatre productions and live music events, but a horizontal papier mache Moomin was about as exciting as the decor got, and when I excitedly photographed a nice looking pillar next to me, Sy told me it was just used to house a fruit machine!  A smell of bleach hung in the air, nice the pub had been cleaned, but it took over the beer a bit which is a common problem of 11am drinking, and whilst it was hard to dislike the pub, it won't be one I'm recounting on my deathbed in the year 2043, and this is often the problem with London pubs, they seem more likely to be forgettable than most, in my experience so far.


'Don't worry everyone, the next pub is only 0.2 miles!' I cheerily declared as we left, thinking I should be holding a yellow umbrella as I felt very much the tour guide.  "352 yards, right I'm holding you to that!" says Mick, just to ramp up the pressure.  Who'd have thought he was former army?

352 yards and one scary road crossing and lady with amazing yellow and black dress later, we were there.  Even huger pub this one ....... 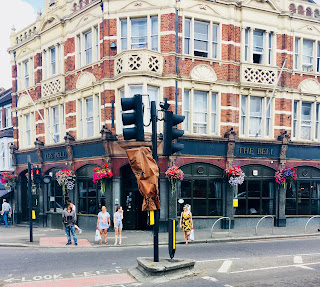 Despite being another imposing Walthamstow boozer, this was a very different animal to the Rose & Crown.  It was more 'modern day London' in many ways, the hanging baskets the first giveaway, then comfy sofas, young boho people, quirky decor and as Shirl noted, William Morris style wallpaper to give the Moorbrook in Preston a run for its money.  Fish wallpaper in the gents cubicle was headache inducing, and I'm glad I didn't need to linger.  A demonic Metallica pinball machine was less out of place than the Creature from the Black Lagoon in Beerwolf Books, Falmouth, and the place seemed to have a happier more 'loved' feel than our previous pub.  Me and Sy braved an ale with an amusing pumpclip called 'Slap in the Face'. It came in a dimpled jug, and was a metaphorical slap in the face at least, tasting as it did, of piss, though I think this was more the ale itself than any poor cellar management issues.  Mick, Jason and Sy started talking about chlorinated chicken, the EU, Northern Ireland, and other non-BRAPA friendly topics when all I wanted to do was see if distant dogs had funny expressions on their faces or if strange men were eating scotch eggs in a cockney way!  But then, a murmur passed across the whole pub and everyone peered out of the window as police sirens took over.  Traffic slowly filtered passed the window, in what the pub concluded was a presidential motorcade for Mr Trump.  But why come through the centre of Walthamstow?  A Brian Harvey fan for sure. 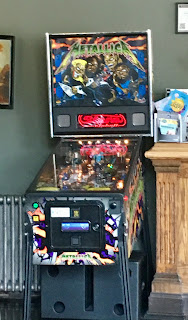 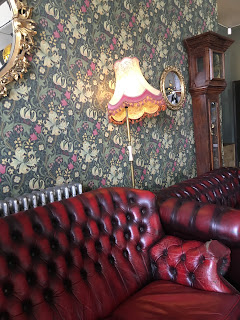 Pub three would prove to be a pre-emptive , and I'll review that one and the others in part 2, so I bet you are absolutely dying for it now like a next episode of Neighbours after a spectacular cliffhanger!  See ya tomorrow.