As so many BRAPA characters of our past have done in recent years, Oliver Cromwell looked down upon me in a judgey manner as I sat in the centre of St Ives (the underrated Cambridgeshire take on Cornwall's fave) and munched on a morning pasty on a mild but overcast morning.  'If I were a cricketer, it'd be perfect for a bit of swing bowling' I remember thinking, which probably shows the amount of toxins still floating around my addled brain. 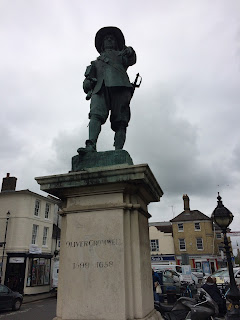 The Lord Protector obviously didn't approve of the pub excesses I was indulging in during my fortnight holiday, and he had a point.  I tried (and failed) to take a 'selfie' with him, another thing he probably disliked greatly, for he once famously demanded he was painted 'warts n all', so what he'd made of instagram filters is anyones guess.

And my first pub was named after him.  It took me just off the main town square down a little side street, and I was all set of one of those beautiful outdoor pub photos as it looked like an old fashioned gem, when a van pulled up and parked right outside so I had take these less good versions. 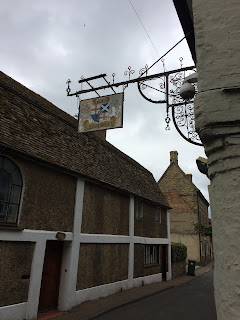 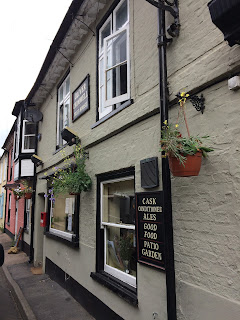 I scowled at the photobomber, who offered no apology, simply wrestling a tray of eggs out of the back of his van and scrambling (sorry) into the pub before me, even ensuring he had a pint while he was at it, meaning I even had to wait to be served even at 11am!  Yes, I wasn't a fan of egg-man.  Happily, the pub had a nice feel to it and a cracking pint of Humpty Dumpty Mild (I'm not making this up!) felt like the fitting medicine I needed to start the day.  I couldn't have picked a worse place to sit, right by the blackboards which a motivated baldie was artistically editing with the latest food and drink offerings.  I'd never seen people do the blackboards before, I thought pub elves made them in the middle of the night.  But just as he was admiring his handy work, a woman bolted out of the kitchen with a pained look on her face.  "The Pesto is off!"  Noooooooooo, he'd put it on the board already.  I thought he was going to smash the blackboard in two and stove her head in with it.  But instead, he smiled and said "oh well, no one will probably order it anyway!"  Anti-climax.  Mrs Cromwell was just as friendly if not more so.  "Is it still raining out there?"  she asked me.  "WAS IT EVER?" I replied, which came out a bit more brusquely than I was expecting, and it threw her a bit.  The staff then animatedly discuss the quandries of employing a 'rock chick' barmaid.  "I don't mind her tattoos because she's got a bubbly personality, so as long as she doesn't have chains hanging out of her face, I'm happy to keep her!"  Legendary.  An old bloke, immediately identifiable as a 'Ronald' walked in.  "Mornin' Ronaldo", said out blackboard baldie.  A pet name, obviously.  But then Mrs Cromwell asks the old guy "Are you REALLY called Ronaldo?"  I despair.  It was time to leave, nice pub to start us off. 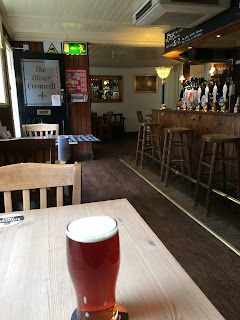 It was over the bridge out of St Ives, which really did seem a nice town.  All these people banging on about the Cornish equivalent, but give this place a bit of love. 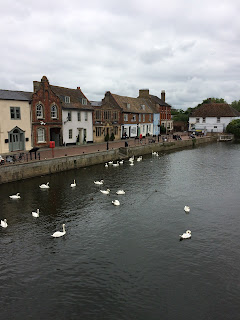 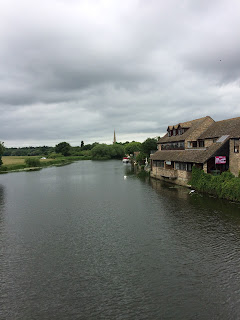 Though one thing that annoys me about Cambs (along with the Fens and the Mad Privileged Cyclists) is their lack of imagination in naming places.  St Ives is just one example.  They've nicked Colne off Lancs which is most upsetting, they've nicked Haddenham off Bucks, and changed one letter in Huntingdon to confuse it with an outer York village.  GET YOUR OWN NAMES CAMBS!

Hemingford Grey is great in that it is a Cambs village you can walk to without feeling you are coughing up a lung by the time you reach it, though I have to say I was utterly sick of walking anywhere by this stage.  Self-driving cars can't come soon enough!

I had serious misgivings about this pub from the description in the GBG and a visit to the website 'CambsCuisine' , but history tells me, both of these things make a pub sound worse than it is. 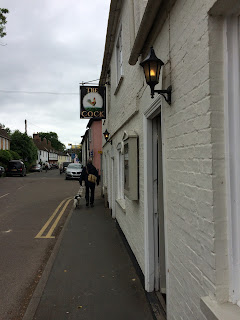 I needn't have worried, for the dining area and pub area were properly separated into two distinct areas, so much so, that I would have thought they were two totally different buildings if I hadn't known.  Having said that, the decor in the bar was little bit chilly and safe, and my only drinking companions were a large group of six down below me, who seemed to be stuck in some kind of Hemingford Grey Purgatory, not quite drinkers, not quite diners which might've explained their pained expressions and forced conversation whenever I walked past them.  The barman seemed a bit stodgy, but later, when he saw my 'BRAPA card' I'd left, he was properly interested and we had a really nice chat, so you can't always tell.  And I've just realised he's probably going to read I thought he was stodgy now.  Oh, and look, I've said it twice now!  The Brewsters Hophead was up there with the best quality pints I had in my Cambs holiday.  So imagine my shock when a waitress escaped from the restaurant side and started trying to change the barrel.  "What you doing?" asked our decidedly non-stodgy hero.  "I think it needs changing!"  "No it doesn't, it's just a difficult handpump and you have to pull it in a certain way".  "Oh".  Phew, panic over, I don't like to see good beer wasted.  Ok, so the pub had a funny smell as well (a bit like someone farted badly in 1765 and it still hadn't quite evaporated) and the Wifi insulted me which I probably deserved, but the winning factor  was the loos.  Piped Blackadder audio and amazing Ordnance Survey maps.  I had half a mind to bring my pint in here and sit on the bog for half an hour.  All in all, an unexpectedly good place to drink. 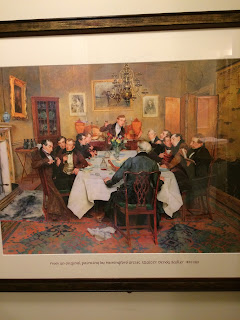 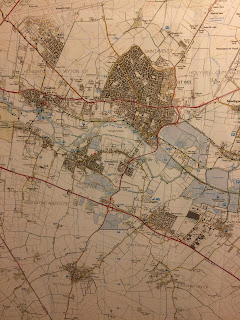 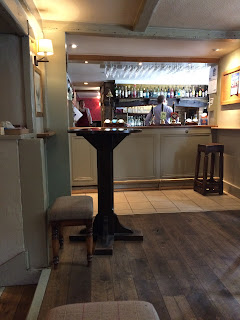 After the walk back to St Ives, I had two pubs to aim at but my phone was doing its usual rubbish 'freezing' thing, so I ended up finding the one I wasn't looking for.  Shall we go in?  I think we should. 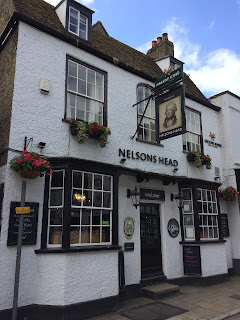 Never one to be upstaged by Cromwell when it comes it historical pub legends, Nelson somehow managed to get himself a St Ives pub named after him, though when I saw those 4 upsetting words in the English language 'Greene King Local Hero' I admit any enthusiasm I had was waning.  Yet to my amazement, this ended up being probably the most positive GKLH experience I'd ever had!  It had a real 'oddball' feel to it, staff and punters all very peculiar in a way you couldn't describe, either smiling in totally over the top manner, peering around corners at me, or making odd comments in frog like voices.  Me marching around the pub stomping on the wooden floorboards to the loo, nearly colliding with kitchen staff, going back outside to take the above photo (after the event), was hardly making me blend into the background, and a really gorgeous old couple wanted to know what my game was with the outdoor photo, so I had to explain my phone woes to them.  This led to a conversation about "the Kodak days" being better, and wife wagged a thumb towards her hubbie and remembered the disposable little cameras he had which he'd then get developed at Boots.  Ahhhh, imagine if BRAPA had to do that, I'd have to write all my blogs about a year later!  Anyway, on a roll, I for some weird reason jumped into a raised seat behind a screen with no room to move my legs, and shouted across the pub that I wanted a photo of them, which they agreed to!  Oh my gosh, I'd gone the full Richard Coldwell.  Forget being Cromwellian, I was now Coldwellian.  And if you don't get the reference, you need to get to L**ds pubs more.  A man then 'jokingly' offered me a sandwich then whisked it away, I didn't get this St Ives humour.  My pint 'Egyptian Cream' was on special offer for £2.70 probably on account of its thick dark richness not selling in this hot weather, but it was great and if Hull City played at the AMEX next season (they aren't cos they're shite) , it'd be a great 'away team' themed ale.  And if this doesn't make sense to you either, don't worry.  Something 'special' about this pub, glad I accidentally behaved weirdly too to fit in. 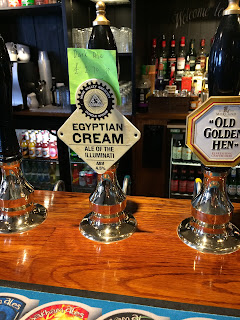 My final pub of the 'daytime' session was just around the corner ..... 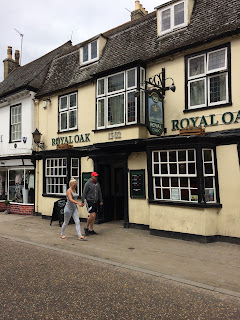 We all know pubs called 'Royal Oak' or more likely to be edgy, scary or downright terrifying than any other (and THAT, is a BRAPA fact), and you certainly got a sense of this here, but safe to say it was a third very good St Ives pub out of three.  Take my Oakham Inferno - just so good, crystal clear, possibly best pint I had in my entire two week holiday so take that Cornwall and Cambridge!  And that is a LOT of beer.  But more importantly, a lady called 'Sylv' was chatting to our ginger host, and she had that 'smokes 50 a day' laugh and accent that made her sound like she'd stepped out of the Ten Bells in Whitechapel 1888 after a few artisan gins with Jack the Ripper & Roger Protz.    Her teeth were the colour of the spine of the 1999 Good Beer Guide.  She was brilliant.   Yet I went to hide in the side room, which seemed to be a 'home cinema' which seemed totally at odds with the front bar.  I was soon joined by a 90 year old bloke, with a wheeze that Ruby the cat and the landlord at the Bucket of Blood would both be jealous of.  His liver spots went to the bar independently for their own pints.  The barman kept saying things like "I tell it like it is!" and seemed to be threatening a mid afternoon lock-in from what I could gather, which would've been quite cool, but even I'd not want to be locked in a building with this gang.  Still, quite an excellent pub in many ways.

It was time to get myself back to Cambridge for an afternoon of rest and relaxation before the evening push, as I still had quite a number of pubs in Cambridge itself to do.  Join me tomorrow for tales of that one.