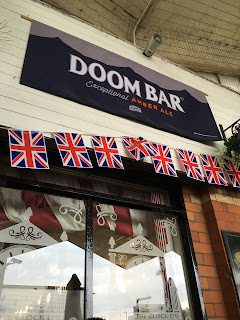 It was Saturday afternoon, and our gang of six were approximately halfway through a great day in sunny Cleethorpes.  I was in my element, all seemed well with the world, but there was a division, an internal split forming within the camp!

Of course, everyone's favourite bearded revolutionary Tom Irvin (imagine Che Guevara in a 'Monkey World' fleece) was behind it.  He wanted to take me to a pub called the Spiders Web.  It was listed under his hometown of Grimsby, but was only just over the border from Cleethorpes.  Knowing  July hasn't been a productive pub-ticking month, I was determined to get my full quota of six pub ticks in today, and 27 minutes walk didn't look terrible, so I agreed.  The others thought we were mad, and headed for Wetherspoons / Fish & Chips and told us they'd meet us later on.

I'm a quick walker but Tom set a challenging pace, sweat beads dripping from his head as he burnt calorie after calorie from his brittle frame, and looked to prove that Google Maps had overestimated the walking time.

I was interested to know when exactly we'd cross the 'Grimsby border', and as we turned the corner of Carr Lane, Tom said "somewhere about here" as we crossed a road.  Right on cue, a dog started barking madly from 'beyond' and a rare breeze blew across us.  It was quite spooky really, almost as spooky looking as the pub itself, which I hoped had a 365 day a year Hallowe'en theme. 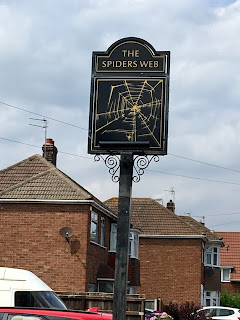 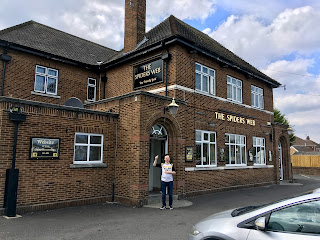 There aren't enough classic estate pubs in the GBG, standing alone as it did on a main road serving a community with no expectations beyond drinking and having a good time.  Pubs can be very simple things when you distil them down, which makes me wonder why so many tie themselves in knots with their brewhouses, kitchens and what-not knots.  Having said that, I know plenty of people who would not enjoy this pub, but happily, me and Tom weren't two of them.  We wandered in with a pool table as the centrepiece, a game of doubles between two father & son combos, one all crew cuts, competitiveness and danger, and one, more gentle and studious in their play - we got quite into their game!  The staff felt like proper custodians who 'owned' the space, known and loved by those around them, and the ales were unapologetic in their national brewery offerings.   Tim Taylor Landlord, John Smiths, Proper Job (third time I'd seen this today already!) and Wainwright which was obviously the 'continental' fruity choice as it had no pumpclip.  We sat in the far corner and noticed the pub pet, a parrot or budgie of some description, had escaped from the cage though there was no sign of it circling the room.  There might be a BRAPA prize for best absent pub pet at year end, so watch this space.  Was sad for Tom really, who has been hoping to train a pub parrot to say "Brian Laws is a wanker" for 4 years now.  Nowhere would it be more fitting.  The news came through from the others that Wetherspoons was rubbish, whilst my Tim Taylor Landlord was good quality, which helped me feel better about the long stride back to Cleethorpes that faced us. 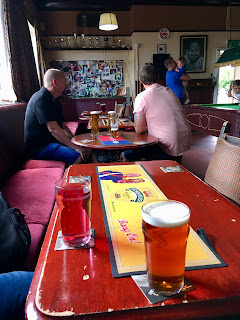 The pace on the walk back towards Cleethorpes station did drop dramatically, our aim to get to pub number five before the others seemed a real certainty for they were now having fish n chips on the lovely old prom like some New Tricks reboot: 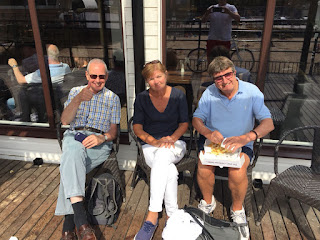 Cleethorpes station has not just one, but two pubs.  Or at least one pub and one refreshment rooms.  Now it has been said before that if you see a shopmobility scooter outside a pub that it is a good sign.  So imagine how much better it must be if the shopmobility scooter contains a person sat stock still, drinking a pint of real ale. 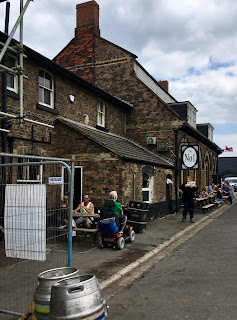 And I wasn't to be disappointed.  PUB OF THE DAY.  And I say that knowing how marvellous the Notts was.  Before we even got inside, Tom's now legendary 'Allam Out' card was quizzed by the couple on the bench next to our Shopmobility friend, who seemed to be a mute.  When I explained about it being about the current owners killing Hull City football club, all they could say was "you won't get much sympathy around Grimsby ho ho ho" so I just thought bah humbug losers and went inside.  I've been to some joyous station pubs over the last 4 years, and longer, this being like a vast version of the Mallard in Worksop for sheer true pub joy, managing to avoid that transient feel that stop places like York and Sheffield Tap from ever entering the realms of 'best of the best' for all their other plus points.  I managed to miss the Bass yet again, but this is what happens when local bar blockers don't let you see all 8 pumps.  I like to look out for funny charity boxes because I know it's something Martin Taylor looks for, but that meant explaining to one of the grizzliest locals that 'I'm a big fan of this fisherman guy' as I took the picture (see below).  I thought he'd think I was a right weirdo but instead, he turned the charity box face on and said "look, he's looking at you now so you've got an even better picture!"  It's little seemingly insignificant moments like this that can sometimes make a very good pub excellent.  The others had now arrived to share the joy but no time to linger, as a SEVEN pub plan was now vaguely forming in our minds.

Over the other side of the station, we came to the other GBG entry.  I think it should be mandatory that all towns and cities have at least two GBG entries on the station.

I don't know what it is with Cleethorpes and Cornwall ales, but after a day of seeing Proper Job nearly everywhere, now you are presented with signs for Doom Bar and Atlantic here, and it was Atlantic for me in this much more expected Station Tap, nice & all, friendly faces greeting you on arrival but a bit 'busy, and if I'm honest, a bit of a come down after the joys of No 1, a bit of a surprise to me for as you regular readers will know, I normally find a Number 2 eminently more satisfying than a Number 1.  Dad was now in sensible mode,  the J20 was flowing with that modern evil keg hue which Twamra keep telling us we should embrace.  Personally, I'm more likely to embrace Embrace, and they were fucking atrocious.  Did they do a World Cup song?  Anyway, we sat outside on these rickety little seats because too crowded within, and after another foray into Hull City quiz land, the gang announced that a 7th pub 'was on' if I drank up and got on the next train.  Wow, at one point, I didn't think I'd get 6 in, so this was a timely boost in a quiet July.  Dad went on ahead, to get back to York for a reasonable hour, but would he regret not making it to Grimsby districts current pub of the year?

So, here we were, Habrough, just a few short stops on the line from Cleethorpes where the locals seemed to be armed against a BRAPA invasion: 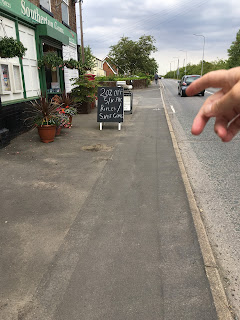 Back in 2014, the debut year of BRAPA, I had to change trains in Habrough.  I had an hourly plus wait, and yet despite this pub being very prominent just across the railway line, I didn't go in.  It looked awful.  Tom chastised me for not viewing it as a pre-emptive, and never let me live it down.  And then it went and got in the GBG!  And how it had won a Pub of the Year award!  Proof if I needed it you should treat EVERY pub as a pre-emptive.  They'd certainly made it look a lot more presentable in the intervening 4 years, perhaps a little bit too much for my liking, and a steady selection of 3 ales were on ... "sourced regionally .... often Caledonian" as the GBG entry says!  Before I could say 'hoots mon, there's a mariner shaped moose loose aboot this hoose', we were sat down, I think Christine did a 'try before you buy', can't remember what we had (memories hazy by now but Bateman's judging by the glass) but it soon became dreadful and turned to vinegar even before the half way point.  Ugh!  I tried to find a positive in the slightly namby-pamby surroundings, and was trying to praise the internal exposed brickwork, when the others told me it was actually wallpaper!  Doesn't take much to fool me after 8 pints.  The others said goodbye, leaving me & Tom, as I struggled with my pint, and chuntered about having been right all along about this place, when I heard a strangulated breathy sound.  I looked up, and Tom was properly out for the count!  What do they put in that blackcurrant?  Actually don't ask in here.  A limp end to what had been an otherwise wonderful day. 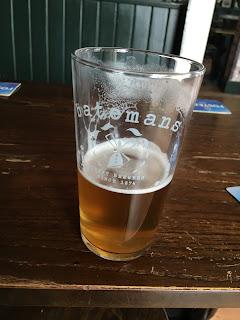 I had to change at Doncaster, of course, and briefly considered popping back into the wonderful Draughtsman where the day had begun all those hours ago, but decided to be good and got a coffee and a twix like a #pubman who knows his limits.  Yes, I do want a medal.

Back at home 9pm, I opened my own micropub but it had limited opening hours so I got zero customers.  Good!  (You see, I have the micropub owner ethos already).

It closed down on Wednesday.

Join me WRochdale Write-Ups on Sunday.