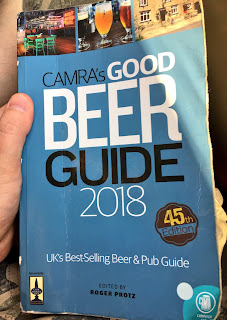 I'm not sure what I was thinking back in April when I'd booked these train tickets to get me into Peterborough as late as 11:36am.

I'll tell you one thing I definitely wasn't thinking, and that was 'England might have a World Cup Quarter Final, 3pm kick off'.  But I was now.  Reality can be real.  I won't say anything more profound all blog so you may as well stop reading now.

The upshot of this poor planning was that I'd missed the bus to Castor by one minute, and would have to wait a whole hour for the next one.  And today of all days, I couldn't afford to wait.  I HAD to be in Whittlesey for 3pm.  So a taxi it had to be.

Before this though, I'd already experienced further woes of travelling later than usual.  Two York twilds were waving at passers by from an upstairs window before I'd even got two minutes out of BRAPA Towers.  "Yoo-hoo" they shrieked.  Camp twilds, always the worst!

And on the train, a silly man behind me had got on the wrong train, and when the nice train guard lady said she'd only charge him the excess rather than a full fare ticket (not like Bedfordshire 6th April 2014 20:00 hrs, NEVER FORGET, very much my Hillsborough), he STILL kicked off for the next half an hour like a big baby, being really unpleasant to her.  His penance, a sympathetic trainspotter came to sit with him for the rest of the journey and talked at him about privatisation and other trainsplainery fave topics - sets and shunters, ballast and grice.  Karma.  Unless you're Tom.

Then the woman in front booked an online holiday on loudspeaker with a Skype travel agent.  She's staying 500 yards from the beach.  I won't tell you exactly where, but I could.

My taxi driver was a jolly bloke, bit scared I sat in the front but I like to be able to hear them, make sure they aren't swindling me, and show them the GBG at a glance.

Castor looked a lovely place, all the buildings were grey and thatched like you looking at some black and white photo, but with a very hot sun in it.  Pub one was imminent ...... 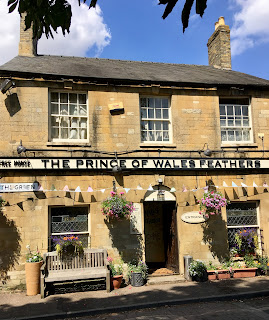 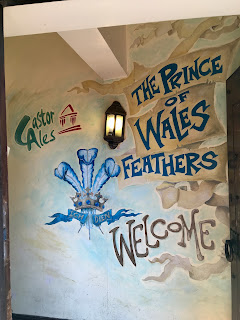 In a recurring theme of 2018 pub ticking (Delph being a key example), I'd barely stepped over the threshold when I was greeted by a gorgeous pub dog Charlie (nothing twoggy about him) who was then shouted to 'get away' from me by a lady who realised I wasn't one of her local fanboys.  She would redeem herself later though.   Charlie didn't really do much more of interest, so apologies to 'Cats' from San Jose for not writing the detailed dog review I promised her.  He simply existed in the pub space in a languid manner, a bit like Socrates playing for Brazil in the 1982 World Cup.  At the bar, I took my change out of my pocket and proceeded to order it so I could pay in the exact change.  The barman clocked me, so I gave him a big smile, but he then confounded me by shouting to a bloke sat on the left of the bar, reading a paper, minding his own business.  "Jim ..... JIM ..... JIMMMMMM .... WHAT YOU DRINKING?"  "Eh?" replied Jim, appearing from behind his broadsheet with a dazed look on his face, even looking between me and barman in a 'why've you not served someone who is actively seeking a drink?' kinda way.  Village pub life at its finest!    So more waiting, but not to be denied, I still joined in their weird England game preview.  "Shame Vardy is injured" says Jim, possibly the only person in the UK to utter this today.  Landlord started slagging off Jordan Henderson.  A wry smile passed over my face, though I chose not to agree, for I'd had quite an animated chat with my friend John Watson about him two days before, telling him I was trying to learn to love him after years of thinking he's a weak link.  "I might close mid afternoon so I can watch the game in peace" said the landlord, which was so par for the course in GBG ticking land, it surprised me less than Jim, who simply looked aghast.  "You .... you... wouldn't!" he burbled.  I managed to get in a Hull City/Harry Maguire mention, to make my mark!  Danny Rose played for Peterborough, the landlord told me, so he's the locals fave.  Talking of the Posh, someone asked why the pub was so quiet today.  "Peterborough are away to Bedford in a pre-season friendly" he replied.  "Or it might be the village fete."  Another old local mate of Jim's came in.  "Who will England play in the semi final if they win?  I just can't find ANY information about it ANYWHERE!" he whined, proving Castor really was cut off from civilisation.  I'd even ordered a World Cup beer from Castor themselves, the kind that modern beery types think gives CAMRA a bad name with its comedy logo and shit name.  I LOVE seeing beers like this, from a time before beer folk took themselves deadly serious.   Was a bit warm though!  But flavoursome.  In a refreshing change of topic, the Saddleworth Moors fire suddenly became a very hot topic (excuse the pun).  "If it spreads to Manchester, it'll be an improvement!" screams dog lady from the other room.  Redemption complete, it was time to trot to the next pub.  Amusing place.


It really was boiling hot outside as I walked down the street, passing the scorched village fete, proving it really might be taking custom away from the pub. I snuck inside for a quick piccie, though a man who looked like an archery teacher scowled at me but didn't fire at me, which was nice. 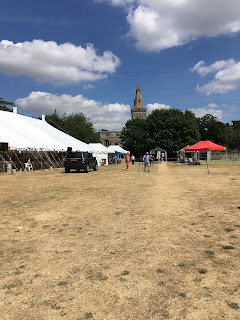 The next pub was soon on the horizon, and it looked even more beautiful than the first, but could it do the business inside as well? 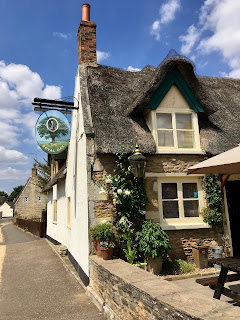 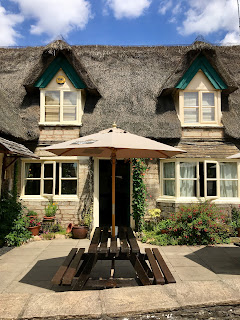 You are all aware by now of the 'threat' that all pubs called the Royal Oak carry, and here it seemed to be a rather impatient landlord, for when I ordered an Oakham Inferno (really good quality, much cooler than my previous one, Simey Beer Score - B) his eyes never left the screen opposite.  I'd been vaguely aware Formula One was on, fair enough, perhaps he's fan, it takes all sorts.  But when I turned to see why he'd made zero eye contact, he was simply watching an advert for 'Bake Off : The Professionals'.  Talk about how to make you customers feel devalued!  Mary Berry really does like haunting my BRAPA experiences.  A really nice old couple came in, and like me, looked around at the low beams, amazing cool backroom with a farmhouse feel, great corridor to almost outdoor loos, this pub had a special atmosphere.  They asked if the football was going to be on.  YES.  And are they doing food?  "No, we aren't doing food at all!" said Mr Impatient proudly.  They looked crestfallen.  Never before have I been on the side of the food wanting folk!  And what a shame about the loud piped music, interspersed with whizzing F1 cars.  I honestly think this pub could've been a year-end contender if had just got a few simple little things correct, but still very good.  Time had ticked on, I really had to down my ale, for my bus was almost due, just as a twild with a broken arm wandered in and started whining, and a barmaid who actually smiled had appeared.  Shame. 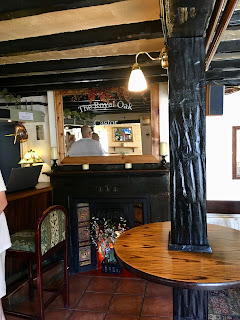 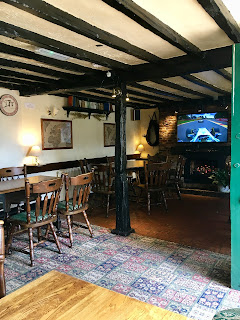 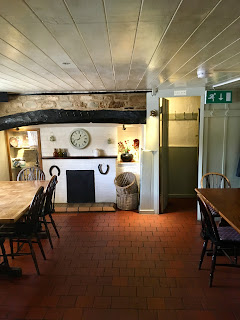 My bus was a bit late, but I could still just about make my connecting bus to Whittlesey.  More on that next time, but for now, it is goodnight from me, and goodnight from him!