I was feeling a bit ill / being a hypochondriac when I arrived in 'beautiful' Rochdale on a balmy but reassuringly grey Tuesday evening, for about my 20th trip to the town.

I had a limp from a recently twisted left knee, and could feel a bit of the dreaded 'man-flu' taking a hold.  But on the bright side, hobbling away from the railway station hacking my guts up with snot dripping from my nose can only lead to respectful nods in a town like Rochdale.  'It's okay, he's one of us' thought the locals.

Even if I'd been singing a Lisa Stansfield / Gracie Fields medley with a Co-op carrier bag swinging from my arm, I couldn't have felt more accepted as one of them.

Confusion reigned as I knew I needed to get a bus from the 'Interchange', which in most places means a bus station / railway station hybrid, or at least some stops just outside.  But not Rochdale.  I discovered an extra 9 minute walk was required which I'd not been expecting.

Pub one was a good 2 and a bit miles north of the centre, and the bus driver was one of those crazy chatty blokes, who told me with some regret that he'd have to sell me a day ticket even though I was only doing one journey.  "You might be a mystery shopper for all I know!" he commented quite randomly.  Jeez, had I been spending too much time with sometime BRAPA devotee, Tom Irvin, the worlds most transparent mystery shopper?

Anyway, I'd been looking forward to this pub for a long time, it always just evaded me on Hull City football days of old, but being in the GBG for 36 of the last 40 years had to bode well, didn't it? 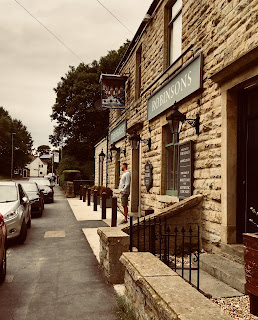 It might well have been the high sense of anticipation, but this pub just fell a bit flat for me.  Early signs were good, a bunch of old blokes with big bellies, tank tops and medallions carved into the walls which they presumably never move from, smiling reassuringly as I walked to the bar in the way Lancastrians do better than anyone.  The bar was small, and just three ales were on - and about as North West Robinsonsy as it comes, Trooper, Unicorn and Dizzy Blonde.  Unicorn it was, cos a bloke before me got it.  The young barman was far too softly spoken to work in a pub, couldn't hear a word he said and could only make out the 'fifty' when he told me how much my ale cost.  I guessed £2.50 was most likely here, perhaps optimistic, was actually £3.50 so he had to come back to me for the extra quid.  There was nowhere to sit in the bar area and the voice of twildery emanated from a bright conservatory infested with Mummys and Buggys.  So I compromised and sat in the corner, opposite two Mums and Tweenage Girls eating Chocolate Cake with ice cream and cappuccinos.  It may have contained a hidden ingredient too judging by the insane laughter and jukebox singalong.  Jeez, this was a bit different from my typical classic Rochdale pub experiences of old in places like Baum, Brittania, Albion and Cemetery.  This was vaguely 'gastro', well for Rochdale anyway, it still had things like Beef Rag Pudding on the menu which you presumably can't find in South Kensington.   And I was quite rushed for time, having to spend exactly 25 minutes here before rushing outside to flag down the bus going back the other way. 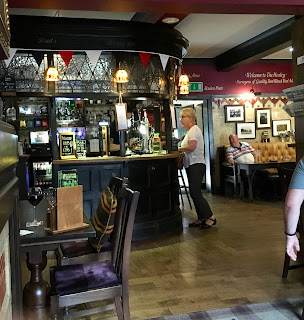 Right on cue, our same legendary bus driver sped around the corner and picked me up, with a look of either guilt or regret in his eyes, I couldn't quite work it.

The 'interchange' was right by pub number two, so at least saved my poor knee any more trauma. 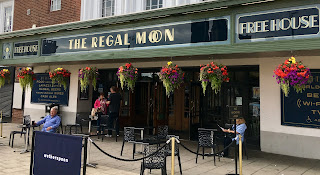 By contrast to the Healey, I never 'highly anticipate' a trip to a new Wetherspoons, because you generally know what you are going to get, and that is possibly why I'm often surprised with how much I enjoy the experience.  And before we get into the weird detail (and there's plenty of it), I want to let you know this is a fine example of when the chain gets it spot on.  Low roofed, spacious, comfortable, cracking hubbub, toilets not requiring a 5 mile hike to reach, friendly.  It is no surprise the best 'Spoons I go to are in towns like Rochdale, Maltby, Runcorn and the like.  But like I say, weird stuff happened.  It often does when I'm in pubs.  I blame pubs, not myself, and this allows me to sleep at night!  At the bar, I spy a JW Lees stout for only £1.49, and with a 'Mudgie' voucher, I was aware this was gonna be my cheapest pint of the year!  "I'll only be able to give you it for £1 cos we can't go below that" says Katie and her amazing eyebrows.  "Shame, I've always wanted a 99p pint!" I replied, but secretly impressed she knows the 'Spoons Vouchers terms & conditions.  I sat at a posing table, which I've started CHOOSING to do in Wetherspoons, for it affords better views for pub observation though I'm against the things really as they leave me dangling.  I notice my beer is distinctly sulphur.  And I'm just debating whether to take it back, I know I should, when I spot the pumpclip has been removed already.  Bingo!  So no need for explanation, you'd think, but the gormless bloke who serves me still pulls himself a bit and tries it, the fool, grimacing as he realises it has gone.  All the other ales cost £1.99 I can see so go for a Hawkshead Pale (fantastic by the way) but then Mr Gormless is all like "oooh oooh, Katie, this one costs more, how are we gonna do this?" and I'm thinking 'no way I'm paying the difference' but she snaps "Just give him it!" and Mr Gormless is like "yes mistress" (not an exact quote, but obvious she's the boss).  While all this was going on, she was removing some Stroke Association Charity Box collectors, and good, for charity collecting in pubs is a massive pet hate of mine.   Then, all is calm for the next 15 minutes with just a gentle hubbub and nothing happening til a man in the raised area leaps up and shouts "I DON'T CARE ABOUT THIS WHOLE FUCKING SITUATION!"  Like fade-out on your fave 70's hit, the pub turned as one to see what the commotion was, apart from one young group in a booth behind me who were absolutely wetting themselves.  All I could see was an 80 year old woman reapplying her lipstick, and within seconds, the hubbub was back to normal.  I loved this place.

Well, that was a pick-me-up I needed, and with the Metro station just outside, I had just enough time for a cheeky third pub before the long trip back to York.

Four stops later, I was at Milnrow.  I'd accidentally got a single instead of a return, and forgot about this on the way back.  What is it with me and Metro/Tram accidental fare evading?  I just can't help myself.

The pub was a bit of a walk down a couple of streets, shame for my poor knee which I'm trying not to mention, but soon enough, it came into view ..... 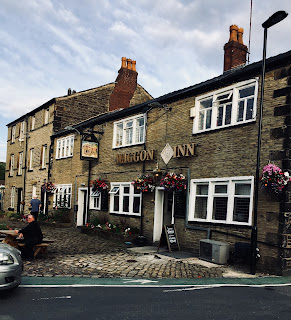 Milnrow was a bit like Rochdale but with a joviality 'add-on', though my initial impressions here were not hugely favourable as I saw Marstons advertising everywhere and a room of old duffers, wall-to-wall with their faces in the nosebag with the smell of pie and stewed veg.  The main bar area had a much better feel, and what with the Wainwright conditioning in the cellar, it was Jennings Cumberland or Banksies bitter.  Well blow me down, I hadn't seen Banksies since about 2005, used to be a regular in my early real ale days, though my excitement at seeing it wasn't matched by West Midlands woodland folk on Twitter who came back with a load of their language like 'yow', 'bab' and 'bostin'' which made little sense, but made me feel I'd made a poor choice.  A bloke was acting rather OTT to my right, he'd met an old friend he'd not seen for years, and the amount of back slapping and bear hugging that went on was irritating, and probably left the other quieter bloke bruised from head to toe.  And then wandered around the pub asking blokes for their wives phone numbers, and then spoke of St Margarets, Hounslow and Isleworth like most people would about a Greek island holiday.  He had another friend with hair that belonged in 1975.  Milnrow, I was deciding, was a true bastion of old and I was loving it after the slow start.  The barmaid had been a bit over communicative, if that was possible, at the point of service. "I'll top it up soon, but not yet, I'll give it a minute, might need another minute etc etc."  (JUST GET ON WITH IT!)  There was a little side room called 'Terraza'.  It looked shit.  It was totally empty.  People in Milnrow don't want rooms called Terraza, they want rooms called 'Tobacco & Mushy Pea Room', 'the Brexit Lounge' and the 'Whippet Hovel'.   A lesbian couple came to sit at the bar directly in my eyeline.  One was smiley, but the other hopelessly self conscious, and kept glaring at me every time they held hands (jeez, I wasn't even taking my photos!)  I felt like saying "Look, I've ticked the pubs in Brighton AND Hebden Bridge AND Kentish Town so get over yerself!"  Then, there was a slight murmur of discontent from Mr 1975 Hair, the Backslapper and co. as they discovered this week's karaoke had been cancelled because the owners were going on holiday.  "Awwwww" they whined.  Full of life this place, in many ways the perfect example of a PUB. 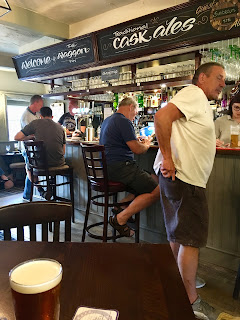 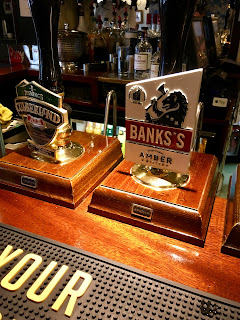