About a year ago, I had my bathroom refitted and without an actual pot to piss in, I did what any sane pub ticker would do and checked into a Warrington Travelodge and visited most of the pubs in the area.

Now, I'm having my kitchen done and it is an equally chaotic scene at BRAPA towers:

So what to do other than stay out after work all week and get my drink, food, warmth and comfort in the name of BRAPA?  Not that I need an excuse, but after a very dry spell ever since Liverpool, it's about time I got back on the horse, as we say in the trade.

Tonight the problem was finding a 'midweeker' that actually opened on a Monday, nearly everything I had left in North Yorkshire that was achievable didn't, so it was over t'hills to dark Manchester with the weather and my ankle (which I don't like to talk about) both on the mend.

A broken down train at Batley threatened to derail my progress (haha) but then the announcer man said "you know the train in front of us I said had broken down?  Well now it's not broken down and we'll be going to Huddersfield the normal way!"  Hurrah.

After a quick sandwich, drink and change at Piccadilly, I found myself shinning south of the city, Airport bound, where I came to Gatley, just before 6pm, which is always great progress.

And just down the road (not quite as near as the GBG App pushpin claimed) was a big black & white fronted pub.  It's astroturf garden exterior screamed "HYDES" at me, in the way Rose of Lancaster in Chadderton did last year (even though that's JW Lees!), but some nice lamps and a mosaic pub name threshold had me feeling optimistic: 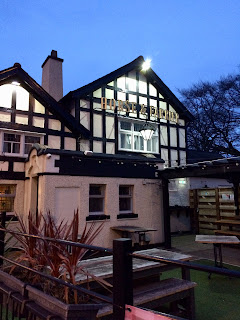 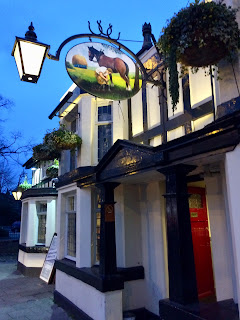 I'd always thought Hydes pubs were quite expensive from my limited experience, so £2.55 for a good quality pint of 1863 made me wonder if this was some kind of Monday early doors happy hour style arrangement.  I was served by a big square bloke probably called Fran, both he and Mrs Fran had that no nonsense 'effortlessly good at what we do' air about them that you like to see in your pub staff.  As a twild started gurgling to the left of the pub and a small blonde woman smiled in a curious way, I was drawn to the right hand side which was more dining, so I just sat the otherside of the 'divide', the 'last line of drinker' if you will. It allowed me to gurn at the diners, all of whom were eyes deep in mash potato, or talking about it - from the family with teenage daughters, moody mash man on his own, or the wide boys at the back of the room who yawned and seemed to have dressed in Hydes decor and colour scheme, which manages to combine some dazzling headachey patterns like tartan and chessboard, yet still managing to 'bland it out' with some pretty insipid colouring.  Hard not to think of Ember Inns in this regard, but perhaps an Ember Inn that's been given a good talking to by Liam Gallagher.   Not much else to say, one of the teenage girls walked into the chair opposite so I made sure she felt foolish (just for the narrative I hope you understand) and my extreme orange sweatshirt and scarf combo got the weird looks it deserved.  I stayed for another half of a guest dark ale called 'Prague' (£1.70 a half!), funny cos apparently Fran loves talking to people about ales from Prague.  But Mrs served me this.  I said bye, returned my glasses, but the pub didn't respond.

And as I walked the 5 mins back to the station, that would have been that for any normal pub ticker.

But there's nothing normal about BRAPA.

As I glanced up to see my train back to Manchester Pic cancelled, an oldish couple clocked my pained expression and the bloke says "do you want a lift to East Didsbury tram station?"

Seemed random, but was willing to go along with it, even though they told me they were from Saddleworth, they weren't living together, and he wasn't parked nearby, probably with a few Nazi manuals in the boot, she with bleached peroxide (or was it grey?) hair, and we ended up walking about 15 mins to his house where he drove a posh car out from round the side of the house!

The woman sang along happily and loudly to his mix CD (Sloop John B, Smoke Gets in Your Eyes etc.) as I cowered in the back wondering what would become of me.  He dropped us at the station but then insisted on parking up to make sure we got on the right Metro tram thing!  (East Didsbury is the end of the line so not sure how even I could fuck this up?)

Soon became clear as they told me to "go ahead and get on the tram" and as I turned back, they were having a passionate snog, tongues and everything, ugh, and eventually she joined me and we got chatting on 'Saddlesworth BRAPA'.  She taught me Saddleworth wasn't really a place, but lots of little places together I'd been to like Greenfield, Dobcross and Uppermill where I have BRAP'd.

She even told me there was a bus to Delph which was a revelation re a difficult pub I need, so she gave me her bus timetables, very kind, and we said bye at Chorlton-scum-Vardy cos I was desperate for the loo, so popped into the Chorlton Tap (formerly 'Bar') and used it the purpose I think it's most fit for.

Eventually back in Manc, train delays to York so coffee, twix, my phone died and back home for 10pm to kitchen chaos.  Phew!

I'll be back tomorrow for another random after-work pub tick in either Greater Manchester or North Yorkshire, so stay tuned for that.  I'm here all week!