I'd been making a bit of a meal out of getting to the end of my Buckinghamshire pub ticking challenge, but on Saturday 10th March at 12:10, it was finally over!

Relief the overriding emotion, it hasn't been a thrilling county to complete, a bit like Bedfordshire with less Greene King.  Of course, I will remember the pubs I really enjoyed.  The Stratton Arms in Turweston for example, the Black Boy at Oving, the George & Dragon at Quainton, the Wheel at Naphill.  I could go on,  but there were still more Olde Swan's at Woughton on the Green, Eight Bells in Long Crendon and Pointers in Brill for my liking.

And this final pub sadly fell into the latter category.  It was like everything I disliked about Bucks pubs had come together to 'see me off' for one final time.  I was behind schedule too, having booked today's tickets thinking I was going to Cambridge, so hopped in a taxi to make up some ground from Marlow just north of town to Burroughs Hill, past the Rebellion brewery.  I'd have been killed trying to walk it.

My taxi driver told me he liked this pub, so when we arrived, I lied and said it looked 'lovely' (all the while thinking what Matthew Lawrenson would say about the pub font) in the hope he let me off the fare - he didn't: 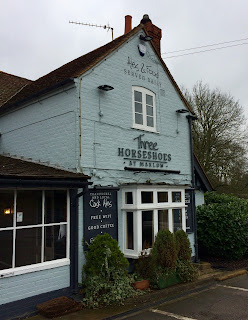 Once inside, I had to wait to be served as two women with a huge buggy asked after their reserved table in the name of 'Lizzie'.  "Oh, a table for six?"  "No, a table for two".  Confused looks followed.  Was the buggy so big, it was really the equivalent of four people?  Probably.  The beer range was healthy and very Rebellion as you might expect, and very good quality, thus (somehow) justifying it's inclusion in the Good Beer Guide(!)  The lad who served me seemed shocked when I said "no I'm not paying by card, I'm paying by cash".  He looked at me with contempt, and as I used a tenner, he delightedly gave me a fist full of change with no apology.  Those coins have probably been in that till untouched for the last decade.  Orkney's favourite adopted son Sir Quinno tells me they'll be a 'card only' pub in the GBG next year, what is the world coming to?  I turned to sit near the door so I could make a quick getaway.  In the room next to me, fake bookcase wallpaper.  In front of me, random piles of logs serving no purpose.  Ember Inn style patterned cushions blocked every seat.  There was a plaque beyond with the inscription "Reg's Corner", probably a tribute to some old local regular character who's now carked it.  Sure he'd be horrified to learn his corner is no longer a corner, just a seat in the dining area.  A twild called Rhys came in with his grandparents.  He spied the dog bowl next to me, and decided he wanted it to be his new paddling pool.  He was told to behave.  A couple sat opposite me and almost smiled, the lady with good skin told her bald Greg Wallace style companion about her Mum's nervous condition, causing her to freak out over some lambs lettuce earlier that morning.  I had a bus to catch.  Bucks complete.

After a jolly little bus ride, a change at evil Maidenhead (which I could talk about at greater length but won't), I arrived at a stop called "Hayes & Harlington" which I'd been vaguely thinking about for a while because there's a required pub in each place.

Harlington looked furthest away, and a good 25 minute walk crossing the intimidating M4 followed, but thankfully the pub was at the 'north end' of the town saving my legs further punishment (my ankle which I don't like to talk about is almost 100% again now I'm glad to report).

The pub was standing there, larger than life being all Grade II listed and Fullersy with some quality evening entertainment coming Harlington's way: 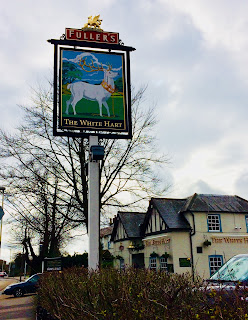 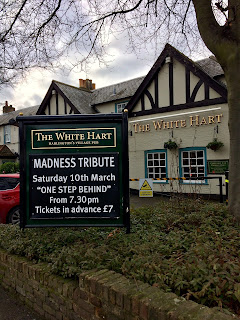 "One step behind" could also go to the staff, as I had the longest wait in a BRAPA pub this year, and yes that does include any Wetherspoons.  But that's unfair of me.  I did myself no favours, standing behind a particularly chunky wooden pillar.  The barmaid, the only member of staff on a busy bar, was doing her level best, but didn't have x-ray vision, and even if she did, this pillar would surely still get the better of her.  When a twild wailed from beyond out to the left of the pub, I thought nothing of it but a miserable old git at the bar told the barmaid to 'get something done about THAT' which she promptly did, the child wasn't heard again!  Would love to know what she did, but she returned to the bar to be told "good girl" by the MOG which am sure was a great boost to her confidence(!)  By now, I had that pleading "please please pour me a pint, anything, Pride'll do it!" look in my eyes, I ended up with some guest thing, and walked over to the right hand side where everyone was European and had big bags - perhaps waiting for a flight from nearby Heathrow?  I quite liked this pub, it straddled 'foodie and proper local' as well as anywhere probably could in West London, and I was impressed.  As two smiley men from Spain and Poland called Jerry Vasquez-Grabowski (I made that up) admired each others footwear, I necked my beer as I had an even longer walk back to Hayes and the clock was already ticking, and I needed to!

Another landmark had been achieved in all the chaos, my 2018th pub that had ever been in the Good Beer Guide, one for every year since Jesus carked it. Cheers JC!  Back to Hayes then, which I'll tell you about with the other pubs I visited, tomorrow at the slightly earlier time of 6pmish.