As the tram trundled slowly towards Eccles last Tuesday night, I tried to assess how much I knew about this place which I'd never been to before.

Firstly, it is full of heritage pubs, four I think.  How wonderful, but the GBG being the bastard it is was only letting me visit one tonight.  Thanks GBG, you are horrid.

And secondly, they have these little sweet treats called Eccles Cakes.  They are quite nice pastry things, with a sugary crispy outer, but then they spoil them by packing them full of raisins.  And to make matters worse, they then pretend to outsiders that the raisins are dead flies.  Yes, this was the level of humour I'd be up against tonight, and I was terrified.

The pub was visible from the tram stop, but still not as close as the Wetherspoons directly opposite.  In fact, nearly everyone else went in there, I was the only person to walk to the right.  The Ecclesians stared after me like "ooooh, get 'im thinkin' he's too good for 'Spoons".  But I am, obvs. 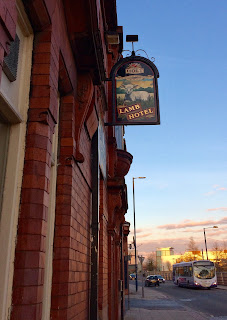 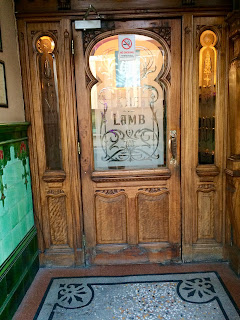 You could tell by the mosaic floored frosty glass entrance that had all those heritage hallmarks right from the off.  It had a corridor with side rooms coming off at each angle (tick!) and I entered the front bar where a welcoming deafish lady served me Holts Mild - the only beer I could see available, and at £2.35, this was good enough for me.  All heritage pubs should be Holts, I don't know why, but it just makes sense.  The taste of that mild just went so well with the interior, and this was without me making it to the brilliant billiards room that my heritage book was banging on about.  Instead, I wandered into a cosy quite big lounge off to the left of the corridor.  As I walked in, a red faced bloke called Dennis was saying "He had it in his feet when he was fucking his nanny"  Well, that goes down as one of weirdest quotes to enter a pub room to.  I sat nervously opposite the three old dudes, the man in black (Geoff, not Johnny Cash) smiled at me apologetically like 'you don't know what you've walked into, lad'.  The third man, the oldest, called Tom, was playing devil's advocate in this 'footballers as intelligent human beings : please discuss' open forum, but when Wayne Rooney was described a few minutes later as a 'good looking lad', all credibility left the room, and the three blokes followed one by one, Dennis actually the only one to say bye to me.   I basked in the quiet heritage warmth for a few minutes longer before leaving myself.

And that could have been that for my night, but good pub experiences give me new hope for more, and I had the taste of ale between the teeth now, so instead, I walked straight past Eccles railway station, turned left, and headed towards Monton (never heard of it!) in search of a second pub.

I couldn't see it, so stopped to draw out some cash outside the Co-op and get my bearings (I'd not been planning on buying more than one drink tonight!) and noticed dogs were everywhere (as Pulp once probably sang) which was fitting because the next pub had 'dog' in the name..... 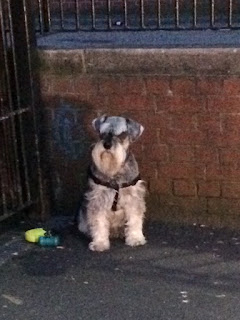 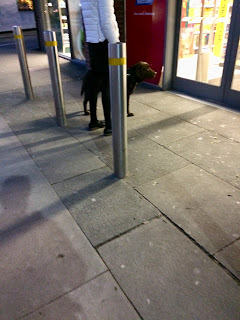 Just at the moment I was photographing these above little fellows, a total twunt barged me out of the way so he had more room at the cashpoint.  I knew he was a twunt cos he was wearing a blazer with skinny jeans and shiny shoes, and he had a beard.  Then he got in a Mercedes.  This wasn't a good intro to life in Monton.

I finally saw the pub in the chilly nighttime gloom, it was a Micro and it had no discernible pub sign frontage, bloody typical micropubs, always have to be a little 'off-beat' in everything they do..... 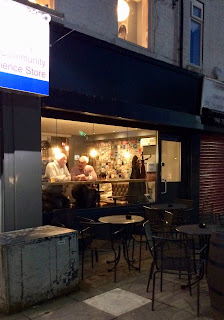 After the two blokes in the window glared at me in an incident reminiscent of my trip to the Mounting Stone in Bramhall, I was inside and after a dithery dear faffed with her purse, I could finally be served by the jolly young lady with accent which could've been Canadian or something equally upsetting.  Marshmallow Stout sounded exciting, there were only two ales on surprising for a micro, but it quickly spurted to a stop, and I was left with a choice of one, which I couldn't read cos it was in the dark corner.  But she still tried to serve me from the line of tall fonts.  All the while, I was conscious of a young man behind me jigging around, tutting and sighing, no patience at all.  I turned to smile sympathetically, but he glared back.  He had a beard and a blazer, but not skinny jeans so not the same bloke unless he'd changed in his Mercedes.  It was far too busy downstairs, with raucous blousy middle agers guffawing who all knew each other.  I'd spied a totally empty upstairs room, and whilst I'd normally like to be 'where the action is' for BRAPA purposes, I was happier out of it on this occasion.  And when a pink marshmallow of a lady (not related to the off beer) went to the loo, she told me I looked 'very comfy on my own up here' so I joked dead-pan it was my own private bar (I said bar, but it had no bar).  She seemed to believe me anyway.  Other ladies smiled too, so is it just Monton men who are rude?  Well, perhaps not because at one point, a nice man actually stopped to let me go up the stairs joking I didn't need to rush as he had nowhere to go.  Downside, he reminded me of Paul Hollywood on acid, but it was nice at least to break that bearded run of horror!  And that sums up this cute but odd little micropub,with it's peculiar band pictures.

The nearest station now was no longer Eccles, but Patricroft, and you know what was right by the station?  Yes, a required GBG pub which doesn't usually open til after 7pm.  And it had just gone 7pm, and my next train was delayed giving me JUST enough time to drink a pint.  FATE! 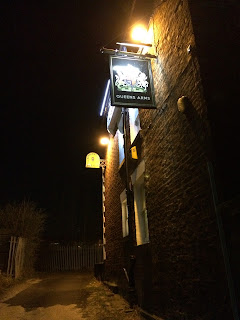 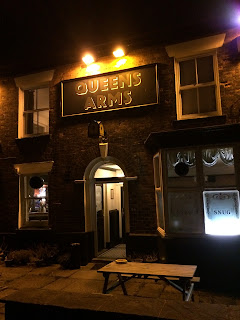 With rooms called things like 'snug' and the very north western 'Vault' coming off a corridor entrance, this was like a smaller more basic understated Lamb in Eccles.  'Heritage' in my eyes, even if not officially, this had even more of the 'untouched for centuries' feel about it.  In fact, it was renamed when Queen Victoria visited, and I bet it's not changed a lot since then, and I wouldn't be surprised if she too found Thwaites Original as the only ale on.  I wandered into the vault, realised I was the only customer, the landlady looked friendly so I made some comment about the air turning chillier, and as happens in quality pubs, that led to a relaxed 10 minute chat about the weather!  I did what I hate, and asked if Thwaites Original was the only ale on, she said "I hope that's alright" and I said "absolutely great" as an attempt at recovery.  My mood turned a bit sour when my delayed train had got 'back on time' (which never happens when you are stood on a cold platform waiting for one!) so I then wittered to her my quandry about whether to drink quick or stay here for like the next two hours!  She then swapped with presumably her hubbie, the landlord, so I repeated my babbled train quandry.  He was a typical stoic northerner, friendly but few words, certainly not here for my wittering bullshittery.  I finally said to him "If I stopped babbling on and just drank, I might actually get this earlier train!" and you know what, he almost smiled.  Lovely.  He warned me if I was to stay, the Thwaites original was nearly at the end of the barrel.  He spied three young lads walking past the window "I think they'll be drinking it too" he warned me.  How can you tell what they'll be drinking? I asked him, but too late they were in already.  They had a real air of 'young Twamra' about them, and he was right, 3 pints of Thwaites it was.  He nodded over at me as if to say "told ya, Son!"  #Pubman.  I downed my pint, said goodbye, raced for my train, got it somehow!  Phew.  Wonderful place.

I got myself across Manc on foot from Victoria to Picadilly, and was back in York at a decent hour, something that had looked impossible for most of the evening,  I enjoyed all three pubs tonight, especially the first and the third and with 21 pubs done in 21 days of March, the 31 dream is still alive.  Onto the weekend now, as I look to finish Rutland.