BRAPA - Porridge in Dorridge (and other snowy tales)

It was pub ticking in the West Midlands for the first time since 2nd Jan 2017, and I tell you now, I have missed it.  I honestly don't think outside of the North of England (especially Lancs area), I've been to an area with such top quality pubs, honest folk and proper hearty ales reminiscent of a good mug of Bovril.

I'd put Tom in charge of the day's pub strategy, which always feels a bit like riding a bike with no brakes into a patch of nettles.

But soon, me, him, Daddy BRAPA and Ben Andrew (making his first appearance since Norwich last year) were walking through the biting (and I mean BITING) winds of 'Beast from the East II' through Dorridge to our 11am opener, situated just beyond the sign for Dorridge.  It was open, and still had the 'Merry Christmas' sign outside which is incredibly quirky or lazy.

I was happy enough just to see it open at 11am, what a relief!  Anything else was going to be a bonus.    But in customary West Midlands fashion, it was beautifully basic and homely.  A keen old school barman with an air of the Bob Fleming about him (minus the cough) served us three immaculate pints of  HPA (and a blackcurrant for the Tommy) and we sat round the corner and admired the railway memorabilia, whilst Tom tried to claim the pub were charging at least £190 (or something) for ice cream due to a phantom decimal point.  All I could do was get my porridge out, because why else, it rhymes with Dorridge!  After all, I took Oral B to Thoralby.  I tried to take a Pumice Stone to Penistone (well, that one could've been worse!) and I'm planning on taking a wreath to Keith.  Ben's role at this stage seemed to be to stop us drinking too slow so we could maximise our pre-match potential, and it was all very pleasant as we said goodbye to this friendly unassuming little classic.


Because the GBG is annoying, the other Dorridge pub was not only a club, but right over the other side of town, so much so that we actually passed the OTHER sign for Dorridge.  And to make matters worse, there was actually ANOTHER cricket club right near the Railway Inn, but of course this one wasn't the one in the GBG!

All this meant neither Dorridge pub was strictly within the confines of Dorridge.  And neither of Sollihull's duo are either.  One, a micropub in Olton, the other an Ember Inn at Widney Manor.  Confused?  You bloody should be.

Me and Tom strode ahead and got there first, Tom temporarily slowing to chant 'One Peter Taylor' at a local funeral directors, because he's a lunatic.

"The problem with these clubs is finding the entrance" said Tom very wisely as we found a cricket pitch but wondered how to get in.  Tom wasn't forceful enough with the door, so the landlady signalled through the window to try a bit harder, which he did.  And we were in. 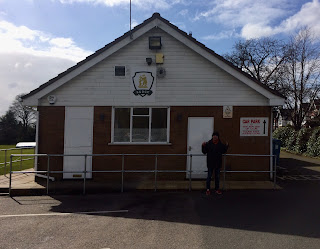 The two old geezers at the bar (one of whom had a pair of colourful trousers very similar to a pair I might own) looked thoroughly unimpressed with our kamikaze entrance and attempted jokes with the couple behind the bar, and by the time Ben and Dad finally crashed their way through the same door  a couple of minutes later with a snort and blow of the cheeks, the geezers expressions were now set to "why the bloody hell did we allow our club to make it's debut in the Good Beer Guide and allow Twamra scum in?"  But sod 'em both because even without the need to wave my CAMRA card in the face of the staff, we felt immediately at home.  The beer range of two was fun.  One was a 4.0% golden ale from Salopian, and the other was errrm a 4.0% golden ale from Salopian, which was only amusing when Dad asked me to order him the weaker percentage.   It was a cosy set up, looking out onto a windswept icy cricket pitch, and the place started to fill up with local geriatrics who, because we were the first faces they saw on entry, looked ready to keel over in shock.  This place wasn't used to foreign faces.  Ben told us we should try and drink v.quickly to get the next train.  We agreed, so time was of the essence.  Dad suggested porridge was becoming fashionable.  If this was true, said Tom, "I'm chucking my oats out of the window".  It was Quote of the Day, and this quote may have happened in the Railway Inn, but look, it doesn't bloody matter so shut up.


We made our train easily, and Tom expertly decided we should miss out the more "unknown quantity Ember Inn" and head straight for Acocks Green, a pub of the year contender, where Ben suggested we settle for a pre-match session.  Okay, so he walked us a slightly longer route than was necessary but otherwise, it was the best decision we made all day ......

If the two Dorridge pubs had been excellent finds, then this ramped the stakes up to '11' on the 1-10 scale of 'How Brummie a pub can be'.  It was large, dimly lit, the bar blockers smelt of centuries unwashed man, a low carpeted area swept left to live music stage and bogs, the right to large screen TV, locals and a modern geeky bottle shop beyond it.  The ale range was overwhelming, but in a good way, and I was soon drinking a pint of this deliberately cloudy orange soup with a hilarious name.  Perfection.  Well, almost.  A distinct lack of seating (despite the large area) said a lot about the popularity of the pub, but also a love of rugby (the sport, not the place - they probably view it as too near Coventry) and the only free seat was under the big screen with the deafening noise of it proving a bit too much.  So after a brief consultation, we moved into the more modern (and slightly 'cooler') bottle shop area with pacman, space invaders and one pseudy looking bloke on his laptop who smiled up at us and started hammering away on his keyboard like he'd used us for inspiration.  It was an excellent pre-match session after that, Ben did his traditional Hull City "on this day" quiz, which I probably won despite Tom's tactics (buzz in first and shout as much bollocks as comes into your head).  Great pub, if it wasn't for BRAPA, I'd definitely look to return one day. 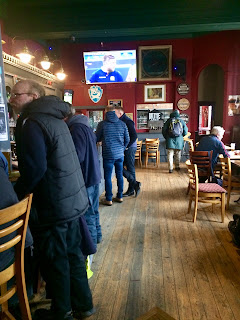 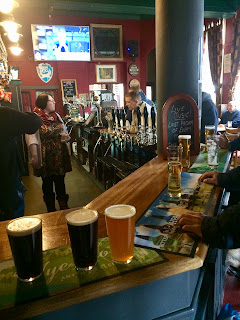 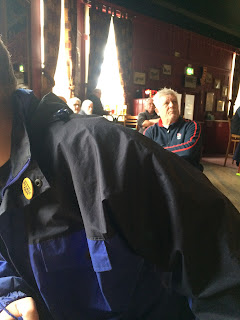 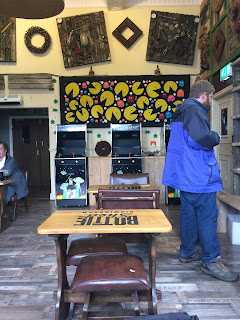 Now, we took the train to Bordesley where we could walk to the ground.

Now I'm not saying Birmingham City fans are a bit slow in the head, because the ones reading this are very intelligent (no, I'm not just saying that, honest, you are great) but the ones I encounter on matchdays over the years sometimes leave a bit to be desired.  Today, as ALWAYS, I kept being asked if I was a Wolves fan.  Yes, I know my scarf and shirt combo wasn't strictly black n amber but come on guys, I'm on a train at 2:30pm heading to somewhere near St Andrews!  Are they so obsessed by their high flying rivals that they aren't even aware who their opponents are?

Anyway, we finally had a nice chat and when I charitably said I thought Gary Monk was a decent appointment for them, the twild of the group replied by saying "we're gonna stuff your lot today!"  What a little angel.  He was right of course.  His Dad called him a "cheeky chappy".

And by the time we got to Bordesley, the blizzard was coming down sideways.

My fave part of the match was the 5 mins where I couldn't see the players or the ball, as Hull City did we they always do when I go to watch them away, and didn't turn up. 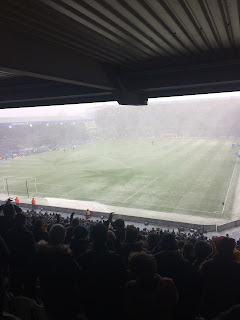 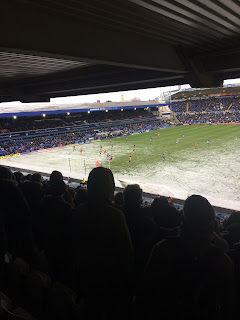 On the plus side, Dad had smuggled some whisky miniatures in to get us through the second half of boredom.   And even better, our train back stopped at the aptly named Snow Hill, allowing us to do the 'city centre' pub I didn't think would be possible.

Like a lot of great Birmingham pubs, it seemed to stand alone on an slippy industrial side road. 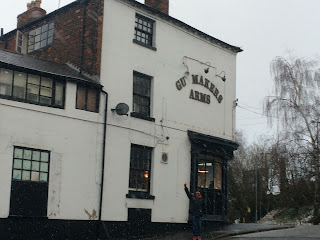 Now this might be the pub where they got me on Twitter once and offered me a free pint when I came to tick it off, but that might have been before the owners went to take on the Woolpack in York (If I'm thinking of the same place).  In any case, I'm not gonna go announcing myself under any circs so instead, I ran my hands under a hot tap to get some feeling back in them, and pushed past some rowdy cockneys at the bar where we were served by a friendly young lady with the kind of good honest fringe you can trust.  Turned out the cockneys were on a stag do, because they kept telling everyone, but no one cared.  I'll never know why cockneys think they are more interesting than any other section of society.  This pub had another excellent feel, how often do you get FOUR quality pubs in one football day, I'd say this was virtually unheard of in BRAPA history?!  It seemed nicely understated, warm, and a top ale from somewhere probably local called Two Towers which was amazing quality again. 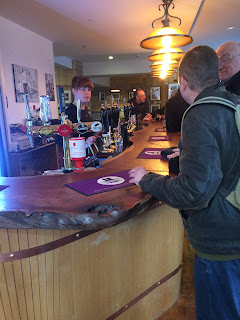 After a coffee and pasty, me and Dad trained it back to York agreeing it'd been a great day out regardless of the football.  Of course, had we done an NFFD, we'd have surely won 3-0.  But such is life in the world of pub ticking.

I can't do my Friday night pub ticking, but I'll be back in that Manchester area on Tuesday night, which actually I'll probably have done when you read this.  It never ends.  18 pubs in 18 days as of Sun 18th March.  The target of 31 for the month is still alive, and I've now done 27 pubs in the West Midlands, putting it joint 16th with Durham and Isle of Man.