I'd never been to Hyde before, though I had driven through it shortly after the Shipman news broke all those years ago.  All I remember was passing a dentist surgery with red flashing neon sign, it was a mouth with flashing neon blood spurting out.  It was the least welcome dentist I'd ever seen, and both me and Dad have never forgotten how bizarre and brilliant it was.

What I most took from that was that Hyde had a sense of humour, though my first human contact in Hyde on leaving the Central station and crossing a road was an Asian version of Shipman (well, he had a white beard) silently mouthing 'hello' to me as we crossed together).

Walking through the market past a few scary looking pubs where men with missing teeth were spilling out into the road, I was almost reminded of Doncaster, but I'd hate to be cruel to Hyde before I'd even visited my first of four pubs I need to do here (two tonight, two another time).

Two wheezy women drawing money out at Lloyds Bank made each other laugh, and one said to me "pardon my French" but had she been speaking actual French, I'd have more idea of what she'd said.

My first pub was in sight, just next to Morrisons on the main road, note the hidden smoker cameo in my photo ......

As soon as I walked past the two gurning smokers (who winked at me) through the left hand door, I knew I'd struck BRAPA gold, as the pub opened into a large partitioned room, beyond which I'm sure a well-behaved baby was having it's bum wiped by an old lady on a table, hopefully not the pool table (maybe the poo table, haha - sorry).  A redoubtable friendly old landlady served me this majestic Rossendale Porter for £2.60 despite it being 5.1%.  She was also having to deal with a Scottish guy called Scottie (aren't they all?) who was giving her plenty of lip, so she told him that he was a Scottish twat and he needed to shut up, and he seemed to accept the charge with good grace.  An honest chap.  All good pubs, like shopmobility scooters, have a random Scottish man at the bar trying to be amusing, so it boded well.  A hi-vis Aston Villa fan walked in and was congratulated by all for a 3-0 win last night, the funny little man in green attempted a Brummie accent which didn't really convince.   I went to sit in the main room which had reassuringly little furniture and bench seating, where a dog lay so still, I suspected it was dead.  Turned out it was acting, the fact he was called Oscar seemed appropriate.  The amusing little green man (possibly an alien) says to the well behaved baby "what do you think of this mad, mad world eh?  We are ALL mad!"  It was enough to finally make the baby cry.  So I left.


I walked back towards the station, where just across the road was tonight's other pub, though I had to hide in the shadows to take the outdoor photo as some teenage chavs were screeching and being a bit lairy. 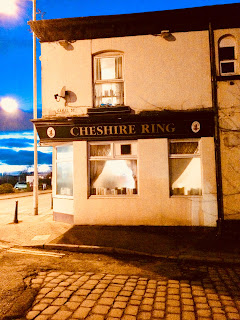 The screeching teenagers had obviously been heard through the walls of the calm sedate front room, for when I entered, a few petrified looks greeted me, but a flash of the orange scarf and GBG soon put their minds at rest (not really, that'd make things ten times worse).  This had that fantastic north west old school pub feel, where you enter through a corridor to tiles and high ceilings, with a bar that goes right around the corner, with a piano at the back, lots of carpet and shiny brass fittings.  The kind of pub Beds and Bucks sadly lack.  A young bar chap called Ashley, described as "new blood", was being trained up by the landlord who was drinking on the other side of the bar.  I ordered a stout and was initially charged £1.50, but he sadly upped it to £3.    Ashley wanted to make an impression, so gave me a soundbite with my pint and change ..... "violence should not be tolerated unless it is absolutely necessary."  No idea if there was any context behind the statement, but I told him 'cheers and amen to that!' just to encourage the youngster.   The landlord told everyone he had a 7% mild in the cellar which "isn't too mild".  Dire Straits played, another sign of a quality pub, though a less obvious one I've discovered by accident over the years.  Ashley was introduced to an old local called Martin who was described as "easy", but he had a tricky moment when a young lady asked for a vodka and tonic.    "It's his first day on spirits" warned the landlord, probably called Lee.  A five minute lesson on different tonics and fridge lights ensued.  The pub busied up in the front bar, and got very friendly and jovial.  So much so I was worried I'd get trapped in, so I squeezed by glass back on the bar counter, said goodbye to all, and wandered off to the dark railway station.

So two utterly cracking pubs I must say, two of the best I've been to this calendar year.  I reckon Cheshire Ring would probably be the populist choice if people had to vote, but personally I'd go Sportsman which had a quality which was rarer and harder to define.

But it might be easier to recommend Cheshire Ring.  It's kind of like if someone says "I want to get into this band, I know they've got 10 albums but I've got no idea where to start"and some helpful fan who has every album advises them to get the most populist 'radio friendly' one first, and if they like it, get the obscure cult fan fave later down the line.

And if that sounds like rambling nonsense, it probably is.

Back to York before 10pm, the kitchen is coming on well and has a nice lime green feature: 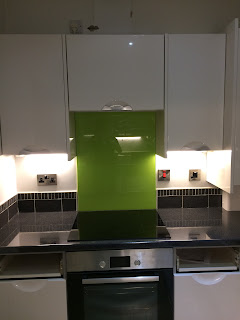 Back in North Yorkshire for day 4, I'll si thee for that one ya buggers.