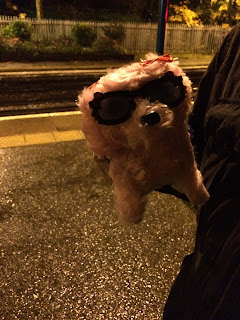 As the old BRAPA saying goes "one's company, two's a crowd" but when #PubMan extraordinaire 'Nick in Erlangen' expressed a desire to join a BRAPA day as part of his holiday to the UK, I was more than happy (you may say slightly overjoyed) for him to join in the festivities.

We met on the Manchester Piccadilly - Crewe train, and I knew he was going to be a nice chap as soon as he presented me with an 'emergency beermat' from Erlangen, which is actually a real place and not one of these fictional kingdoms I'd read about like Narnia, Atlantis and Oldham.  Plus, he's actually American and not German.  How confusing is that?  He loves Kent and eating meat and looks a very young 52. This sounds like a dating ad.  We discussed how similar the Adidas/Puma and Theakstons / Black Sheep families were.  Soon, we were in Crewe.

In Crewe, we were joined by the polyester paisley shirted figure of Matthew Lawrenson, who was hiding rather unsuccessfully from Luton Town fans, as people tend to do, and we hopped in a taxi to pub one.

It soon became evident that Nick wasn't feeling 100%, a combination of a caffeine tablet and steak craving plus travel sickness made we wonder what kind of day we were in for!  Although we had to break it to him that Barthomley didn't have a branch of 'Boots', Matthew sorted him out with caffeine tablets at least.  We finally arrived in the rural village for pub one praying for steak: 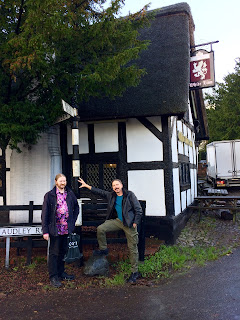 A sign told us to use the "other door", a door then told us "I am the other door", and after fathoming out a weird old fashioned latch, we were in.  This was one of those listed buildings, beautifully traditional yet not allowed to be anything other than single-glazed, so on this most coldest of days of the autumn/winter, we had to rely on the pub fire to keep us warm.  Although mine and Matthew's approach to entering a pub is "try and be as inconspicuous as possible" (despite our at times, questionable dress sense), Nick had a different outlook, as he said "I may as well act like an American tourist, it's what they expect from me!" and was soon challenging our mardy faced (but ultimately good) barmaid with a barrage of questions - "can I have 2 blue cheese steaks, no ciabatta?", "do you have jugs?" (she both did and didn't), "what's the WiFi password?" "can I put coal on the fire?", "is this the pub dog?" "who am I?" "where am I?" The grey ancient locals lining the pubs looked at us in the kind of judgey way that I normally look at people when on BRAPA duty.  It was like the tables had been turned!  Our Marstons ales were dull and well below the temperature you'd hope from real ale, Nick's thermometer device told us that.  But the steak report was excellent and wannabe pub dog Dexter was a gem.  "He's no Twog!" said Nick, much to his owner's relief I'm sure.  By the time I asked the barmaid to ring us a taxi, her patience seemed to be wearing thin.  I hated myself for moaning about the cold, this is how pubs were in t'good ole' days!  The loo was outside, another great feature of a very characterful start to today's pubbing.

After another jolly taxi ride where Nick asked our Iraqi driver his thoughts on Saddam Hussein and George W Bush whilst me and Matthew sat in the back trying to be invisible , we were soon at our other village pub of the day, and Nick said rural pubbing was just the tonic after feeling a bit strangulated by the hustle and bustle of central Manchester the previous night. 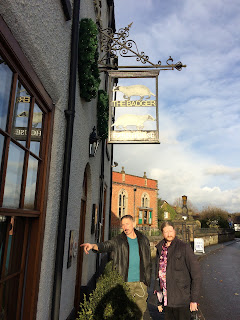 Warmth, festive decorations and wonderful locals set the scene here for a really positive experience right from the off.  Okay, so the pub lacked something of the olde worlde charm of the White Lion, but it "had enough in the locker" to make up for it.  A pouty barmaid again had to confess to Nick that jugs weren't on offer, so he settled for a three thirds taster tray (first time I've seen one of these up close!) whilst my pint of something local and golden was one of the best of today, a day where I must say beer quality was at times a bit lacking.  No problem for the group of oldsters to our right, the local CAMRA gang getting their drinks for free supposedly.  Before you could say the word 'bribery', our attentions were drawn to an upside down Christmas tree.  A very bizarre creation, but it captured Nick's imagination enough to perform a hand stand next to it whilst Matthew held his legs ("I could've done it unaided if it wasn't for the two steaks!") and I took the photo.  This was no ordinary BRAPA day of sitting in the corner with a pint being judgey!  The local CAMRA lot asked why we were here, and were absolutely amazed and astonished when I told them about BRAPA - most people are quite interested, these were gushing with curiosity and it was great.  There was a village bus racing past the window, but as we were behind schedule and there were three of us, it was another taxi back to Crewe.

After a short taxi ride, of which I cannot remember any details or conversation, we were back in Crewe for a pub a little bit out of the way, 22 minutes from the railway station...... 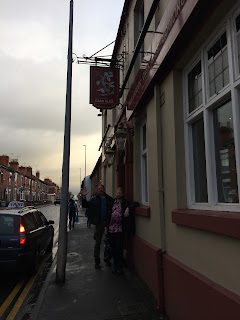 "It's owned by Poles" the CAMRA locals in Church Minshull had told us.  "Oh, is that why it's called the Hop Pole?" I reasonably surmised, but was just laughed at.  "Haha, a mere coincidence young man!"  Anyway, no Polish signs here, a proper little side street gem in my opinion, I was very impressed, very characterful bar area and a great welcome from the landlord, who extended it by telling us where the loos were, what events were on, etc etc.  Nick was impressed by the little bell pusher things in the lounge area, of course they didn't work but always nice to see.  As are bowling greens in pubs, how had I not been here before?  Why wasn't it in the last GBG?

We had a bit of a march on our hands, in the icy rain, to make the 16:08 to Nantwich for pub 4, but we did it with time to spare, just as well cos Nick needed a ticket, and we passed a teenager biking on the pavement which Nick correctly called out as a Tweenage Twiker.  By jove, I think he's getting the hang on this BRAPA lark! 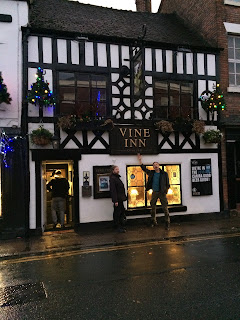 No sooner had the above photo been taken than a bearded figure shuffled out of the gloom to greet us.  Hurrah, Tom Irvin was here.  The pub was a heaving mass of scallywags and chavs, all jostling me for a place at the bar, and neither Matthew or Nick were very forthcoming with telling me what beer they wanted to order so I went for a beer called Old Indie cos I could see it and something else had just gone off, but it was a bit dull (SBS C), I'd definitely had a better pint of this in Salford last April.  I'm not saying I was a huge fan of either the Black Lion or Crown, the 2017 GBG entrants, but to deguide both for this one didn't feel quite right to me.  I was in a kind of good mood though, the day was going well, company was great, Hull City were 2-0 up, the scores were coming in, so I could cope with a few digs in the ribs from local youths boasting about the time they did lots of cocaine and how they should've been arrested a lot more than they had over the last few years.  So we sat down, people roared as some rugby men did something interesting, and the older pub folk were actually friendly, but it was all a bit chaotic.  The 'Lowry' beer came back on (so a Hydes pub then?) , much better, had halves, as Hull City conspired to lose 2-3 in the last minute.  Me and Tom didn't know whether to laugh or cry, so we laughed. 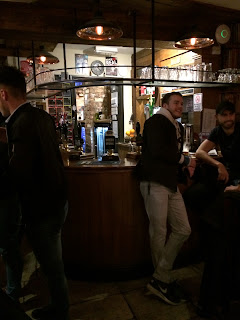 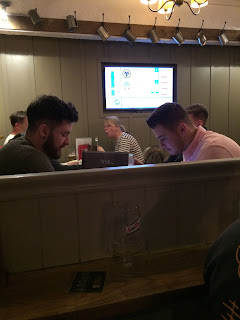 We had more than hour to wait for the next train, so seemed sensible to look at WhatPub and try and pick out a slightly decent 'pre-emptive' or two.  The first, called the White Horse appeared promising on the surface, what with it's Salopian ales, lovely pub interior etc but a weird drunken woman and some seriously vinegar beer was a good reminder as to why the GBG is good quality control most of the time!  Eating Cheese Strings was the highlight.

We even had time to pop into another pub, this looked even more unpromising but despite the blue lighting, choice of Theakstons or Theakstons, and hardly any customers, it was much better than the White Horse.  Friendly too. I think it was called either the Railway or Station.  Something train themed anyway.  And actually a really nice half a Theakstons, and you can't always say that! 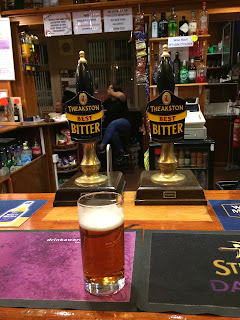 There was some debate as to whether to hop off the delayed train at Stockport or stay on til Manc.  We'd said goodbye to Matthew, and Tom, who'd originally thought he may be able to come for a drink if we opted for Manc, then decided he didn't really have time.

So just me and Nick, and we soon realised the Metro was bust, so we went to hop in a taxi despite my walking protestations, as he wanted to see if his buddy Tandleman was still at the Crown & Kettle.  He did amazing to flag down a taxi, but it was pretty much gridlock so we hopped out almost straight away and said farewell as I went to get some crazy Saturday evening Manchester pub ticks done.

The rain was hammering down by now, my phone died, I pissed in an alley, but amazingly, the pub (cafe) I'd been looking for was within sight.  And I'll write about that one in the coming days cos I wanna egg n soldiers before bed!