The bell tolled 3pm on Friday (not Big Ben, we can't expect miracles), and me and work buddy Dave Beckett (Rotherham Utd fan, lager drinker, Oasis, Beatles, Weller fan, top no nonsense South Yorkshire man) shook hands with our Aussie counterparts at the end of a day visiting our Bank comrades in the London office, with it's escalators, crazy lifts etc. putting the L**ds equivalent to shame.

Dave's train back was at 8pm, I was staying overnight in MK cos life's funny like that, so we had almost 5 hours of BRAPPING in front of us (not that I'd engineered this trip with pub ticking in mind, that would be naughty).  Getting the tube to Whitechapel by mistake wasn't a good start, but we doubled back on ourselves and were soon at pub one, still before 4pm. 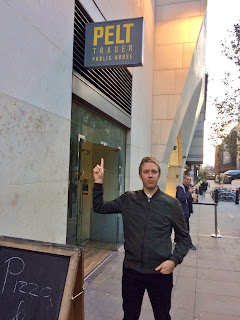 This was a valuable tick as it's one of those Central London places that don't open on weekends, so this was a rare opportunity to get it 'green highlighted'.  It looked like a 'lock up' from the outside, and was of the basic dark interior which BrewDog would approve, where emphasis is more on necking your beer as fast as possible and moving on than settling down into an armchair in front of the fire with a twog at your feet.  I tentatively approached the bar, this was my first pint since my 'skin surgery' (mole removal) which I'll talk more about in the Bucks blog tomorrow.  Dave reckoned I merely looked like I'd fallen off a bike, but he upgraded that to "Holbeck Heroin Addict" as the day progressed and my scabs started to bleed / ooze pus.  Lovely.  Thank god it was dark!  I asked the barmaid what the cask ales were and she pointed vaguely at some taps on the back wall.  I vaguely mouthed something back, so fuck knows if I drunk cask or keg or what, but it tasted ok in a London kind of way, Dave got something called N1 which was too trendy for him.  We were still 'directing operations' back in L**ds amazingly/irritatingly, so Dave kept rushing out to take calls as it was very noisy.  There was a canoe on the ceiling.  3 girls pouted and took a selfie, I tried to get a great photo of them but failed as I'm not Richard Couldwell.  But if you are gonna be beaten up in a pub by females, this'd be the perfect place for it with an already damaged face.  I was glad to move on.

We walked across London Bridge now, taking a couple of tourist snaps as the light started to fade hoping no terrorists were going to plough into me and end BRAPA for good. 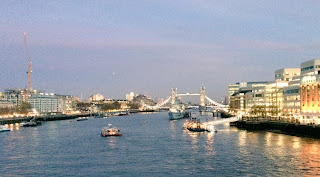 As soon as we rounded the corner and I saw the cobbled side street and Henry VIII pub sign, I thought hang on, I've been here before!  But apart from being busy, I have no memory but am guessing pre-BRAPA A-Z circa 2012/13.  It might be that I saw how busy it was and walked straight back out again. 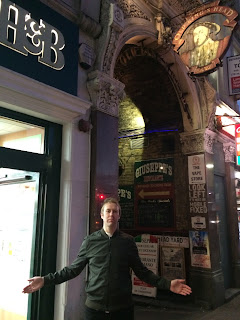 But comparatively quiet tonight for such a busy area of the city.  Dave was delighted to see Fosters on tap, I got something ok from St Austell because it existed, and we took them to a posing table in the centre of the pub where a modern day Henry VIII hovered at the bar muttering stuff about Meghan Markle, and a woman in a fur coat looked like she had plenty of secrets, and a younger man behind her kept looking at her like he wanted to know if those secrets were underneath the fur coat.  The staff were an efficient quirky bunch, wearing red kiminos generally as Mark Crilley pointed out on Twitter (the blokes had red patterned t-shirts to try n fit in), the kind where if you say "haha, great Children in Need outfit", they'd be offended and tell you they always wear this.  So hard to tell in London.  You could walk into the pub with a bowl of Angel Delight on your head and no one would bat an eyelid.  My scars certainly weren't getting the attention they had in Harrogate the previous day, but that could be because most people from Harrogate are bell-ends which I'm sure even they wouldn't dispute if they really really were honest with themselves.  On a happier note, we were doing well for time and I was almost managing to keep up with Dave's drinking speed, though I suspect he went slower for me.  Decent little boozer this, just don't let me go in ever again!


We wound our way down through some side streets, and came out in 'Borough' where I had two pubs to tick off. 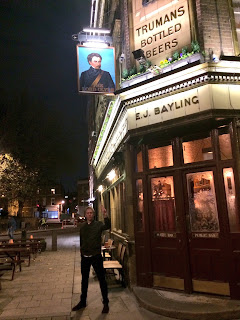 The corner pub had a wonderful exterior, and was probably pretty bloody good on the inside too but it was that choc-a-bloc you coudn't swing a cat, or even a kitten, or even one of those little handbag dogs.  We breathed in and moved half a dozen bar blockers (who you could blame cos there was literally nowhere to go), and Dave found Carling, I got some effervescent brew which may have been from Adnams, the glassware was that stupid.  We managed to secrete ourselves between bar area and fake fire, which was 'burning' happily.  I went to the bogs (all the way around the other side FFS!) to redress my wounds in the non too sterile cubicle, and found Dave again who was being amused by the most cockney man ever.  It was all funny walks, big gestures, rhyming slang, it was like if you asked a northerner to draw a cockney, this is what they'd come up with.  Our space and light were further blocked out by young lurch, a fresh faced giant of a boy who smiled politely and had an army of small females around his waist.  Despite the chaos, you could feel the quality here.

After a slight bit of navigating, the next pub was hidden away not too far but even more off the beaten track, if you can say such a thing in SE1.

The biggest surprise here was that we walked into this classic two roomed corner pub to find it practically deserted, what's going on?  Is it that bad?  Well no actually, I'd probably say this was the nicest pub of the night though perhaps easier to say when you have room to breathe! After ordering a meaty life-giving pint of Harvey's Old Ale (Dave found Heineken to mix things up a bit), we were quite happy to perch at the bar just across from an old dude doing his crossword, something totally unachievable back in the Lord Clyde.  The furniture was a nice mish-mash of whatever second hand shit someone had put on the rubbish tip, Dave noted the bar surfaces were nicely scratched and old, staff friendly though the girl who served us had a panicky look in her eyes like she may have  breakdown if she had more than 2 customers to serve at once.  She had a t-shirt in the style of "Toys R Us" logo, saying "Pars R Us", no idea what that meant, maybe she loves Daddies?!  Or Golf?  Dave told me some classic tales of his drunken football away days, and taught me how to pretend to be 'ard when you're actually not, it was a good life lesson for future BRAPA trips to Leicester and Maidenhead.  Real quality this. 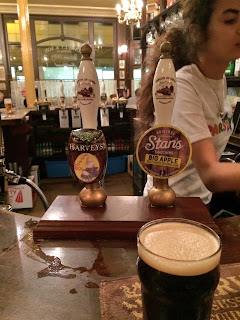 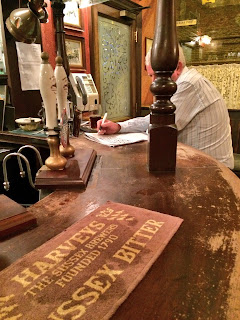 We got the Tube back from Borough to Barbican for one last pub tick, time had raced on despite our best efforts and Dave need beer for the train too, so it really was a 25 minute trip this. 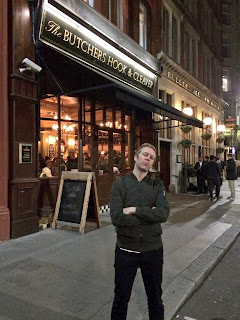 Another one of those "doesn't open Sat or Sun" pubs I was determined to do, but to me it was up there with the likes of Phoenix on Old Broad Street for London blandness.  Large and loud, terrible acoustics, and it was my round as Dave went to wrestle a table, I finally got served - Fullers Oliver Island (I've had it better kept in York last week!) but the barmaid was being slow, topping it up, serving 3 people at once, etc. so I looked up at the 'mezzanine' level, trying to get a couple of good photos for my blog.  Fairly pleased with the outcome, I was smiling to myself when a barmaid sprinted over to serve me, so I told her I'd already been served, and she got mad with me!  So here's a lesson, don't smile in the direction of the staff unless you want serving!  And that summed it up.  We drank our drinks at yet another posing table, and tonight's pub ticking had been yet another illustration of why long standing GBG entries are so often more rewarding than newbies.


Back at Kings Cross, Dave was convinced he knew of an off license down a side street, and he wasn't wrong, so he stocked up on San Miguel and I got some nibbles.


I needed to be disciplined for tomorrow's 'Bucks Party' so I got myself straight to Euston and took the next available train to Milton Keynes.  I made a fool of myself ordering a Subway Sandwich (only third one of my life, but each time I've not known how to answer the many questions) and found the Travelodge to check in for what turned out to be quite an early night.

I'll be back tomorrow with my Bucks adventure if you can bear the suspense / reading another one of these blogs.