So, just to recap from the previous blog.  It was Saturday afternoon, 4pm, and Hull City were 1-0 up at Sheffield Utd.  We'd been to the Hillsborough Tap, Ship and the incredible Wellington.  3 further pubs awaited, and all was well with the world.

The second half commenced with my work friend Joanna telling me she was in the midst of a York pub crawl with some other ladies, and kept sending me "guess the York pub" pictures:


Hull City conceded an equaliser which had been coming, and then remembered how terrible they were defensively and shipped 3 quick goals, making the "wish you were here on our York pub crawl" messages harder to take.

I could've been here: 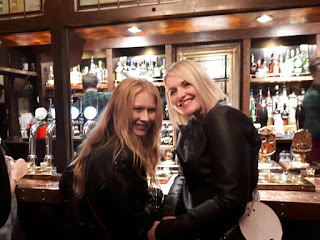 But this was my reality: 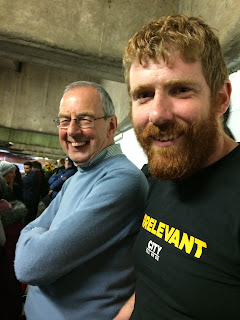 Crikey!  Soon, we were put out of our misery and after saying farewell to good ole Dad who needed to get home for tea, me and Tom wound our way West and happened upon pub number three: 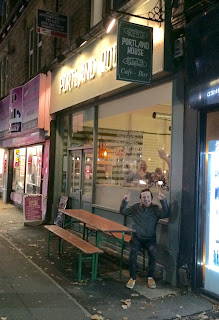 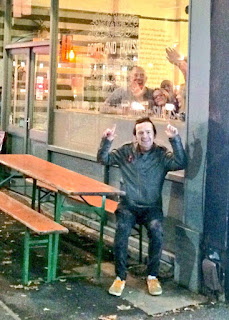 All the excitement happened in the first 5 minutes here, and it wasn't until we got inside to find a group laughing at us that we realised we'd been photobombed, and I had to serious lighten and edit my photo to get the full genius of their 'amusing' ways.  The wait to be served was fairly painful, and the group next to us chatted with much feeling in their voices with a probable staff member about how this place would probably close on 3rd Dec if a buyer wasn't found.  When I relayed this to Tom, he (not unreasonably from a strategic BRAPA perspective) suggested the sensible move might be to walk straight back out(!) but the walk, 4-1 defeat, and sense of sympathy for the pub made me stay.
Besides, everyone was drinking an ale called "Last Hurrah (to youth)".  Fitting perhaps.  SBS B, it was billed as a "Super hopped North American party beer" which made me want to punch everything in the face.  Not my North American readers though obviously!  We sat down and I could tell Tom was about as non-plussed about the place as I was.  Large Micropub?  London style "beer canteen"?  With knowing tiles with words like "ginfinity", "beardolicious" and "craftology" (i'm making these up I think) scrawled on them in black marker pen.  Having said that, warm, welcoming, and very west Sheffield which I'll expand on in next pub.  I can imagine it will be missed, not only by pub-tickers who've done it, but by uni students.  But I'd be crying more if Wellington, Shakespeare, Blake Hotel, White Lion, Kelham Island Tav, Bath Hotel etc were going! On the way out, I showed the crazy window group the lightened up photo.  They were semi-amused.


We then had the most painstaking walk of the day, joining up West Sheffield to take us from Sharrow to wherever Commonside is:

This was a great looking pub with superb windows and a small frontage which opened out into a huge pub inside, which is why they call it the Tardis, which is an infinitely better name than Hallamshire House, which is just as dull as the name 'Portland House'.  What happened to the days when pubs had pub names and didn't sound like accountants premises?  That was my first thought.  My second was why is there a man at the door with a dog buried in his crotch.  After ordering something Thornbridge (I basically closed my eyes, yawned and pointed at one  - SBS B-), Tom asked if the dog was a contender for dog of the year but the fellatio element put me off, despite it's well behaved nature.  The pub was so outer Sheffield, a youthful to middle aged well to do community, everyone very pleased with themselves despite being from Sheffield, loud Saturday evening "top bantz", trying to appeal to lovers of traditional pubs as well as the modern, leather, well heeled foodie crowd, and falling a bit short of both in my opinion.  The only empty room was, no surprise, the pubbiest, delightfully gloomy with a snooker table filling the floor space.  This was fine til some pissed up lads came in, and made us be referees cos they didn't know rules like "if you foul on the blue, it is 5 away" which just made shake me head in silent disgust, but never mind cos time to move on to our final pub of the day.


Luckily, the next pub was very much just in a straight line up the road, even though this was now classed as Sheffield North: 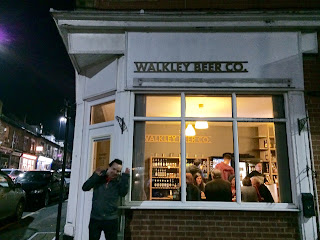 If there was any doubt how micropubby Portland House was, then this was a more welcome "piss in a unisex broom cupboard" style return to micropub form in Walkley.  Very much a beer shop where people have decided to put some chairs and handpumps in, friendly welcoming, I have no idea what I ordered but it was an ale of some description.  It tasted of ale.  But I was too hazy to remember any details, it may well have been rather forgettable sober.  The clientele were posh Sheffield, a bit older than those at Hallamshire House, and we squashed on a table where an ancient philosopher contemplated life as a radiator burnt his hand without him realising.  That's about it.

Tom navigated us back to a tram stop somewhere not too far from Hillsborough, it was like the day had come full circle as the fireworks crackled above our heads in the cold night sky.

Sheffield done for another year, and a timely early boost to my South Yorkshire ticking, I have 8 to tick off (plus a pre-emptive) over the next few Tuesday nights where possible.  One may need a car, one doesn't open til Thursday, one is a 'Spoons, so should be done by around Christmas time.