BRAPA - Me and My Donny Matrix

When your face is a mass of healing scabs, it is important to go to a town where you can blend in, rather than stand out.  So imagine my 'joy' when I realised I had a Doncaster pub to tick off for what felt like the millionth time in the three and a half years of my BRAPA existence.

About 30 seconds after leaving the railway station, a heroin junkie version of Barrington from Maid Marian and Her Merry Men asked me for money.  Then a man lay down in the street.  Then a woman with no teeth went to Crawshaws to ask for some cut price meat.  Not sure how she'll chew it.

Hull City were in action down at Millwall, so I thought it a good omen when I heard "Tiger Feet" by Mud blaring out of a very real looking pub.  Soon I was in the spooky abandoned market place, almost certainly used as a real filming location for Scooby Doo.

"Zoiks", I thought, as I realised my pub was the third in a row of previous GBG entries, with the Marketplace Deli Ali thing on the left, and the rather wonderful Masons Arms in the centre.  This was on the corner, I couldn't take a close up pub photo as a topless man in an upstairs window was gesticulating angrily at nothing in particular.  Nothing surprises me in Donny.

Crafthouse and kitchen?  Steady on lads and lasses, this is Donny not Kew Bridge.  But the pub building felt sturdy and old, even if the interior was very Mexican 'Day of the Dead' themed with skulls everywhere and the kind of U.S. punk, rock n roll music I could appreciate.  Electric Frankenstein, Zeke, New Bomb Turks, you all know the bands.  No Dire Straits in here.  There were only 4 customers, a trio of young bar flies with bandanas, who bemoaned the fact that they "had nowhere else to go in town until this place opened".  And a peculiar bag-lady in front of me.  She wanted to pay by card, £5 minimum limit, so she spent ages painstakingly choosing two bags of Pipers crisps to break the limit.  Just when I thought she was done, she asked "so, is this a real lambic then?"  No-one had a clue what she was talking about so she was politely sent packing.  More problems ahead for me, 4 ales on, one a raspberry blonde (a style I cannot cope with) and 2 had nuts in, and as you may know, I have a serious nut allergy.  So I'm not going to order a beer called Snickers, or one strangely called Farraro Rocher which was either an in-joke or terrible spelling.  So I pint of Hitch Cock it was (SBS B+, very good).  Why can't they make beer out of beery ingredients like they used to?  It wasn't until I was leaving that customer number 6 arrived, a beardo who strode past the handpumps eyeing them with the disdain of a Victorian Landowner seeing his West Indian slave relaxing in the field, before settling by some silver fonts  and stroking himself.  Time to leave.

After a traditionally scary walk across town back to the station, where I did my yearly "get lost in the Frenchgate" centre, I had a pre-emptive tick on the agenda that a Donny lad at work had told me about, and I think Tom had mentioned it too.  It was actually on one of the platforms. 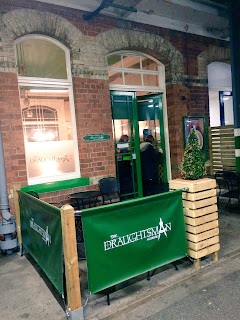 If I'd been expecting something cut from the same cloth as York, Harrogate and Sheffield Taps, I was delighted to see something a lot more intimate, personable and classy.  Green tiling, is there a better brand of pub decor?  Green ceiling too, and a young suited barman with elfin ears and a strange shaped head calling me "sir" , being polite, and making the customer feel valued.  No, not at all what I'd been expecting from a Donny station pub!  I like nice surprises.  Okay, so "are you drinking in or taking out?" seemed a slightly odd question, as I was tempted to reply"oh yes, I'll be retiring to your huge beer garden overlooking the stream, sheep and meadow just out the back".  The pub felt full with about 5 or 6 people in, which seemed about as busy as it got tonight at any one time.    After a pair of bananarama loving gay blokes sat across from me, a loud tattooed Hull KR fan stood in the middle of the pub and slagged off York Tap for having "too many obscure beers".  Tut, you'll never fit in on beer twitter with that attitude mate(!)  Seriously though, he was an domineering kiss-arse of a bloke otherwise, constantly letting everyone know he was from Hull and probably countered the "Tiger Feet" omen with his shitness, hence why we drew 0-0.  Embarrassing, I avoided eye contact and hummed along to "Everlong" my Foo Fighters, changing the chorus to "Everitt" obviously cos I'm cool like that.  But overall, surely this has to be a shoo in for a GBG either next year or 2019.  Classy.


So that was all very lovely.  No more Donny for another year!  I always say that.  But I always return.  Train back was nice n quick.  And you can't say anymore than that.

Wish me luck on Saturday's Cheshire trip, looks like I'm going to need it! ;)