Just to re-cap, it is Saturday evening in Manchester.  The chaos is intensified by a broken down tram, blocking the city centre.  The rain is pelting down in thick wet blobs, the type you only get on this side of the Pennines.  But the vibrant nature of the revellers means it is evaporating as soon as it has hit their golden skin (probably).  Today's hero, Nick (he of Erlangen fame) has gone to try and meet some mysterious chap known only as "The Tand" so I've scurried down a back alley, where my phone dies and I have to rely on memory of the GBG App I've just seen to navigate my way, stopping for a risky piss behind a wheelie bin.

I pass some huge glass windows with a few gossipy women and shivering boyfriends stood outside working out where to go next.  The doormen look uncomfortable.  I glance at a sign, amazingly, it is the 'pub' I was looking for, I thought it was a spa, leisure centre hotel complex. 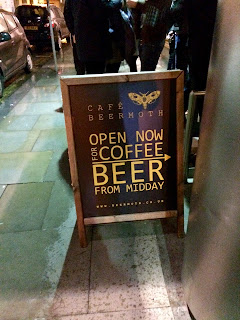 As expected, the place is an echoey bright mass of people, mainly in their thirties, sat on the kind of benches you find in Pret a Manger or the back of York's Brewdog.  There are no handpumps, but just as I'm about to ask if they sell beer in here, I see a series of tiny blackboards, some have a 'cask' option so I order something with a name which sounds New Zealandy.  Probably a hop variety.  That's the most insightful 'beer' thing I'm going to say all night so if you don't like it, piss off now.  I go to find a seat, it's always going to be a case of propping myself on the end of a bench.  Out of courtesy, I ask the group anyway and am stunned when a man with a slight Scouse accent says I can't sit down.  He's joking and laughs.  I'm a bit animated after a long day I tell him, "Don't!  I don't like it when people do that!" I say half mockingly.  His female folk sympathise with me and slap him playfully on the arm for being horrible.  I pull my bobble hat down over my head, pull my collar up, and sup my pint balefully.  I must look like the tramp party pooper no-one wanted to invite to the party.  The group's friends (all a bit older) appear, nowhere to sit.  Scouse joker moves behind me, gives my ribs a squeeze, and says "you may have to move this time....", but again he tells me his joking.  I don't know if I like him.  I don't like moths either.  They chase me around my flat and terrorise me.  I used to wonder why.  Then I realised premier pub ticker Duncan MacKay is a moth enthusiast.  It all makes sense now, they are protecting their 'king of the moths' and trying to intimidate rival pub tickers.  I wonder if Martin Taylor gets chased by moths.  I wonder if a 'beer moth' is a real species.  I bet they are stupid if so and fly into walls.  I think I'd better leave, so I do.

I walked back onto the main road and up towards a place called Shudehill which I'd vaguely heard of.

Outside my next pub, an old man is smoking and pretending to be the bouncer, just so he can have a joke with poor unsuspecting visitors going in,  So I wait til he is distracted and slip in. 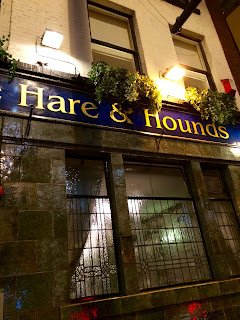 Ah, this is more my scene, a pub of extreme pubbiness.  And you know how I knew, well you could tell right from the off that one moment of hesitation and the locals would be right on ya!  And so it was as I deliberated what part of the bar to stand at, two friendly old blokes shoehorned me into the gap between them and spoke to me as though I was a timid waif who'd never been in a pub before.  They stared intently and summoned a barmaid over for me, I could only spy two ales (Dizzy Blonde, which I can't abide, and errrm Doom Bar) and couldn't afford another hesitation so I went Doom which to be fair, was quite a solid pint (almost literally haha) and came in the correct glassware and quality was good as could wish, and I didn't care a jot as I sat in the backroom amongst a load of grizzly jowled old pubsters.  Take that Beermoth!  One woman next to me did elbow me in the side and say "ey up, a know that group to our right are having a reet good time, but I wish they'd pack it in being so bloody noisy!"  She had a point, but I was too busy watching a sleeping old bloke get more and more clothes piled on him til he woke up.  As the main group dissolved into the Manchester night, I recognised a disconsolate looking figure slumped in the middle of the room.  It was only our hero of the day, Nick in Erlangen!  Had the caffeine tablets worn off, or had he been out-crazied by the crazy locals?   He told me he was on Holt's Bitter.  But where did he get hold of that, did he get his sword out and threaten the staff with it til they let him drink the private reserve?  Oh well, he was on his way out so I bid him goodnight, went for a slash, and headed to my final pub.

And just a couple of minutes down the road, was my final pub.  I walked past it though, it was behind a reggae bus (whatever one of them is), and it looked and sounded like some crazed nightclub.  This was BRAPA outside the comfort zone!

So the GBG says it "attracts an eclectic clientele".  Of course, it is important to define "eclectic" in CAMRA terms.  This is, (a) someone under the age of 50, (b) someone with a darker skin tone than white, and (c) someone with a vagina.  Now we've solved that mystery, you find me stood three deep at the bar wondering how the heck I can get served.  Luckily, everyone's coked up to the eyeballs so I dart into a gap just in front of the only handpump I can see on offer, no idea what it was, does it matter?  It was top quality though, I was surprised on the night, but being the only cask beer on, well, perhaps that explains it.  Still, after the Holts v Doom Bar incident, maybe they had 10 on and I didn't notice.  A lanky scary young man stands next to me.  He puts his arm around me.  "We'll get you served next mate!" he assures me.  (Errrm excuse me 'mate', I've stood at a lot more bars than you AND I was here before you, of course I'LL be served next!)  So imagine my chagrin when the barmaid turns to HIM.  He lets me go first, and smiles at me in a saccharine patronising way.  Utter uggghh.  His t-shirt said "Only The Great" on the back.  I misread it as "Only the Cunt" in the failing light.  Poor chap.  He was only trying to be nice, probably.  People were dancing.  A young West Indian lady prodded me and tried to get me to join in.  I pogo danced for two seconds.   Then my Mum randomly rang but the heavy handed bouncer (a real one) didn't let me even stand in the porch to take the call.  Then an intermediary bloke told me the girl he was with loved my rucksack and wanted it.  Where did I get it?  Errrm off Amazon about 5 years ago.  That didn't help.  Time to leave and I was prodded once more for not dancing by our West Indian friend.

I weaved my way back through Manchester, onto the next available train for York where I had a disagreement with a girl for getting on the train before people had finished getting off (a pet hate of mine, especially after a few pints when I'm a bit more vocal), and we had to sit side by side all the way to L**ds in those little flip up seats, before she 'alighted'.  I was back in York well after 11pm.