It was time for the half yearly BRAPA day out with those brave folk from work who are willing to trek from pub to pub to help me in my quest.  Regulars Rich Ellis (drinking lime and soda for alternate pints as part of a health drive) and Jason "Mr Angry" Garrett were with me, and we were joined by the reassuring presence of Piper, though four people were unable to attend which was disappointing but not unexpected!

After meeting at L**ds and getting train to the wondrous town of Halifax (one of my favourite pub towns in the UK), my GBG app decided to make a fool of me in front of other people by having our first pub plotted in the wrong place, just as did with the Barum Top when I came here a year or two ago. Finally, I found it hidden behind a theatre.

The scouse landlord was smoking outside when we went in, and having explained BRAPA, he gave us a run down of the highlights of this self-proclaimed "best pub in Halifax" which was obviously (a) a bar and (b) not quite as good as three other pubs in town I can think of.  Having said that, it was excellent and the line "you'll be impressed with our toilets" is one I'd like to hear more.  In this case, it was a reference to 1920's nudey lady pictures.  Very North Rigton or Phoenix in York.  "They are 90 years old but the girls still look great!" declared the bald customer who'd perhaps had one too many fizzy keg ales from the taps at the end.  I was excited to see Cloudwater cask "yes, your eyes do not deceive you" said the barman.  Cloudwater are a brewery I always unfairly slag off for being the face of "craft" so a bit ironic I first see it on cask in a bar with "craft" in the title.  It was beautiful and we took it up these mini stairs full of board games and weird instruments to a hidden side room, with tiling which made you feel you were in a chilly fish & chip shop.  Another point to the barman was that he gave us complimentary pub beermats as souvenirs.  CAMRA should enforce this as policy.  Though his slagging off Barum Top 'Spoons for getting in the GBG was something I couldn't fully agree with as I thought it was pretty decent.  What happened to pub unity?  However, all in all a cracking little place and a good start to the day. 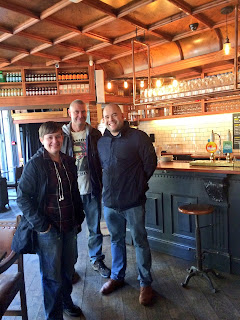 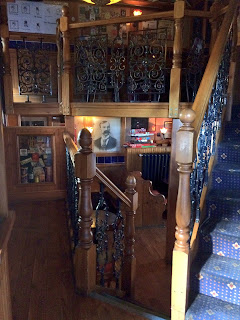 A few minutes walk away, I accidentally navigated to the back of the next pub which was almost traumatic as a Dad was teaching his 6 year old boy to drive, almost with disastrous consequences for BRAPA as we had the inaugural pub photo.  It all looked a bit seedy and industrially estatey. 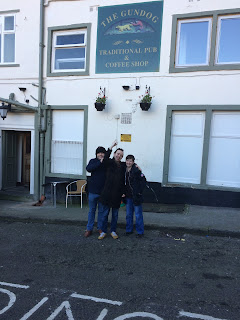 I got the barman to confirm that we hadn't used the main entrance, but not to worry as this pub was a rival to the likes of Big Six and Three Pigeons for pure Halifax pub joy.  The central corridor area where we were served, rooms off left and right.  I briefly tried to explain bar billiards to the gang - none of them had even seen a table before (I may have to send them to Reading for a lesson), though I refused to sit in here on account of the bookcase wallpaper!  Rich checked in on Facebook, which also must have been confused by the pubs gloriousness, as it asked him "is it good for dancing?"  I suppose at this time, with no customers, you could pirouette from room to room.  I was meanwhile like a pub tourist, snapping away like David Bailey (if that is a real person) for you don't get pubs as photogenic as this very often.   We sat in perhaps the nicest room off to the right, where some unconvincing but admirable local artwork was on sale, and almost regrettably, nothing weird or upsetting happened until we left, possibly because I wasn't concentrating. 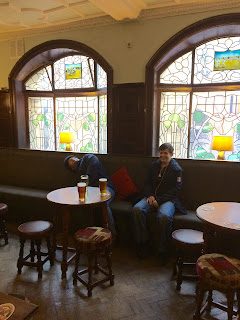 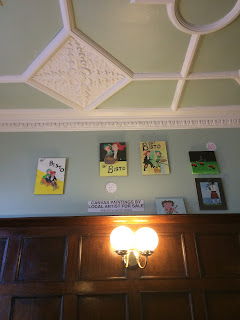 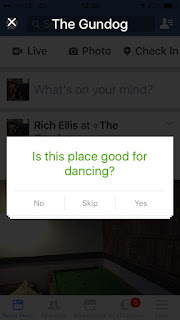 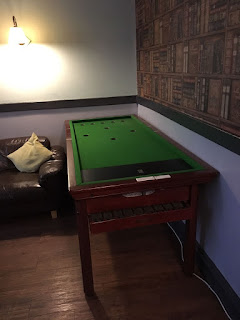 I managed to flag us down a taxi and despite the friendly taxi driver not seeming very confident where Scholes was, he took us there pretty directly, missed the turning, and ditched us in a lay-by.  It was rural up here, and the mist had returned. 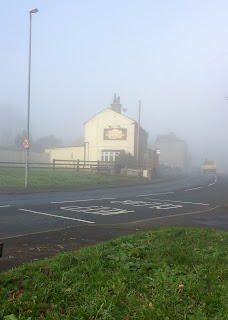 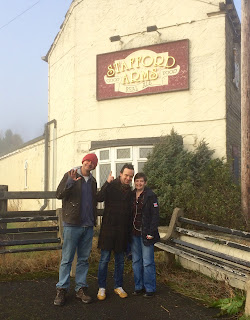 Proper crazy pub full of mad staff and locals, this is exactly why I'd say (so far) that West Yorkshire is the strongest county I've been to in BRAPA so far.  The barmaid had strange glint in her eye, and when she told us "it was a cold day to be walking around these parts", I admitted we'd cheated and got a taxi.  "Oooh hoh, cheating is allowed in here" she replied with an exaggerated wink at several of the chaps propping up the bar, who suddenly looked a bit sheepish.  The buzz word of the pub was "black" though, hard to tell why they found the word so funny, but they did.  Whether they were doing impressions of the artist in the Fast Show who paints in black, or the never-ending discussion about local liquorice which sounded like some kind of euphemism I couldn't quite get.  We sat round the corner in a cosy lounge of this Tim Taylor's pub and Rich decided everyone was probably swingers.  I went to get her to phone a taxi which was another strange but funny foray into their lair, but a communication breakdown meant the others didn't know I'd booked it, so when it arrived sharpish, we had to neck our beers and run off, which is a good way to leave this classic pub. 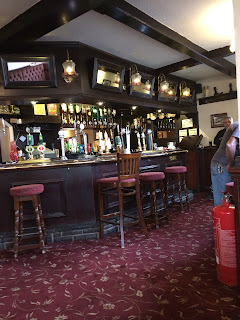 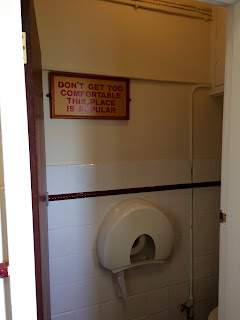 Another short taxi ride found us in Cleckheaton, to a pub I'd been 'warned' might get in the GBG soon but I kind of took it with a pinch of salt because Cleckheaton isn't the kind of place you'd come to for a pre-emptive.

Warm and close-knit with a bustling throng of couples who seemed to be combining speed-dating with eating meals, for during the 35 minutes or so we were there, THREE different couples/groups started and finished a meal on the table next to us, each one consisting of beef, gravy and stewed veg.  Talk about faces in the nosebags, but how romantic such a rushed meal can be is unclear.  One thing was clear, this must be a candidate for the happiest pub in the UK.  Everything provoked uproarious laughter, with a jolly little baldie man at the bar the main ring leader, like some hyperactive West Yorkshire Dalai Lama.  If you ordered three pints of "Old Tosser" in York and said "three old tossers because we're three old tossers", people would roll their eyes in a "ugh, CAMRA twats are so unfunny" kind of a way.  But here, they almost had to get paper bags out to control their breathing they were laughing so hard.  One middle aged woman who I'd suspected hadn't appreciated some of our more colourful language, turned to us, and said "I hope you enjoy the rest of ya pints lads (and lass)", whilst a hi-vis new arrival swarmed the bar and seemed to be doing a constant jig, or he may have had a nervous twitch,  What everyone was on, I couldn't say.

Rich used his "local knowledge" to locate a taxi rank in the middle of town, and soon we were Norristhorpe bound, a place I assumed had been made up by the GBG compilers as a practical joke to send pub tickers on a wild goose chase, but just like Kirkheaton and Altofts, it is actually real!

With the sun setting over outer Dewsbury, it seemed a fitting time to go to a Rising Sun pub, and in true Heavy Woollen tradition, there has to be one pub of which my memories are slightly hazy, just as in the the Taproom Batley (2014), Reindeer at Overton (summer 2015) or the King William IV in Greenfield (summer 2016).  However, we had some early controversy as my Hawkshead Brodie's Prime (I was the only one on the dark ale still, cos I'm, hardcore obviously) was pinched by a woman who sped off to an elevated crowded drinking area.  When I finally tracked her down, she said "that's your pint isn't it?" in a very weary voice, which made me think she has a habit of doing this.  I think "grrr gimme gimme" was my slightly sozzled reply.  Despite the pub having been refurbished over a year ago now, the paint smell was in evidence and although my buddies commented on how nice the pub was, I couldn't help but feel it wasn't quite in the same league as the others today, though come here on a hot summer's day with the amazing views and location, and I bet it's a cracking outdoor drinking experience.  The music was notable in it's wonderful 80's shitness, so bad that it was good, I'd never even heard of Climie Fisher until today!

Back in Dewsbury, it wouldn't be right not to finish at the West Riding Refreshment Rooms - and anyone who had the misfortune to witness by "Periscope Debut" via Twitter will know I was rather drunk at the time!  When I get back up to 1,000 pubs, I'm going to do a "Top Twenty BRAPA Pubs so far" (unless Martin Taylor sues me as he has a famous top 100 feature) and it is fair to say the WRRR must have a great chance of making the final cut. 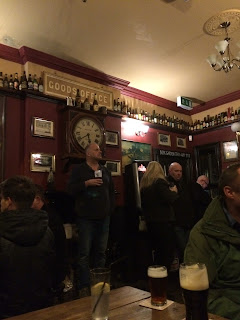 Me and Piper left AFTER Richard and Jason (a first for any work-based day or night out, anywhere ever) and after a dreadful KFC, I was in bed by 9pm!!  Superb day, and I'll see you all in South Yorkshire on Tuesday night for more outer Rotherham based fun beginning with a W.  And that's not a sentence you hear every day.