A Tuesday afternoon off work was made all the more exciting by a "yellow" snow warning (not that anyone likes yellow snow), especially as I was off into t'hills......

I hopped off the train at Greenfield, and walked what I was expecting to be a 40 minute uphill trek to Dobcross.  Amazingly, it was more like 20, and this was dodging crazy roadworks and fish & chip eating students in Uppermill, which was a lot more like a metropolis than the sleepy rural cobbled hamlet I'd drunkenly remembered, when I visited the GBG pub here in the summer.

The barmaid was a minx-like shoulder-less girl with the kind of gap in her teeth that would have got her drowned as a witch back in the day (yes, wrong part of Lancs I know) and my lazy "snow forecast" comment received the apathy it deserved.  She instead decided to focus on my coins being very cold.  I sat as far from the door as I could physically get in the warm lounge, surrounded by old duffers with their faces in the nosebag..  Entertainment followed in the form of a group from London, meeting some locals - "we've travelled three hours to get to this pub" said the posh outspoken woman, well I know that feeling luv, welcome to BRAPA.  She soon told a story about being stuck in the bath which was a bit of a toe-curler, and I wasn't the only person listening in who was sad that she'd escaped from it.  However, she later redeemed herself with quote of the day when scanning the food menu "I'd get the cheese and onion pie ..... if I liked cheese and onion".  The comedy timing was superb.  Her husband actually contemplated ordering it, but she warned him of the high calorie content.  It was time to leave.

I swung a sharpish left outside the pub and walked up Sugar Lane into the village proper.  And what a peaceful and picturesque looking place it was, the leaden sky suiting it a lot more than a bright summers day as chimneys billowed smoke in the distance..... 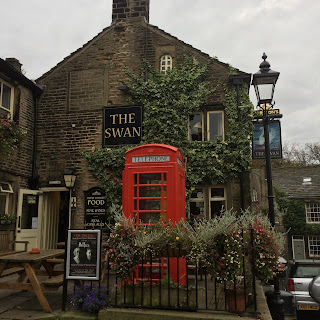 I nearly collided with a jolly waitress on the way in, which must have disorientated me as I then suffered that most awful affliction "bar blindness", and wandered into two side rooms before realising the bar had been behind me all along in the room I'd walked in to.  Not a good start!  The barman (who had an element of the "Fulham FC trainee" about him) was a good lad, but seemed hellbent on giving me a taster of this black cherry stout.  "Why?  It is awful?" is my new stock phrase in this situation as I almost resent the question but it didn't work on this occasion as he'd misheard me say I WANTED a taster, as if.  I saw a green leather armchair in front of a candlelit fireplace, and knew this was the right room to be in, and settled down with gentle swathes of Glenn Miller playing in the background.  I was so 'in the mood*', I had to pinch myself to remind myself that this was a Marston's pub.  I'd never have known if it hadn't been for the beer range.  I've been to some good ones (Upper Poppleton, Chester le Street etc) but this was the BEST yet.  Many are quite crummy.  A terrier yapped angrily and a distinct smell of stewed veg reminded me I'd chosen the seating area wisely.  My beer was superb, best ever in a Marston's pub?  And it was so warm and comfy, even a radiator behind me in the toilets warmed my arse whilst I pissed.  Wonderful pub experience.

*No it's not the only Glenn Miller song I know, but it's hard to effortlessly squeeze Chattanooga Choo Choo, Perfidia or Pennsylvania 65000 into a blog entry, okay?!


After a gentle-ish stroll back towards Greenfield along a canal I'd spied earlier (the schoolkids were now roaming Uppermill brandishing clipboards), it was warm enough to sit and have lunch as the trains weren't due for a bit.  I rang Dad to reassure him I'd not got stuck in the snow but he was enjoying his 3:24pm lunch so he rightly gave zero shits.


The train east was delayed so I took this as a sign that the BRAPA gods wanted me to delve deeper into Greater Manchester (Slaithwaite had been an option) so I took the also delayed train out to Stalybridge, feeling Ashton-Under-Lyne was just one stop too far.

I like Stalybridge, the folk seem very real if a bit odd at times.  Plus, it is always dark and/or I am drunk when I'm there.  Today, I was more sober than usual but it got very dark very quickly.  Four different groups of people stopped to watch me take this next photo, nosy bunch, I may as well have been a flasher (my flash wasn't on).

And the fun didn't stop outside, as once in, the barmaid subjected me to quite the examination which would soon have me hiding in the far corner.  The pint cost £2.61 - "give me the extra penny to save us extra change hassle" was her first demand.  Thank god I had it.  "You a CAMRA member (scum)?  Lemme see you card, yeh?" was next.  "You wanna try this beer, you'd better!" (I wasn't arguing this time),  "It's called 'ginger' but it is only a name, it doesn't taste of ginger, got it?"  Yes miss.  I was almost relieved when a smiley man next to me started talking about the forthcoming snow.  Being more polite than a Dobcross barmaid, I made conversation on these lines but he soon turned out to be more of a nutter than her - "Shotgun Mick" I later learned was his name, don't ask why.  Re the ginger ale, he told the barmaid she was ginger too.  "I'M NOT, I'M STRAWBERRY BLONDE!" she growled back.  But then he pointed to me and said I'd told him to say it!  She believed him too, and then whispered to me "you're just a visitor, you can take it!"  Cheers.  I left my coat n bag at the bar and went to the loo, but Shotgun Mick left immediately (amazingly not with my coat or bag) and with the barmaid still grinding her teeth, I slunk off to the far corner.  Where I stayed, in cosy proper pub comfort, for the rest of my time here.  She was definitely ginger.

Even closer to the station was my final 'tick' of the evening, the highlight of it really being that at one character, it is in the Guinness Book of Records for having the shortest pub name.  I commented on Twitter that Chorlton-cum-Hardy must be well pissed off at that, which went down well for it's well nigh impossible to be a pub blogger and be kind about that place .....

Bit of an odd one this.  I arrived to the beaming, and shining faces of old locals who all acknowledged me in front of this amazing roaring fire.  But no room on this side of the pub to even perch, so I had to go round to a posing table and face Stalybridge's answer to George Michael on his fifteenth pint of Guinness.  Before that though, I was served a strange Cumbrian Ale called "Bada Boom" by a miserable dimple chinned blonde, old enough to know better, but far too young to care.  Well, the first bit anyway.  The pub felt a bit like a cross between a German sauna for old men and one of those fake rural pubs "in the town" - not that it lacked character, it just didn't know what it wanted to be which is starting to become a theme for Hydes pubs.  A blackboard showed an amendment to the word "tomato", it was still wrong, suggesting two incorrect spellings of the word which seems barely possible.  They seemed hellbent on sticking an "e" in there somewhere!  A man then did something impossible and made ole'sour-face laugh - what had he said? "I'll have a pint of JD!"  Fucking hilarious.  Seriously, he was soon behind the bar grabbing some snacks/something he shouldn't, and she playfully commented on his rosy cheeks.  It was time to get the hell out of here.

And just as well because I was quickly meeting Twitter's favourite local pub expert Quosh for a quick half of Squawk Porter.  I think it was a Squawk I drank when I met Martin Taylor so maybe it has to be a Twitter rule.  (Sir Quinno was an Ascot ale, Tim Thomas a Kennet & Avon one, so it doesn't always follow).

It was a nice but brief meeting, most sober I've ever been in the wonderful Buffet Bar, and my delayed train then confused everybody by turning up 2 minutes early meaning I only drank a quarter of porter.

Train back went all very smoothly right through to York where the snow still didn't start til 11pm so I missed all the fun.

Attentions now turn to Leg IX of the Berkshire : Berking Mad Challenge.  I will be south south east of Reading this time out.  If all goes according to plan, I reckon I can finish Berks in Feb.  December (the main tricky trip) will be a 'mop up' of East Berks (Windsor, Sandhurst, Warfield and Moneyrow Green), Jan will see me finish Reading proper (3 pubs) plus St Nicholas Hurst, and Feb will be out west where I need to do Stockcross & Wickham.  Then it'll be party time.  Or Buckinghamshire.