A mad old lady had already refused to take my seat on the train "aah've been stood up all bluddy day luvvie!" by the time a group of wide-eyed ghouls hopped off in front of me at Kiveton Bridge station.  The worst offender was a swaying man with huge headphones.  Soon, behind me all I could hear was "LA LA LA, DUM DUM DUM, DEE DEE DEE" - it must have been a 12 minute instrumental, but he followed me almost all the way to Wales.  Freaks come out at night?  Correction, 'Freaks come out at BRAPA'.  With reassuring regularity.

I finally lost him only to encounter some crazed pot smoking teens on the corner of the road down to Wales, one of which was freaked out by "a crazy clown lurking in the shadows" near a disused petrol station.  I didn't witness this, but it allowed me distraction enough to get passed them.

The pub looked grand, and was in a suitably quiet village location .....

I'd conclude that a 2015 refurbishment of this ancient pub hasn't been particularly sympathetic, not that I knew what it was like before.  However, I can't imagine bookcase wallpaper, placemats and cutlery, magnolia colour scheme and those cheesy "funny quotes" on the walls featured in yesteryear.  In fact, I could have still been in the arse-end of East Berkshire, had it not been for four curmudgeonly old blokes knocking back pint after pint of keg Stones - and even they were reduced to a posing table, grudgingly concluding "Ched Evans is a decent footballer you have to admit".  The barmaid served me a Theakston Green Hop and a pretty lame half of the usually glorious Farmers Blonde, and though she looked impressed with my ability to produce exact change on each occasion, her lack of 'people' skills seemed at one with the majority of the sour faced clientele,  The main barmaid (landlady) seemed a right character so I was sad she didn't serve me.  I'd used my BRAPA honing device to locate the least foody room (and the nearest I could find to bench seating) but this contained both the (constantly revolving) kitchen door and the popular draughty door to the car park, suggesting drinkers are given short shrift here.  And all the while, I was eyed with that "S.Y. Village Suspicion" ala Harley and Mapplewell (though these were both highly traditional pubs).

So many highlights in my Tuesday night South Yorkshire adventures this year, but Wales fell short.  Fans of the Dog & Partridge in Yateley, Hants would approve.


The walk back to Kiveton Bridge took a lot longer when you weren't being followed by a humming nutter, though the super moon was still very full in the sky.  The journey back, with a lovely half of something in Sheffield Tap, was stress-free, and I'm still on course to finish South Yorkshire by the end of 2016.  And wouldn't that be a good achievement? 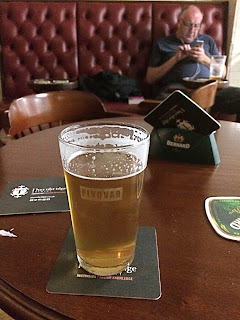 Saturday sees me finish off Sunderland's remaining two pubs, and make my real ale debut at Ivy House, my first visit there in 18 years!  And I'm only young, honest.