With a Friends of Ham catch-up night cancelled, I thought it wise to fill-in a rare drinking space in my diary with an easy BRAPA tick to keep me chugging along in this productive month of November.

The "Black Friday" pedestrians were limping home sour faced and empty handed to their Horsforth and Hornbeam Park hovels, and I managed to just keep my eyes open long enough to hop off at North Yorkshire's favourite snooty twee-fest town, Harrowgayte.

The pub was t'other (nice) side of town so after a (probably) needless walk around the backstreets, I saw my pub looming large across a busy main road, at which point I got excited, forgot about personal safety, and stopped the traffic with some questionable road crossing which Tom Irvin would have approved.

What kind of pub names itself simply as it's address?  One that thinks names like Red Lion and the Fox & Grapes are too common and passe. that's what!  So typically sneery Harrogate.  Imagine if York's Bluebell was called 53 Fossgate, if Stockport's Crown was called 154 Heaton Lane, Preston's Moorbrook was called 37 North Road ..... you get the picture, life would be just that tiny bit shitter wouldn't it?

So I entered with something of a negative mind set, and it says a lot that I'd warmed to the place even before I'd been served, and this was with a pregnant barmaid smiling hopefully as though she'd serve me any second without quite managing it (just like in Wath on Tuesday).  The look the pub was going for was dimly candlelit, middle class, middle age, warm and homely, a hint of pretension but nothing you couldn't suck up with a smile.  Speaking of which, don't venture into the "purple room" on the third floor or you may never be the same again.  The beer was healthy, and the punters, the most friendly I've known on this, my 7th trip to the town.  I fought may way through a series of posey couples leanings on posing tables ("look at me, look at me, I'm here, in public, enjoying myself!") to a backroom where surprise, surprise, there was a fair amount of bench seating available.  Three mature ladies were cackling and on the gin, their make-up done in a way which made them all look like fortune tellers.  Two "butch" men with two tiny greedy dogs were encouraging the ladies to get on the 'doubles'.  "We want some fun in the back room tonight!" they declared.  I refused to make eye contact, wanting to be a mere observer after a hideous working week.  However, it's when you are at your least sociable that some 'character' comes to sit next to you, and it did in the form of Christopher, an older chap with the air of a well-to-do Yorkshire playwright.  "Don't mind if I vape?" he said, "it's pretty inoffensive" as he practically sat on my left leg.  I couldn't be anti-social and told him I'd never understood vaping and it smelt of cloves, but this turned out to be pain relief for a tooth problem and soon I was chatting teeth and dentists, he had a wet finger which spent half the night in the back of his mouth.  But the chat progressed and he shared my views on Harrogate and York folk, the culture of North Yorkshire, he also used to work for Yorkshire Bank like me, and enjoyed the chat so got him on the BRAPA/Twitter mailing list (which doesn't really exist).  I left him to his tooth woes, in this quite interesting pub.

The less smart-arsed direct walk back to the station was unsurprisingly quicker, I suppose 10 Devonshire Place wasn't too different from Hales Bar, but with a slab of York's Guy Fawkes and a hint of Hull's Wm Hawkes thrown in.

Had time to pop in Harrogate Tap for a swift half of an Arbor beer called something about a tree, whilst I stood near a premature but not yet decorated tree ..... 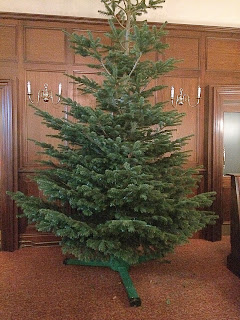 Better get a good night's sleep before we get cracking on West Yorkshire tomorrow!  I'll be back on Sunday for a review.  Sweet pubby dreams.