* Wickersley wins on the away "good club" rule.

The heaving 16:48 from L**ds to Rotherham should have been more than a two carriage train, as it couldn't fit everyone on despite the "move down the carriage!" pleas.  By Wakefield, we were ten minutes late and as a consequence, I had to catch a bus that dropped me on a busy main road between the two pubs, instead of just outside (bus driver was new and didn't have a clue).

When is a bus twild not a twild?  When the parents are twarents.  With a Dad (played by a chav Frank Spencer "oooh Betty it won't stop crying"), and Mum (an unmotivated Rose West), what chance did this poor little bastard have?  Horrific earring or not, at the age of about 4.  Only in outer Rotherham.

Both Whiston pubs were, in Halifax tradition, not where the GBG App pushpin stated .......

It was a seriously freezing evening and it must've been etched all over my face, for the old local who turned round said "cold enough for you out there, lad?!"  That was as "real" as the pub got in became quite a sterile experience, despite a wonderful pint of Moonshine.  Okay, so I located "the best seat in the house", in an armchair of relative comfort, between Christmas tree and tiny fake fire which was warming.  There were no beermats and I'd forgotten my emergency one!  The barmaid had "danger" written all over her (not literally, I don't think, well I don't know) but she was the type you'd want to elope with if you just sat there drinking and staring all night.  No time for that though today - I think the pub was incredibly proud (surprised?) of being in the Good Beer Guide as there were signs everywhere.  Another sign "we don't serve fast food, we serve good food fast!" kind of summed up it's limited charm.   To give the pub credit, the "foodie" area was very well hidden out to the right, to the extent where you could happily forget their meaningless existence.  A woman with a fat arse seemed to trying to feel heat from "my" fire, her boyfriend looked a dullard too, and the second I started buttoning my jacket to leave, she was STRAIGHT in my seat.  I even tried to make a joke out of it, but she wasn't the most quick witted creature, and that kinda summed up the pub.


I skidded around the corner onto the main drag and 10 minutes later, I found myself seeing not the name of the pub, but that most worrying of signs .... "Ember Inn!"

But after a bad experience in Redcar, I've learnt to cope by inventing "Ember Bingo".  And I ticked off the vast majority on my imaginary "card".  It was actually "above average" in that I got a great pint of something unusual (Bread & Butter by Vocation), there were no crumbs or food debris on floor or table, it was comfy, and the clientele didn't act like people who'd never been to a pub before.  I count that as 4 "fails".  But these are the things I did tick .....

So as you can imagine, I quite enjoyed the misery!

Despite the lateness of the hour, I was too near to Wickersley to ignore it, especially as alphabetically it was next on the list anyway, and I'm not sure I can face another visit to Rotherham this year.  A short bus ride (when it finally appeared), a swift left turn at a huge corner pub, past the cricket pitch, down a lane, and I was there. 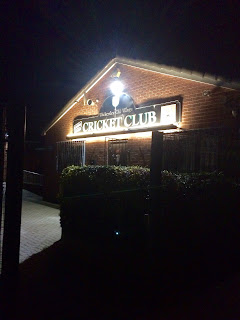 I'm always anxious pre-club in the GBG.  You just don't know what type of reception you are going to get.  The GBG tells you to show your CAMRA card or the book itself, but what is the truth.  I've categorised clubs into three levels of welcome.

1.  Relaxed - "stop waving your card and book around like a ponce, come in, settle down and have a pint and stop making an exhibition of yourself" (see Bolton Ukranian Social Club)
2.  Firm but Fair - "we'll welcome you with open arms but here's the rules - you have to engage with us fully, you have to show us your card, you have to sign the guest book, you have to leave a nice comment - then everyone's happy!" (see Hungerford Club)
3.  Danger Danger "we've told your sort you're not welcome here you CAMRA scum" (Penistone).

Luckily, this was about a 1.5 on the scale.  She did allude to be being a club member, but when I said I was in CAMRA, her eyes flickered in recognition of such an organisation and she didn't even want to see my card, simply warning me my beer wasn't quite as cheap as it would've been.  It would've been cruel to chuck me out, I'd already had to ask three burly smokers where the entrance door was - it was a bit ski lodge from the outside, proper sweeping loungey pub on the inside.  And she'd already had a chat with me on (what else), the freezing night.  "I've turned mi heating off and am not sure it was a good idea!" she declared ruefully.  I sat adjacent to a large TV but started itching and coming out in a rash when I noticed those two most obnoxious of football teams, L**ds and Liverpool.  A group of men watched, two sat and three stood behind forming a kind of tiered stand which amused me.  There was a young family in and the two daughters were displaying over excitable Twild like behaviour, but like on the bus, I let it slide as they were bored shitless as any 8 year old girl would be forced to watch Mum and Dad drink Fosters in a place like this.  Though I loved it.  On the way out, everyone said bye, even people I didn't even know were in here, lurking in corners.  My faith in the GBG club is restored - for now at least!

After the bus back to Rotherham "Interchange" (sorry but it's just a lame bus station not even attached to the railway station) I had 35 mins before a train to L**ds so time to revisit the Bridge. 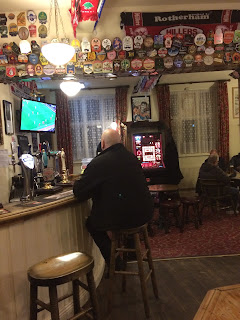 And what a pub this is as me and Tom discovered last December.  People talk about Cutlers and New York Tavern a lot, but this is perhaps the best of three crackers.  Barman asked how I was and where I'd been, called everyone "luv" (male and female), was a proper burly guy and when he heard Billy Sharp had missed a penalty for Sheffield Utd and they'd lost at home to Walsall, his reaction and language re the Blades was worth the admission price alone!  A man came in because his wife was caught short needing a wee.  A beautiful exchange followed between barman and hubbie.  Hubbie saying etiquette states you should always buy a half in such a situation, barman telling him as a guy with a weak bladder, he wouldn't dream of enforcing this rule.  But hubbie was adamant he should behave in the correct manner.   Then Liverpool scored twice and all was well with the world.  Only downside, perhaps the worst pint glass I've seen this year outside Scottish Stores.... 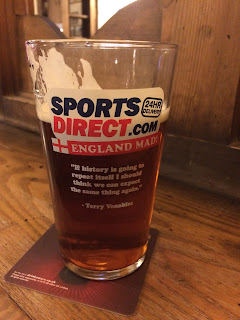 Back on the train, I half considered a "live" periscope update but didn't want the world to suffer anymore so just kept warm, got tea in L**ds, and was home 11:45pm.  Three down, two to go,