BRAPA - Morecambe and a bit of Lancaster

It was a nice trip down memory lane to be back in Morecambe with two friends, where we'd come for the Punk Festival pre 2006, after which it was moved to the brighter lights of Blackpool where it has been ever since.

Punk seems to fit better with Morecambe, and it was nice to see it's less flashy landmarks in tact, well apart from Blobbyland.  The Polo Tower, Rita's Cafe, the Midland Hotel, the warnings about cockle picking, and locals with those weary eyes, all still going strong.


But I think you all know the real reason I was here .... PUB TICKING.  So let's stop waffling and get down to business .....

After a harrowing train ride from L**ds and a 10 minute walk into the bowels of the town, we were dying for a drink and I have to admit, first signs were not too encouraging as it was one of those grand old street corner Lancashire buildings that barely looked open, never mind inviting.  There were two miserable old men slouched over tables, one of those situations where you have no idea if either of them work here, or are going to be arsed to serve you.  The slightly more agile one wheezed painfully, and crawled round to the bar like a pregnant sloth, where he served us New Forest ale, the only one of three handpumps on.  TV screens showing a torrential downpour in Grand Prix qualifying seemed to fit the mood of the pub.  Luckily, a brighter front room with superb pristine deep red bench seating and a high ceiling offered a much more positive experience, and encouraged a nervous looking trio to also come in for a drink, one woman kept looking at me as if looking for reassurance, as in "yes, it is okay to sit in this pub and have a drink!".  If you didn't know, this could have been a Sam Smith's pub, though it had Lancaster glasses and York Brewery beermats.  Very much a "War of the Roses sitting of the fence" pub.  A solid if unspectacular start.


Back towards the seafront, passing an old cinema and some settees stacked on top of each other, and we were hungry after the long journey, so it was Spoons time. 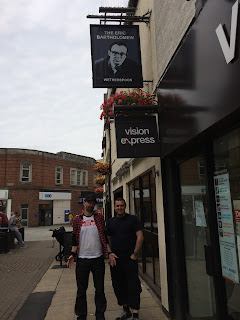 Downstairs was quite dull and drab as I used three Mudgie vouchers to save a whopping £1.50 on an already cheap round.  Luckily, the Top Dog Stout was nice stuff and the upstairs area was (a bit like the side room in the York), brighter, warmer and much more pleasant as we sat in a baking window seat, as the pub congratulated itself on being 10 years old with a board where you could add your comments about the pub - someone had written "Marching on Together" and drawn a penis next to it which was probably not pro-Leeds United but might have been.  My friend reported one of my pub pet hates next when he went down to order our food, people had formed an orderly single file queue!  In any pub, this is hard to fathom, but in a Morecambe Wetherspoons, well it can only have been tourists surely!  Glad I didn't witness it first hand.  I ordered ham, egg and chips, which was decent apart from the eggs seemed to be both overdone and underdone - something only 'Spoons seem to be able to manage.  I think Tandleman commented on his 95 year old Mum doing better eggs than 'Spoons, and this was the perfect example.  Still, it revived my increasingly limp stout!  Our peace was shattered as a horrific family of Scots descended on us, so many ginger Twilds, we were boxed in.  They weren't the worst behaved, but kids in Spoons is becoming a theme of July! 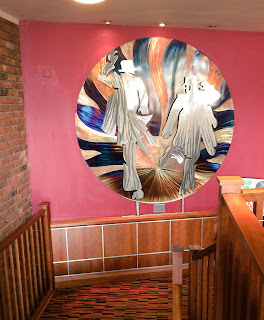 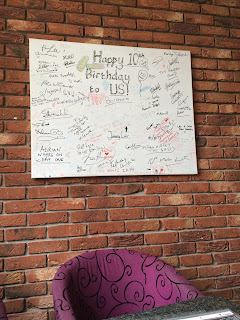 Onwards and onto the seafront, where I identified the Kings Arms as the pub I used to frequent most commonly - now it has some separate food kitchen built on (why?) called the King's Feast but next door was somewhere much better..... 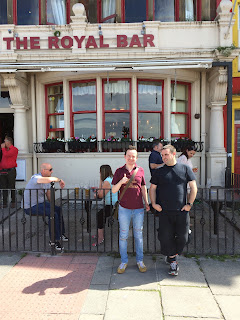 From the moment I stepped over the mosaic threshold and was smiled at by a cute squashy faced brunette, I knew this was going to be pub of the day.  A proper exciting range of ales meant we actually had decisions to make, and the friendly and jovial landlord looked like he'd been waiting all year for some visitors who were interested in more than just Carling Extra Cold, and he had a right long chat with me about various breweries, getting beers in, Cotswold Spring being ace, etc etc.  Quite an ornate interior too, though it did have that "seafront" pub feel, and live music was a feature you couldn't avoid.  I spied the nervous trio from The York pub, are they doing BRAPA too?  My ale, "Zesty" by "Dandy" started very zesty, but like most beers today, seemed to deteriorate but I'll give Morecambe the benefit of the doubt and say those eggs were sitting heavy on me.  I was cornered in the gents by two drunken scroats who saw my "British Real Ale Pub Adventure" t-shirt and asked me how I defined real ale.  As they seemed confused by the words "cask" and "handpulled", I snuck through a gap between handdryer and needle-addled arm to make a hasty retreat, before my corpse could be found in a toilet cubicle.  Still, if you are going to murdered in a Morecambe pub, I would certainly recommend this place for your resting location.


After a bit of "sight-seeing", it was time to leave Morecambe but mid afternoon meant we had couple to pick up a couple of Lancaster pubs.  This was good news for me because with eight listed in the GBG, I cannot do them all in one day and now means I can return for a proper Lancaster six pub day.

It was my first time in the town, and it seemed quite lovely, but are the pubs up to much was the bigger question?

My two travelling companions had enjoyed this pub back in 2005, having played pool in here, though 11 years on it felt like the kind of place you're more likely to find middle aged women drinking Prosecco than two blokes playing pool over a pint of Bomber.  Anyway, that isn't to say it wasn't enjoyable.  A bit like York's Lendal Cellars, it played on it's 17th century ancient wine cellars as much as was possible, but unlike that pub, this hasn't had it's character ripped out by Greene King and Jamie Oliver.  Another welcome range of ales meant I went with a Dunscar Blissful, served by a barmaid I'd describe as more efficient than friendly.  Again, I found it a hard going drink and really wasn't enjoying my ale today!  An old pervert then collared two blonde girls at the bar and declared that he had half a cucumber in his gin, before winking at them.  Certainly, the oddest moment of the day and they left very shortly after, looking confused and traumatised.  I found us a seat in a room generally reserved for diners but this table wasn't, and it was quiet, so you could really feel the atmosphere of the cellars.  Still, would have been better with pool tables in!  I then nearly got into trouble when discussing the Eric Morecambe photo poses, I said "mmm, behind" and looked up to see a shocked looking barmaid who thought I was talking about hers.  Time to go,

And we finished in a pub with an eerily quiet atmosphere, despite being bang in the town centre and claiming to have a huge selection of beers for everyone.  It also had adverts for a "Brew Dog Takeover" coming soon which to me at least, was perhaps a sign of caution.  It felt like the pub was winding down for last orders, with only one ale on, Hawkshead Windermere Pale - luckily one of my favourites, pint of the day but poor selection.   A few wannabe hipsters appeared with headbands, yoga pants, skinny jeans, spiced chai lattes and Jackson Pollock back tattoos.  They tried to look cool and important until they realised no-one cared, and they seeped back into the walls they'd materialised from.  Our group of 3 were knackered, but show my friend a pub bookcase and he can't resist.  After a bit of Lancaster GBG cross referencing, we played his favourite game "try and make a paragraph in a boring book sound like erotic literature". I tried, and failed.  A bit of excitement followed as the silence was broken by a fast walking blind man, who tapped his white stick on the floor as he sped to the bar, and had to be told off by his friends for making the loudest noise in the pub.  That opened the floodgates from hell, and in an instant the pub had got busy from nowhere, but everybody was twitchy and drinking Peroni.  My friend, in a moment of genius, compared this pub to a less good version of Loughborough's Organ Grinder, which was totally spot on.  You felt there was a weird undercurrent though and it didn't surprise me to learn from Preston's finest pub blogger, "See The Lizards", that this pub has some of the quirkiest and strange clientele.  Might have to nip back in for a half on my proper Lancaster visit.


After an equally painful journey back (I fell asleep but apparently the badly behaved men were all from Keighley), it was York Races so we decided against a swift half in York Tap and went straight home.

A good day as I get ever nearer that 1,000 landmark.  Lancashire moves up three places to 8th in the BRAPA league ahead of Tyne & Wear, South London and the West Midlands.

Next, I'll be finishing Sheffield on Thursday and am then in Nottingham on Saturday, where the number of pubs I will do depends on the City Ground's inability to get a safety certificate officer!