It was time to get back in Dad's car and tick off some of those remote pubs in that most difficult of counties (so far), North Yorkshire.

You might know that on recent car trips, we've been a bit annoyed by SatNav woman's constant chattering and heavy-handed, unhelpful directioning.  Dad revealed he'd found a setting called "minimum verbosity" to make our journey less annoying.  Interestingly though, you can only get this setting in a male voice.  Absolutely true.

After stocking up on Wensleydale cheese at the local creamery,  I was pleased to see the pub open and inviting at 10:55am and there was already a healthy gaggle of tourists queuing at the bar ordering coffee (spit!)    I scanned the beers on the blackboard and went for an "Admans" (a new brewery on me!)  The barmaid/landlady was a fantastic hardworking and jolly lady, I almost felt guilty she had to change the barrel (I only ordered it as a Theakstons protest) but it still tasted like Best Bitter.  Dad's coffee meanwhile was in the shallowest cup ever and was finished in two sips.  With the strains of piped Bangles Eternal Flame emanating from hidden speakers, our friendly host came over and declared "It's July, let's light the fire!"  It went up so quickly, we suspected they had some special Theakstons fuel.  This pub should also be noteworthy for having the most pathetic moose head ever seen on a pub wall.  On the way out, I got talking to a scary man from Blackpool (is there any other sort?) who was enjoying his pubby holiday because his wife was driving their camper van, but she'd made them set off at 5am from Lancaster to get here so he was still complaining. 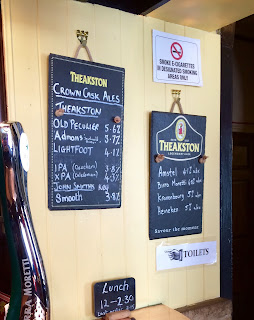 With the sun shining and the scenery spectacular even by Dales standards, we drove down a tight road through the valley to the lovely village of Thoralby where I had a hilarious joke planned (now on ice).  It was exactly 12 noon and the pub should be opening, and as we took the obligatory picture, Dad noticed a sign.  SHUT PUB ALERT!

Opening hours 12-2 and then 6:30-11 but it said due to another holiday, they'd not be opening for lunchtimes.  How does that work then?  They fly back from Magaluf at 6:30pm daily, open pub, leave again 11pm and fly back to Magaluf, repeat daily until holiday is over??

Despite the rain lashing it down by the time we reached Muker (where I had a wee in the outdoor toilets across the road, not realising I wasn't in part of the pub), this pub was the perfect tonic to the Thoralby disappointment.  Friendly barman with Buttertubs t-shirt on sold me 2 pints of Buttertubs ale in a Buttertubs glass which I put on a Buttertubs beermat.  It was the only guest ale, it was just as well, but it was much better than the Southwold.   Despite finding a hidden back corner of the pub, a huge group of idiot old walkers decided to sit right up against my back, despite having the whole pub to aim at.  Why?  Okay, so they had two lovely "HMV" dogs but it was no excuse.  Dad spied a hidden snug so we moved, they couldn't even take the hint from my AIDS beermat. This pub must be a rare example of where an extension has actually worked in it's favour.  Food seemed to be present, one of those dumb waiters kept making Macaroni Cheese (NOT Mac n Cheese I was pleased to note, flippin' Yanks!) appear from a magical hidden kitchen upstairs.  Piped Kate Rusby could be heard, very twee n Yorkshire ("ey up, I had an almond slice and a cuppa, then went for a walk in the bluebell wood before supper" you know the shizz).  Barman then proclaimed "Was that you I saw lurking in the roadside near Richmond with a camera?"  It was hard to know who he was addressing, and as it turned out, four people (including me) admitted the crime.  A sign said the toilet floors were wet due to the "humidity at this time of year".  Best wet toilet floor excuse ever?


Driving around the Dales today was quite quirky,  I'd seen a baby in a hedge earlier, now we saw a monkey hanging from a tree.  We arrived in Grinton without realising.

Having had the obligatory photo taken, I was vetting it a bit too closely whilst walking on the grass verge round the corner to the pub entrance.  Suddenly, I just went A over T and emerged from a ditch with blood pouring through a hole in my leg!  Best BRAPA pub entrance ever?  I think so.  Suddenly, things seemed to feel a bit more North Eastern/Cumbrian than North Yorkshire, and it wasn't just the Jennings sign on the pub.  It was quite a spectacular place, with a cosy wood panelled bar and a huge (more foody) lounge with leather upholstery.  The globe, tropical fish tank, and gramophone are the kind of features that give a pub that extra atmosphere, especially as the food orders seemed all to be processed by someone pushing a few buttons on a microwave (from what I could hear, am sure it was all fresh produce from some local farm, river, smokery or some nonsense).  In fact, had I stolen one of the HMV dogs from Muker, I could have used the gramophone to recreate the scene by shoving it's head through it.  Barman was very excited by a Marston's guest called Selador, nice but his "I can't wait to knock off to pull myself a pint of this!" was a bit OTT unless he was the village drunk in disguise.  He certainly was very chatty with Dad.  A fine pub this. 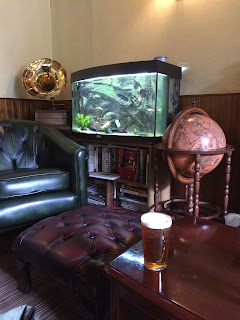 With Thoralby closed earlier, we decided to leave Bellerby (yet again) so it has a Dales companion on a future visit up here (something like Reeth might be back in by then aswell, who knows) so we headed north through Richmond to another one of those "how do you do it on public transport?" efforts.

They say luck evens itself out in the crazy world of pub ticking ('they' being 'me', just now) and we were kind of lucky here as we entered to be told by the youngest landlord in the history of BRAPA that he was closing at 3pm.  Uh-oh.  Well, this wasn't on Whatpub or in the GBG!  I asked if he would mind us having a half of the appropriately named "Should I Stay or Should I Go?" by Mithril (it was a bit tart and not entirely sure it was right) and he had no problem with us staying.  As the one local shuffled off, he chatted with us about the pub history and it turned out a lovely looking historic archway was a 1986 'add on' so you never can tell.  He also told us they'd tried to remove Black Sheep as a regular ale, but the locals boycotted the pub til they put in back on, but he puts a special cask on for two heavy drinking locals who usually manage to get through it in a day.  We didn't want to outstay our welcome, just relieved we'd got there before 3pm and been allowed to have a drink!

We popped into York's brilliant Fox (pub of the year?) for a swift half and discussion of future North Yorkshire tactics, I MUST be getting close the finishing this county now but it doesn't feel like it!

I'll be back on Tuesday for more Sheffield related fun, I might even hop on a supertram this time.