"Did you just talk to my dog?"  That was the first thing anybody said to me in Colburn, and he wasn't happy.  You know how it is, friendly dog trots ahead of owner, jumps up at you, you stroke it and say hello, owner catches up, knows you are a good egg, says hi, end of social situation.

Well not here in the fictional county of Richmondshire.  I'd already been mowed down by a shopmobility scooter in Darlington but it was going well otherwise.  I overtook a couple of  scroats down a narrow country lane, said an awkward hello, and reached my first pub soon after.

Having leant against a wall around the corner so as not to look impatient, I was delighted to hear that most perfect noise, an old pub door being unbolted, at 11:56am, 4 minutes early.  I nonchalantly ambled on in, to find the earlier scroats already at the bar (how??) ordering fruity Kopparberg bottles, with ice - exactly the kind of drink I'd expect from them.  As I got served a fantastic Richmond stout called Greyfriars from the no nonsense nice landlord, his dog started getting very excitable, desperate to go outside but not being allowed.  You might be familiar with the pub situation, where dog tries to manipulate the visitor with it's eyes into letting it out.  I made sure in no uncertain terms that whilst I wanted to find the beer garden, i wasn't letting him escape.  Sick of dogs already and not even midday!   Anyway, I succeeded and found a fantastic beer garden (the scroats had gone to the less superior front of the pub), the inside of the pub was half farmhousey, half modern.  I heard the landlord whistling and saying "come 'ere!", it was hard to know if he was talking to wife or dog.  Despite the fine weather,  it was very windy and some ancient trees were creaking like they were going to collapse on me so I couldn't totally relax.  Just as well.  Plenty to do! 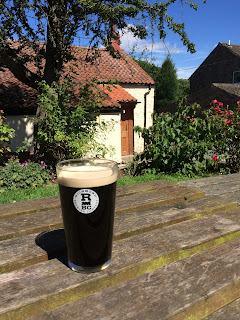 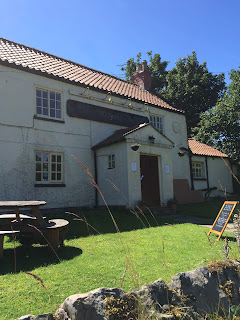 Google Maps then had a rare moment of added usefulness by letting me know my bus was 12 minutes late so I kept walking until I was well on the Colburn road back towards the "county town" of Richmond.  Hopped on a bus, and 10 minutes later was ready for pub two.

Richmond was, as I expected, one of those beautiful North North Yorkshire towns with castle, historic buildings galore so when I photographed the Wetherspoons, a man looked up as if to say "of ALL the tourist snaps, you chose to take this one?!"  He even looked up at the sign to see if I'd spotted a giant Pokemon or something. 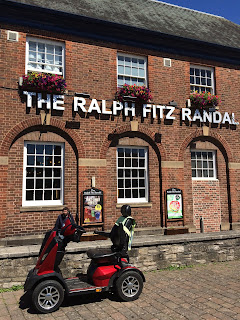 I entered to find that reassuring(?) 'Spoons smell of coffee and after the kind of tardy service you only really get in 'Spoons pubs, I was drinking a £1.55 pint of Wensleydale bitter with the help of a Curmudgeonly voucher.  A scary skinhead man was quizzing the staff on the lager, the barmaids showed their "knowledge" by recommending him a Devil's Backbone (which made me smile inwardly) but despite a pushy ' try before you buy' offer, he stuck to Heineken.  I decided to sit at the far end of the pub next to a "real" bookcase (how long before we get a real pub bookcase society?) on rare bench seating so I could observe the pub.  I'd only just "unpacked" my BRAPA 'kit' when a young couple returned from smoking outside to inform my they'd ordered food for this table.  I guess normal people would either have left something at the table, OR accept their error and ask the staff to change their table number.  But as I was learning, the people are not normal up here so with good grace, I moved seats, despite their kind offer to "join them for lunch" (well, the boyfriend said it, she hovered in the background looking scared and guilty).  This all meant I was sat too close to two tearaway 10 year old girls running amok.  Parental supervision?  Not a chance.  They did come up with quote of the day though, suddenly realising they hadn't seen Mum for ages.  "She's either having a fag outside, or she's gone to the toilet" reassured one, to which the other replied "Maybe she's having a fag IN the toilet!".  Absolute classic Wetherspoons experience. 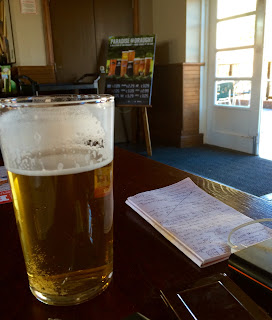 The two hourly bus to Gilling West (hard G, so the bus driver knew I was a tourist) wasn't far off so I stood and waited in the market place as the 29 became an X34, a 155 became nothing and sped off, and a 70 something turned up and became the 29 we all needed.  Phew!   To quote one teenager at the stop, "I'm sick of these busses mugging me off!  Lolz".

It was nice to be in a peaceful and secluded village after the hustle and bustle of Richmond, even if a main road did run through it.  As I arrived, two hooray henry's were leaving on bikes so I seemed to have timed it well.  However, stood at the bar were a middle aged couple twatting around with coffees and dessert menus with no awareness that I might (a) just want a pint and (b) want to be able to actually see the beers.  I despised these two a lot more the the Kopparberg chavs, so unsmiling and unfriendly.  Had they been tourists, I may have let them off but the fact they had north east accents made their behaviour doubly unacceptable.  However, I did have the last laugh as they went to sit outside on the road (hopefully literally), I found a secluded suntrap ancient courtyard garden which was superb, and my Old Nel(?) by Richmondshire brewery was as good as anything I had all day.  Frustrating then that an obviously historic old pub with slate flooring, a real fire etc etc should have gone to lengths to overly modernise.  I guess I find it a lot ("gotta do food in pubs in this day and age to survive, it's what they call progress you dinosaur!"), but had this been a wintry trip and I'd had to sit inside, I reckon I'd have been very underwhelmed.   I tried a hideous half of a keg beer called Theakstons Peculiar IPA which was wrong on so many levels, then the hooray henry's returned (at least they said 'what ho') so it was time for my bus.

It was hard to know where the bus would stop (there wasn't a stop) so when I saw the driver helping a frail old lady off it a few yards down, I had to leg it.  "Oooh good timing!" he said, but then stopped in a random place for another old lady a few yards past the pub,  They have their own rules in Gilling West. 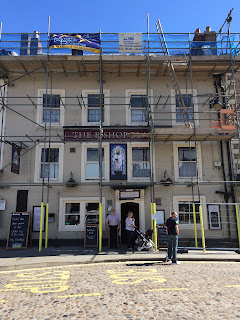 Shame about the scaffolding, but it did seem to suit this creaky old pub where you enter through a corridor, and everything seems very squashed and narrow and ancient.  A nice tonic after the last pub, and talking of nice tonics, Upham ale was on which I only thought they sold in rural West Berkshire, as I quickly glossed over that dream combination of Doom Bar and Sky Sports.  A harassed looking man arrived at the bar with a sense of urgency, then asked in a hushed embarrassed way if he could have a bucket of ice for the prosecco.  As I smirked and wondered what Martin Taylor would think, he added as an aside "because you know what demanding women are like!"  I passed through a rather drab games room, and found another courtyard, this time more shaded, with great views of the castle.  I sat facing the prosecco gang (he was right, the women were quite annoying) and one squealed when the ice bucket finally arrived.  I looked at the man expectantly, but giving her a slap was sadly not an option he'd considered. 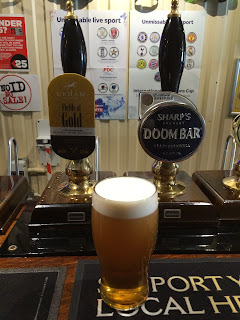 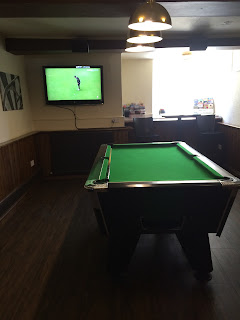 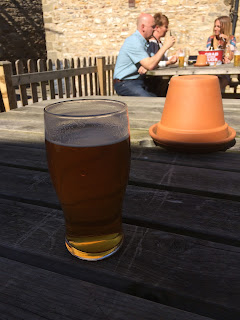 A bus took me back into Darlington and I had 2 hours til the train to York, so luckily I had pub ticking potential for the first time in County Durham since Feb 2015's Chester-le-Street extravaganza.

Sometimes you know a pub is going to be magnificent before you even get to the bar, and after a couple of flights of stairs, I entered a lounge where yet another crazy dog greeted me (can't remember his/her name!) and I was the only customer.  I got talking to the landlady Bernie about all aspects of pubbing (well once I'd bored her with BRAPA) and it was really interesting to talk to someone running a pub just for the love of it, the challenges of weeding out undesirable locals (as if anyone in Darlo is anything other than human kindness personified!),getting real ale introduced, introducing locals to each other to form a community feel, evil Marstons (poor Minster Inn), unwanted pool tables, unique jukebox selections, the list went on and before I knew it, I'd ditched other further out Darlo pub options in favour of a second pint before my train!  And I never do that.  You either get this pub straight away or you don't, I know a lot of people who'd be unimpressed (but I think you'd love it, reader), but the shabby (but not shabby chic) 80's style decor and layout is deliberate and increasingly rare.  This must be a candidate for the best pub in the land, surely!  When Hull City play at Darlington in a Blue Square North clash in 2025, I know which pub I'll be in.

Having fallen asleep on the train and nearly missed York (I was tired, okay!) I still had time to pop into York Tap for a 'swift half' but I was 10p short so they MADE me set up a tab I didn't really want.  Luckily, Tom Irvin's cameo appearance helped me realise I could just get a half, down it, settle up the tab, which sounds obvious now but at the time, I felt like a prisoner! 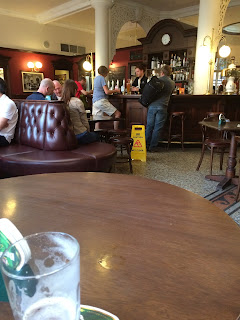 Still, a really good day and for the first time, I can exclusively reveal I am not that far from finishing North Yorkshire ticking.  Perhaps 2 more chauffeur days and 2 more train days.  Though the new GBG is bound to scupper all of that.

Giving myself a break from South Yorkshire this midweek, feel I need a sustained break from the ale, but I have a "special" blog in the pipeline about a slimmer GBG, and I'm in Morecambe next weekend with friends for pub ticking.