It was only whilst I was on the train from L**ds to Sheffield after work on Tuesday night that I realised The Wellington (one of my two planned for the night) doesn't open Mon or Tues.  Had I remembered back to to 8th December 2004, I'd had the same problem before a Hull City away match!

You've gotta adapt in this game, and soon I was waiting for a 95 bus after a hippy student girl had treated us to a hoopla demonstration with her two hoops.  Talented, flexible, but weird.  You wouldn't get this in Doncaster or Barnsley.  The bus driver looked at my PlusBus ticket like it was something alien, before accepting it, and the passengers were young and full of excited nervous tension as we climbed up the hill to Walkley. 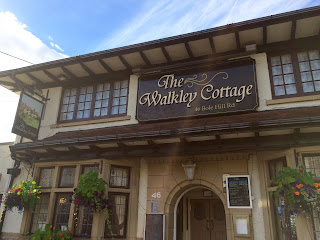 I suspected I'd been here before a different Sheff Wed v Hull City match but couldn't be sure.  22nd Sept 2007 would be the date, all I can remember is a friendly but dribbling very old man, lots of red furnishings, quite foody but quite traditonally estatey at the same time.  It was definitely the same place, as an elderly Jarvis Cocker greeted everyone who entered (apart from me), and the two chaps behind the bar were very friendly.  Such estate style pubs are great if you are a boy with a toy truck and no concept of grimy pub carpets, whilst ancient couples kept arriving to sit in "their places" as they probably have done for decades.  Glad I hid at the far end.  There was quite a bit of teatime eating going on, and Mr Mustard (aptly named) but so much squeezy English mustard on his burger, his plate was a sea of yellow.  As I started Tweeting about it, Mrs Mustard stared glaring at me from the far end in defence of her hubbie, either that or she was watching the news with a wonky eye.  He sucked up the burger in one, and when they got up to leave, he lingered because he wanted to see the weather forecast and shouted a load of abuse at Mrs M for leaving before him.  Lovely couple.

The best pub location for me, is hidden away down a side street or two, a little house like any other (like the Wellington in York, or the Garibaldi in St Albans).  Okay, this was on a corner but the cat sleeping on the pavement and jolly man saying "alright buddy" felt you'd gone to the most local Sheffield GBG entry yet.  It only got better as the first thing I heard was an old man telling the barman "I remember t'days when you couldn't get lager, it wor ale or nothing.  Fuck um."  Under the circs, with such colourful locals, I sat in a secluded snug near two students and admired the etched glass and mirrors.  To give you a brief history of the pub, a man called Dave Gilmour brewed beer and built the pub in the 1920's before he quit admirable pursuits and bored the world with Pink Floyd.  Or something.   A better pub blogger than me might tell you piped music isn't a good thing in a pub, but if it is, it's surely Johnny Cash, especially when it leads to an old man singalong.  Meanwhile, the local pervert was circling the pub saying "Good Evening!" to anyone under the age of 40 (the pub also having an equally fantastic back room with pool table).  Conversation turned to wine, from Bulgaria, leading to joke of the night "do they swear a lot in Vulgaria?"  If you thought that was bad, a man asked if chicken and chorizo were the same thing, his mate later asking if Bulgaria was in Argentina!  What??  I don't think these folk leave Sheffield much, but when you have this pub, why would you? 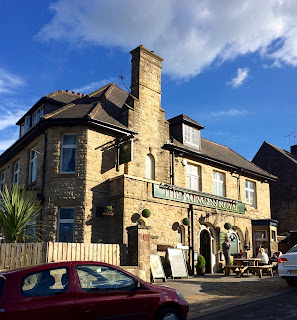 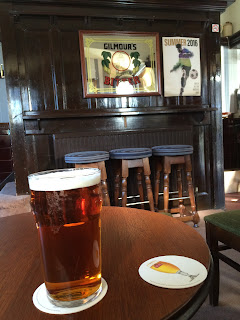 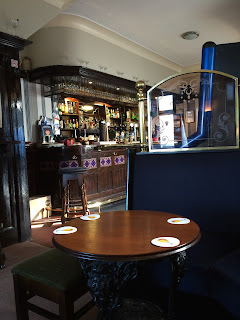 An even shorter walk took me here, and good job, I was bursting for the loo and had not been brave enough to ask in the last pub, it'd have caused some kind of scandal.  This too was a wonderful pub, a bit of a modern twist and a younger clientele and it was little surprise that the barman was a friendly little chap with a beard longer than his whole body.  Now this was the kind of pub where you could get lost trying to find the loo, and no one would bat an eyelid.  They were trying a bit hard perhaps on the 'sense of humour' element, and it was all a bit pricey with hilariously titled burgers, a Jarvis Cockerel burger on the menu, and more traditional bar 'grub' with the tag line "Do You Want Pies With That?"  Hmmm.  A 'gin garden' also filled me with dread, but it was impossible to dislike the pub, and piped Punk Rock was even better than piped J.Cash.  I'd asked for a pint of Barnsley Stout but when he looked confused, I realised it was 'Barney' Stout ....  amazing how your mind gets into that South Yorkshire zone innit?  If I was a student again, I'd be in here a lot!

I got a bus back into town (same bus driver, no queries over ticket this time!) but had 30 mins to kill and another weird student girl (Hoopla's sister?) jumped off at the Rutland Arms.  IT'S A SIGN, I thought.  When I complete my 1,000 pubs, I'll do a top 10 and this pub could well be in it.  Love it.  We both ordered half a Ella IPA (beer of the night), she sat with her scawny boyf, I didn't.


I'm now in an annoying position where I have 4 Sheffield pubs to do (one North, one Kelham Island, one West, one South).  I can't do Wellington on a Tuesday, so I'll have to think very strategically for next Tuesday.  For now, I've got Berkshire to plan on Saturday so see you then.  Better see what Wales are doing now.