Sheffield seemed to have been hit by a plague of elephants when I arrived in the city on Tuesday evening.  Not real ones, just model ones, painted all different colours, and randomly dotted around the city.  Hull did exactly the same thing a few years ago with toads.  But that made sense as it was a tribute to poet Philip Larkin who wrote about them.  So unless Jessica Ennis-Hill once had a relationship with an elephant at a Summer Olympics, this didn't.

Stop copying Hull, Sheffield.  It's embarrassing.  You aren't as good.  You are decent, but no more.  Stop it.  What's next, are you going to strip naked, paint yourselves green, and pretend to be grass?  There's only one "City of Culture 2017" and it sure isn't you.

And now I've lost my Sheffield readership, on with the pubs......

I almost did everything right at the bus stop on Furnival Gate, apart from forgetting to flag it down, so after another 20 minute wait, I was amongst the usual gaggle of students and old people on a bumpy bus climbing up a hilly road.  Luckily, the bus stop was right outside the pub. 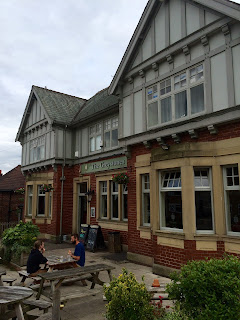 A friendly brunette with glasses and an "accent" (according to the locals, despite being from Sheffield) was there to serve me some very cold 'Brother Rabbit' by Thornbridge when I arrived - for this is the brewery's tap and I've always been a fan, but suspected a slight leaning to the modern and trendy.  A couple of young beardies (in above photo) were working their way through the full range.  With an old man staring at me in way that only 'Judgey Jesus' from London would (had he heard about the olives too?), I had no choice to sit in the main bar at one of the posing tables that dominated the pub,  What with extreme air conditioning, draughty doorway and cold beer, it was hard to feel 100% comfortable here.  The pub seems to double as a gig venue, with lots of posters and t-shirts on sale - I think they call "the back room" or something, because it is in a back room.  Original.  At least Fulford Arms "behind the white door" gig venue in York is no longer behind a white door.  A barman looked exhausted, having had to bring food to two different people hidden in corners of the pub, demanding half a pepsi off our friendly barmaid.  She had greater problems as a father & son duo walked in and the Dad went all embarrassing by chatting her up and telling her about his day.  She didn't care.  His son's decision to try and alleviate the embarrassment by discussing the range of nuts didn't help.


I decided to try something new to get to my second pub and booked an online taxi with a company called Uber and it was uber exciting!  With no busses between the pubs, and a 3.2 mile walk not viable options tonight, it had to be done.  Sadly, my free promo code didn't work but at £7.32 (strangely exact but good) and being able to see my driver on GPS getting closer was interesting,  and you get to rate the driver and they get to rate you.  How long til my review reads "pub bore".  Good chap was Mohammed, gave Ralph Hussain a run for his money.  Use code SIMONE1358UE for a free ride with them, and I get one too.

Advert over, acid test will be if Uber can get me to the Anchor Anchor for 50p from York.  I was at my next pub .... 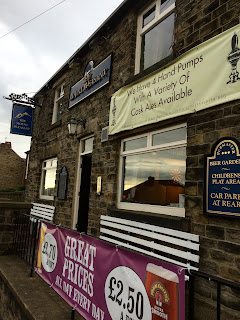 Bit of culture shock after all the modernness, I entered to the right door where I was greeted by the friendly locals (wow, not what I was expecting but superb).  Sadly, no ales in this side so I went to the left room where a small man on a mobile phone was scurrying around.  He turned out to be the landlord and broke off to give me the most nonchalant run down of the four ales ever, and then rang a bell to call "her from downstairs", a girl with glasses and severe fringe who looked like she normally was chained up in the basement, and blinked up nervously at the light.  What I most loved about this place is that it smelt like an old pub, not sure how to describe it, but it was reassuring.  Two old men sat next to me and started discussing what they were having for tea.  "Sausage and mash" said one, "but it is poor quality sausage."  Probed further (so to speak), he revealed he hated oven chips and when his friend told him you could get microwaveable ones in a box, he reacted like microwaves were far too much of a new fangled invention for him, and he'd never got used to his.  "I tried doing beans on toast in it once, it didn't work out well." But it was said totally deadpan.  I snorted into my ale though.  BRAPA comedy gold!!  They left, "see you later Mark" "errmm it's Michael actually!" I thought they were old friends, they didn't even know each others names.  Brilliant.

I had no time to relax, my busses were hourly and one was 10 minutes away so I swigged off my delicious Anglers Reward by Wold Top and dashed down the street, getting it quite comfortably.

I had time for a swift half in Sheffield Tap, not a brilliant place but nowhere near as bad as my Dad claims, I asked the barmaid if the Bristol Beer Factory Junga was pronounced with a hard J or like "Yunga" to which she looked at me like I was a fucking idiot.  But I still didn't get a proper answer.

This week, it made more sense to change at Leeds than go straight through to York and it wasn't such a bad journey back.

Just one more Sheffield trip left but with the Wellington not open Mon or Tue and me unable to do Wed or Thu next week, we'll have to think outer South Yorkshire again.  And thanks to Martin Taylor for pointing out that Penistone's Royal British Legion Club has been de-guided for not letting CAMRA members in.  Well deserved!