The traffic was terrible, the bus had zero air conditioning, and the level crossing was up/down/shake it all around, meaning getting to Whittlesey from Peterborough bus station in time for England's World Cup Quarter Final versus Sweden was by no means a formality.

I tried to be clever in getting a bus rather than a train, thinking it'd save me a decent walk from the railway station into the centre. But as it turned out, it was as broad as it was long.  And the omens are always bad when you see a wretched Sheffield United couple waiting with you.


I had no idea which of the three GBG listed Whittlesey pubs to watch the match in, so I thought I'd just walk and see which pub I bumped into first.  After all, I had to get all three done at some point this afternoon.

The first pub I came to was the Letter B, apparently called this because Whittlesey once had too many pubs, which makes zero sense unless there is a Letter A, and Letters C-Z, none of which are in the GBG if they exist.  I later thought I saw Letter P (a micropub) on the way back to the station but I think it was just a road sign and a patch of earth. 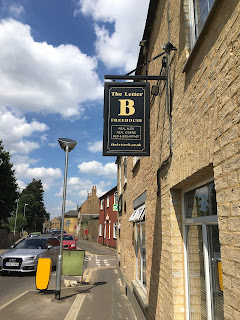 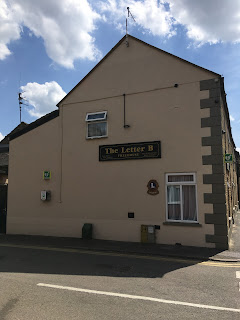 Key to maintaining your sanity in this pub ticking game is that you have to learn to roll with the punches.  When I pushed the door open, my biggest anxiety was seeing a heaving boisterous pub, three deep at the bar, stuffy, with no personal space or decent view of a screen.  So it was a surprise to find a cool dark, almost empty venue, with both screens switched off.  It was 2:40pm for heavens sake!  But I wasn't about to say "you putting the footie on, mate?"  If the landlord doesn't wanna put it on, he doesn't have to.  I might just have to neck this in 20 mins and move on (if I'm that desperate to watch England anyway!)  At the bar, in the gloom, I handed over £3.80 instead of £3.60.  Hardly earth shattering behaviour, but the landlord loved it, and the one local propped on the bar then asked if he could buy his pint with £1.50.  Jeeez, these folk were easily amused weren't they?  I turned around to see a nervous looking man with a t-shirt on bearing the slogan 'Troop Loops', which seemed to be a breakfast cereal for Storm Troopers from Star Wars.  Hmmm, niche.   He must've read my mood cos he whispers to me "is he not putting the football on then?" and I whispered back "I was thinking the same thing" and he was like "ummmmm".  But at that moment, probably about 10 minutes to kick off now, the landlord finds a light switch, AND then a remote control from underneath a pile of papers and puts it on!  Hurrah.  Troop Loops scarfed wife arrives, and two other couples.  A cool breeze was blowing in from the street, and I had a prime view of the match.  One of the other couples joined me, then their blonde friend turned up and the women told me they were only here for the wine.  I'd been chatting quite nicely with the blonde lady, it was a boring first half an hour, and when she said she'd wished she'd brought her book to read, I encouraged her to delve into my Good Beer Guide.  Then the magic was gone.  The ladies went outside to drink wine in the sun, Harry Maguire scored, I was the only one who jumped up with any real ferocity, but there were at least 12 punters in by now.   I chatted with the bloke, and he really hated Raheem Sterling.  Part of me wanted to go to a different pub for the second half, but there was something very compelling about the atmosphere of this understated gem and the ale was top notch, so with two mins to half time, I went back up for a Tim Taylor Boltmaker to "beat the rush" which was the best of the lot.  "I'll top that up for you if you take a swig of it mate!" said the barman in that occasional comment which never makes sense to me.  "Hahaha" replied that jolly local and his mate, "he's only doing it cos he's seen yer Good Beer Guide on the table!"  "I'm not a CAMRA spy .... probably" I joked, as I returned to my seat but fell down a step!  Smooth.  They brought us complimentary crisps, a nice touch.  England won quite easily, and as the final whistle sounded, two blokes ran to the jukebox next to me and screamed "WAHEY, THREE LIONS MUST BE ON HERE SOMEWHERE!" and soon, we were all having a sing song.  The bloke I'd been sat with asked me if I'd join him and the ladies in the beer garden, but alas, I had two more pubs to do so said it'd been a good experience, but I must away!

Further down the road on the other side, I came to a stern blue looking thing, but I had high hopes for it cos Martin Taylor had said it out loud once, and I really needed to crack on and try and spend just 30 mins in the next two (each, not combined, that'd break my rules). 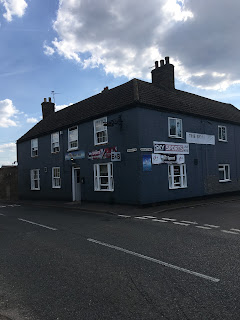 It looked a bit ominous, like if this was a film, you'd now hear thunder crashing, owls hooting and wolves howling, though to be fair, the sound of a howling creature is always less than 300 yards away in any Mid or North Cambridgeshire location.    The welcome thankfully was smiling, gentle and slightly inquisitive as the dregs (I mean customers) were just seeing off the errrm dregs of their drinks, as G.Lineker wrapped up the football coverage on a modern curved screen.  This seemed an even more intimate setting than the Letter B.  A very chatty dude started asking me about BRAPA & football, and though he was a pleasant chap, I was relieved when he left so I could prop against his stool as my legs were sapped of all energy.   I'd been kicking every ball.  The barman, a relaxed lovely bloke with an ultra dry sense of humour that makes a vintage landlord, seemed more proud of his whiskies than anything else, but was ruffled for a brief moment as tennis appeared on the TV.  He leapt out from behind the bar like a leopard on acid, and shouted "SORRY EVERYONE BUT TENNIS IS WHERE I DRAW THE LINE!"  By now, two blokes with Northern accents were chatting next to me about fishing hot spots in the local area.  I asked where they were from and they said 'Barnsley', one of the BEST answers they could have given because anyone who is anyone knows it is one of the best places in the UK.  They didn't take me seriously as a northerner until I admitted working in L**ds.  "You work in I.T. don't you?" they decided, TWICE, despite my banking claims.  They were down here fishing, having drained the lakes of Silkstone and Hood Green.  Now imagine if I'd said they looked more like newt collectors, they wouldn't have been happy.  My 30 mins plus was up, 'twas time to squeeze one more in before t'train.

Time for one more pub, but here is where the trail goes cold as I can't remember much about it, I'd like to say it was nothing to do with the ale. 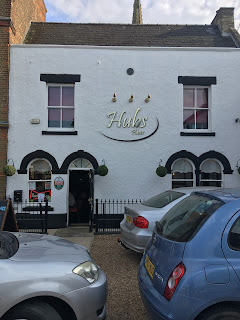 It looked a little bit naff (some of you may note the font and styling), and it felt a little bit namby pamby, friendly and all, just a little bit limp and lacking the character of the previous too, but like I said, the World Cup ales were taking their toll.  I often turn to the GBG description in times of need like this, so am not too surprised to read that this hole is the bastard twild of a local National Lottery winner.   Nicely done, the cream and red vibe made it feel like a middle aged ladies bordello serving tea and scones and massages rather than a boozer.  When mine, SeeTheLizards and Cooking Lager's lottery syndicate comes good, the pub we are opening will be very much the opposite to this.   A man at the bar seemed temporarily interested in BRAPA. "Which Peterborough pub were ya wanting then?" when I was bemoaning I'd not get it done today.  When I replied 'Coalheavers' he said "arrrrr very good" as though he wanted me to touch his robes and we'd be transported there through time and space (plot twist - he wasn't wearing robes).  Then, someone slagged of the Vine at Coates and told me not to bother, not for the first time today.  I tottered through to the 'World Cup viewing area' which was now a mass of chairs enclosing this pubbier room, and hurdled them in almost Evil Knievel fashion, rather than just move one.  I lost a few phone pictures, another drunk accident, so you'll have to imagine the other bits.  The Pride was drinking well, which is a nice positive to end on! 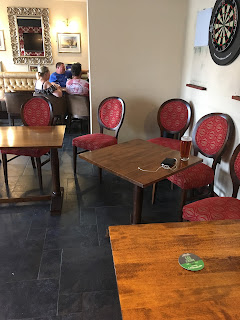 It had been a fun day, and attentions now turned to next Saturday and a trip down to London.