If you put a photo of a Bass pub at the top of your blog, you are going to get 1,000 'likes' off the codgery pub men aren't you?  That's how pub blogging works I'm sure. 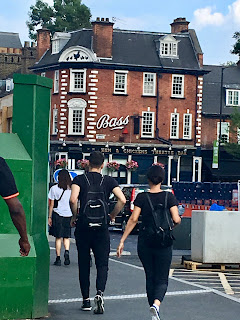 Hopefully it doesn't matter that I didn't go inside because it wasn't GBG listed, and went to a something more 'modern', you might say 'rubbish' instead.  But we'll get to that in a bit.

And if you follow it up with a picture of a cute pub cat you've nicked from a book cos you couldn't get it to sit near you in real life, your page views will surely double: 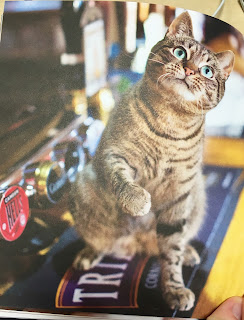 We left the Bell at about 12:30pm, and walked 15 minutes towards pub three.  But it was all a bit disconcerting because we started seeing things like 12th century churches, little parks, cute old fashioned bakeries and 'wildlife'.  You know, things that don't exist in the Walthamstow that Brian Harvey told me about in the mid 90's.  Though when he warbled "alright, alright, everything's gonna be alright" (Shakesperian in its tone), he obviously had a cat pub in his sights. 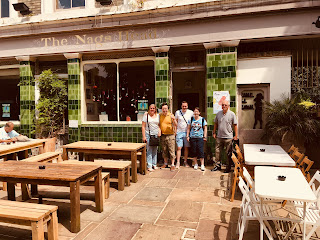 Green tiling, cats, a stringent 'no children' policy, what more could you want?  Good Beer?  Steady on, let's not expect to much too soon.  We wandered in, me slightly apprehensive because it wasn't in the GBG this year, but we were greeted by the jolly young barman wearing the type of waistcoat that makes northerners naturally suspicious of everyone from London.  As the others got the drinks in, I went in search of cats.  I think like a cat, so know where they might be so checked on the seats under all the tables, but no luck.  This pub had been described as feeling more like a village hall than a pub, and I could feel that airy, community 'vibe' as they'd probably say down here.  As we wandered awat from the bar, I asked "you do have cats don't you?" which sounded weird when I heard the words come out of my mouth, but he said yes, two, Billie & Herman.  Sy wanted to sit outside (he'd been rattling on about getting his vitamin D intake all day) and I was just arguing this went highly against the BRAPA grain, when Piper spotted one outside so I quickly backtracked.  If it was Billie, I missed the obvious Billie Piper joke, Billie was busy trying to skirt around a group of Twipsters, who were extending their long tattooed bearded arms in hope of a brief nonchalant stroke.  But Billie/Herman sat there, bossing the place, totally unruffled, back arched, a picture of serenity that your average London human could only marvel at, and all done with striking blue eyes.  As Sy and Mick presumably had more high brow discussions at the far end of the table, Shirl brought conversation down to BRAPA levels by saying she'd rather sit on a cucumber than a gearstick.  I think Piper and Jason were favouring gearstick, I was more concerned with the logisitics of such an operation.  Oh, and the beer was better than most pints we had today, and this was a pub surely destined for a GBG return. 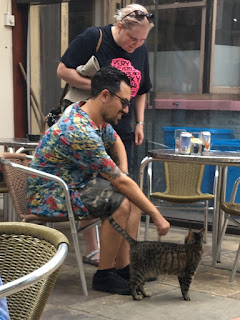 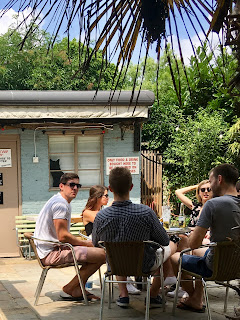 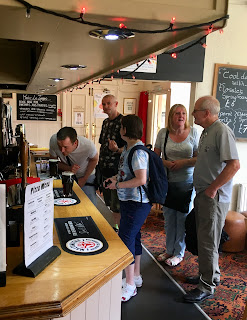 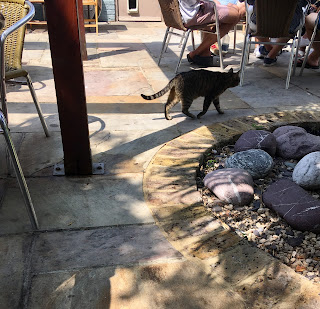 It was time to sort of retrace our steps in the general direction of the station, where we came to a pub so weirdly named, I'd told everyone it was bound to be a micropub.  But I couldn't have been more wrong. 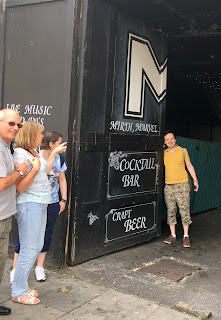 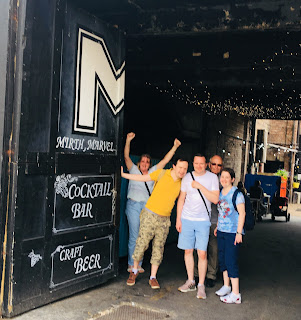 Pub of the day for many of us, this place was a revelation!  Like a huge old cinema (I think it is!) done out to the highest of standards, somewhere in between Winter Gardens in Blackpool and a Sam Smith's pub, and I assure you that is a compliment.  Mercifully cool on this increasingly hot afternoon, as we got served at the downstairs bar, I went to explore and found a stand alone cocktail bar serving no particular purpose, and behind it, I realised England were playing Belgium in a World Cup 3rd Placed Play Off game that only two people were watching, ten less than joined me in Whittlesey for the Q/F v Sweden.  What a difference a week makes, sort of!   We sat up top, and the gang were hungry by now, so ordered these £1.50 sausage rolls, described as "the best sausage rolls ever" by the assembled crowd.  It did lead to the only real flash point of the day, as Mick told Shirl he just wanted a bite of hers, then polished the whole thing off.  Fuming, she went back for another, but she wasn't alone.  My warm scotch egg was the subject of much derision, and something else was wrong, NO BEERMATS!  A rare oversight for this gem.  So that led me to hand out SIX emergency beermats, a BRAPA record.  AND I remembered to collect them at the end.  My beer from Upper Volta or Voldemort or something was very good.   England went two nil down, and no shits were given.  Time to move on.


Next we caught the tube back as far as Highbury & Islington, scene of that Bass pub above.  But my eyes were on something a lot more worrying ..... 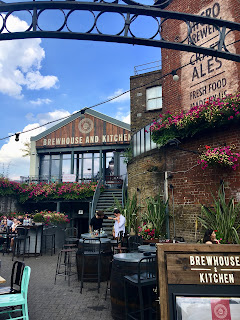 The omens were bad before we'd got inside, as me and Piper were attacked by a swarm of flying ants.  And once inside, even more irritating creatures buzzed around, in a rather chaotic scene at the bar where no staff member seemed to have a clue which customer needed serving next.  When I finally got in the chair, my efforts to pay by cash were met with confusion and disdain by the hapless barkeep, though as usual in this type of London pub, I enjoyed a pint of Romford Pele, named after former Hull City brief legend Ray Parlour, who I believe played for Arsenal.  I nearly went for the beer next to it, 'The Goal Scorer', as I've never had a Franny Jeffers themed beer before.  This pub actually is only open to Arsenal season ticket holders on matchdays, and judging by today's showing, they are doing away fans a favour.  Perhaps it explains the fact the Gooners manage to walk that tightrope of being infuriatingly smug, whilst thoroughly miserable, at all times.  In the grotty little beer garden (no vitamin D here for Sy), Jason smoked angrily, more flying ants attacked us, Piper caught a flying £20 note, and I slagged everything off like a talking version of my blog.  Still, I must've nearly been to all this chain's pubs now, surely!


Back on the Tube at Kings Cross, I had just enough time to show the gang one last pub.

I've been championing Scottish Stores hopes of a GBG debut for a few years now, but a recent tale of the pub upsetting both Southworth and Taylor clans for refusing to replace a mysteriously falling pint of beer for free is enough to leave me feeling rather concerned.

And despite good ales here in the past for me, both of the ones we ordered were pretty poor, well here's the 'proof'': 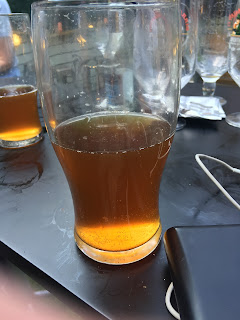 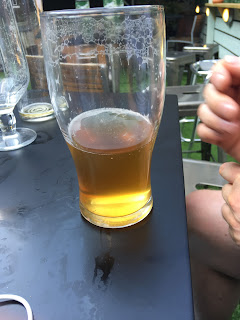 Still, we found a nice astroturfed roof terrace area showing something like Homes Under the Hammer rather than the end of the football, and save for some late 'knee touching', it was a nice way to end what had been a wonderful day out. 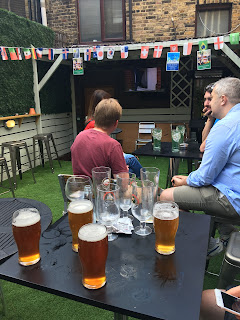 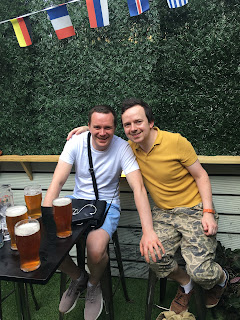 For our 'Winter' Heavy Woollen trip, I've been tasked with holding over some new West Yorkshire pubs from the new GBG, in an attempt to entice our former regular Richard Ellis back into the gang.