BRAPA - Conquering Cambs Part IV : "Only Greene King Can Save Me Now"

So, after what was an extremely positive daytime session in St Ives, the BRAPA agenda decreed that I must now stock up on fruit, veg, water and pasta meals, watch a bit of Homes Under the Hammer and then have a two hour nap in my flimsy Travelodge, replenishing myself for an evening pub crawl of Cambridge.

That was the theory, but I woke up with a splitting headache at 6pm and a 45 minute walk to the most northerly Cambridge GBG tick didn't really help and I felt like a Badgers Bumhole (is that a Penzance microbrewery?) but the time I reached the pub and took my photo, where two Vietnamese boat people (very lost along the canal) got in my way, not once, but twice.   I should add that this month, I've had more page views from Vietnam than anywhere apart from USA or UK so glad you get a mention lads n lasses of Hanoi and beyond. 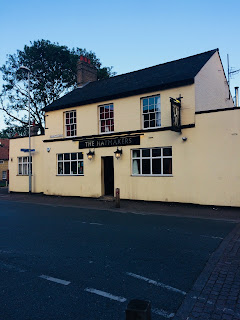 Milton pub number 4 of my life then, and you can add to the bingo card 'build their pubs for giants' and 'peach and cream colour scheme'.  Having a bad headache, a quiet early evening hubbub and a life-giving pint of top quality Milton in salubrious surroundings was what was required.  So obviously, the exact opposite happened.  As we say in BRAPA world, "no one puts Simey in the corner" but that was the only place to sit, by the gents bogs, next to dusty old shopping baskets, traffic cones and other things students had pilfered over the years.  I didn't actually see a traffic cone, it is 2018, and probably seen as dangerous rather than amusing these days.  But why exactly was it so busy with students?  It was like University Challenge pre-season training.  Had they not got homes to go to?  There's none left in York or L**ds I can tell you!  But not only students, this was a who's who of top Cambs twat life.  Cyclists, Joggers and Lecturers all milled about like bad smells, like the bad smells wafting from the gents every time an incontinent student evacuated their bowels which seemed far too regular for your average pub session.  I felt thoroughly miserable.  I'd even tried to be clever and drink a Welbeck Abbey beer rather than a Milton one because (a) they are better and (b) they are better, but this was limp, slightly warm and like a wine drinking student girl opposite, full of demure intrigue at first, but a total mess two thirds of the way in. 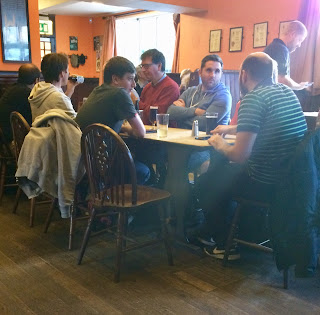 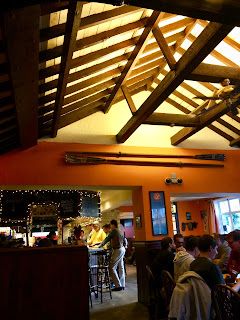 My mood was properly black now as I retraced my steps back towards the centre of Cambridge, though I actually have no idea where the actual centre is!   Who could save me now?


As the light started to fade, my next nearest pub appeared on a street corner, and I remember thinking this next pub just has to be good, it has to be!  So was it?  Let us see ...... 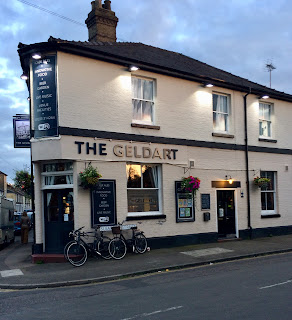 A pub trying just a little bit too hard to be cool and quirky was my abiding impression here.  It had a Gramophone sat there doing nothing, it had a skeleton playing a piano, the gents were marked by a picture of Elvis being a poser rather a simple sign saying "Gents", a food menu including the likes of horse, crocodile, zebra and kangaroo served on 'hot rocks' (whatever that means!)   and a side room with no one in apart from a middle aged couple playing a never ending Irish reel on fiddles doing absolutely nothing for my headache or the pub in general seeing as no one else could really see or hear them.  Perhaps they were just enjoying themselves?  How dare they?  My barmaid had nice lips but little personality, and perhaps it should've acted as a warning sign to me when an animated Spanish man was talking in broken English about his pint of Guinness.  Was he unhappy with it?  I didn't pay enough attention, thinking that if you order Guinness in England, you get what you deserve cos it always tastes like cold soil anyway.  But a sip of my Salopian Lemon Dream (a solid choice I thought) told me this was on the turn.  Hazy and sulphury.  Such was my lack of faith in the barmaid who served me, I waited for her to leave the room and asked the blonde one who sounded American but only from a distance, who I'd earlier seen handling two young men (ooh err) expertly.  She agreed it was fucking shite (not a direct quote, she actually said 'hmmm, might be a bit cloudy') and changed it for something unknown but drinkable.  I sat in a corner and drank my pint very slowly alongside a bottle of water, took me 70 mins to drink it all!  And about 5 toilet trips!  The pub dimmed the lights, and those dotted around the room actually went "oooooooh" which to me, is like applauding when a plane lands.  Embarrassing.  I was sat near two lecturers, right pseuds, one scowled at me, but couldn't he see my suffering?  "Imagine what Joe Public would say ...."  "(That stage in your life when one has a) fellowship" and "There's a book you might like called 'The Trouble With Physics'" were the types of things that escaped their lips as the light started to fade. 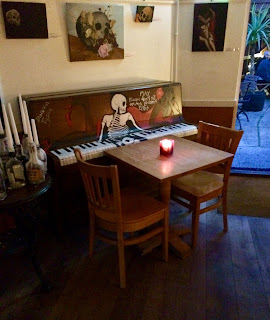 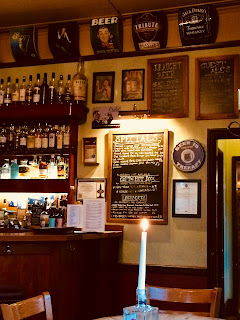 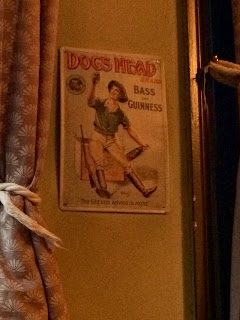 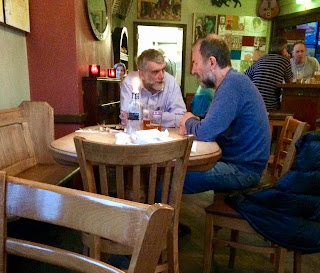 I think it is only fair to say that had I felt 100% well and these had been amongst the first two pubs of my fortnightly holiday, I may have formed a more favourable impression of them, particularly the Haymakers, but the circumstances in which you visit a pub make all the difference!

Time to squeeze a last one in before closing time, for it was now somehow gone 10pm.  I found it tucked down an unlikely looking side street.  There were your typical Cambridge folk outside, unlocking bikes and mouth-breathing into the night sky that they were meeting Gerald for a soy chai tomorrow morning. 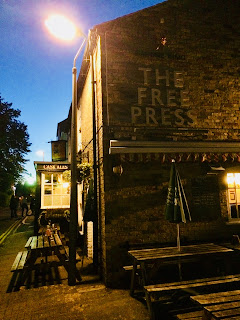 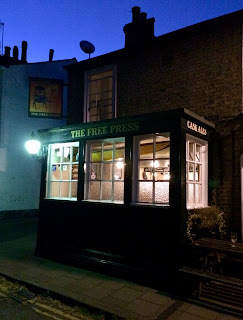 This was more the pace of pub I'd been craving this evening, small, old and traditional.  And to my surprise, three old blokes at the bar speaking in a Fenland tongue that was hard to decipher.  I'd actually spotted in advance that this is one of the few pubs to serve Greene King Mild, which was just as well cos typically of Fen men, they were bar blockers of the highest order, spreading out their webbed feet and fins and amphibious faces across the bar so I couldn't see the pumps.  The barmaid was a class act from the start who liked to remind people that she was a "fine art student" but enjoyed working in pubs because the people were so interesting!  Loved her.   She spied the bar blocking situation impeding me so indicated a blackboard, which confirmed the Mild was on, and by gum, it was such a nice drink.  Headache gone in an instant!  Greene King saving my life, what HAD this holiday become?   "Oiiiii've been watchin' tha' Furrrrrst Dates programme!" exclaimed one of the Fenlanders in one of the things I definitely didn't expect them to say.  "How many gay foreigners are there on thaaaaarrr?" he asked the barmaid before apologising for going off at a tangent.  "I've worked in pubs for 5 years and I've heard some shit!" she replied.  I edged past them and sat in this delightful little snug, which took me back to that side room of the Blue Anchor in Helston, and I can't pay it much more of a compliment than that.  I made the odd trip to the outdoor loo (another sign of pub quality) which had lots of articles about it being a no-smoking pub before it became mandatory.  And that was that, as the 'last orders' and 'time at the bar' bells sounded in literally two minutes of each other, though a male staff member appeared and did a little dance with a chip & pin machine in front of my eyes so I laughed politely.  I'd recommend this pub. 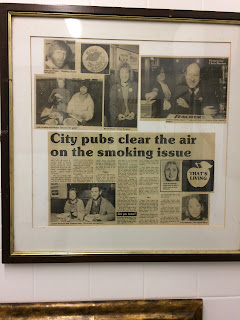 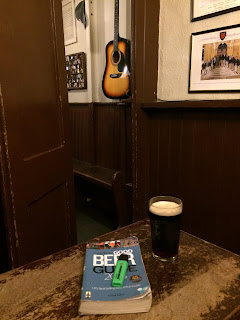 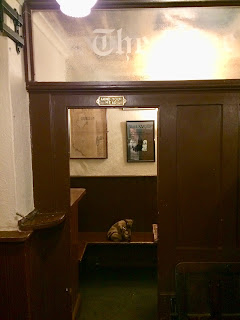 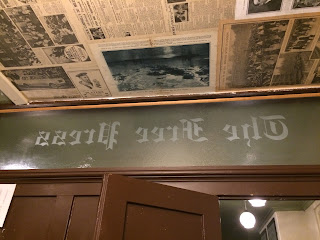 So what a bizarre evening.  In football terms, it was the equivalent of being totally outplayed and 2-0 down right up to injury time, and then scoring two out of nothing to secure a valuable away point.

Only one day left of my pubby holiday (thank Christ) and if Greene King / Jesus saved me tonight, maybe Martin & Christine Taylor could save me tomorrow?  For more on that, tune in Wednesday folks!