9:01am last Saturday and the Draughtsman in Doncaster station, that most impressive of pre-emptive pub ticks, was enticing me and Dad inside already.  It was going to be a long day!  Ben joined us shortly after for a 'swift half', whilst Tom was seen wandering on the far platform like a ginger Sasquatch.

On the busy train to Cleethorpes, we finally bumped into Tom properly.  He was swigging off a carton of tomato juice, as he's the finest exponent of anti-oxidants in BRAPA history.  It was a cleansing slimming juice of zero sugars, and that is a fact, especially if his Mum & Dad are reading. 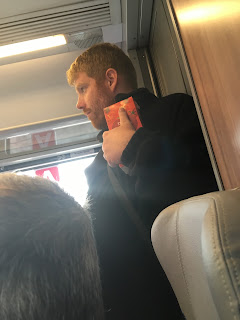 Off the train in Cleethorpes then and the kind of welcome I presumably deserve when landing in any foreign Lincolnshire town, and England doesn't get much more foreign than Lincs. 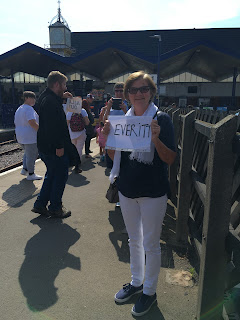 Yes, today was what we call the 'Summer Welly Day Out' where our Hull City friends who used to drink pre-match in the one time best pub in England, now defunct, the Wellington in Hull, get together to recapture the golden days of 2005-10.

Christine and Colin were here for rare BRAPA appearances, but sadly Tom's parents were unavailable (renal stone x1), as was Lizzy who had moved house from Macclesfield to Chorlton and was presumably entering a period of pub mourning in a black veil, blinking up at an old photo of Waters Green Tavern whilst the Cribs play soulfully in the background.

It suddenly dawned on me that I'd not thought at all about today's trip at all, in terms of pubs, planning, all the usual things I do in advance.  "You mean you were happy to leave the day in my control?" enquired Tom hopefully, but I knew Christine would stop him doing anything ridiculous.

In-keeping with good BRAPA practice, the furthest away pub was tackled first, and we hopped aboard a land train called "Lollipop Trains" and I was upset NOT to be offered a lollipop.  Not twild-like enough I presume.  All SIX of us squashed into a tiny carriage to take us half way there.   It was like clowns getting in a mini.

A sign told us the record number of waves from passers by was 102, me & Tom were on the 'waving' side but got our tactics wrong.  Tom just kept chanting 'Allam Out!' to non-plussed passers by who probably don't care about Hull City, and after three people ignored me, I resorted to shouting "Gizza wave ya dickheads!" and we ended the journey with a grand total of zero waves.

We walked through this weird tiny station, to find the first pub of the day, the "smallest pub on the planet" 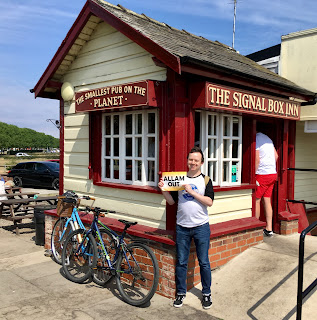 'Twas a bit like clowns getting into a mini (can you see a theme developing today?) as we edged in one-by-one, and a lady who I'm sure has served me in at least 25% of my BRAPA pubs (she looked so familiar) sold us pale delights, but then the more exuberant landlord appeared.  He seemed to have gone to the 'Platform 3 Claygate' school of how to be chirpy in a tiny pub, and was soon regaling us with stories of old steely loco drivers reeling off geeky details of the signal box of old.  A tale that seemed to impress Tom more than a claustrophobic looking Dad, as I nodded along sagely like I was taking it all in, but I'd noticed a mini pool table and football table on the ceiling, which I own both of.  Before we vacated for 'other customers' (how dare they?), the landlord had time to rattle off a convenient tale which seemed to emphasise this pubs place as the country's smallest.  It goes like this.  The owner of the former Guinness world record holding small pub walked in, says "hang on", gets his phone out, and rings someone (presumably the ghost of Norris McWhirter) and says something along the lines of "hold the front page Norris, we ain't the smallest any more".  What I liked about this place was the properly done outdoors drinking area, not like most in this category where you have to take your chances spilling onto a street or under a flimsy gazebo erected two seconds before, plus the ale was good despite the polycarbonate drinking vessel.  Ok, so the Brewers Fayre across the road was looking like a tempting pre-emptive, but I resisted, and the others found out that the tree shading us was a curly willow, well who knew?  Or cared?   With Tom threatening to 'fluke a 150', it was time to move on.  A promising start to the day.

We then had a good 20-25 minute trek back into 'Cleethorpes proper' and what a nice seaside resort it seemed, when you compare it to Blackpool, a bit like a happy Morecambe.

We took in all the culture, the famous statue of a boy with a leaky boot and the Princess Diana memorial garden, as she loved nothing better than a trip to Cleethorpes to go on the 2p machines back in her prime. 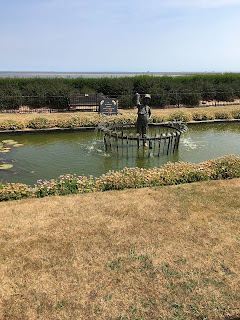 It was time for pub two, and pub AND a brewery.  How incredibly exciting.

So how could a pub with hidden Bass and quarry tiled floors still manage to rubbish?  That was the conundrum I took away from here, but we've all been to crap seafront pubs, whether it is the King George in Whitley Bay, the Marine Bar in Bridlington, or nearly everything in Southend.  The GBG seems to like putting 'brew pubs' in the GBG, regardless of what the 'brew' tastes like, or any other factors, something I've seen a fair bit in Cornwall what with the likes of the Crown in Penzance and that Trevaunance Cove thing.  As Christine stepped up to ask for a 'try before you buy' , the attitude of the two young barmaids seemed less than forthcoming, and whilst I couldn't really fault my pint of Willy's Bitter, it did taste like it had come from a sewage pipe facing the ocean, just a very nice sewage pipe.  Then the moment to make the oldguards dicky tickers skip a beat, as Tom pointed out a hidden Bass pump, near the back of the pub, not with the other handpumps, but with keg ciders and lagers, and set slightly back from the others.  This just adds to this famous ales mystique, does this pub have a staunch band of pub men who jealously guard it and don't want tourist scum touching it?  It was almost New Inn at Tywardreath levels of Bass mystique!   The pub itself had the persona of a middle aged man suffering a very awkward mid life crisis, and only some top Hull City quizzing from Dad & Ben could help us temporarily depart from the grim reality. 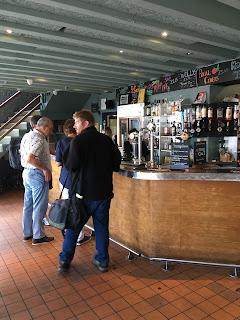 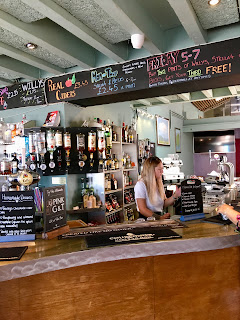 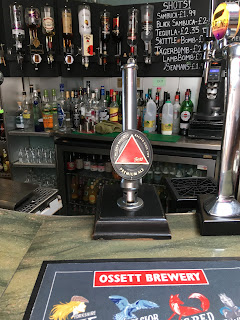 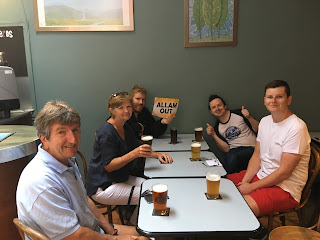 It was time for a timely pick-me-up, and next on the agenda was a pub that even Cleethorpes staunchest critics have admitted to me in quiet moments is 'a good pub'. 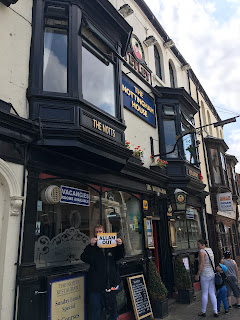 "TURN LEFT EVERYONE!" ordered Christine on arrival, as the others threatened to go off piste like some naughty biology schoolkids of yore.  Good someone was observing the 'BRAPA choice of rooms rule', and she explains the left is a bar room and the right is the lounge.  Both were stunning here in the Notts, which was living up to its billing immediately.  It was my round, and the poor rather hapless barmaid told me her colleagues had all disappeared, and a couple of the pumps were new and sticking, which led to one of the longest, most pain-staking drink buying sessions of my 'illustrious' pub ticking career.  I even apologised, quite unnecessarily, to a grizzly old bloke who'd arrived just after me and probably just wanted a pint of Carling, but had to wait patiently, as I'm the one normally in their position.   We retired to the lounge area, and Christine took the opportunity to ask the bar if she could leave some copies of 'Iron-Brew', the Scunthorpe CAMRA mag for which she writes, and they accepted nicely (it'd never have happened in Willy's) which was even nicer because it is a unique publication as only 14 people in North East Lincs can read & write, and that is a BRAPA fact, though many others have learnt how to chew crayons since I first visited.  Intense conversation surrounded our next pub, and it caused a split within the group, as me and Tom were the only ones willing to cross the border into Grimsby.  More on that in part two, and the other pubs we did last Saturday.  A great pub the Notts, a must visit if you ever wander into Cleethorpes by accident, which you won't. 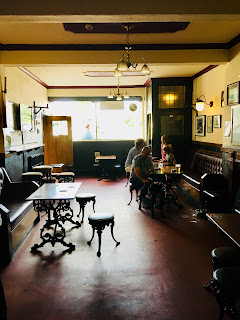 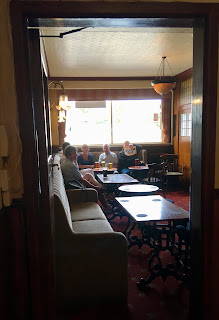 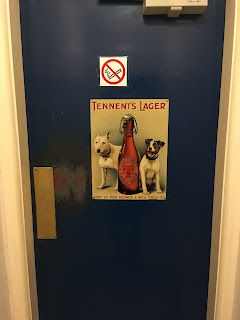