After a successful trip to Chorley last Christmas, pub blogger extraordinaire Martin "RM" Taylor told me "if you enjoyed Chorley, you might also like to try St Helens", like he was some beery Amazon recommendations feature at the bottom of my page.

So, with a high sense of anticipation, me and Father BRAPA stepped into the town made famous by the Lancashire Hotpots when they were the coolest band in the world for all of two minutes.  The GBG lists it under Merseyside, just to annoy everyone.

We'd made good time, and with a distant Tom Irvin hovering on a nearby train and directing operations like a bearded ginger puppet master, we followed his advice and squeezed in a pub before our 'difficult village bus tick'.

It wasn't far from the bus station and had opened at 10am like all good pubs should. 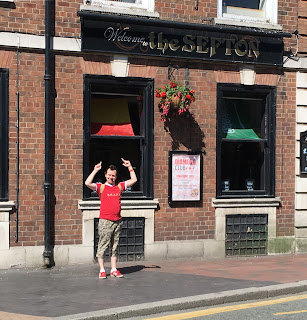 And this was exactly the type of cheap and cheerful boozer I seem to enjoy the older I get.  Flashing fruit machines, World Cup flags everywhere, drink & food offers, nothing pretentious, just totally at ease with itself.  The barmaid immediately asks if I'm a Twamra chap, as I'm excitedly eyeing up a range of George Wright beers, which no one had obviously done in here before, and she gave my card a proper good scrutinise, squinting at my signature on the back as though she'd know if I was a fraudster.  Nearly every St Helens pub today would ask the same question, but when I asked if I needed to show my card, their attitude was more "hahaha, no, AS IF anyone would actually LIE about being in CAMRA!"  So I admired this pubs diligence.   We took our pints (very good quality I may add) to a raised area where an old man was trying desperately to be a parody of a St Helens man, with his flat cap, stick, yet slightly bohemian air making me think he was a 25 year old disguised as an 80 year old.  He sat under the Senegal flag, like he was clinging to their now extinct World Cup hopes.   Dad seemed suddenly obsessed with the town of Market Harborough (wherever that is!), is this a symptom of being in St Helens?  Tom arrived, looking slimmer and weller than I'd seen him for a while, which I'm not just saying because his parents use this blog to spy on him.  He may have even taken an apple from his bag and started munching on it, before helping a little blind lady across the road and rescuing a kitten from a tree.  In reality, he told us about a dream he'd had involving Teresa May and Chris Grayling, and then kept saying 'scrota'.  So it was time to leave. 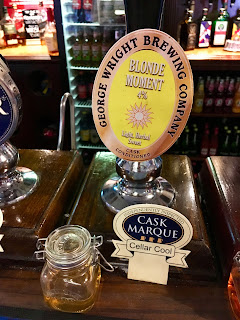 After some debate about where to get the bus from, Tom said 'bus station' which made some kind of sense at the time, but for the second time in BRAPA history, I was faced with oncoming brass banders.  This was the cheap n cheerful Saints version (am seeing a theme devloping here) with shit kids and colourful people on stilts.  The good folk of Delph/Saddleworth would be turning in their graves.

The DELAYED bus journey didn't take long, but soon got surprisingly rural, and a really nice location, place name and pub name greeted us as we arrived outside at 11:59am, poised for 12 noon opening. 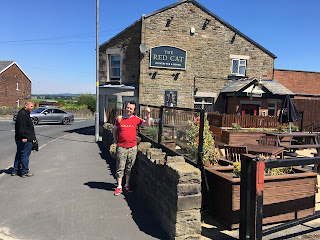 And at exactly 12 NOON, the blonde bar stewardess opened the door and got the shock of her life to see us three perched on her doorstep, something I guess they probably aren't used to up here, though we were by no means the only customers by the time we left.  She was a friendly lady, though I never felt quite fully engaged.  BRAPA came into conversation (as it so often 'just happens' to do) and when I mentioned the Good Beer Guide, she said "oh, we're in that are we?" which didn't seem a good sign.  I then said "I'm no beer expert, I prefer pubs!" and Dad shot me a sideways glance like "Whatever Siiiii" but IT IS TRUE.  It proved prophetic anyway because despite her obvious attempts to 'helpfully point us in the direction' of the Proper Job, I insisted on Marstons dreadful World Cup beer, Fever Pitch, which I was giving a second chance after a poor pint in L**ds.  It was vinegar by the end, and I didn't feel I could take it back cos I'd virtually admitted I knew nothing about beer.   Tom accused Dad of 'being like his Mother' when Dad tried, due to the ongoing hot weather, to get Tom to dispense with his fleecey 'Monkey World' jacket!    Quite a cute little pub, with a corridor, some nice windows and the odd side room, but not an experience that's going to live long in the memory when you compare it to what St Helens has to offer. 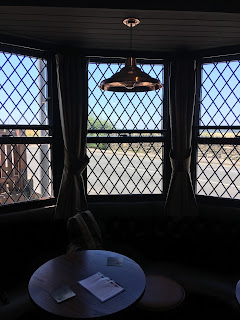 Fair play for Tom for standing us at the right bus stop and the right time to get us back to St Helens.  Google Maps would've advised me something totally incorrect, and I'd probably now be living in Crank telling you all the Red Cat is the greatest pub on earth.

After a lethargic 15 minute trundle back into town and a little trot around the corner, we came to one of those pubs that you suspect is going to be amazing, before you've even crossed the threshold.  Here were some of the reasons why .....

Oh yes, my 'pub of the day' was this calming and ornate classic, though I suspect many of you will, as Dad did, slightly edge towards my 4th pub of the day which I will review tomorrow.   This place had a stillness you felt guilty for disturb, so I crept towards the bar with Tom (who hasn't done anything quietly in his life) and extracted a couple of bar blockers to one side with my BRAPA shaped elbows and was in.  Our brunette hostess had a watery nose & eyes and was slightly unconvincing, but me forgetting how to order Tom a "pint of blackcurrant and tap water ..... NO ICE" didn't help.  The ice comment reminded an old bloke next to us what a warm day it was, and asked her to put some ice in his Erdinger.  Ice in beer, surely unacceptable.  I know a 'dinger enthusiast (DON'T RUSS!), and I can't imagine him condoning such abhorrent behaviour, though it doesn't match the time I saw a young lady getting ice in her Deuchars in the backstreets of Sheffield. And that isn't a euphemism, okay?!  We sat in a raised area facing this amazing whisky cabinet, and Dad continued one of his ongoing themes of the day "waaaaah as long as I can sit on the shady side" like he was some kind of Vampire Pension Expert.  Every bus ride, train journey, pub, walk along a street, he said the same thing.  Top consistency.  But Dad had other issues, just as I had in Trevaunance Cove, he had inherited an old pound coin.  But even worse, a FAKE old pound coin.  After that exciting interlude, we remembered we did have a PURPOSE to our visit, BRAPA isn't all just shits and giggles you know.  No, we had to go through Hull City's fixtures for next season and work out what we wanted to do - this usually ends up with Tom getting us drunk and getting us to agree to do 6 pubs in Kent before Ipswich away and still getting to Portman Road for 3pm.  But we were ready for him this time.  We got as far as December, before deciding this could go on all afternoon and we had three more pubs to get to! 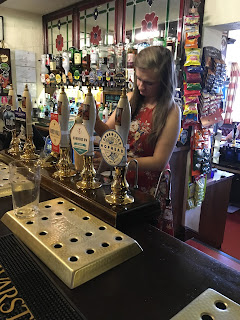 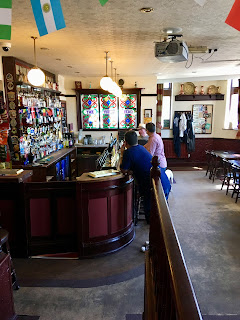 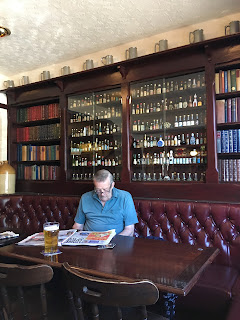 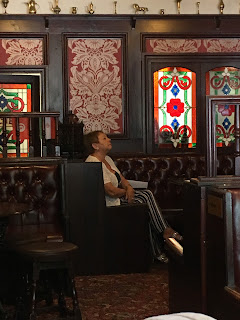 See you all for a hazy part two on Thursday!  I'll give you a day off tmw cos you might be watching the match.  I'm thoughtful like that.