The fact that I'm sat here writing this on 10th July after the Belgians have fallen to the mighty French (and releasing it on 15th July after the buggers have won it!) just shows how behind I've become as a result of that two week pubbing extravaganza in Cornwall and Cambridge.

49 Good Beer Guide listed pubs plus 6 pre-emptives is my second highest total ever, and by gum, was I feeling it by 16th June, needing a full two weeks off to recover!

It all started soberly enough, wading around the Fens with my webbed toes in Ramsey, a place where phone reception doesn't exist, neither do taxis, and I ended up holding court in the front bar with the 'old boys'.  It ended in the Talbot Ale House, St Helens, drunkenly staggering around trying to find the toilets like a Thai twild lost down a mine.


Cornwall was incredible.  Apart from Isle of Man and Doncaster, I don't think anywhere feels more 'foreign' and I had to work so hard for some of the ticks, the sense of achievement was great.  Cambs might've been a step too far but RM was the host with the most, and made life easier than I deserved.


A Fathers day in Birmingham and finishing South Yorkshire for a second time in BRAPA history were other highlights, oh and not forgetting vegan fish n chips with my sister 5 years on! 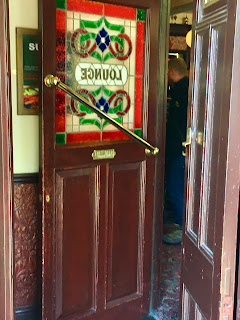 Plenty of other classics, but a few lame ducks as well - my biggest gripe of the month being poor beer quality.  Now, I'm pleased to say, I probably only have two or three instances per year of beer that is bad enough to take back, but I had several instances this month.  I know it has been unseasonably hot, and I'm not even sure that is a good excuse, but I expect better from the GBG.  Beers at Towans Cross x2, the Geldart in Cambridge and the Red Cat in Crank were all vinegar to an extent, whilst other tired pints in Mousehole, the Haymarket in Cambridge and Trevaunance Cove were certainly not up to GBG standard.

I should therefore mention the pubs where the quality stood out, so well done to West Wratting's Chestnut Tree, Palmerston Arms in Peterborough, John Francis Basset in Cambourne, Beerwolf Books Falmouth, Royal Oak in St Ives, Cambs and all 5 in St Helens for serving top pints.


I always say (slightly tongue in cheek) that it is all about the pubs and not the beer for me, but this month I realised that when you are drinking poor quality ale, the twilds are that bit more annoying, the bar blockers are that bit more wankerous, the sleeping drooling doggie is that bit more twoggish, and the barmaid with the tribal midriff tattoo brandishing a food menu is that little bit more judgey.

If June was a veritable feast of pubby activity, July signals a slump.  I know that because I can already tell you that by the 15th, I'll have only ticked off 9 Good Beer Guide pubs.

Boring reasons for this include a lack of cash, hot weather, trains being idiots, work being horrible and sapping all my energy and enjoying the World Cup (the lamest excuse of the lot).

Like a student doing last minute cramming for an exam, there might be a late flurry of activity in the final ten days of June to bring my figures up to a respectable 20-25 mark.

Castor, Whittlesey, Walthamstow, Cleethorpes, Washington .... I'll try and be there at some point if I haven't already!

Cambridgeshire is bubbling away just nicely, like a pot of deep red soup in the Queen's Head at Newton.  Even with the 2019 GBG on the horizon, I honestly think I could be looking at completion by the end of the year.  New Year's Day in Andrewsfield Bar, on a rural Essex airfield anyone?

Cornwall is still in need of much attention.  Next summer, I'll do a more mid-county trip taking in places like Bodmin.

Where to go for my October 'Autumn Special' holiday?  Channel Islands?  Northern Ireland?  Dumfries & Galloway?  Bristol?  London?  Cumbria, would that be weird?  I've considered them all but I'm edging away from all of them and towards Dorset.  It doesn't look easy to the west of the country, but it is an area I have neglected almost entirely.

Tyne & Wear might be finished this month, that'd be canny wouldn't it?

Greater Manchester and Merseyside will live to fight another year, but that doesn't mean I won't chip away at it in the meantime.  I still even have a few North and East Yorkshire pubs that need a visit before that most magical book in the world plops through my letter box.

Derbyshire will officially 'take off' from mid August but rail engineering problems mean it might not be til mid October that I can get down to the likes of Derby and Matlock and Ashbourne.

See you tomorrow for my latest Cambs write-up.